Whether you love it or hate it, you cannot deny the popularity of pocket pistols chambered in .380 ACP.

While .380 handguns have gotten lighter and more reliable than ever, the same isn’t always true for .380 ammo despite advances in handgun projectile engineering over the last thirty years.

Although the market has never been better for quality .380 ACP hollow-point ammunition, finding the right one can be a mixed bag. Some loads give excellent expansion at the cost of adequate penetration, while others give more than enough of the latter without any hollow point expansion. Federal Premium’s recently released .380 ACP 85 grain Punch load is one that flirts a happy medium between those two extremes. 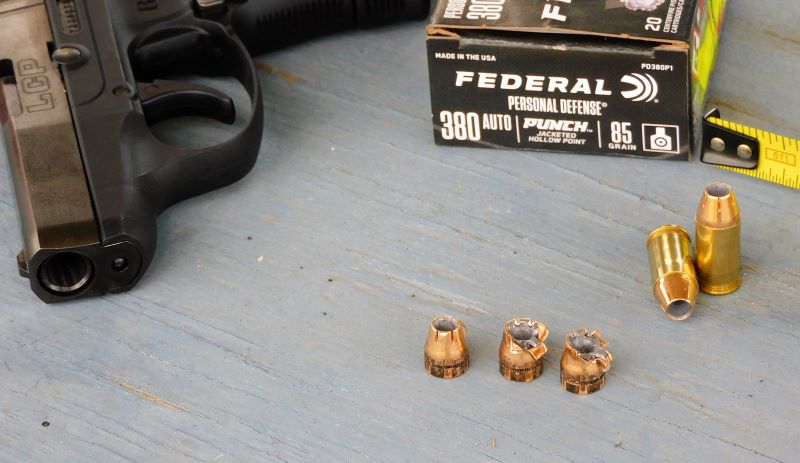 Federal Premium produces a variety of .380 ACP target and defensive ammunition. The Punch features an 85 grain jacketed lead bullet with a shived hollow-point nose. It resembles a more familiar Federal 99 grain HST projectile but with an angular profile. Most .380 ACP offerings use a nominal bullet weight between 90-100 grains, so the Punch’s 85-grain pill is a little light for caliber. As such, Federal advertises the load at a higher rated velocity of 1000 feet per second and nominal muzzle energy of 189 foot-pounds.

The round is loaded in standard brass cases instead of the corrosion-resistant nickel-plated brass that is often used with premium self-defense ammunition, but each round’s case head is kissed with blue primer sealer to wick away moisture.

On the range, I tested the Punch load for function before shooting them through my chronograph to gauge velocity. Finally, I did a quick test in Clear Ballistics 10% ordinance gelatin fronted by a barrier of four layers of denim. For this test, I used a ubiquitous pocket 380—the Ruger LCP that sports a short 2.75-inch barrel.

Little guns like these can be finicky with different types of ammunition and the conical shape of the Punch might hang up on the feed ramps of some pistols. I ran fifteen rounds through my LCP without issue before firing a five-round string over my Caldwell chronograph from a distance of ten feet. The average velocity of that string was 942 feet per second.

From the same distance, I settled down to fire a string through the denim-backed gelatin. One round went through my denim barrier and skipped out of the block while the other three hit home.

Clear Ballistics gelatin, even the remelted and recalibrated type I use, is not a perfect representation of human flesh. Further, it is a bit more dense than conventional organic gelatin and four layers of denim represent an absolute worst-case scenario. Despite that, the lightly constructed Punch load consistently left half-inch stretch cavities in the first eight inches of my blocks before losing energy and taking relatively straight paths into the second block.

One projectile failed to expand but did not pick up any clothing in its hollow point cavity. It came to rest at 17.25 inches. The other projectiles partially expanded, the first coming to rest at 14.50 inches with a slightly opened cavity and the second tumbling down, coming to rest at 15.75 inches. One side of the projectile was peeled outward, with an overall expansion out to a true .380 inch diameter. As lightly constructed as the copper jackets on the Punch are, they resisted opening at these lower velocities.

The Federal Punch is a good, lightly constructed load that should excel with an excellent balance of penetration and expansion in a longer barreled pistol such as Smith & Wesson EZ or a Walther PPK. On the other hand, the load is not so frangible that it breaks apart with little penetration. If we stick to the FBI’s benchmark of 12-18 inches in denim-backed gelatin, this load certainly has duty-cartridge penetration. The Punch also has some expansion potential, unlike some slower and heavier loads.

The State of Vertical Grips in 2022

Five Reasons to Upgrade to an Extended Charging Handle