The Taurus Judge is a gun some love and some cringe at the thought of. It’s certainly a controversial gun, but Taurus sold a ton of them. As an enterprising 21-year-old fresh off his second deployment, I saw one and snatched it up. I still own it, and at the time, I thought it was the bee’s knees. However, as I better educated myself on firearms and shot the thing, I learned a few lessons. Most importantly, I learned that 410 revolvers suck. 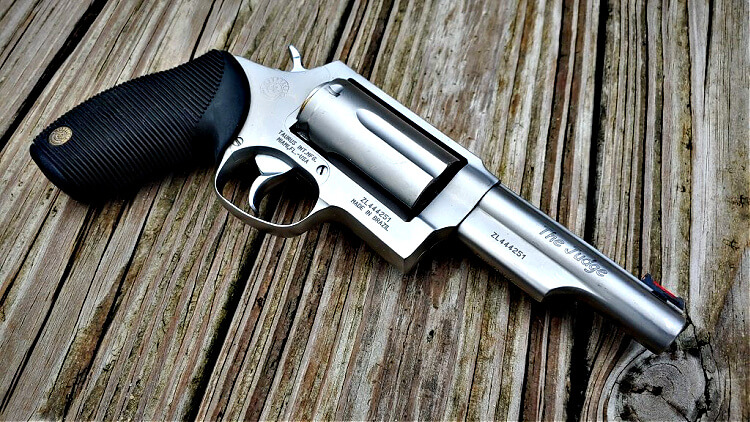 These little fellas can shoot 45 Colt and 410, have rifled barrels, and come in various configurations. The Judge was so popular that it revived 410 ammunition, S&W copied it with the Governor, and specific 410 handgun ammo was even created. Their insane popularity has declined sharply, but millions of these guns are likely still tucked away in gun safes around the country. So why do 410 revolvers suck?

Low Capacity and Lots of Weight

The Taurus Judge is a big gun. It has a chamber that is longer than the barrel in some configurations. It’s also a fat bottom girl and is quite hefty while offering only five rounds of your chosen ammo. The lightest weight model is the Public Defender polymer, and it weighs 28 ounces, empty. For comparison, the SIG P365 offers double the ammunition and weighs 23.6 ounces fully loaded. 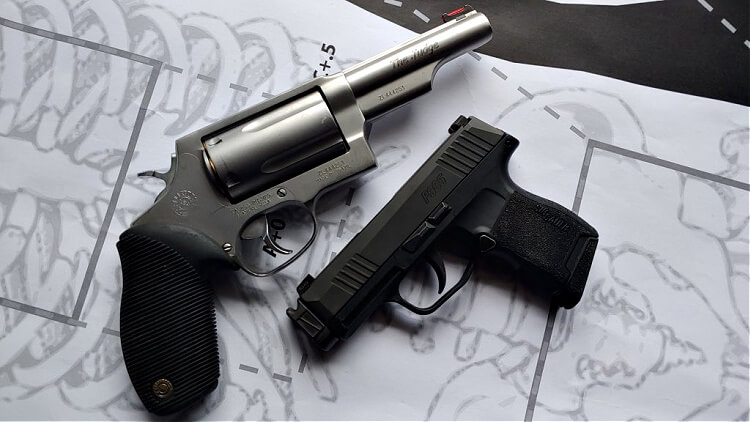 The ratio of weight to capacity is terrible. I don’t mind carrying only five shots, but I don’t want to carry 28 ounces and have only five shots. Let’s not forget the length of the gun as that affects concealment as much as weight. The shortest Public Defender model is 7.65 inches long, making it longer than a Glock 19.

Like a shotgun, fan patterns are everything for me. These 410 revolvers throw inconsistent and sometimes unpredictable patterns. My model is a 2.5 inch chambered with the standard barrel, and I never know how the shot is going to pattern, at least with buckshot. The patterns swing left or right, and flyers are frequent. I imagine the rifled barrel doesn’t do wonders for buckshot patterning.

If you can’t pattern a shotgun consistently, I’d have trouble trusting it for defensive use. I want to know precisely where my loads are going to hit.

With birdshot, it’s just a big splatter of lead on target. At ranges beyond 10 feet, it’s off a man-sized target, but it’s consistent at the least.

Most Buckshot Has Weak Penetration

410 might be a shotshell, but it doesn’t pack the same punch as a 20 or 12-gauge by a lot. The 410 is an anemic cartridge and made even more so from a 410 revolver. Most standard buckshot loads fail to penetrate deep enough to meet FBI standards in ballistic gel. You might be getting three or four pellets, but they aren’t going very deep.

The 410 revolver was so popular that Federal created specialized handgun loads for the round. They admittedly performed a good deal better than most 410 buckshot loads. They were capable of reaching the standard FBI depth but packed a punch of recoil. Hitting a target with multiple projectiles at the cost of recoil has always been the trade-off with a shotgun. 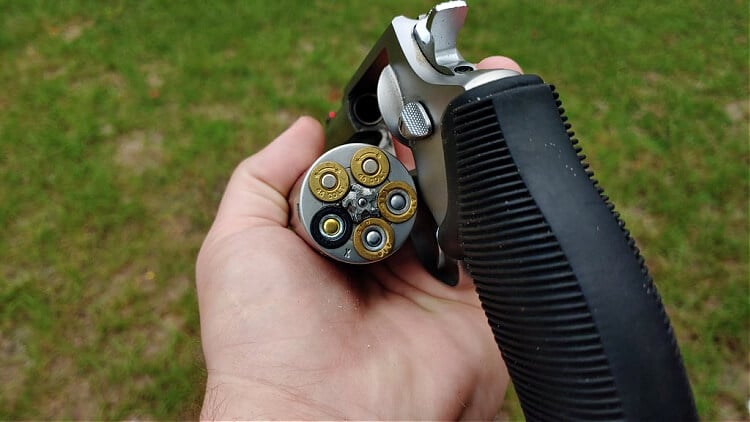 A shotgun should have a stock, which, when combined with proper recoil mitigation techniques, still allows for rapid follow-up shots. 410 Revolvers loaded with these hot handgun rounds tend to drastically slow your ability for a follow-up shot. And don’t forget one-handed shots will be even more compromised.

As the popularity of 410 revolvers declined, so did these specialized ammunition types. I haven’t seen them in stores for years now, and a cursory glance online shows no available stock. So even the loads they work decently with are gone.

The PDX1 410 loads were probably one of the cooler 410 revolver ideas. The Winchester PDX1 loads replaced pellets with circular plates. These plates could engage the rifling and pattern much more efficiently. Behind the plates were 12 bbs designed to increase the likelihood of an effective shot. They sound cool, but there are some problems. 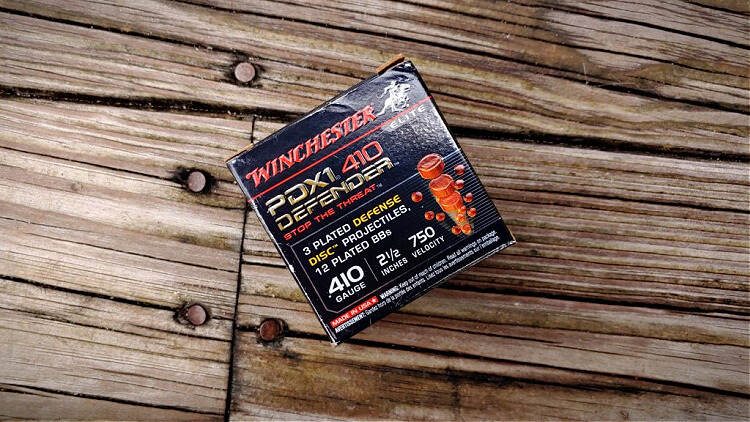 First, like most 410 handguns specific ammo, they are seemingly out of production. Second, according to Winchester, they only penetrate 8 to 10 inches into ballistic gel. Third, the recoil they provided made follow up shots difficult. Lastly, the insistence on loading BBs behind the disks increased the chance of a pellet being thrown off target and hitting someone else.

A shotgun’s range has always been limited, but 410 revolvers are a whole other beast. At 7 yards, you can’t keep a buckshot load entirely on man-sized targets. Your patterns will be ultra-wide, and a pellet is likely to fly past the target. Do you know what happens if that pellet hits an innocent person?

You will be charged for it, likely go to jail, and then be subject to the rightful wrath of litigation with the injured person or, in the worst case, the deceased person’s family. The PDX1 loads worked great with the disks, but those damn BBs seem to go everywhere. 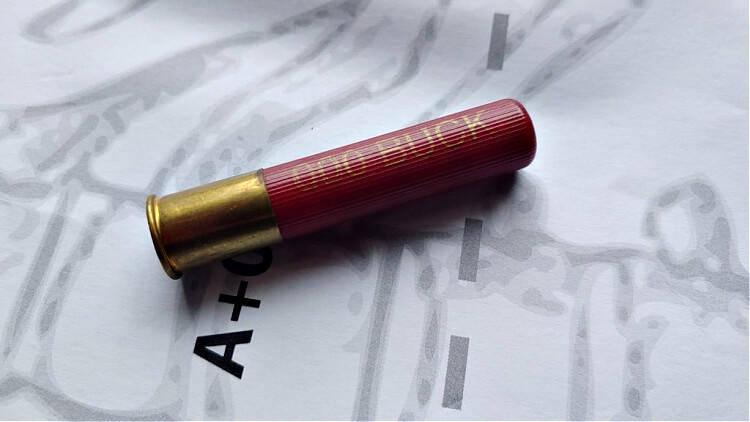 This limits a 410 revolvers effective range with 410 to bad-breath range. It’s a belly gun at that point. If you are concealing one of these big beasts, be aware your loads are going everywhere. Are you using it for home defense? Well, unless it’s at near point-blank, you can expect the same thing.

The most useful thing about these 410 revolvers is that they can also shoot 45 Colt. The classic Colt round is a proven man stopper with lots of oomph. That’s great, and I wish 45 Colt double-action revolvers were more common. 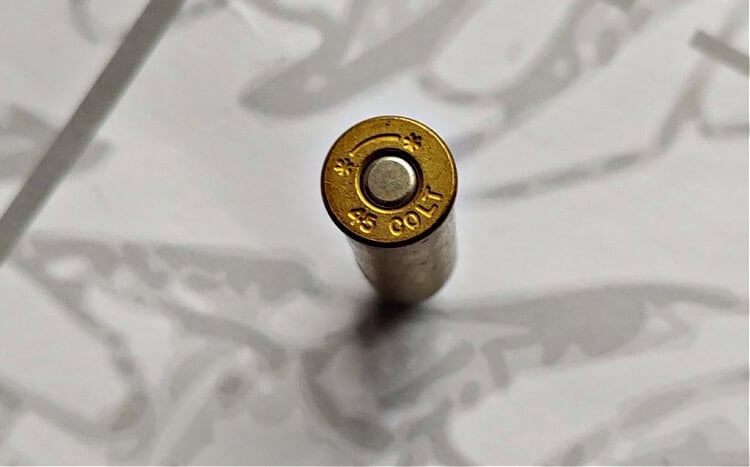 While these 410 revolvers offer acceptable accuracy with 45 Colt, but it’s not great. The 45 Colt has a lot of cylinder to travel down before it hits rifling. This makes it hard to ring out every bit of accuracy from the round. You can create okay groups, but the longer sight radius should give you something a little more precise.

What Are 410 Revolvers Good For?

Well, not a whole bunch in the self-defense realm. It’s as effective as a heavy limb or machete for popping off snakes. There could be an argument for a 410 revolver loaded with a round of birdshot for snakes and 45 Colt for everything else when heading into the wilderness. 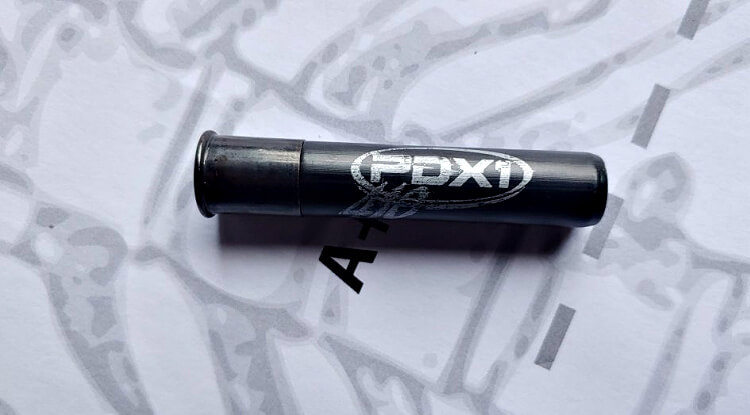 Ultimately, the best reason to own a 410 revolver is the reason why they were so popular. They are fun to shoot, especially when mixed with the right reactive type target. Shooting watermelons, soda bottles, and clay pigeons can be a fun day at the range. They don’t offer much utility but seeing a melon explode still brings a smile to my face.