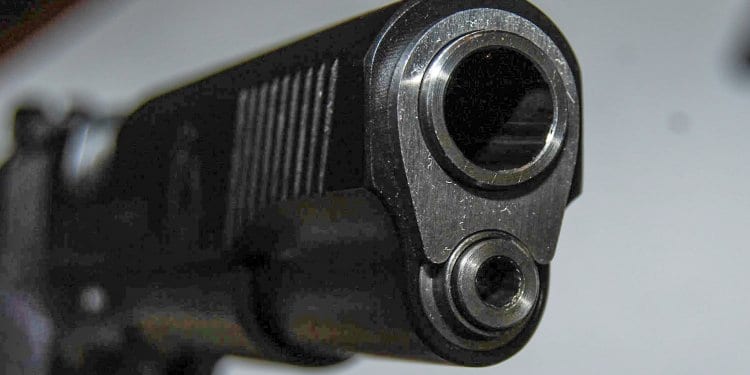 Recently I got my hot little hands on a new Springfield Armory 1911 Range Officer Elite 10mm pistol. Years earlier, I’d bought a similar pistol, a Springfield Armory 1911 TRP pistol chambered in .45 ACP. I’ve always loved that production version of the FBI contract gun, so I was anxious to compare it to this new 10mm. While there are subtle feature differences between the two pistols, the big stuff is the same or similar enough for government work.

Both pistols are steel with G10 grips – made for hard use. The weight is almost identical with the 10mm Range Officer tipping the scales at 41 ounces empty and the TRP at 42. There are some subtle differences in features. For example, the sights are fiber optic on the Range Officer and Tritium on the TRP. Given the slimmer profile of the 10mm case versus the fat .45, you’ll get an extra round in the 10mm pistol. The two included factory magazines hold eight rounds compared to the standard seven in the .45 ACP. 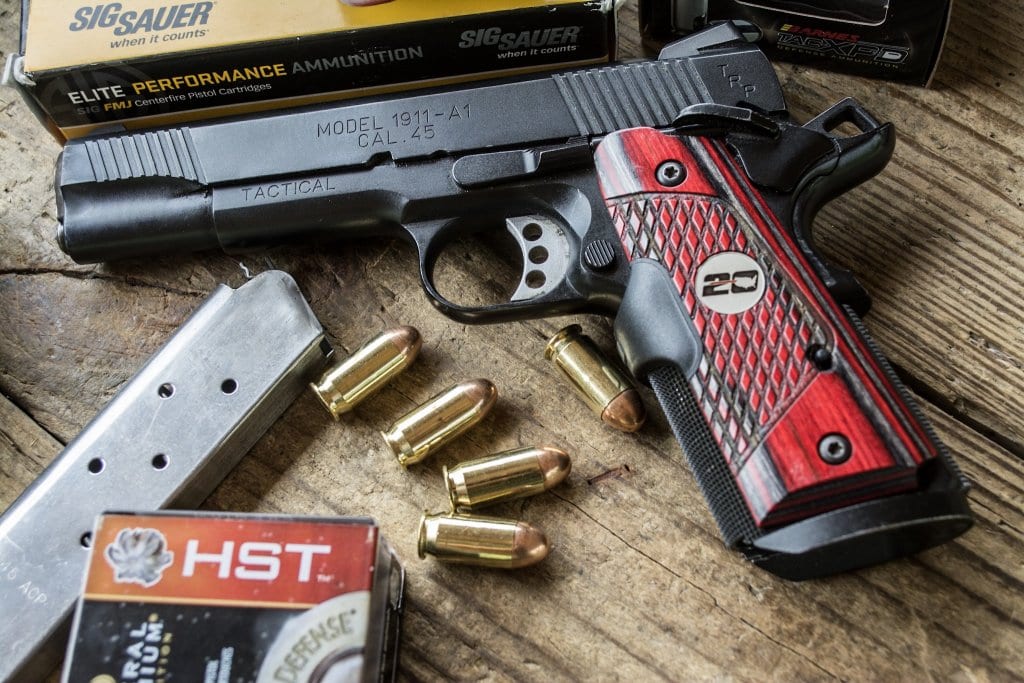 One notable difference between 10mm and 45 ACP is that for these two pistol, you get one fewer rounds in the magazine with the 45.

But what about ballistics? The high-level summary is that the 10mm sways to the lighter and faster projectile while the .45 ACP takes and fat and slow road. Let’s take a closer look using the standard “power” measurements of kinetic energy and momentum. Think of kinetic energy as destructive power, kind of like a drill bit. Think of momentum as a measurement of the ability to move an object.

The 10mm 1911 Range Officer packs 8 rounds in the magazine. The 200-grain hard cast loads on the right provide an interesting outdoors option.

The standard 10mm round uses a 180-grain, .40 caliber bullet although you can find options ranging between 135 and 200 grains. From the Springfield Armory Range Officer Elite 100, I measured most 180-grain loads at velocities around 1,180 feet per second. That combination yields kinetic energy of 562 foot-pounds and momentum of 30.5 pounds-feet per second.

The “classic” .45 ACP load fires a 230-grain .451-inch diameter bullet in the 850 feet per second range. I clocked the Federal 230-grain HST load at 903 feet per second from the Springfield Armory TRP pistol. That delivers 417 foot-pounds of kinetic energy and 29.7 pounds-feet per second of momentum.

To put those numbers in perspective, a 9mm 124-grain load like the Federal Premium HST leaves the muzzle at 1,100 feet per second and delivers 332 foot-pounds of energy and 20 pounds-feet per second of momentum.

To me, and this is a subjective measurement, felt recoil is about the same between 10mm and .45 ACP in similar guns. The 10mm recoil is a hair “sharper” likely because of the higher muzzle velocity, but the overall effect isn’t much different from the .45 version of the 1911. If you do the math on recoil energy, the 10mm cranks out more with 6.27 foot-pounds compared to 5.47 foot-pounds for the .45 ACP 1911.

I have to say the 10mm is kind of growing on me. Getting an extra round of magazine capacity in the classic 1911 platform is an interesting proposition. Whether for self-defense or carrying in the woods, it’s got plenty of juice to get the job done.