There was a time when mag fed shotguns were basically limited to the Saiga platform. Other than that there wasn’t a whole lot out there for those looking for a modern mag fed shotgun. However, times are changing. Nowadays you can’t swing a cat without hitting a mag fed shotgun. Even major shotgun companies like Mossberg and Remington have dropped mag fed shotguns. So what’s the deal with them and why has it taken so long for them to bloom?

The State Of Mag fed Shotguns

Before we dive too deep into mag fed shotguns let’s take a look at the current offerings. I’ve owned a few Saigas myself, and currently, I’ve been having fun with a Rock Island Armory VR 60. Semi-autos and mag feds go together like honey and peanut butter, but these days we aren’t limited to just semi-autos.

Last year Remington hit us with the 870 DM. They took a traditional 870 and shoved a 3 or 6 round magazine in it. Remington has displayed about a half dozen different models of the 870 DM including a TAC-14 variant.

At SHOT Show 2018 Mossberg one-upped Remington with the 590M, a Mossberg 590 that utilized a box magazine as well. The difference being the 590M series utilized a double stack magazine and offered 4 different capacity levels for the model. This includes capacities of 5, 10, 15, and 20 rounds. The magazines are surprisingly smooth feeding but absolutely massive. They just recently announced a Shockwave variant as well.

Outside of that, we’ve seen more and more semi-auto shotguns arrive in a variety of configurations, with tons of magazine options available. Turkey seems to have really loved the magazine fed shotgun and we are seeing a lot of mag fed shotguns come from there.

The Advantages of Mag Fed Shotguns

The first advantage is obvious, it’s more intuitive and even quicker to reload an empty shotgun. Reloading a shotgun properly takes a lot of training and practice, slamming a magazine home doesn’t. Magazines can also offer higher capacities than magazine tubes without the gun being ridiculously long. 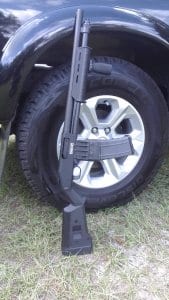 If someone is already a rifle shooter than they are going to find it much easier to reload with a magazine than work the tube. It’s also nice and easy to carry extra magazines in modern tactical gear than to carry shotgun rounds. Carrying extra shotgun ammo has also been a challenge, especially when trying to carry it in a secure and quick to access manner.

The Disadvantages of Mag Fed Shotguns

The first is losing the ability to quickly top off a gun. One of the best things about a tube magazine is the ability to keep it loaded all the time. If you have a lull in the fight you top off the tube. Shoot, load, shoot, becomes a familiar pattern if you are proficient with a shotgun.

One of the big strengths of shotguns is their versatility and that comes from the wide variety of ammo you can use with them. With a standard tube fed gun it’s very easy to swap to slugs or specialty rounds like breaching rounds. It’s a little tougher to do that with a magazine fed shotgun.

Another issue is less to do with operation and more with logistics. In my experience, you can’t leave a shotgun magazine loaded for a long period of time without some complications. This isn’t mag related, but ammo related. The top round of ammo tends to deform when being inserted in the gun with a closed bolt. The pressure from the magazine spring and ammo shoves it upward against the bolt, and the plastic hull will slowly deform.

This can cause failures to feed. If the magazines are left outside of the gun I’ve yet to see this problem develop.

As we step out of that professional and fact-based space we slide into a space more occupied by experience and opinion. In my experience with these guns, the biggest weak point seems to always be the magazine. Not the concept of a magazine, but the actual physical magazines.

This is especially true on the foreign made magazine fed shotgun’s I’ve tooled around with. Saiga magazines, in particular, seemed to be hit or miss. The magazines themselves are obviously quite large and do make the gun a bit more bulky compared to a tube fed design.

As a big fan of shotguns, I really do prefer the ability to shoot two, load two, etc. Shotguns aren’t weapons used to suppress a target or to provide a lot of fire. With a tube, I can essentially never run dry as long as I remember to keep loading the gun.

This all being said I believe the mag fed shotgun can be a valid concept and does offer an overall simpler platform for shooters to learn the shotgun on. Plus they are fun, and fun matters. Mossberg and Remington both seemed to have made robust shotgun magazines, so maybe the main weakness of these guns can be addressed.

The Changing Face of Shotguns

Without a doubt, shotguns are some of the most powerful close quarter’s weapons we have. The new fascination with magazines seems to be attempting to make shotguns into high volume of fire weapons. This does make them more rifle like than shotgun, and both police and civilian shooters have adopted the rifle over the shotgun for most roles these days. This trend may make shotguns more accessible to shooters more familiar with rifles.

I don’t think we’ll see mag fed shotguns replace standard tube fed shotguns anytime soon. If I’m wrong and these guns take off we’ll certainly see an interesting new shotgun doctrine become mainstream. For now they are a development worth watching, and personally, if Mossberg makes a mag fed 930 I’m not sure I could stay away.

What do you folks think about the new trend of Mag fed shotguns? Is it here to stay? Or just a passing fad?

11 thoughts on “What’s the Deal With Mag Fed Shotguns?”