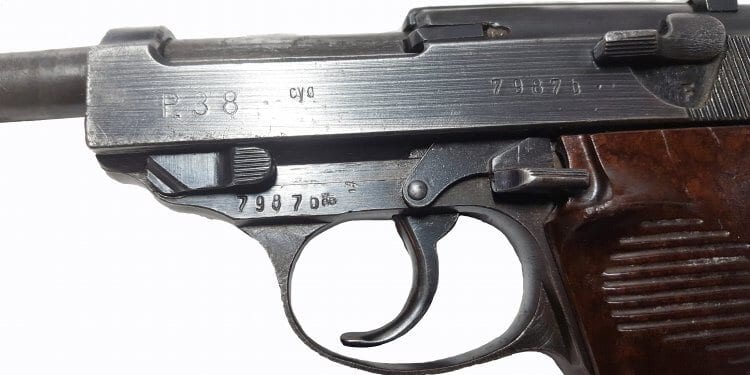 When most people think of World War II German pistols (assuming they think about such things at all) the first thing that usually pops up is the famous P08 Luger — and with good reason. The Luger is a sexy little beast that’s achieved iconic status with shooters and collectors the world over. It’s certainly more commonly discussed than the Walther P38. Even the standard 9x19mm round that most of us use (at least some of the time) is commonly called “9mm Luger.”

No doubt the Luger is a finely engineered piece of firearms technology. The problem was, it was too fine. 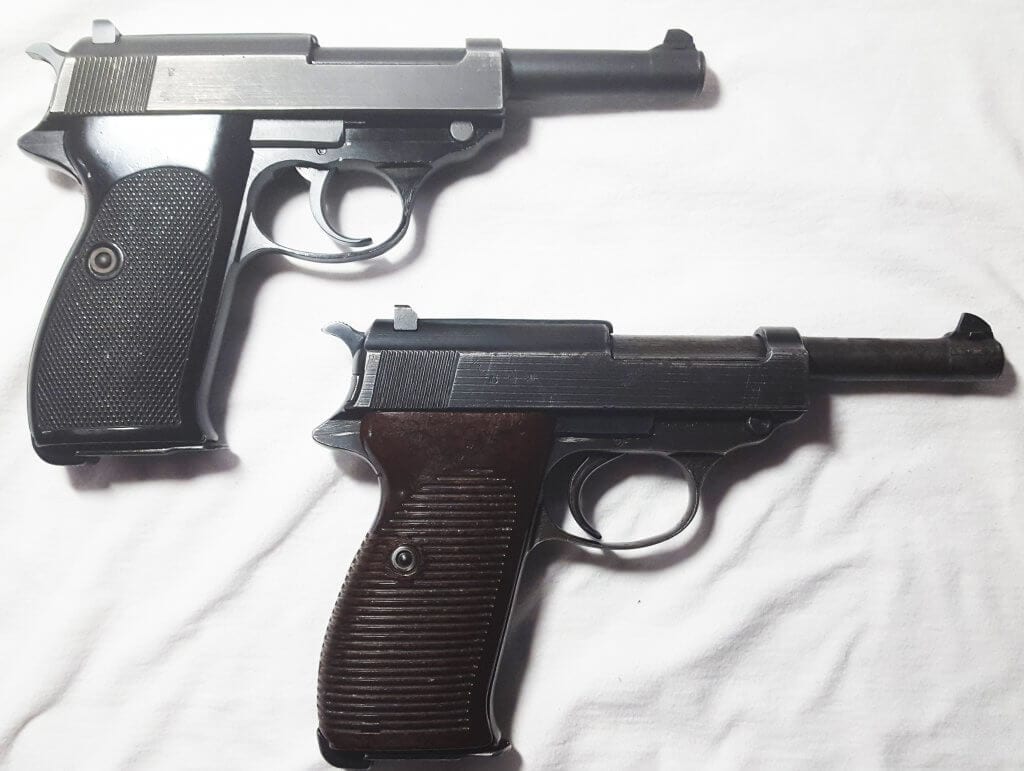 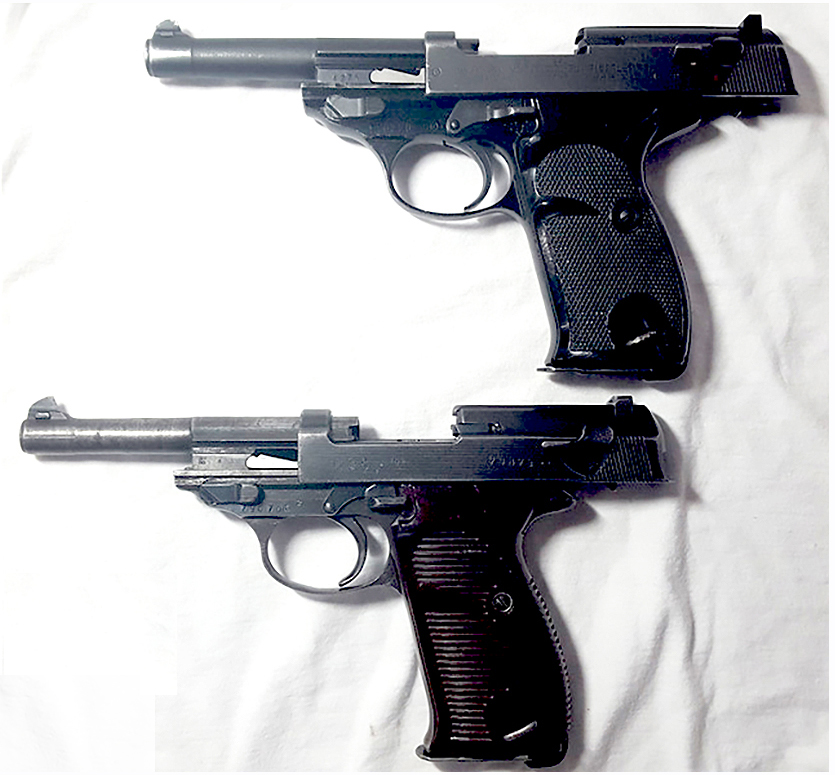 Lugers were the standard-issue sidearm for the German military from their adoption in 1909 until 1938. They fought the Great War and saw the Nazi rise to power. But damn were they expensive to build, and a pain in the ass to maintain in the field. When Adolf Hitler began the massive rearmament of Germany in 1935, equipping the new Wehrmacht with Lugers was cost-prohibitive, to say the least. On top of that, the tolerances on the Luger were so tight that even small quantities of dirt or mud would cause them to jam, which isn’t exactly ideal when one’s life might depend on the functionality of one’s sidearm. Clearly, the time had come for the Luger to be replaced. 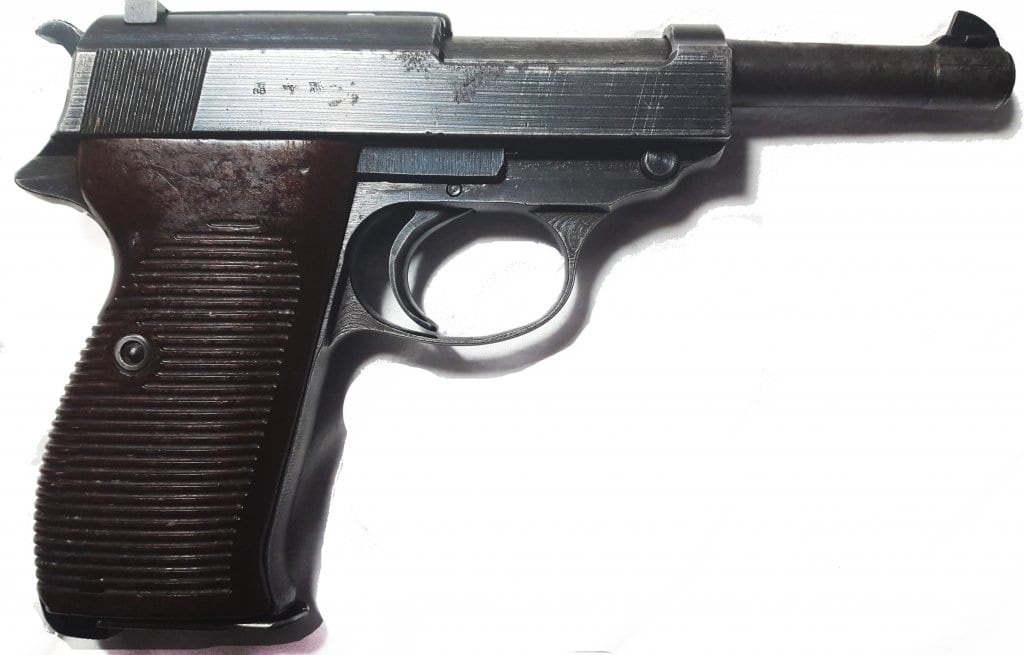 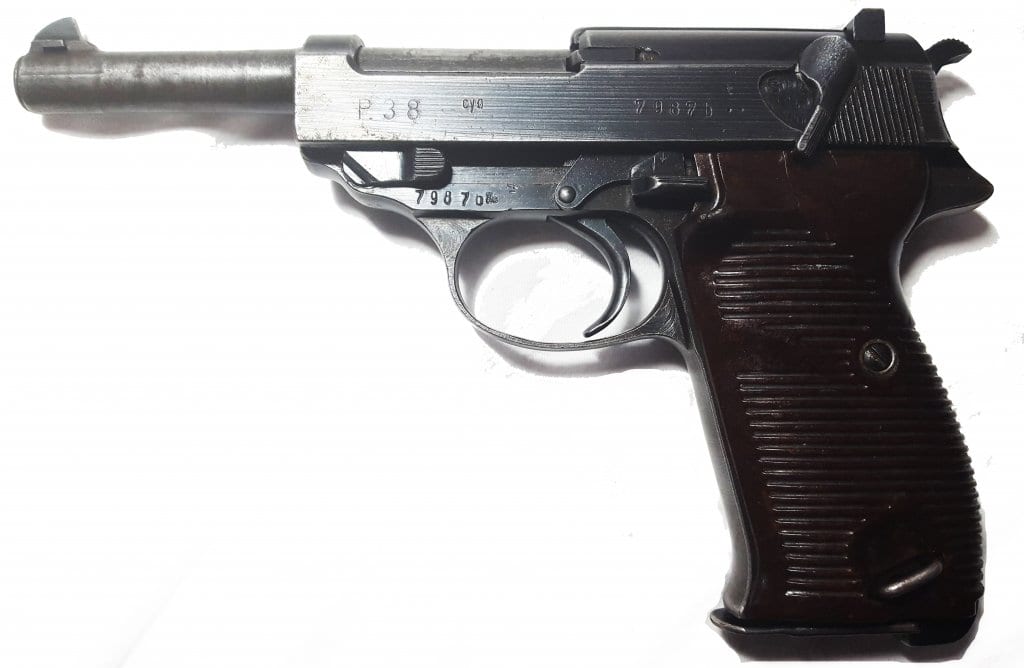 Fortunately, the Carl Walther company had been experimenting with a new pistol designed as a service weapon for the police and military. Walther had seen some success with its PP line of duty pistols, and decided to kick it up a notch and develop a full-size sidearm for the army. Work on the design began in 1932. Six years and several prototypes later, the result was the soon-to-be iconic-in-its-own right P38, a design that was literally years ahead of its time.

The P38 was the standard-issue sidearm of the Wehrmacht throughout World War II. Thanks to insatiable demands on German industrial capacity, plenty of existing Lugers saw service as well. The demand for the P38 was so high, in fact, that the Walther plants couldn’t keep up, prompting contracts for the guns to be let to both Mauser and Spreewerk. The P38 pictured here is one such contract gun. It’s a 1943 Spreewerk product that was brought home from the war by the grandfather of one of my closest friends. She was kind enough to loan it to me for this article (thanks, Wendy).

The P38 was far more reliable than the Luger and could be economically mass-produced. The P38 design was years ahead of its time. In fact, anyone familiar with the US Beretta M9 service pistol will notice many similarities between the two. The P38 is a hammer-fired double/single-action setup with a falling block locking mechanism. In fact, the M9 locking system is almost identical to the P38, which is revealed by a side-by-side comparison. Other similarities include the rotating takedown lever on the frame and the hammer-drop safety. The M9 improves on the design with an ambidextrous safety.

This is an entirely different sort of WWII era P38.

The P38 also features a loaded-chamber indicator just above the hammer. It’s very visible in daylight and easily felt in low light or darkness. In my opinion, it is clearly superior to that of the M9. I also like the ergonomics of the P38 better. It’s admittedly a matter of personal preference, but the Beretta feels like a slab in my hand. The P38, with its more-pronounced palm swell, fits perfectly and is very comfortable. Despite its steel construction, the P38 comes in at 28.2 ounces, unloaded, versus 33.9 for the M9.

Does this mean I think the P38 is superior to the M9? No, although I’m an unapologetic Walther fanboy (except for the PK 380). I’m merely demonstrating what a great weapon the Walther was (and is), especially considering its 80-year old design. 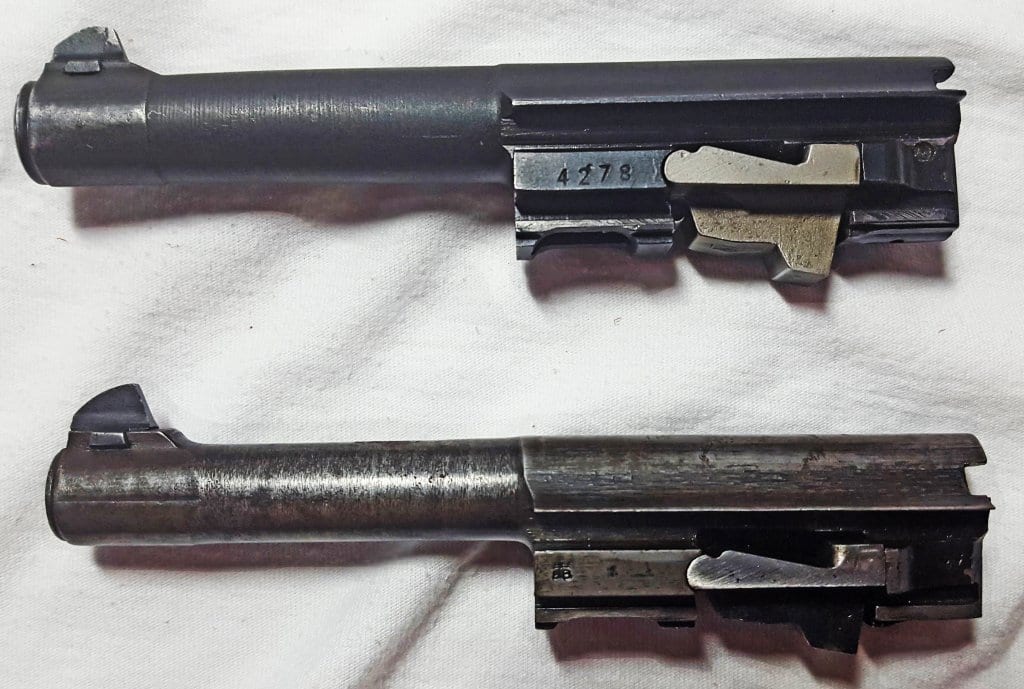 Once you get into the guts of the two weapons the differences become more pronounced, with the most noticeable being the recoil springs. Obviously, the M9 wins the capacity battle hands down, with 15+1 versus 8+1 for the P38. In addition, the M9 is rated for +P loads where the P38 is not. The P38 is one of my favorite weapons and I wouldn’t hesitate to stake my life on its functionality, but it’s dated. Better options are out there, including the Beretta. 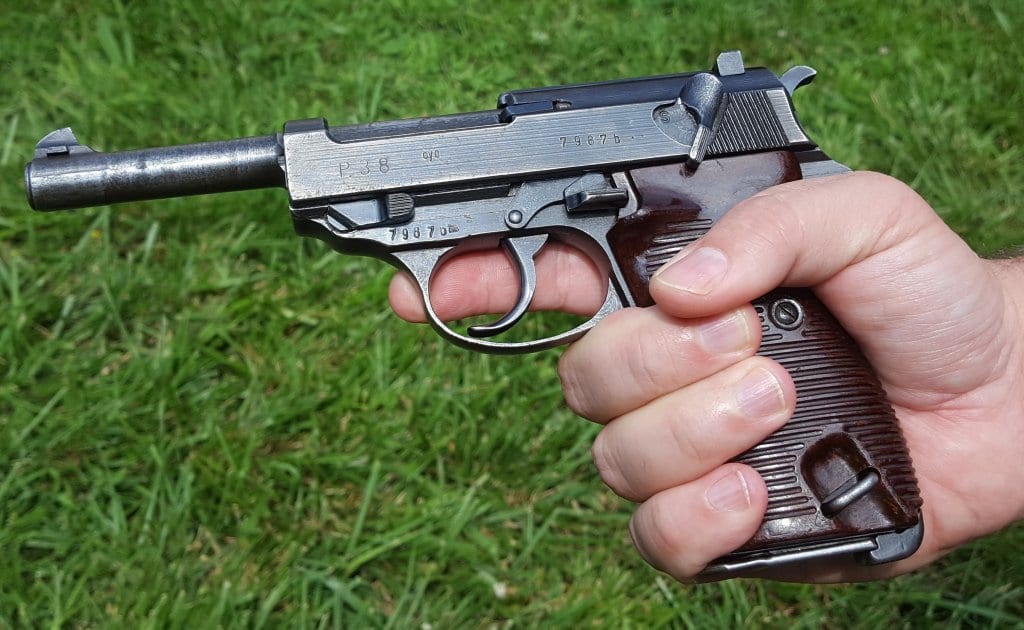 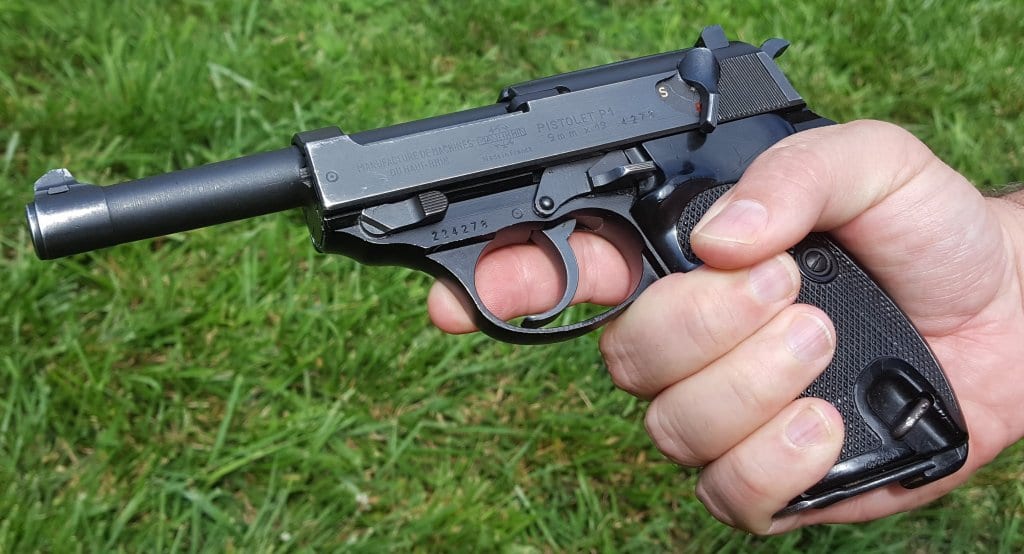 Immediately after the war, Germany wasn’t allowed to produce weapons of its own. But the new West German police forces and, beginning in 1955, the new Bundeswehr, needed a sidearm. The plethora of P38s still around, plus the proven design quality, made the choice of that sidearm very easy indeed. 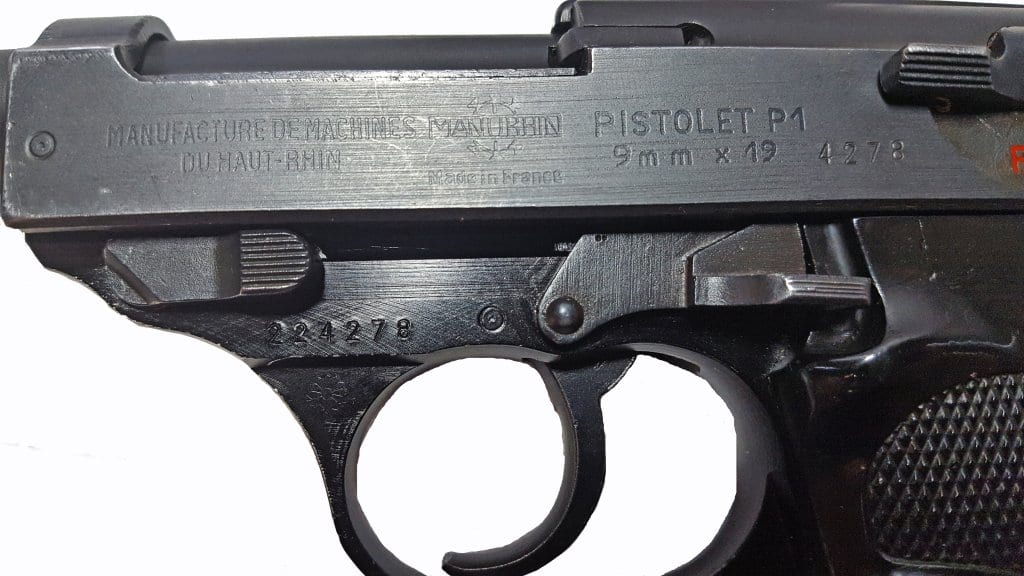 The initial production run of new pistols was marked “P38” but, for reasons unknown (at least to me) the firearm was reclassified as the P1 in 1956. 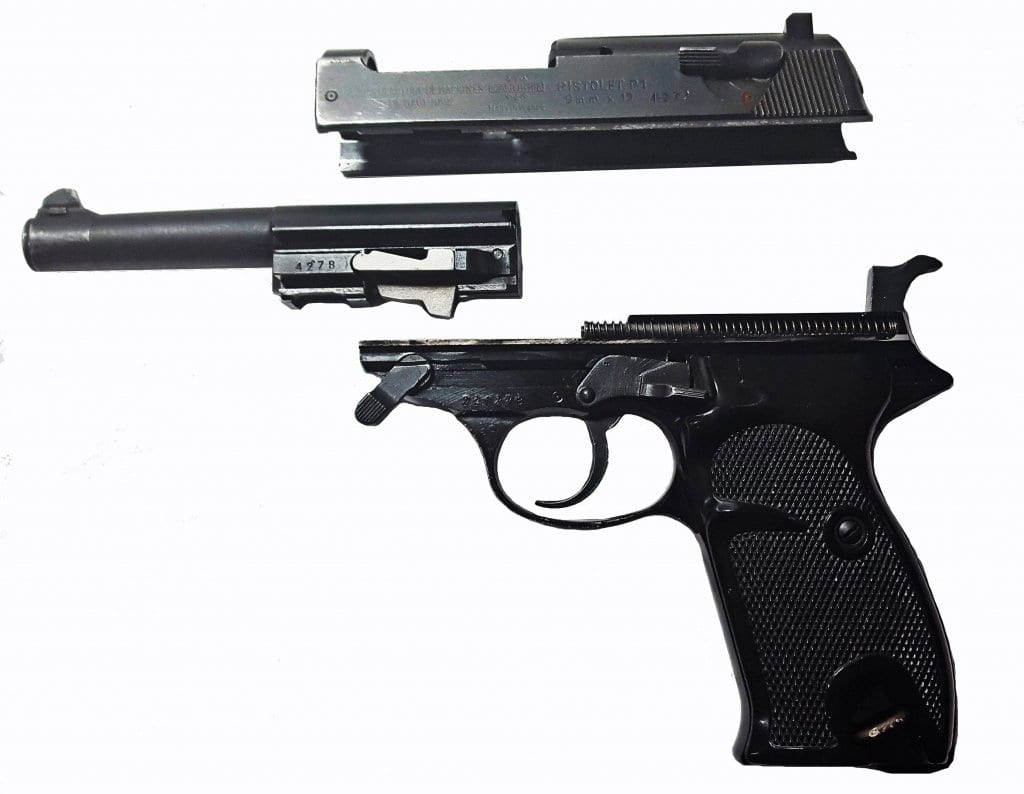 An interesting batch of P1s was made for the West Berlin Police. Those pistols were produced under contract in France by Manurhin. At least, that was the story to satisfy the Russians, whose occupation zone surrounded Berlin. It seems the Reds, at that particular juncture, were dead-set against any German-manufactured weaponry being used by West Berlin institutions. Of course, the Russians of the 1950s did have a pretty good reason to still be pissed at the Germans. So the frames were made by Walther in Ulm and shipped to France, where the Manurhin markings were applied. They went to West Berlin from there. No doubt the Reds knew all this, but it kept up appearances. 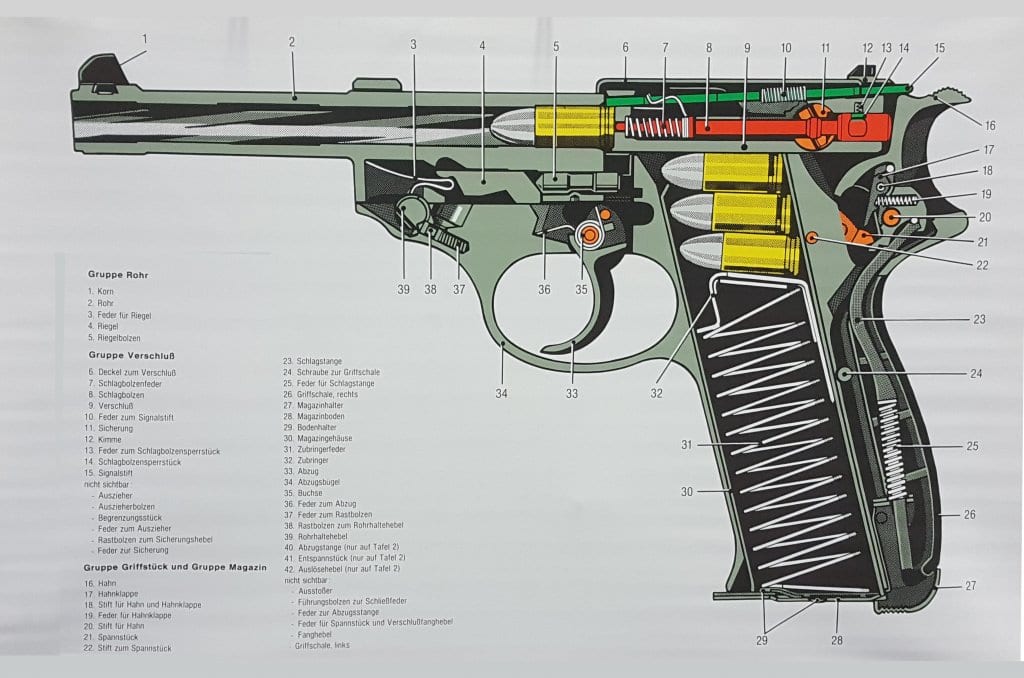 Functionally the P1 is identical to the P38 in every way, but P1s have aluminum alloy frames instead of steel, making them noticeably lighter. The P1 pictured here, which is my personal weapon, is from the Manurhin contract. They are stamped with the Manurhin factory logo and either “France” or “Made in France.” The left side of the trigger guard is stamped with a rosette denoting the West Berlin Police force. 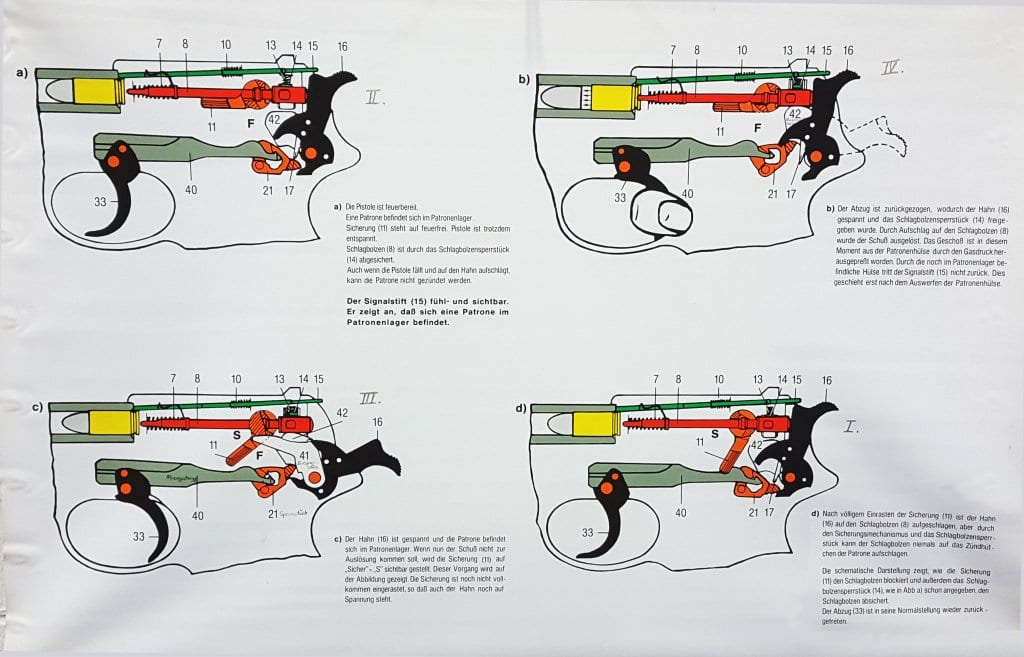 Another interesting feature of the Manurhin contract guns is that the slides were of wartime manufacture. Postwar slides, manufactured by Walther, were thicker and sturdier. They can be identified by the serrations forward of the decocker. The wartime slides are only serrated behind the decocker. The slides stamped “Manurhin” came from a contract the Nazis let to build P38s for Portugal, identifiable by the small crossed cannons stamped on the right side. The war ended before the contract could be filled, leaving the slides available for later use. Later Walther-manufactured P1s also features a hex bolt in the frame designed to strengthen it against cracks caused by prolonged use. The Manurhin guns do not have that hex bolt. 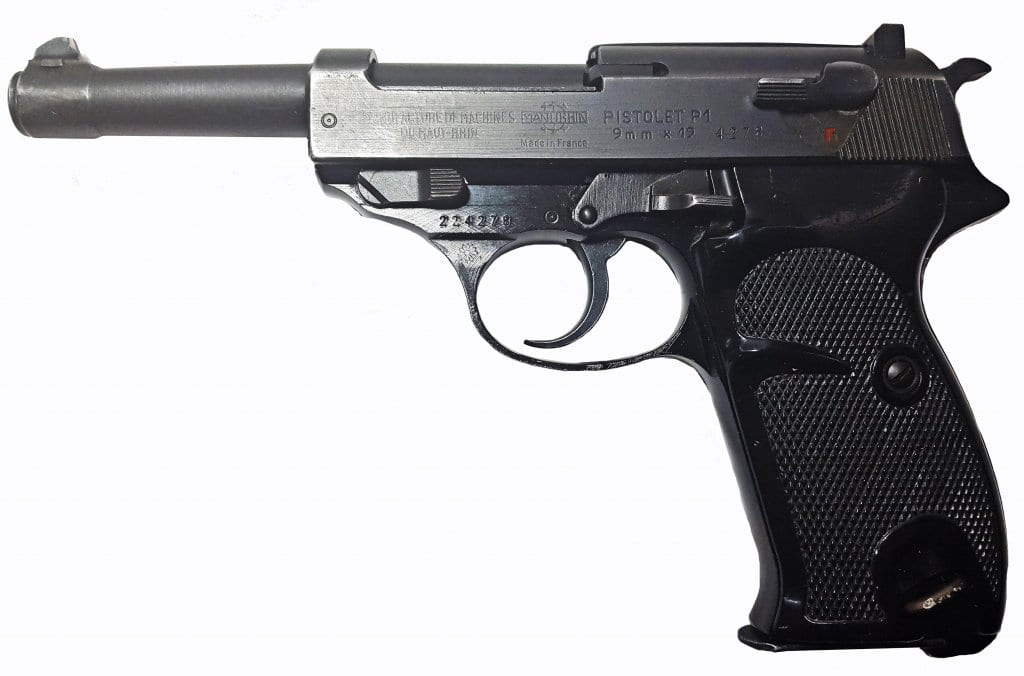 Authentic leather flap-holsters are available for the P38/P1, and some of the guns come with them. The holsters are sturdy and well-made and come with a pocket for an extra mag. Mine is showing some wear, but it’s still in great functional shape and will last for years to come. It’s a cool accessory if you can find one.

So, what about the gun itself? I bought my P1 at a gun show in 2010. I picked it up on a whim, not really knowing much about it. It was priced at $350.00, complete with holster, and I thought it was cool. I got it home, pulled up the interwebs, found a great site called p38forum.com, and started learning. The smoothness of the action and solid feel of the weapon were fantastic, and I started to really like my impulse purchase. I took it to the range the next day, and I was hooked. It was comfortable, accurate, and just pointed naturally for me. That was the first day of my Waltherphilia and led, eventually, to the Walther PPQ becoming my EDC sidearm. 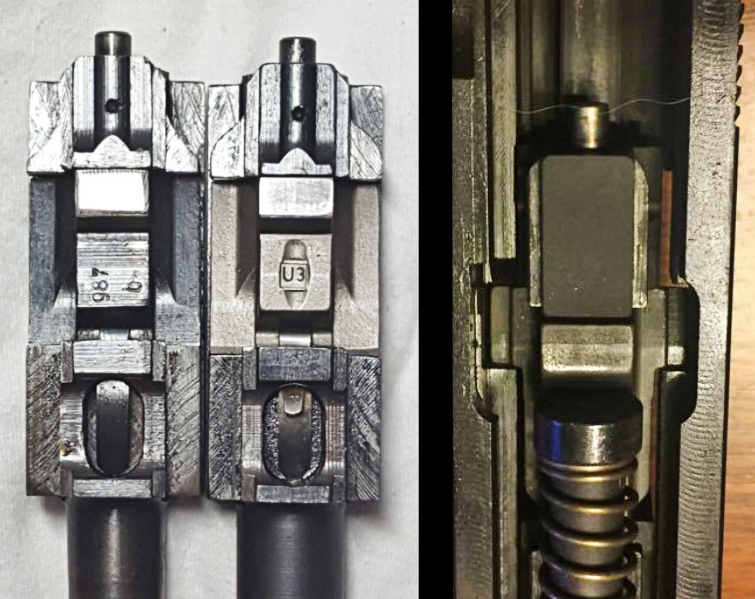 The P38/P1 utilizes a hammer fired falling block mechanism. Here you can see the P38 (left), P1 (middle) and Beretta (right) for comparison.

The P38/P1 is hammer-fired with a falling block locking mechanism. It features a hammer drop safety/decocker on the left rear of the slide. There’s a prominent loaded-chamber indicator just above the hammer. The extractor is on the left side of the slide. One of the first things you’ll notice when firing the P38/P1 is that the rounds eject to the left and, occasionally, straight up. Eye protection is always a good idea, but it’s an absolute must with this weapon. Ejected brass has hit me in the face more than once.

Another unusual feature of the gun is the frame-mounted twin recoil springs. They look puny, but the recoil is no worse than a modern 9mm. If you pick up one of these guns, it’s a good idea to check the springs for wear. They are available online for 12 to 15 bucks and are a snap to replace if necessary.

The sights are a high-profile notch and blade setup that makes target acquisition a breeze. The front blade can be drifted for windage. The trigger guard is roomy enough, though bulkier gloves can make things difficult. The trigger itself is about what you’d expect from a surplus weapon. The two examples here have some play in both the DA and SA modes, with the DA obviously having a longer pull to the break. The break itself is fairly clean, but no one will confuse it with the better modern triggers. They’re surplus warhorses and will likely vary from gun to gun. 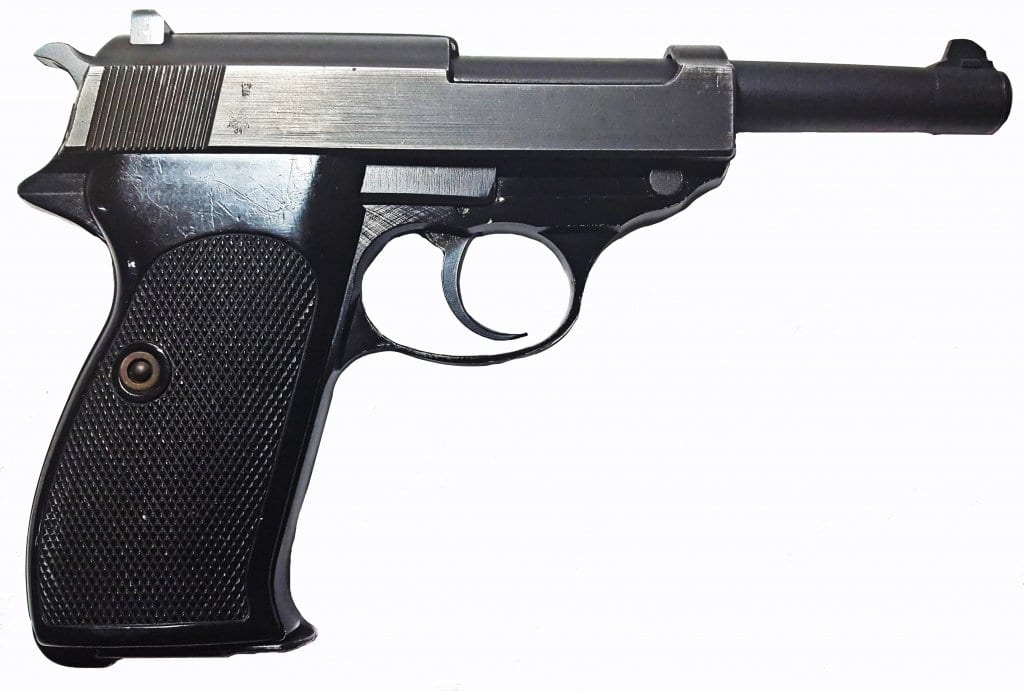 The grip is very comfortable with a slight palm swell and large beavertail. The grips themselves are either bakelite or plastic. In the two examples in the photos, we have one of each. The P38 has the brown bakelite grips and the P1 features black plastic. Of the two, I prefer the checkered plastic. There’s a prominent lanyard ring near the heel. Finally, the mag release is located on the heel of the weapon, just below the lanyard ring. Takes a little getting used to, but it’s surprisingly intuitive, at least for me. But I’ve never liked the button release anyway, so there’s that. 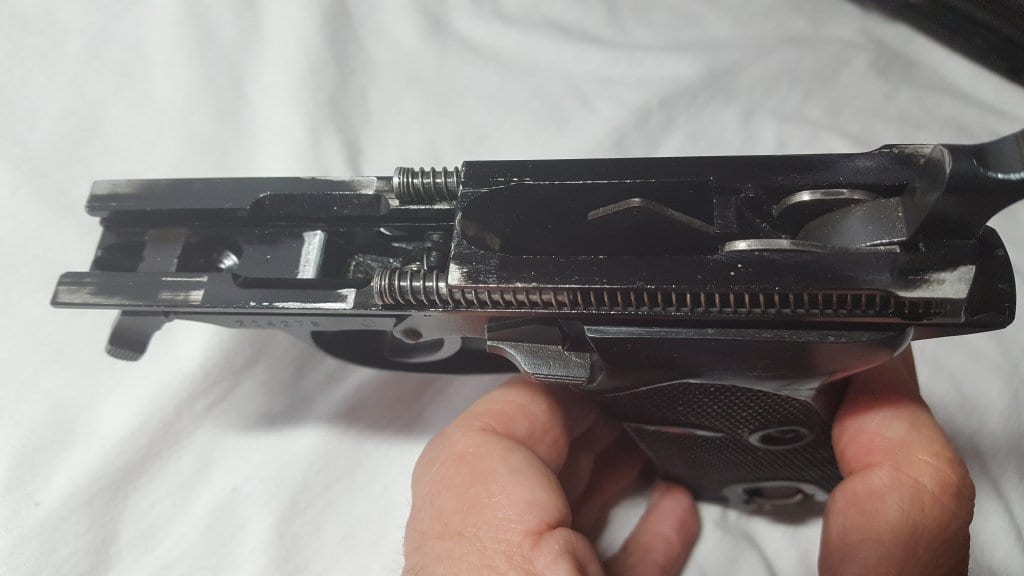 The primary drawback to the P38/P1 is magazine capacity This is a full-size pistol with a single-stack 8-round mag, not nearly up to standard for a modern 9mm pistol. The heel mag release precludes the possibility of extended mags, but they really wouldn’t be practical anyway, considering the size of the gun.

Beyond that the design doesn’t lend itself to concealment, with an overall length of 8 ½ inches, a height of 5 ½ inches, and a thickness of 1 ½ inches, counting the decocker. The decocker and slide release are also prominent, with sharp angles ripe for catching on clothing.

Great gun, but if I had to carry it, I would do so openly.

The P38/P1 is readily available online and I see them fairly often in pawn shops. The price on prewar and wartime P38s has risen rather dramatically over the last few years, with prices ranging from $800 to well over a thousand bucks. But if you’re just looking for a fun pistol, the P1 is the exact same thing, only it’s a little lighter thanks to the alloy frame. P1s can be found in the 450 to the 750-dollar range and, since they were manufactured into the 1980s, many are in very good condition.

It’s a quality firearm with a design that has stood the test of time. Pick one up. You won’t regret it.

You can — and should — read more about the P38 on the C&Rsenal website. It is a superb resource. Then there’s also Forgotten Weapons, of course. Many of us support Ian’s efforts on that site. Go. Go get your learn on! 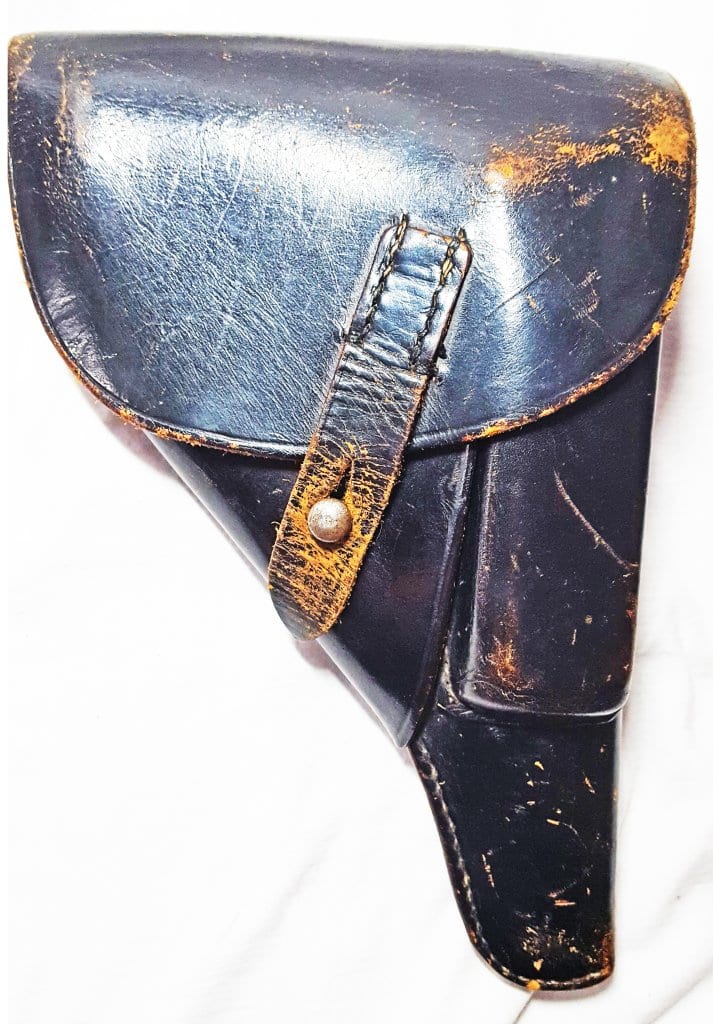 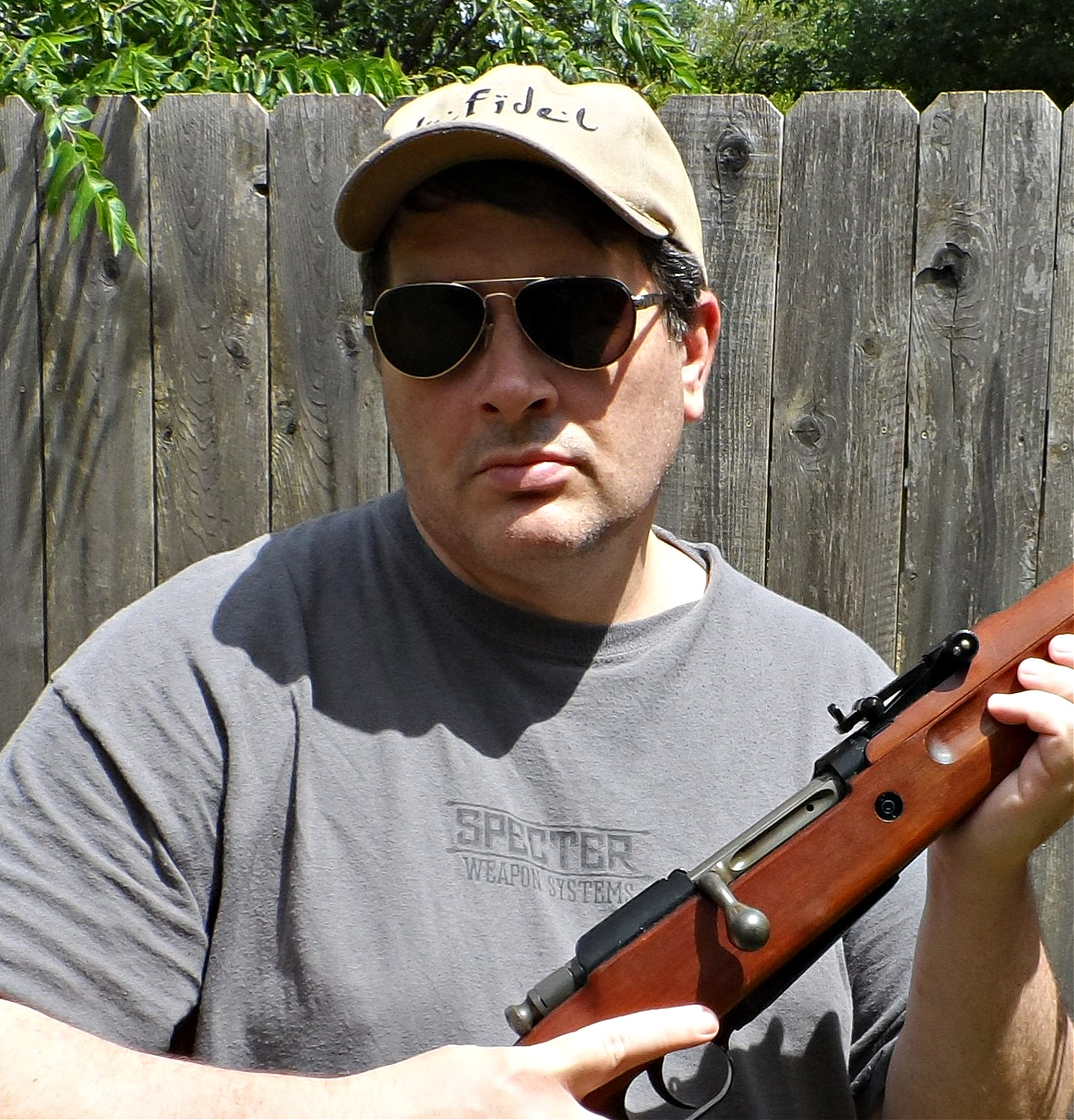 Bucky Lawson is your typical Appalachian-American gun enthusiast. He is a military historian specializing in World War II and has written a few things here and there, including some stuff for Breach Bang Clear. He likes dogs and enjoys a good cigar and an Old Fashioned with an extra orange slice.