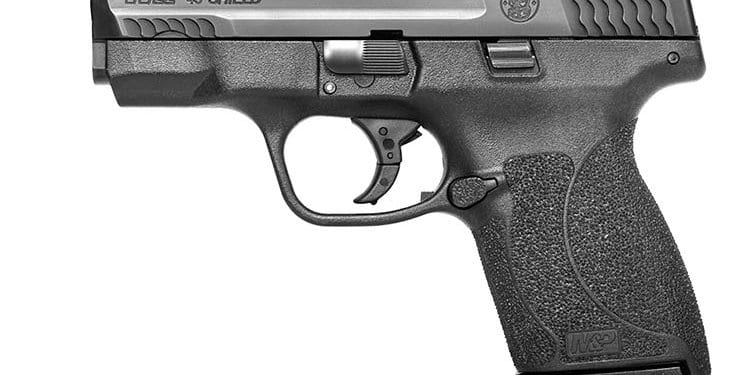 Earlier this year, Smith & Wesson made a move that pleased a lot of shooters: the company introduced the .45 ACP cartridge to the Shield line.

Without a doubt, the M&P Shield series of handguns has been one of the biggest success stories in recent history for the august company. When the line was first introduced in 2012 at the National Rifle Association’s annual expo, it was met with a great deal of praise.

Initially offered in both 9mm and .40 S&W, the company expanded the line to include a pair of .45 ACP versions this year. One model has an external thumb safety, while the second does not.

The larger caliber is not the only update to the new pistols. Smith & Wesson also upgraded the grip texture to a more complete frame stippling for a better handhold when shooting. Additionally, the company also added front cocking serrations to the slide.

As with the existing line, the new M&P45 Shield comes with a pair of magazines. One is a flush fitting magazine that holds six rounds. The second is an extended magazine that holds one additional round for a total count of seven plus one in the chamber.

The extended magazine is one of the major improvements to the .45 pistol that few people have noticed. Original 9mm and .40 caliber pistols used a floating sleeve over the body of the extended magazine to fill the space between the floor plate and the pistol body. I found two problems with this:

Simply removing the sleeve on the original extended magazines increases the likelihood of damaging the gun’s ejector, a problem documented in at least one training class that I am aware of. So that was not a satisfactory solution. 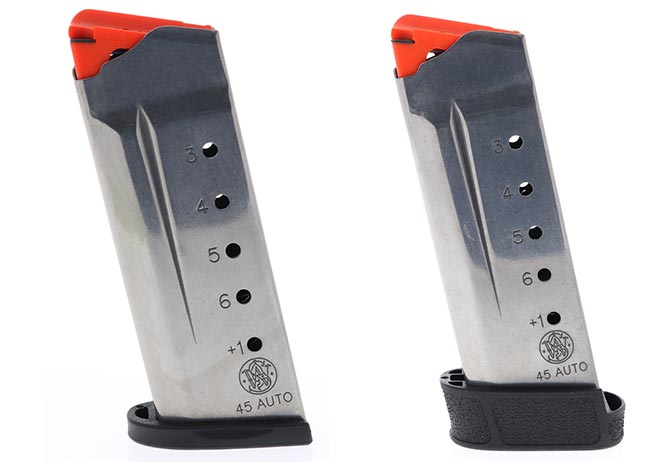 Smith & Wesson redesigned the magazine configuration for the M&P 45 Shield. To start with, both the flush fitting and the extended magazines use the same metal body. That’s why you will see a witness hole labeled +1 on both magazines.

To squeeze an extra round into the longer mag, the company designed a new +1-style floorplate. The design eliminates both of the problems associated with the previous floating sleeve design: it inserts easily and drops free.

As with all semi-automatic pistols, one of the primary failure points is the ammunition feeding device. In normal circumstances, magazines do not have the same lifespan as the rest of the gun. That’s why it is important to pick up additional magazines to feed your pistol. Keep the newer ones for carry while the older ones can be used on the range. You can purchase standard capacity magazines here and the +1 capacity magazines here.