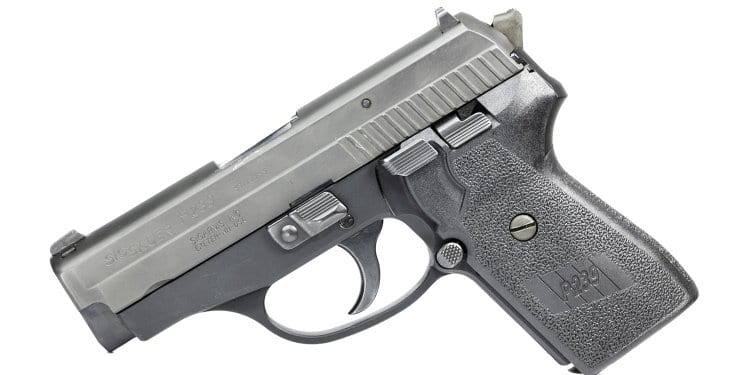 I was a long-time fan of SIG’s all-metal handguns long before the introduction of the P239 pistol. Developed in response to American civilian’s need for compact, concealed-carry pistols in full-power calibers, the P239 was initially fairly popular.

While large and overly-heavy by today’s standards, in the mid-90’s the P239 was SIG’s smallest, lightest offering chambered in a military cartridge. Their next closest pistol being the P232, a direct-blowback handgun chambered in .380 ACP and .32 ACP. The P232 was actually longer than the P239, and nearly as heavy.

The P239 saw reasonable commercial success until a few short years ago, when lighter, higher-capacity polymer-framed pistols rose in both popularity, and availability. Truth be told, it’s hard for an all-metal, single-stack design like the P239 to compete with modern offerings not just from competitors, but from SIG itself.

This ultimately lead to the gun’s discontinuation in 2018, but before we get into that, let’s first explore all the features of the P239.

The SIG P239, is a locked-breech, magazine-fed, semi automatic handgun chambered in 9mm, .40 S&W or .357 SIG. It feeds from single-stack, phosphate-coated magazines. These mags hold either eight or ten rounds in the 9mm version, or seven or eight rounds in both the .40 S&W and .357 SIG models. 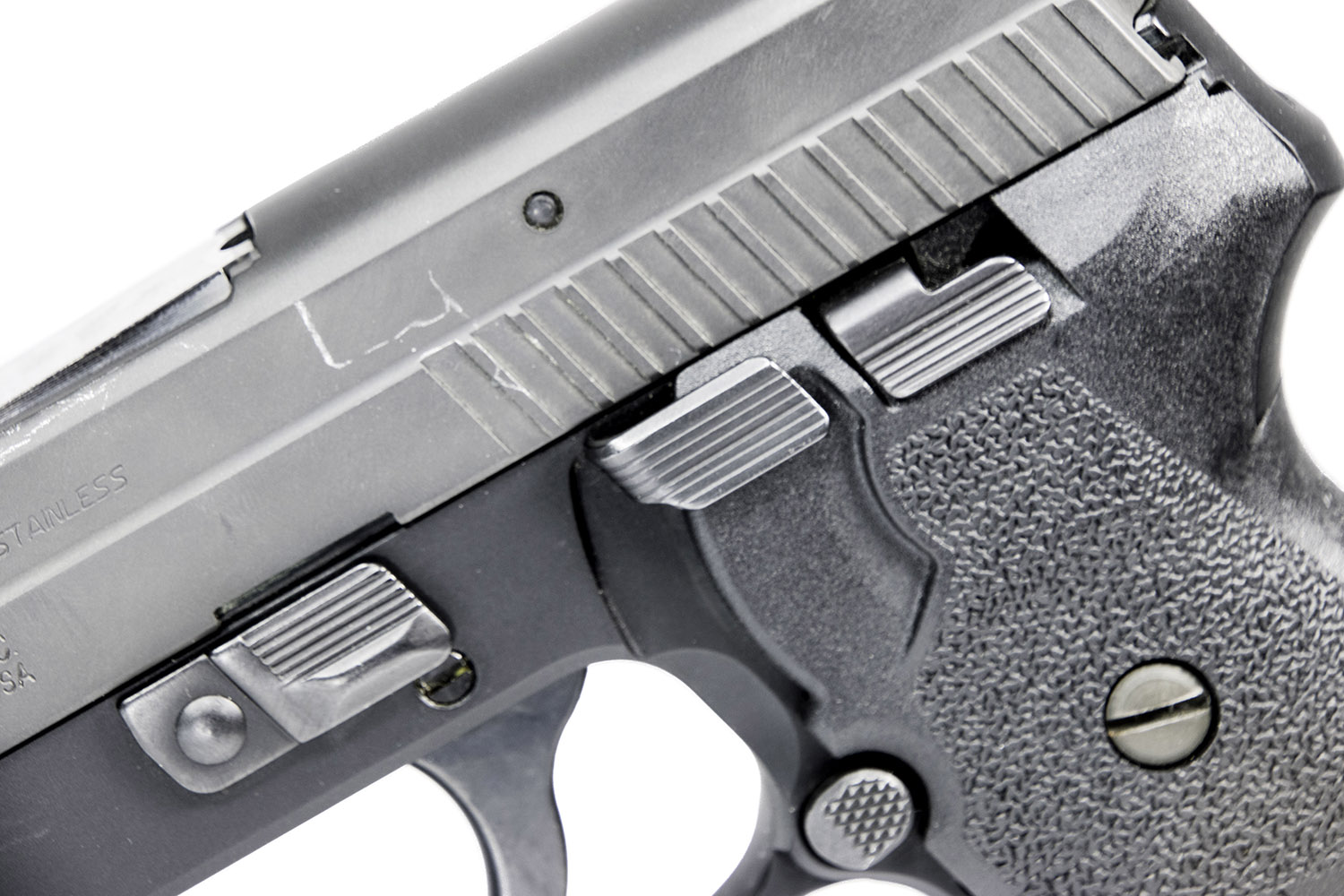 Slide stock, decocker and disassembly lever? Yep, must be a SIG.

This single-stack SIG features the same non-ambi controls as the rest of the SIG handgun line at the time. This means a slide-stop followed by an oversized decoking lever and finally a disassembly lever. 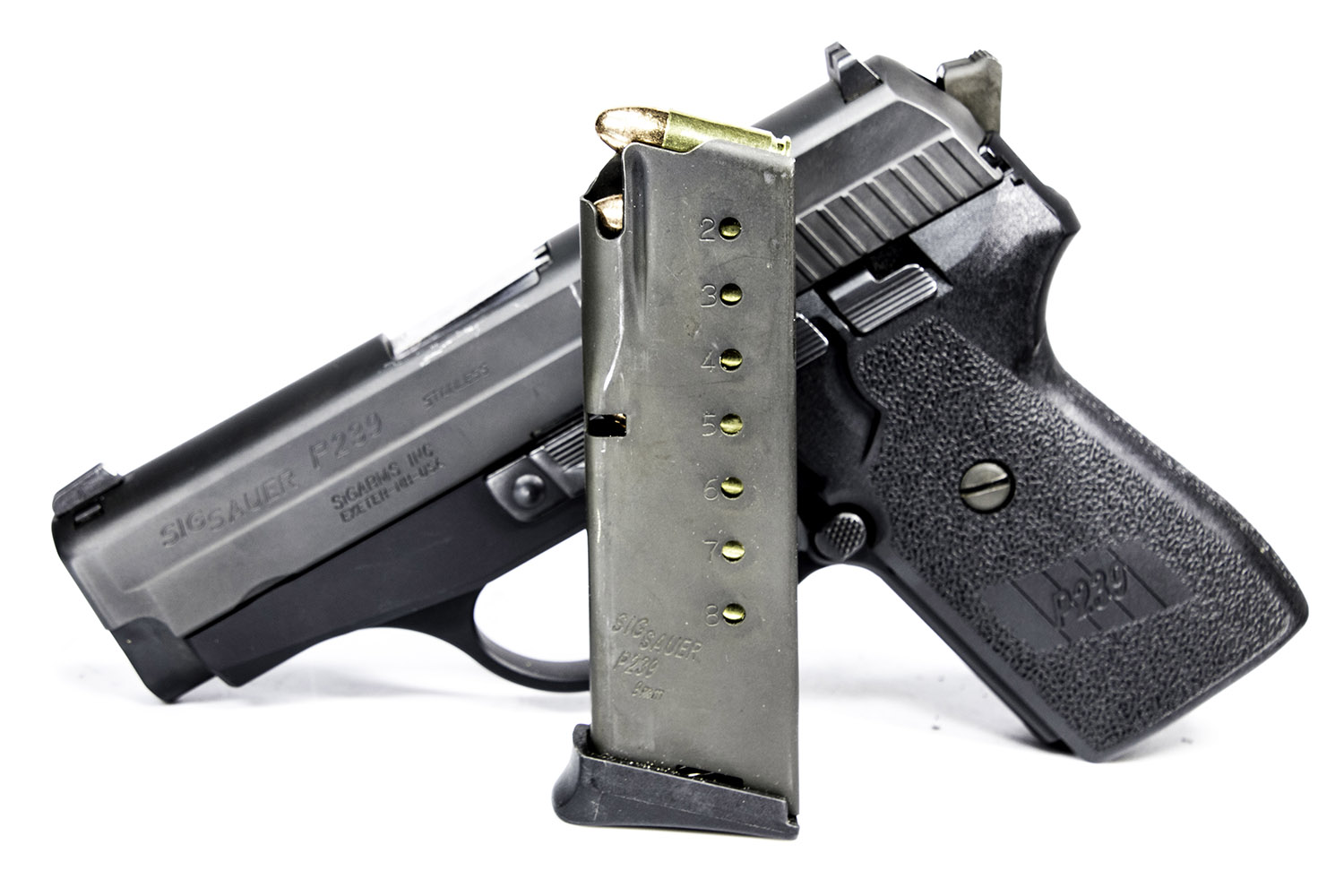 Also like other SIG handguns, it features the old-school, “dot the I” sight setup SIG was known for. The barrel too, is very SIG. It has the same John Mosses Browning linkless cuts as the HiPower introduced decades before.

As I mentioned previously, the P239 is a compact pistol in name only. Measuring six and a half inches long, 5.1 inches high and 1.2 inches thick, the gun is fairly chunky for a concealed carry piece. For reference, a Glock 19 is only a quarter inch longer, .06 inches shorter, and .06 inches thicker than the P239. 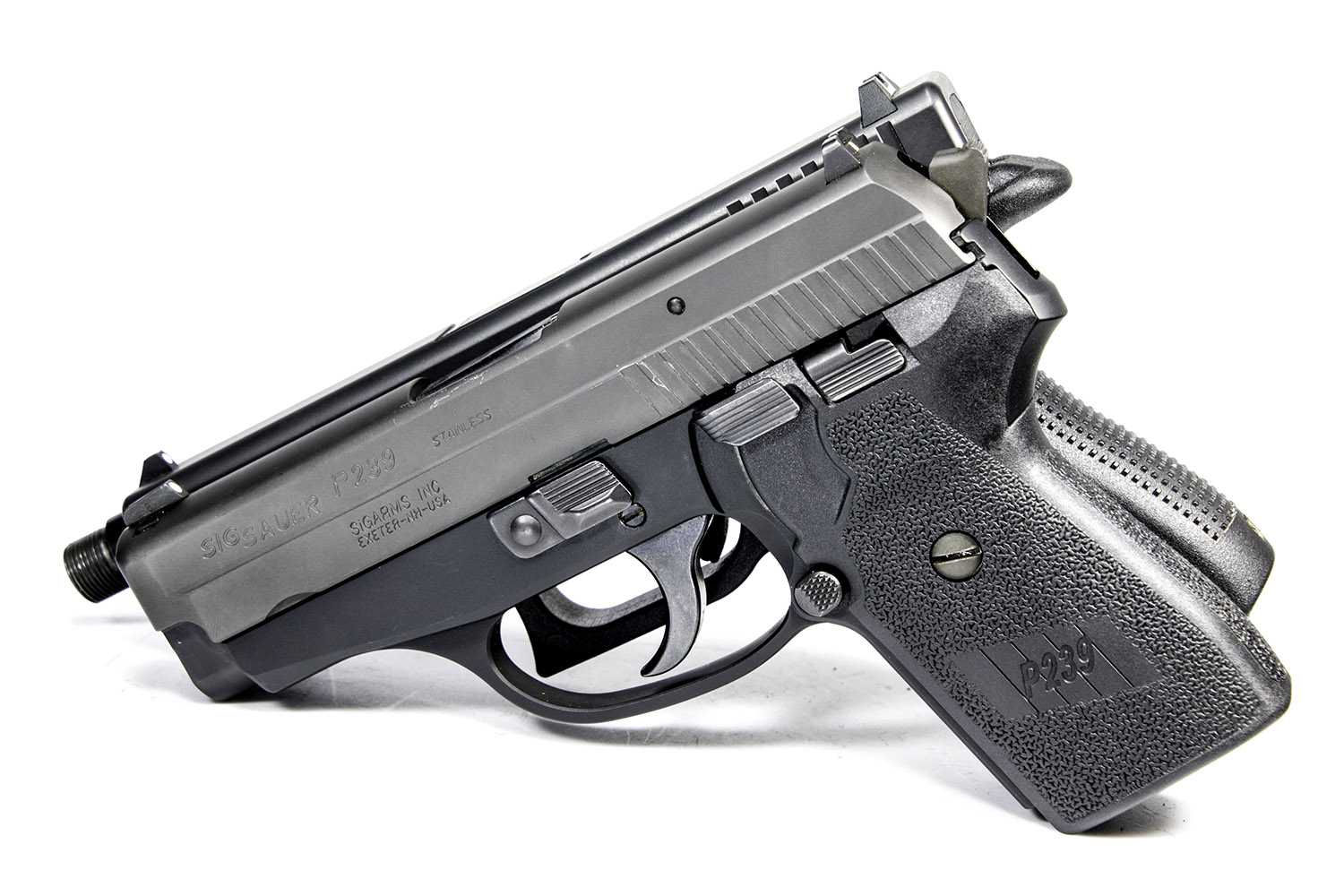 Making the P239 about as concealable, but with half the magazine capacity. Worse yet, the P239 weighs four ounces more than the Glock 19 unloaded. And on top of that, the Glock 19 features nearly half an inch more barrel, meaning better ballistic performance from its rounds.

Maybe the SIG P239 can’t hold its own today when compared to more modern firearms, but that surely can’t the case when it was introduced, can it? 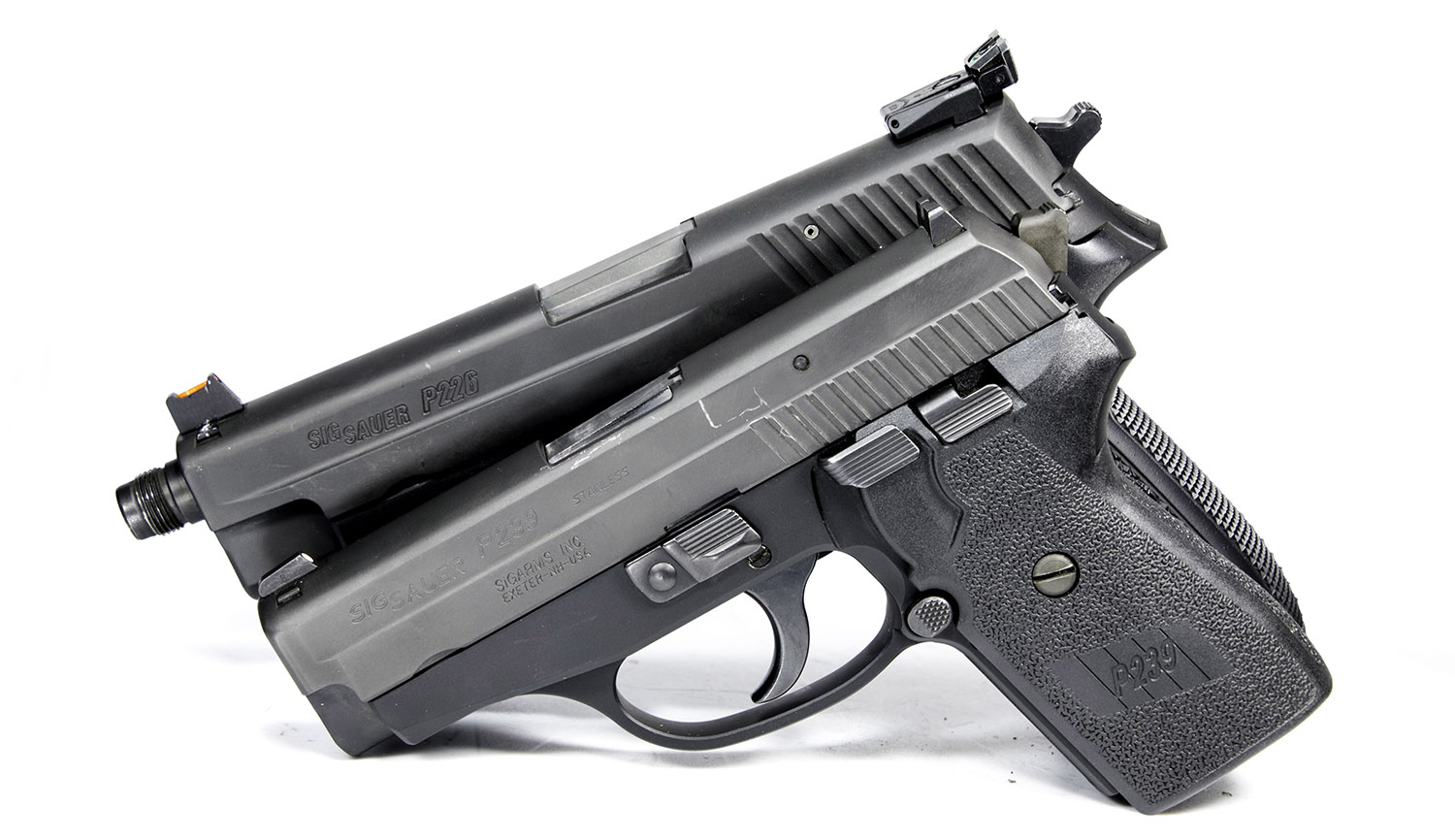 Sadly, when the P239 hit the American market in 1996, Glock’s model 19 compact had been available for eight full years. Which begs the question, “Why was the gun introduced in the first place?”

Honestly, it probably has to do with SIG-lovers wanting a more concealable option than the P229. The P239 is nearly half an inch shorter, five ounces lighter. So in that sense, the P239 is a success. Though, I would have personally loved it if SIG had found a way to slightly widen the frame to accept double stack magazines.

The model reviewed belongs to my wife, who purchased it in Massachusetts prior to the AW Ban’s expiration. At that time, single-stack pistols made more sense, as they were physically thinner, and the limited capacity wasn’t a hindrance due to restrictive laws in the state.

I had taken her to a half dozen different gun ranges, and had her try out various pistols to see which felt best in her hands. She liked the P229, but the only models available at stores were loaded with features, and thus prohibitively expensive. 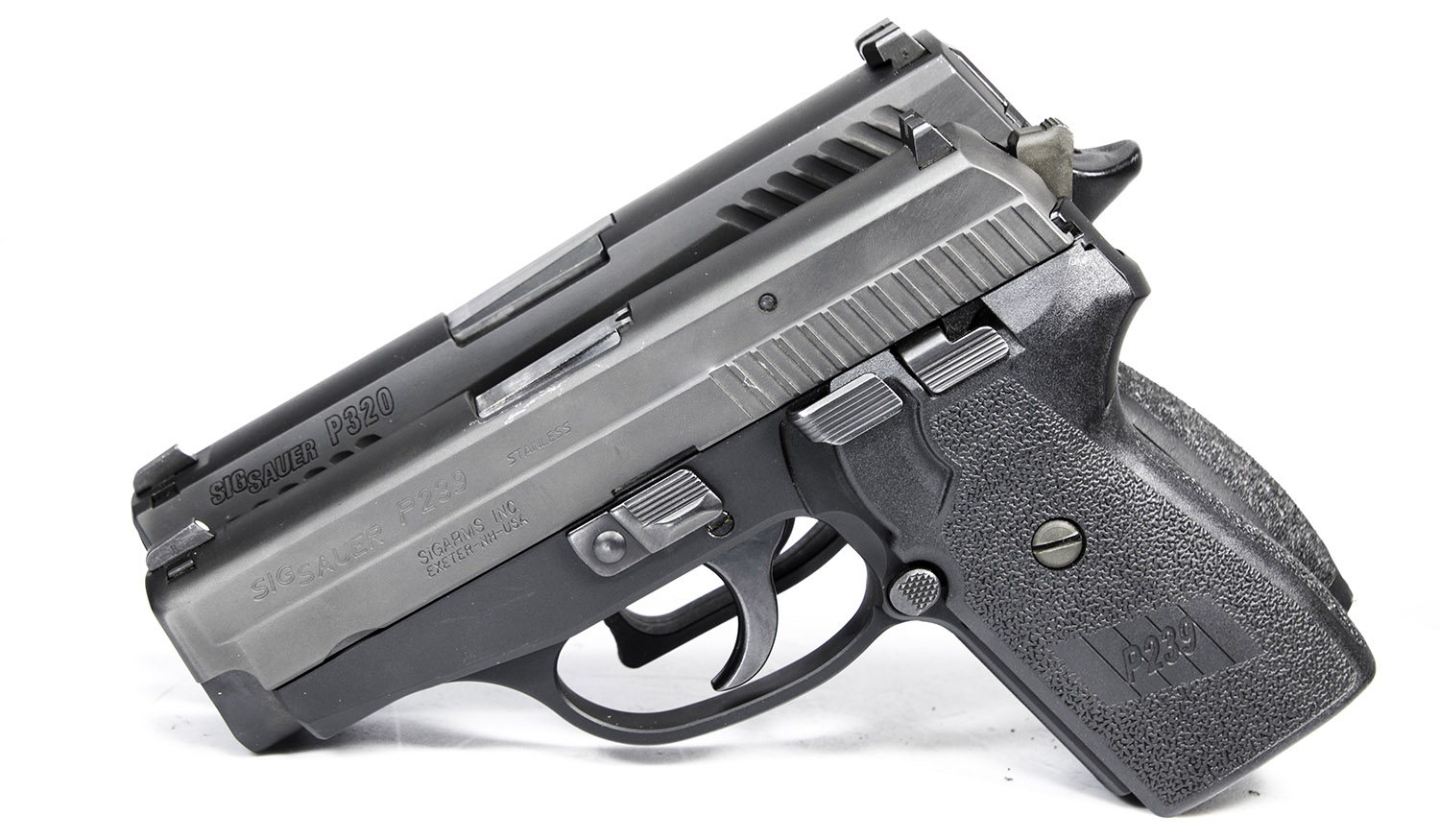 SIG’S 320 compact is the same size, lighter weight and holds more rounds than the 239

She also really liked the grip angle and feel of 1911s, but given her petite size, there was no way she’d be able to conceal one on her. She also tried a used Glock 26, but it was a little too snappy for her, and way to expensive.

In Massachusetts, Glocks are banned by the Attorney General, by name. Thus, only grandfathered pistols and a few exceptions were permitted. This lead to a similar situation to pre-86 machine guns, where the price of an otherwise affordable firearm is artificially inflated to stratospheric levels. 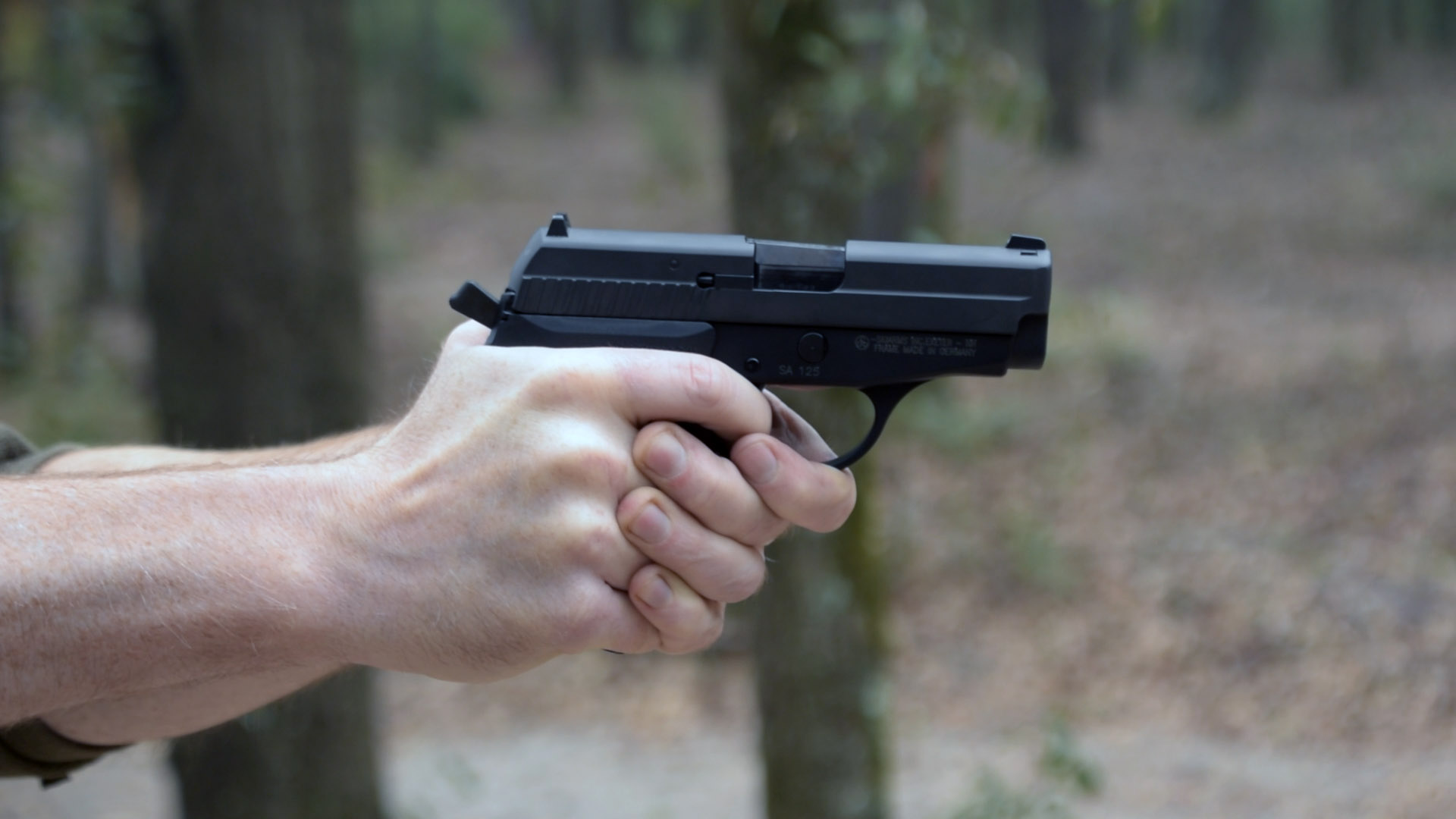 The 239 fits in the shooter’s hands well, but could have benefited from the removal of the over-sized trigger guard in favor of a railed dust cover

So much so, that when I left the state around 2010, I sold my used Gen 2 Glock 17 for $800 with three magazines. If that wasn’t bad enough, the frame featured a tear in the magazine well from a previous owner. (How exactly one manages to tear the polymer frame on a Glock, I will never know.)

Like most SIG handguns, the P239 is remarkably accurate – especially for it’s 3.6in barrel. In testing, the gun easily landed rounds on a human-sized silhouette target from ShootSteel.com at 120 yards. The same could be said of its ability to keep all rounds in the black on a standard NRA pistol target at both 25 and 50 yards. Of course, this is difficult given its short sight radius. But if the shooter does their part, the gun will shoot straight as an arrow. 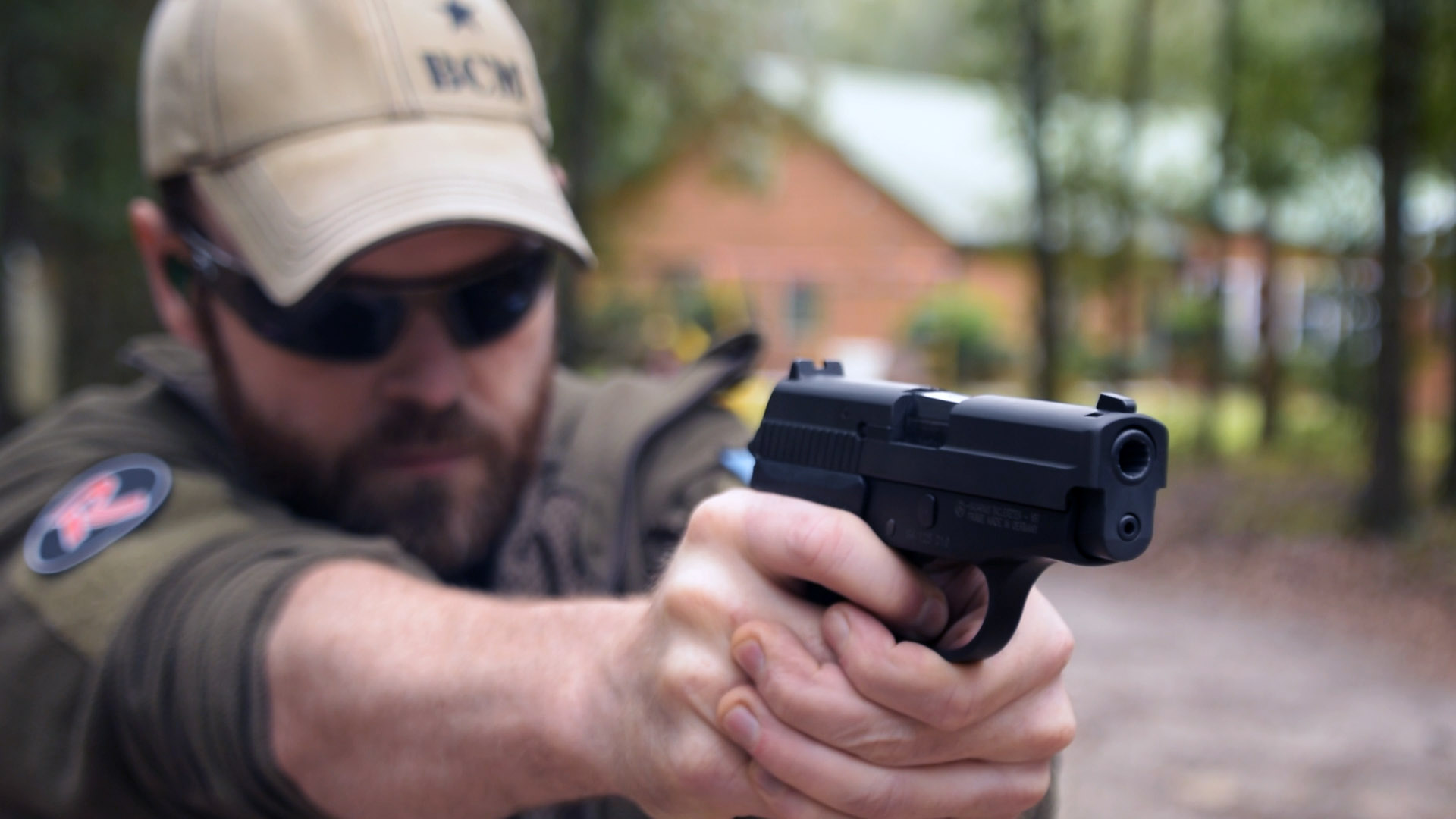 The author takes aim with the 239, taking up the slack on its double-action trigger

In terms of reliability, the P239 wasn’t quite as successful. It seemed to gleefully consume all manner of 9mm ammunition, provided that ammo was FMJ or ball ammo. Certain defensive rounds like from Winchester, tended to jam against the top of the chamber. These failure to chamber malfunctions were rare, but too common to trust for concealed carry.

That said, I was able to resolve the issue by applying some flitz polish to a soft dremel head and working the area over.

SIG’s P239 pistol isn’t a bad gun by any measure. It’s reliable, accurate and well-balanced. That said, it’s lacking in multiple areas such as capacity, trigger pull and price that make it a hard sell in a market saturated with less expensive, lighter weight, more capacious options.

If a shooter likes the feel and balance of the P239, it will serve them well – no doubt. But shooters considering the hefty compact pistol for concealed carry should give other pistols a more serious look first. But if you’ve got to have a SIG, and the P229 it just too bulky for you, the P239 will hit all the right notes.