Should You “Under Magnify” Your Rifle? (The Red Dot at Long Ranges) 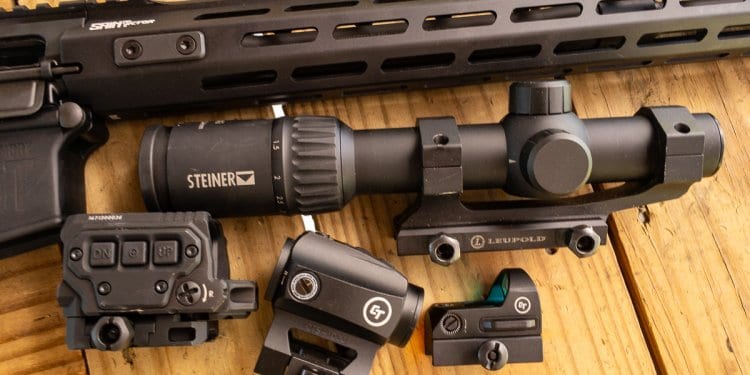 I’ve been testing the new Crimson Trace CTS-1000 red dot. When it arrived, my first decision was which rifle to use. Without too much thought, I opted to stick this on the new Springfield Armory SAINT Victor AR-10. Huh? The Victor is light at 7+ pounds (remember it’s an AR-10) so I figured I would experiment with a house rifle configuration, hence the no magnification experiment. 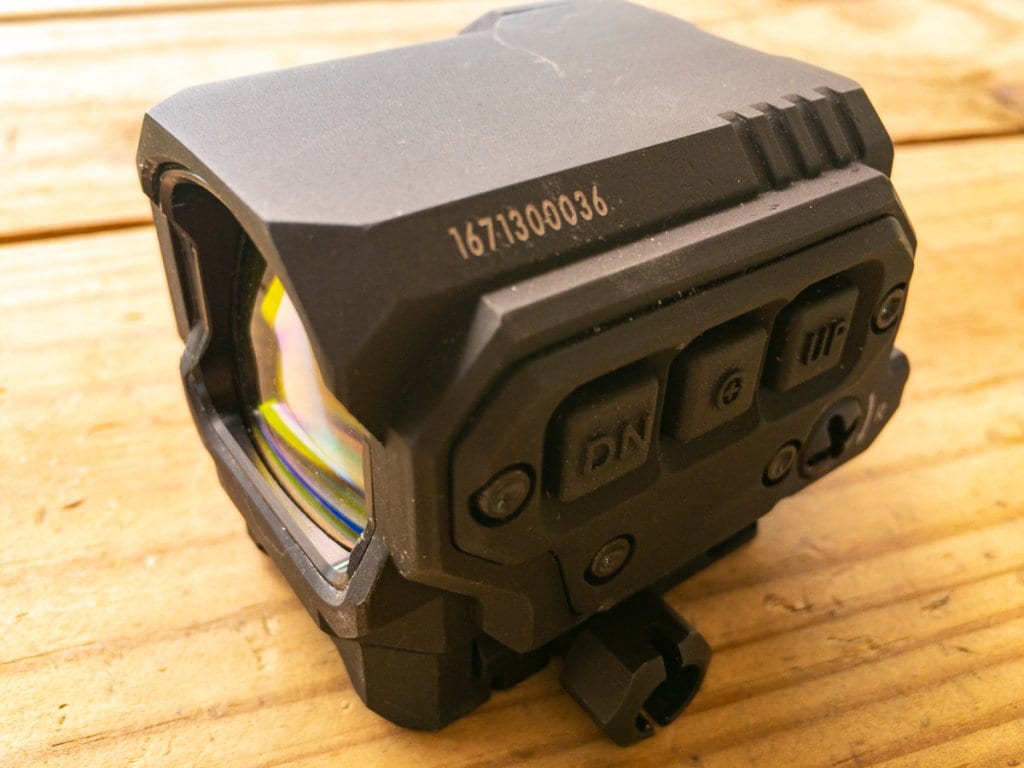 The Steiner Rx1 is built like a tank but I suppose that makes it durable.

The RX1 red dot is neat, because it features a four-dot mode that provides aiming points that address the “offset” issue at close distances. If you zero an AR rifle at 50 or 100 yards, and use it for very close-range shooting, you will have to remember to aim higher than your intended impact point. At, say five-yard ranges, the bullet will impact about 2 ½ inches below the dot. As you get closer to the zero range, the dot and point of impact move closer together.

Anyway, the RX1 offers a stadia dot mode with the primary 2 MOA dot sitting on top of three 4 MOA dots. The primary dot is your 50-yard zero. The lowest dot is the 5-yard point of aim and the two in between are for 7 and 10 yards. It’s a neat idea although you certainly need to train to use the “wrong” dots when shooting at close range. You can also set up the RX1 as a single dot solution if you like.

As you might guess from the 1-4x magnification, the Steiner P4Xi is a compact tactical scope.

The P4Xi is a more traditional short scope that offers a bit of magnification. Its power wheel is very generous at the lower power levels, so you have a lot of adjustment play in the one 1 – 3x magnification range. I like this because you can find a power level greater than one and use that all the time for up close shooting too. Fixed 2x and 3x scopes are onto something and there’s nothing preventing you from setting up this one the same way.

So, do any of these make sense on an AR-10 rifle that flings relatively big and heavy .308 Winchester projectiles? While the .308 isn’t ideal for long range shooting, it does just fine up to 1,000 yards, give or take.

Here’s the thing. Most people over-magnify their rifles. Sure, if the purpose of your range life is to print the smallest groups possible at a few hundred yards, magnification is a good thing as it removes the optical error associated with precise aiming. However, if your purpose is to get quick shots on target at rational ranges, then you may enjoy far less magnification. That optical precision that helps you shoot ½-inch groups comes at a price. Let’s look at a few pros and cons.

By definition, when you “zoom in” you’re also “zooming out” a whole bunch of other stuff. When the magnification goes up, the field of view, or area you can see down range shrinks. Let’s look at a couple of examples. 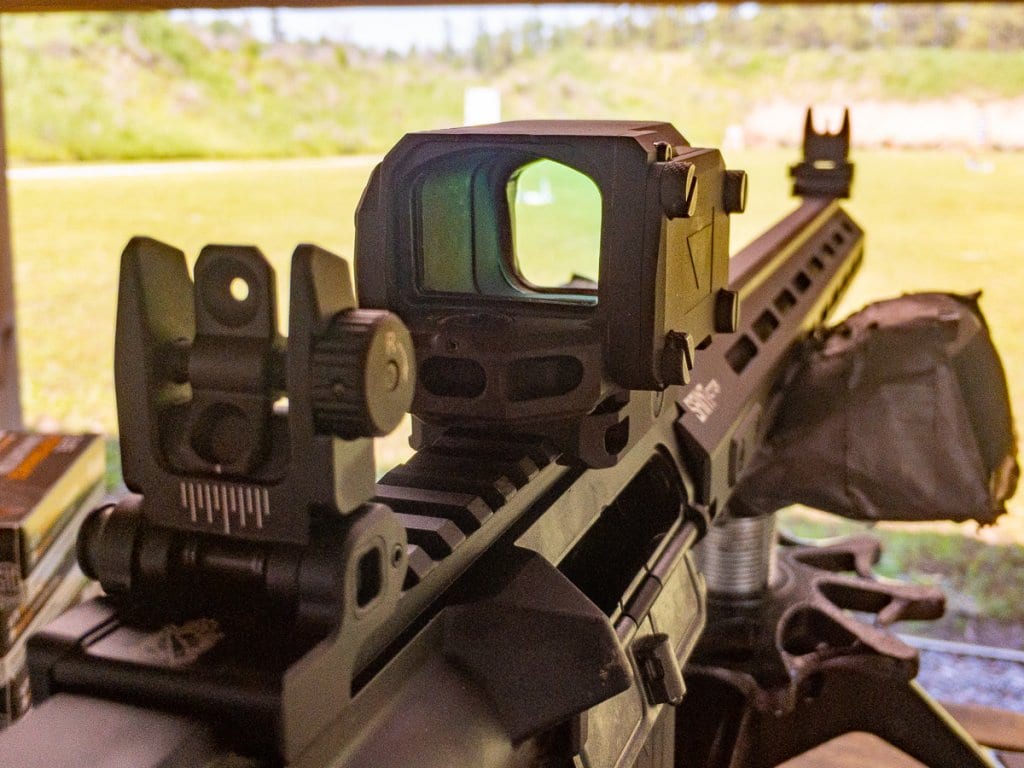 A zero magnification red dot like the Steiner RX1 gives you a virtually unlimited field of view if you keep both eyes open.

If you’re looking for your target down range, low magnification is your friend because you can see a lot more. Each movement of the scope opens up a whole new enlarged view

The higher the magnification level, the more finicky your sight picture. A bit of eye placement imperfection will give you the ring shadow of doom in your view rather than a nice crisp view of your target. When you combine the narrow field of view with finicky eye relief, the overall system is relatively unforgiving. At low magnification levels, you’ll see a lot less of that shadow ring of doom.

Scopes are all about light transmission to your eyeball. The average eyeball can process a beam of light about 4mm in diameter give or take. When you increase magnification, you narrow the diameter of the beam coming out of the eyepiece of the scope. The size of the beam of light coming to your eye is called exit pupil and calculating it is relatively easy. Just divide the objective (front) lens diameter by the magnification.

The next time you’re in a gun store, try some different quality scopes and note the value of clarity compared to magnification. I’ll take a lower-powered, but more clear, scope any day.

Big magnification also shows you more of what you don’t want in your sight picture – wobble and heat mirage.

You Might Surprise Yourself with Your Long-Range Red Dot Ability

Back in the day, when Springfields and M1 Garands roamed the earth, magnified optics were few and far between. But guess what? A good infantryman was expected to hit a man-sized target out to 500 yards using nothing but the iron sights. Yes, with a little practice, you can do it too, even with a 70 or 80-year-old battle rifle. 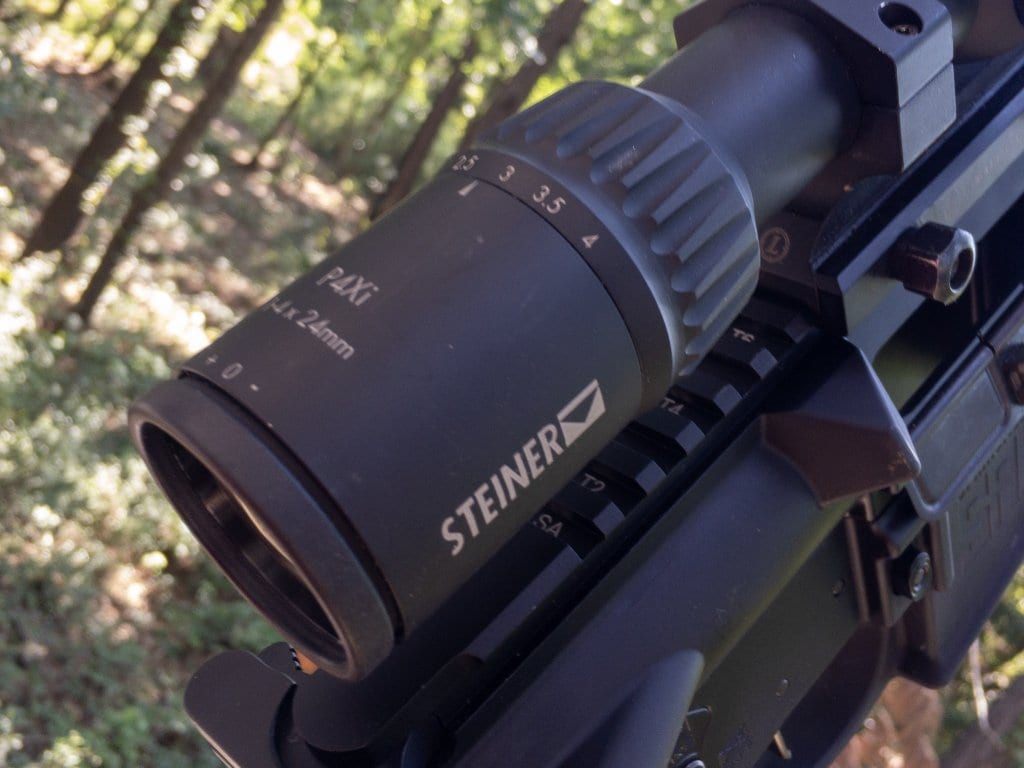 Most of the red dot options suitable for rifle use have 2 MOA red dots. At 100 yards, that covers a two-inch circle on your target. At 500 yards, it still only covers a 10-inch circle on your target. If you can see it, know your bullet drops, and exercise good technique and trigger control, you can hit it. Are you going to be able to print five-inch groups? No. Are you going to be able to ring a steel plate at will? Yes.

Now add a few degrees of magnification, even just the 4x level of the scope mentioned previously. That makes a world of difference. You won’t be viewing your bullet holes on paper from 500 yards away, but you will be hitting your target with ease.

You’ll be surprised at what you can do with a lower-power scope. Give it a try!