Walk into a gun shop, talk to some LEOs, or just speak with some Subject Matter Enthusiast who carries, and talk about sight selection. There’s a pretty good chance they’ll tell you must get night sights. Others will vehemently deny they’re necessary at all.

So do you need ’em? Maybe. Maybe not. That assessment differs depending upon which SME (Enthusiast or Expert) you talk to. Before you spend the money on adding night sights to your weapon (assuming it didn’t already have them installed), work through some considerations first.

You will note if you work your way through all the information below that opinions vary. That’s a Good Thing. If we’re all thinking alike, nobody’s really thinking. Different perspectives are important if you want to make an informed choice.

But before we get started, if you’re new at this, let’s address the first question.

What are night sights?

What are night sights made of?

Put simply, night sights glow in the dark. Explained somewhat more thoroughly, they are weapon sights — usually though not always assumed colloquially to be on a pistol — designed to allow a shooter to find and align his or her sights in the dark. They are often referred to as self-illuminated, though anymore this is a fairly redundant term. Most (though again, not all) night sights are mad with Tritium, which is a radioactive isotope of hydrogen. Sights made with Tritium are treated with a phosphor material that reacts with the Tritim’s radioactive elements to become…wait for it…phosphorescent.

By definition, night sights do not require the use of an artificial light source (e.g. a flashlight) to “pick them up”. This is true only when it comes to acquiring the sights with the naked eye. Positively identifying what’s on the other end of your muzzle is another matter entirely.

Tritium sights are distinct from fiber optic sights in that the latter, which often function very well under low- or no-light conditions, “gather” ambient light vs. producing their own. They are less expensive than tritium sights but are also substantially more fragile. Tritium sights produce light via “tritium luminescence”, which is a fancy way of saying they glow. They don’t require electrical or solar energization to be luminescent (until they wear out at least).

The science of tritium sights is little different than that of illuminated watch hands and some of the “permanently” illuminated signs you see on the walls of public buildings.

Night sights do not eliminate the need for one or more artificial light sources. In the ideal setup, a handgun will have a WML (weapon-mounted light) on it and the person using that pistol will also have a handheld flashlight. 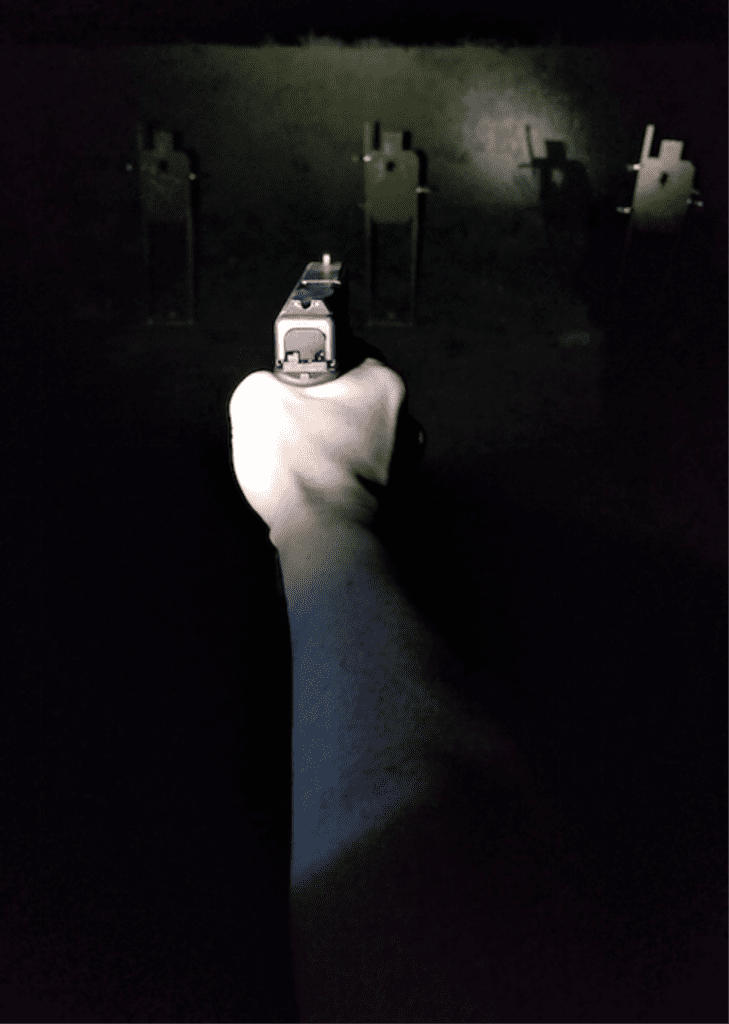 Pros and Cons of Night Sights

See what we did there?

This is a work in progress. It will be updated periodically with more commentary and information.

Edit 4/9/21: a video explaining tritium has been added below; the author’s personal sight selection to be added shortly.

I’m going to start with Mike Pannone of CTT Solutions. This video changed up how I personally view night sights (pun intended) and though it’s a few years old now, the info and perspective is (imho) excellent.

Why no Tritium night sights on Pannone’s gun?

“The rationale behind that is two-fold. One is that I always bring a light with me. Wherever I travel, I have a handheld flashlight. And two is that if I can’t identify a target then I can’t engage it…there’s a point in the day where Tritium sights are useful, and it’s relatively limited. it’s the point where you can actually identify if someone is a threat or not without handheld light or artificial light of your own, but it’s low enough light that you can’t see normal traditional sights — black sights or even fiber-optic sights. That sliver of the day is benefited by Tritium sights, but that’s really the only point.

When you’re past dusk and you’re into the evening portion, you still need artificial light, and once you have an artificial light it doesn’t matter what type of sights you have because it’ll illuminate those sights.

In defensive use of a firearm, if I need to positively identify a threat, I have to have artificial light.

On all the guns that I have, I try to keep a consistent format, and so I use a fiber-optic front and a black rear on my sport guns and on my defensive guns. So when I press the gun out and I identify that front sight, it looks the same no matter where I am or what I am doing.”

Now we’ll go on and visit some other folks and see what they have to say.

We’ll start with Paul Harrell. We’re starting with him because I really enjoy his delivery. He’s neither much-tactical-so-operator in demeanor or delivery, and he speaks in an effective combination of eloquent and everyman I think most anyone can appreciate.

Though some of the gear snobs and cognoscenti might disdain him.

Fast forward to 5:05 to start the bit about night sights or just watch the whole thing and learn something.

Nights sight discussion in this video starts at 02:20.

“..you have to have sufficient light to see what you’re shooting at. You don’t just…shoot at shapes and shadows. You need adequate illumination to acquire, identify, and engage your target. And if you have enough illumination to see your target, you can virtually always see the outline of your sights. Meaning, you’re [almost] never actually needing your Tritium dots.

Usually, if you’re using your Tritium dots, it’s in dark shadow and you can’t even identify the target — which means you gotta…illuminate. And then, if you illuminate…then there is sufficient illumination for you to see the angle of your sights again.”

These aren’t specifically about Tritium or Phos sights, but they do bring up a couple of things worth putting into your due diligence efforts.

By the way, Paul Gomez was something of a savant — and one that too few gun-owners (and those who practice the noble profession of arms) know of. I’d suggest working your way through all of his videos.

This is an excellent overview of different types of pistol sights. The topic of night sights begins in this video at approximately 07:51.

John briefly hits the topic of night sights at 8:19 in the following video. The rest of the video addresses some basic issues (and his preferences) of sight selection.

Bonus science lesson. Tritium sights all have one thing in common. Tritium. This video is about Tritium in the context of watches, but maybe you’ll get something out of it.