Toss the term cheap magazine around and watch people recoil. Cheap magazines (like KCI magazines) are often referred to as the bane of gun owners. The term causes immediate backlash. These magazines cause failures, frustration, and physical pain even! Cheap magazines are why my parents got divorced! Cheap magazines made Kanye and Kim break up!

That being said, sometimes it’s best to be more specific.

When I say KCI Magazines, I’m saying “cheap magazines”, but I’m not saying it in a way to provoke disdain.

KCI Magazines are one of the rare magazine options out there that are both cheap and not hated, nearly universally. If that makes sense.

They have a place, and their low price point combined with decent performance makes them an affordable option for many. If you’ve never used any KCI products, I heartily recommend you give them a second look, and here are three reasons why you should give them a chance.

Affordability is the name of the game when it comes to KCI magazines. Without a doubt, it’s the thing that catches your eye first when you browse through them. They are priced to move, and our South Korean friends seem excited to provide American shooters with cheap magazines.

Let’s be honest. In the gun world, you get what you pay for, but there is some wiggle room in that rule. KCI Magazines are an example of that wiggle room. These magazines are not made for duty or serious professional or self-defense use. Plenty of guns aren’t for serious or professional use.

Historical range guns, just-for-fun guns, or that 8th Glock in your collection likely won’t be the gun you rely on for self-defense. Have a few good magazines for every gun, but also have some affordable mags for range use.

Some OEM magazines are just plain expensive. P90, MP5s, and even M1A magazines are expensive. Having some cheap mags to avoid wasting range time reloading is a must-have when poking holes in paper.

Once exposed to harsh conditions, you may run into issues, and admittedly they won’t take the same beating an OEM mag can take and keep on keeping on. KCI Magazines cost a third of most OEM magazines but they give more than that third in performance.

We’ve established that OEM magazines can be expensive. Glock is well known for making cheap OEM magazines, but KCI Glock magazines are still half the cost of OEM models. KCI Magazines present a nice cheap option for training.

Training can be rough and should be rough. Why potentially break, bend, or deform good OEM magazines while training when KCI Magazines exist? If you are running reloads and dropping magazines on hard ground, in the dirt, or in the sand, then why not use a cheap magazine you will never rely on? 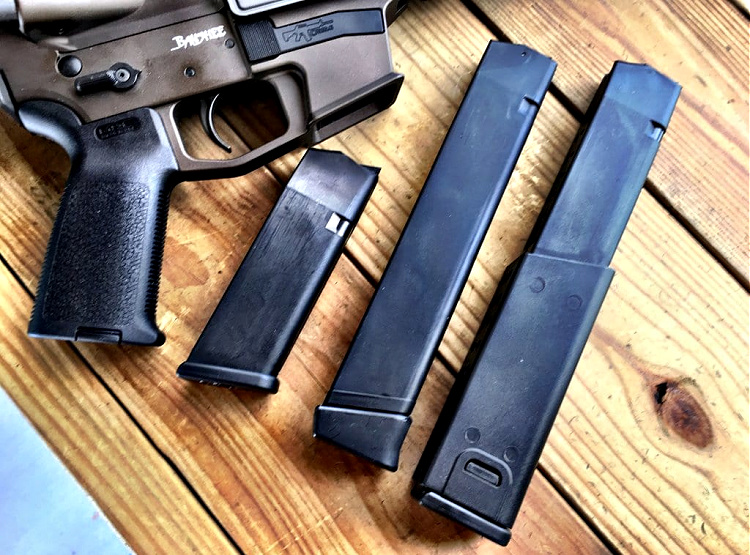 If you break KCI Magazines, who cares? Toss it and move on. You’ll be out very little money, and you’ll have prevented your reliable OEM magazines from getting their butt kicked, especially when it comes to those expensive magazines we mentioned above.

I’ve also modified KCI Magazines to serve as ‘dry fire’ magazines. The portion of the follower that engages the slide catch is filed down. I’ve cut the spring and glued in 5 ounces of lead weights to mimic 17 rounds of 9mm. The end result is a cheap magazine that mimics the weight of a loaded magazine for dry reload purposes.

3. Plinking and Beyond With KCI Magazines

I don’t think it’s controversial to say that most civilian shooting in the United States is done for recreational purposes. Plinking is the act of shooting without any distinct purpose. It’s the best way to turn money into noise while having a good time.

Drums and extendos make up near half of the KCI Magazines out there. Guess what? They don’t suck either. At least not the few I’m taken to the range. This includes the 50 round AR 15 magazine, the 75 round AK magazine, and the Glock 17 50 round drum.

Looking at the current ammo situation, I’m almost regretful that I blew through so much ammo with nary a thought to not getting more ammunition. I’ve blasted through a good bit of 9mm, 5.56, and 7.62 through these drums, and they’ve always been quite reliable.

KCI Magazines produce drums for lots of guns, and this includes the aforementioned AR, AK 47, and Glock. You also get AK 74 drums, Mini 14 drums, a Glock 40 S&W drum, and even an SKS drum. They got more drums than that Slipknot.

Drums are silly but a ton of fun. The same goes for extended magazines, and KCI makes them for Glocks, 1911s, Beretta’s, and beyond. If you’re having fun, reloading is lame, and the ergonomic difference a drum or extended magazine makes doesn’t really matter.

KCI Magazines have a place in the industry. They wouldn’t be the magazines I’d trust for duty or self-defense, but for training and plinking, they get a Stone Cold Steve Austin sized “Hell Yeah.” In my experience with Glock, AR, and AK KCI Magazines, I’ve had surprising success.

They might break and fail when exposed to harsh conditions, but they are quick to fix and cheap to throw away if need be. The magazines work well for the square range and provide affordable options in the face of expensive factory magazines. As long as you keep your expectations realistic, then you’ll be surprised by the quality of KCI Magazines.

KCI Magazines are most assuredly a bargain.