I’ve been testing a few different revolvers outfitted for moon clip use over the past several months. The idea is nifty, as moon clips help to mitigate one of the big disadvantages of using revolvers for defensive use. That would be fast and efficient reloading.

With a pistol, resupply is easy. Just hit a button to drop the empty magazine and stuff in a new one that’s already reloaded with a bunch of fresh cartridges. The whole operation takes just a second. With a traditional revolver, you can usually dump all the empty cartridge casings in one fell swoop with the aid of the ejector rod and a little help from gravity. It’s putting the new ones in that can take a little doing. Normally, you would insert new cartridges one at a time, so that’s 5, 6, or more distinct motions to fully reload depending on which revolver you’re using.

The invention of moon clips made the extraction and reloading process much easier. These flat springy pieces of metal have cutouts that allow you to push cartridges into the clip just forward of the case rim. When loaded the moon clip gives you a complete cylinder full of cartridges stuck together as one unit so you can load all cartridges at once.

Other styles of moon clips are available. You can get half-moon clips and even two-cartridge clips. For example, half-moon clips for a 6-shot revolver would each hold three. To fully reload, you drop two assembled components into place. The benefit of smaller capacity clips is easier stowage of spare ammunition and the ability to (theoretically) top off a partially used cylinder. 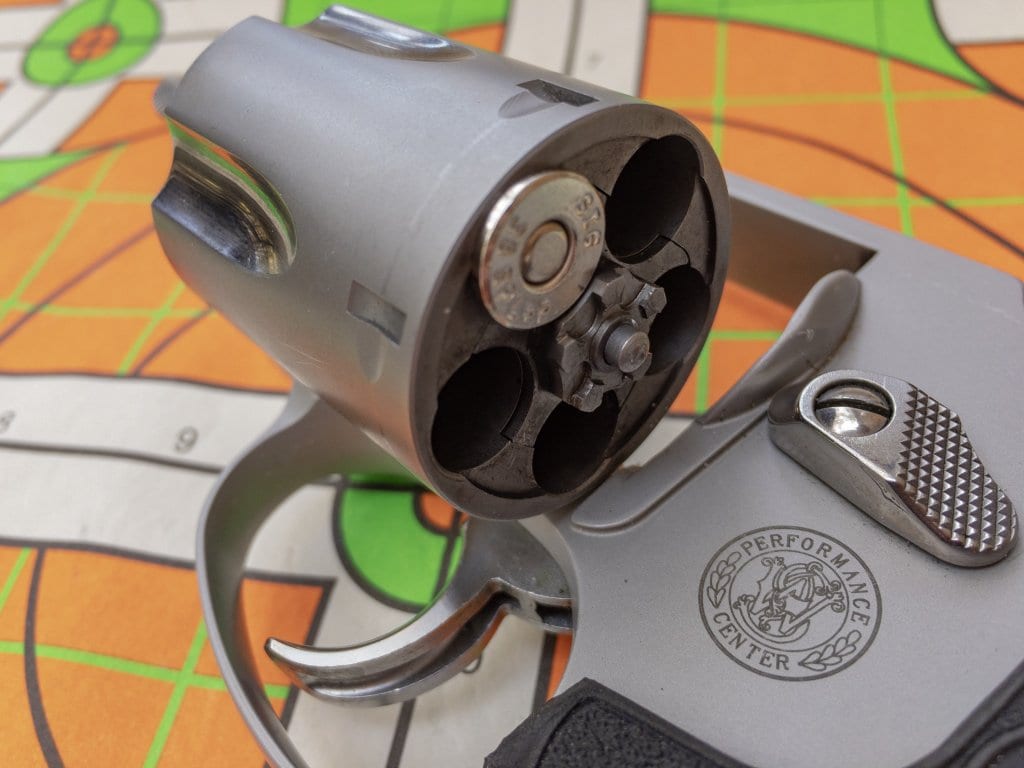 There’s another reason for moon clip use. With those, you can use traditional semi-auto cartridges like 9mm, 380 ACP, or 10mm in a revolver. The moon clips allow the revolver extractor to push out the rimless cartridges as a group while also offering support against the back face of the cylinder.

When shooting a few different revolver models where the cylinders were cut for moon clip use, I noticed some performance differences. As I was shooting a Smith & Wesson 586 L-Comp revolver for accuracy and not speed, I started to shoot groups without using the moon clips. My group performance was abysmal with 25-yard five-shot groups averaging five to six inches. Considering I was using premium defensive ammo like Sig Sauer V-Crown, Federal Premium HST, and Barnes TAC-XPD, I was stumped – for a minute. Then I set aside the “oh duh” and figured out that I hadn’t been using the moon clips.

For a revolver like this, the cylinder face is recessed, so when shooting without the clip in place, cartridges still work, but aren’t fully supported all the way around the rim. Ipso facto e. pluribus unum, accuracy was a bit on the wild side to say the least. I started to use the clips and accuracy immediately moved into the 1.5 to 2.5-inch range for five-shot groups at 25 yards.

While the accuracy difference may not matter in an up close and personal self-defense encounter, it’s good to know what they trade-off is. Moon clip revolvers are almost always designed to operate safely and reliably with or without the clips, so there’s no downside other than accuracy. Just something to know.