G43X/48: Glock Slimline Mags and Accessories for Work and Pleasure

Accessories
By The Mag Life
86926
5
5 Join the Discussion 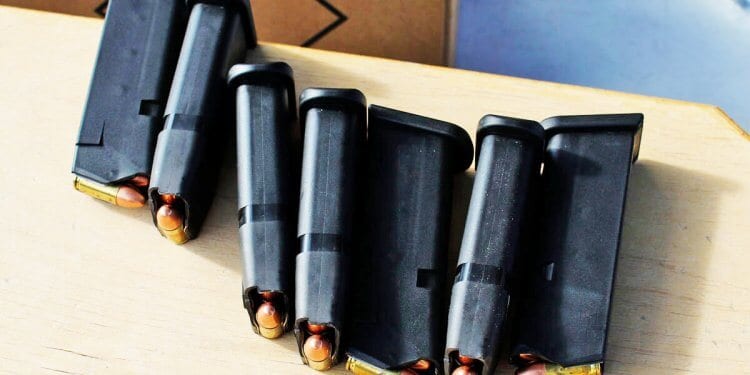 What are the best Glock 43X upgrade options available? What Glock 48 accessories should you consider? Are there any non-OEM, i.e. factory, Glock 43 magazine, or Glock 48 magazine alternatives worth looking at? Let’s do the run-down on up-gunning your Glock Slimline pistol.

Glock shook things up in the handgun/concealed-carry world when they debuted the Glock Slimline models at SHOT Show 2019. News of the Glock 43X and Glock 48 quickly had everyone talking as much about the company’s corporate strategy as the pistol models themselves.

Like the G19X before them, the G43X and G48 filled gaps in the Glock lineup. Basically, the G43X is a G43 with a longer grip and the G48 has a bit more barrel. And despite many early detractors, both weapons became, and remained, very popular. That popularity is why we’ll be discussing necessities, accessories, and upgrades in this article.

Why accessories and upgrades? Because almost anything can be improved. 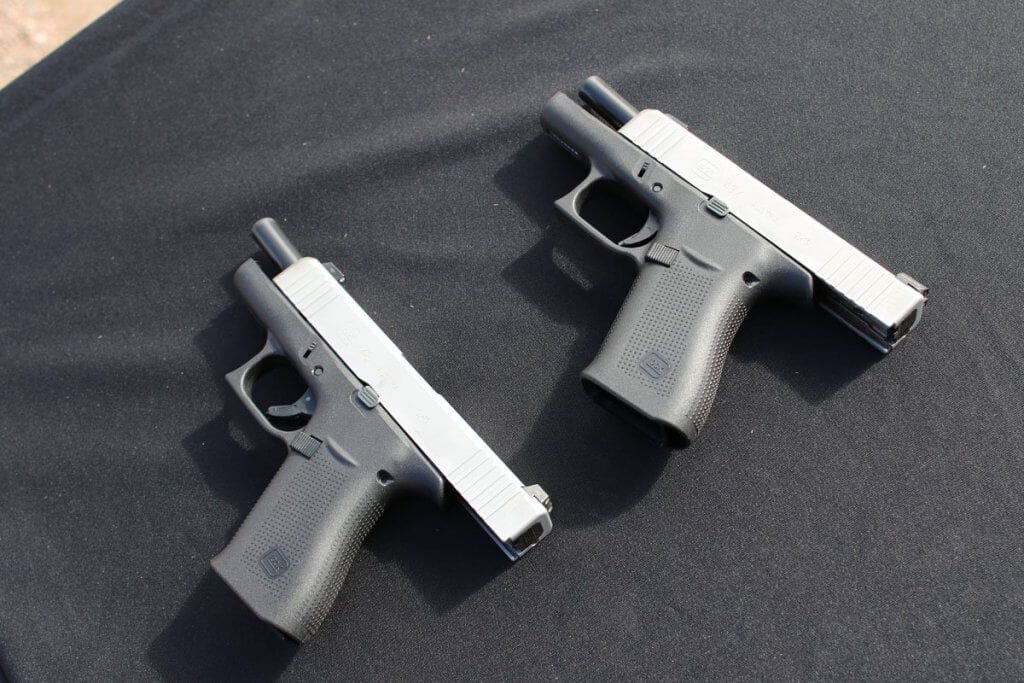 Contrasting the G43X and G48. This picture was taken by David Higginbotham at GLOCK’s booth during Industry Day on the Range, SHOT Show 2019. The consistent demand for both models has led to what might have been the inevitable development of Glock 43X upgrades and Glock 48 accessories.

This Mag Life collaboration was begun by David Higginbotham. Editor and contributor: David Reeder, Other contributors: Stephanie Kimmell. If you would like to suggest something that should be added to this lineup, please sound off in the comments below or email us: social(at)gunmagwarehouse.com.

The G43X is basically a G43 with a longer grip (although there are other differences, q.v.). The initial OEM G48 / Glock 43X magazine offerings increased capacity to 10 rounds but still kept with the original G43’s single-stack design. However, those who were (or are) hoping for compatibility between the G43 and G43X a la G17 and G19 will be disappointed. A Glock 43X magazine will not fit a 43’s magazine well.

For those who want a bit more barrel but the same thin profile, there’s the 48. The overall length of the weapon is increased to just over 7 inches, but it remains just 1.1 in. wide. 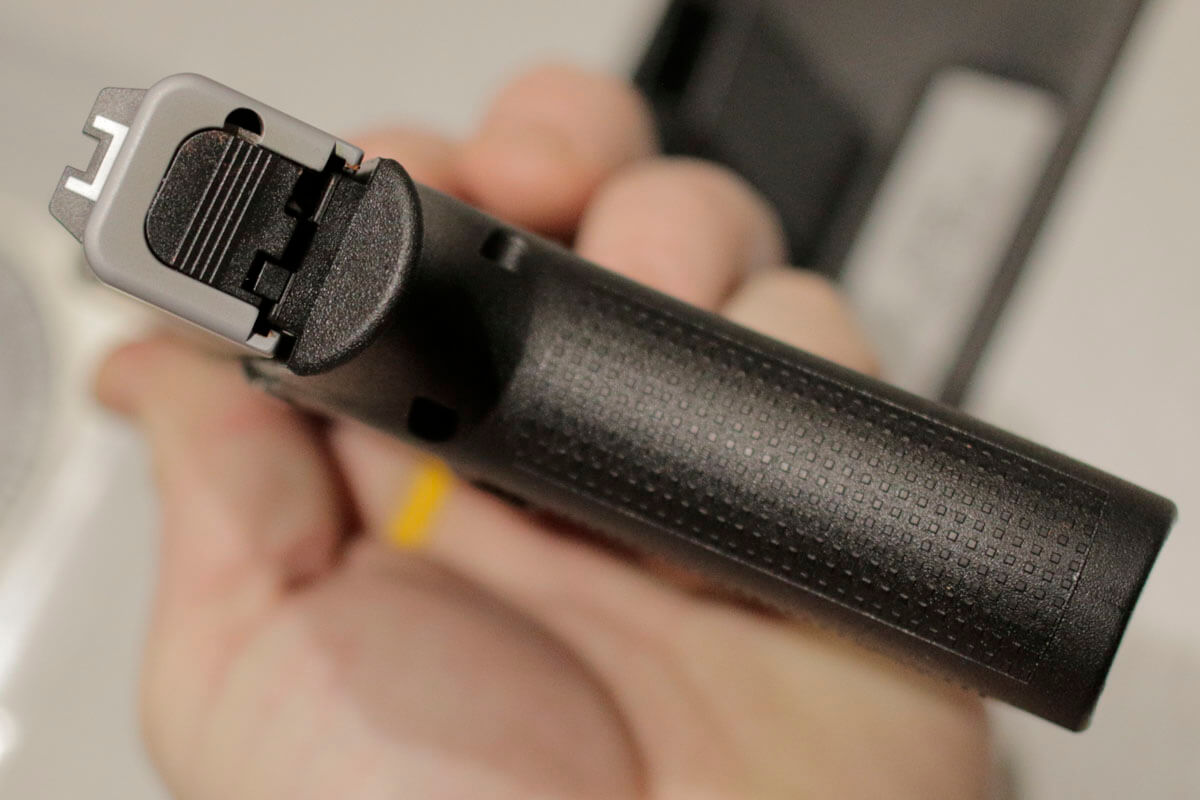 The slim profile of the 43X single-stack grip. It is for good reason they refer to these guns as the “Glock Slimline” series.

It will perhaps be a consolation to those who remain forlorn about the 43X vs. 43 disparity that the G48 does use the same 10 round magazines that the 43X does. Those who are looking for aftermarket options may be interested in the 19-round ETS magazine or the ProMag 50-round drum. 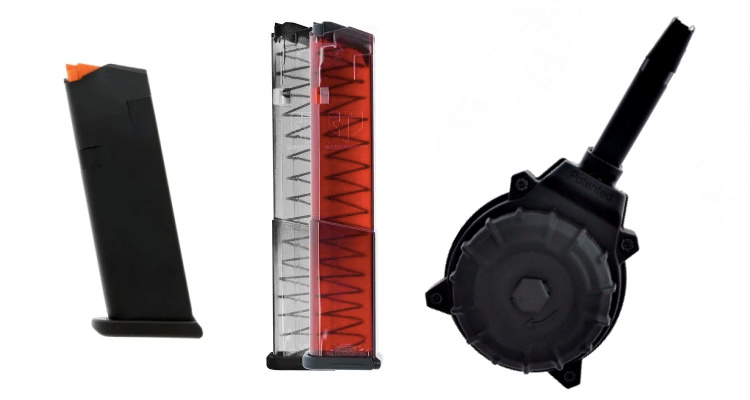 Three Glock 48 and Glock 43X magazine options, left to right: factory Glock 10-round, ETS 19-round, and the ProMag 50-round drum. (Images not to scale.)

“I shot both [the Glock 43X and Glock48] at SHOT Show. I carried a Glock 42 for a couple of years and loved the recoil response of the bigger .380, but switched to a 43 for the additional firepower. However…the G43’s grip always felt small in my hand.

The Glock 43X fixes that for me. I can get an extra finger on the grip and the gun feels much more substantial in my hand. The Glock 48 is even better. It fits the hand and provides just a bit more length. For those of us on the larger side of the height spectrum, that extra length is no challenge to conceal.” 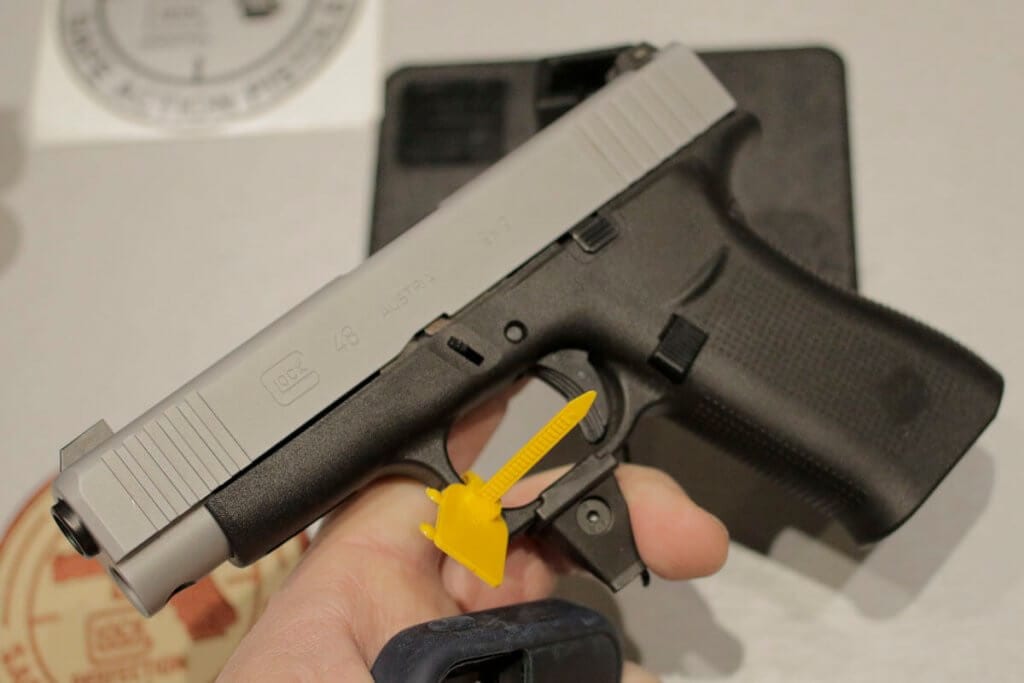 The 48 has a bit more slide than the 43X, but the same grip. Read additional analysis of the Glock 43X and Glock 48.

Did the 43X create as much controversy as the 19X did? Maybe not as much, but it was close. There were many folks who just couldn’t understand why Glock chose to marry the G17’s grip length with the G19’s shorter frame, but that gun has continued to sell well. 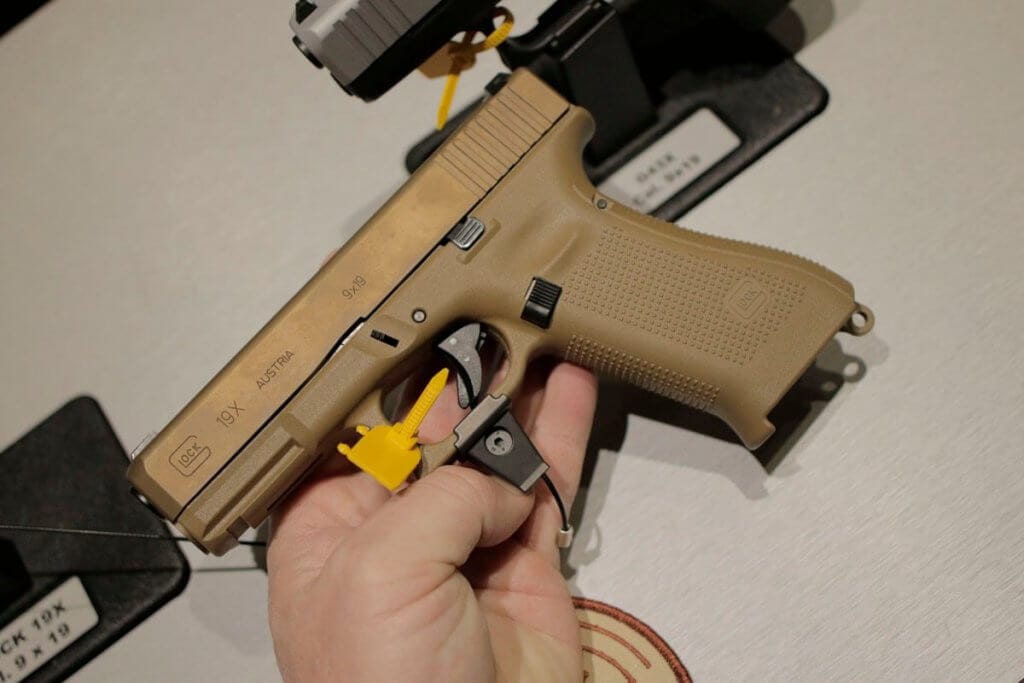 The 43X kicked off a similar debate, though there was never as much angst about the 48. One of the big questions was why Glock added capacity with length instead of moving toward a slime-line double-stack like some of the competition. Glock doesn’t have to answer for its actions, however. They’re Glock. They continue to provide the gold-standard for 9mm polymer pistols, and everyone else plays catch-up…though they increasingly have competition, particularly in the micro-compact arena.

Accessories vs. Upgrades: a note from the editor.

For this article, we will be making a distinction between accessories and upgrades. The purpose here is not to argue semantics, but to provide clarity. For the purposes of the items enumerated below, we’ll use these definitions.

Accessory: something you should have on your gun if at all possible. Finances, availability, holster availability, etc. may affect this.

Upgrade: something that does or arguably does improve the function, performance, handling, or aesthetics of your weapon. An extended slide release may be helpful because of your grip, a comp may help you shoot faster and/or flatter, but neither should come before a weapon light — at least not on a gun you intend to fight with.

So what are the most important Glock 48 or Glock 43X accessories?

The absolute first accessory, add-on, or option that should be considered when it comes to a defensive pistol (vs. a handgun for hunting, for example) is a weapon-mounted light (WML).

First, let’s look at the lights.

For the 43X/48 it will typically be possible to add your light using the TLR-6 Universal Kit unless you have the railed version (barring the use of niche after-market products like the Recover Tactical Rail Adapter, q.v., that might be available)*.  In the latter case, you have the option of an Olight.

A 43X/48-specific light from Streamlight will be (as of this writing) available shortly, but in the meantime, one could easily make do (formerly make due) with one of the following:

• Universal TLR-6 (SKU 69277). That particular model of WML is a light/laser combo that fits a wide variety of micro-compact frames.

The early 43X and 48 did not have a Picatinny rail under the barrel, nor were they optic-ready. Later variants had the option of both. If your model does not have the rail, you’ll need to get an adapter rail so you can mount a weapon light. Here’s one option. 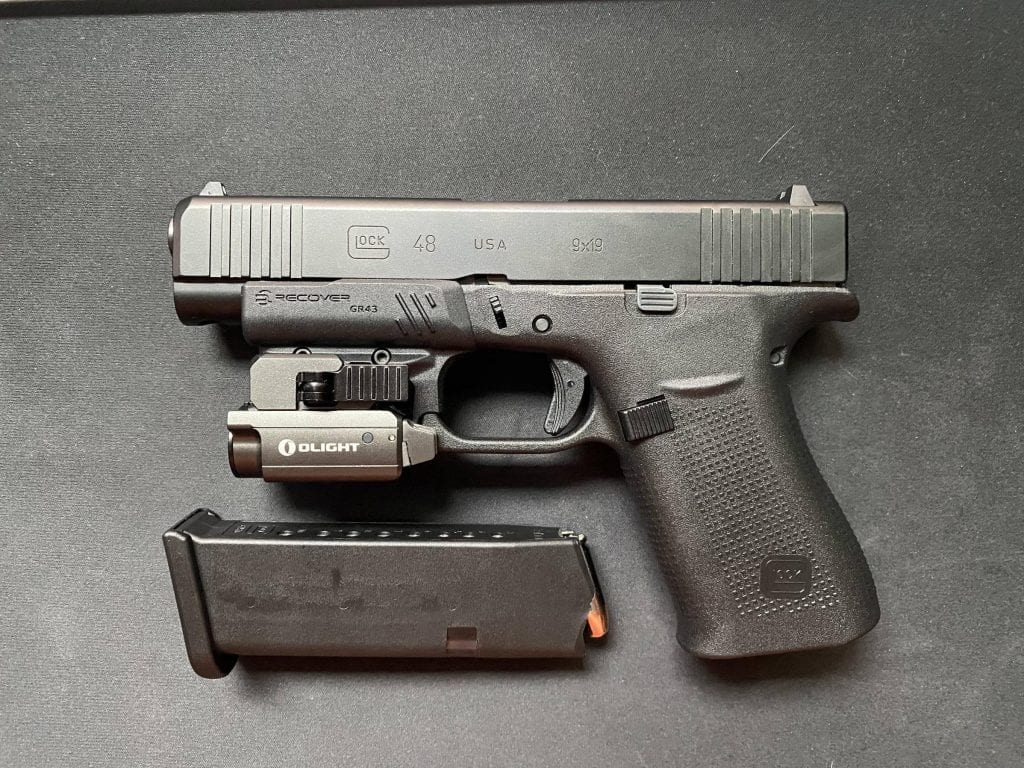 *There may be other options we’re not familiar with. If so, let us know in the comments below so everyone benefits.

In full disclosure, we should say that while most of The Mag Life crew believes an RDS to be of enormous benefit though not a necessity in the same way a weapon light is, there are those who believe it should be labeled a necessity. Particularly with micro-compacts like the G43X and G48.

As you can see from the available imagery, the addition of an RDS to a Slimline is a popular upgrade — but most of us feel it should come second to a WML.

Tyrant Designs offers a full range of handgun accessories, including these upgrades for your Glock 43X and Glock 48

This has been a collaborative effort by two or more members of The Mag Life contributor team: to wit, a JWOT (Joint Writing Operations Team). We’ll advise which specific contributors in the text of the article. Subscribe to GunMag TV and follow GMW on Instagram, @gunmagwarehouse. Connect on Facebook, /gunmagwarehouse/.