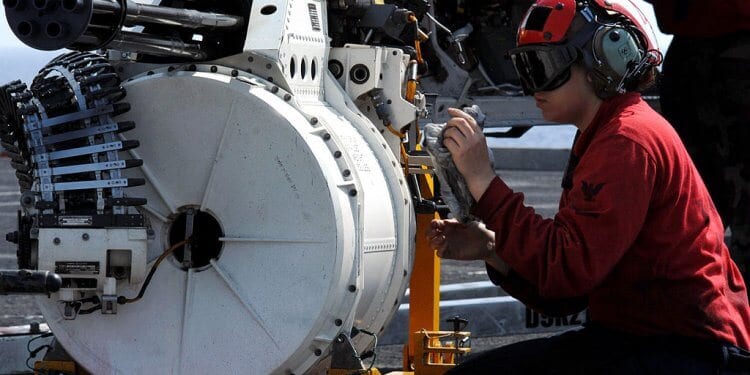 A History of the Drum Magazine

The need for increased magazine capacity

After the game-changing invention of the cartridge, and even before the development of bolt-action rifles, firearms designers tried different ways to increase ammunition capacity. The drum magazine is a mid-19th-century invention that fulfilled that need. Generally, the credit goes to two individuals for patenting the idea of a drum magazine, even if neither of their designs actually made it off the drawing board. Charles Tyler reportedly patented one design in 1853, and Salloum Dahdah patented another in 1862. However, as noted neither were put to practical use.

Now, the world doesn’t move to the beat of just one drum. Clearly, 19th-century firearms designers each moved to their own beat. This is where Lewis W. Broadwell comes in. He developed and patented the Broadwell drum, which increased the ammunition capacity for the Gatling Gun, but his design didn’t suit the job at hand. In essence, it was just a gravity-feed system put in a circle. It was reportedly prone to jamming and while it did increase the capacity, changing the magazines was a slower process than with the straight magazines. Moreover, the Broadwell design, while called a drum, was really more of a stacked pancake style magazine (see below). In 1875 the 40-round gravity machine replaced his drum and its special feed hopper.

The Soviet DP-28 featured a “pan” magazine not technically a “drum” magazine (Photo: Collection of the Author).

James G. Accles created the first true “drum magazine.” His 1883 patented Accles drum for the Gatling Gun held 104 rounds. Lugs on the carrier drove the internal impellor which made it a positive feed device. It has been compared to a brass donut and was especially reliable if kept clean. 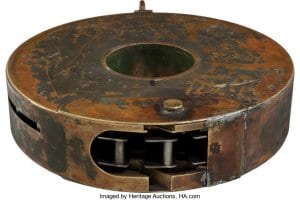 The downside to the Accles drum was that it was sensitive to dirt and service abuse, which made it impractical for field use. It was also slow to reload and complex to service.

In 1886 Lucian Bruce developed and patented a device that increased the speed of reloading the drums. He also created an adapter that made Gatling Guns compatible with the Bruce feed system. Bruce famously created a new feed system that did away with the Accles drum. The Bruce device allowed for continuous fire, as the magazine could be topped off from additional stick magazines. It proved to be the most successful feed system for the Gatling Gun, but it wasn’t the end of the line for the drum magazines.

The development of the belt-fed machine guns of the late 19th century – notably the Maxim design – highlighted the advantages of rate of fire in small arms, but it was actually a semi-automatic rifle design that led to the first successful deployment of a drum magazine.

The Farquhar-Hill was one of the first semi-automatic rifles; patented in the UK in 1908, followed by the United States in 1909. Developed by British weapon designers Moubray G. Farquhar and Arthur H. Hill, it used a recoil operation with a rotary bolt locking system. Its designers were still trying to resolve some of its issues when WWI broke out in 1914, and they tested the weapon with 65-round drum magazines. Some British aviators used it before the adoption of specialty aircraft machine guns and American soldiers field tested at least one with its specially designed 19-round drum magazine. 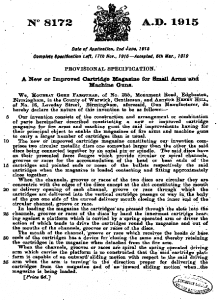 Ironically, in 1918 the British military found the Farquhar-Hill rifle was suitable for military use and ordered 100,000 units. However, the “Rifle .303-inch, Pattern 1918” – which was the official military nomenclature for the rifle – never went into full production because the war ended and it was deemed unnecessary.

In World War I, the drum magazine was adopted by Stoßtruppen (Stormtroopers) with the Artillery Luger pistol. The 32-round “snail magazine” greatly increased the ammunition capacity of the semi-automatic pistol. Then it was used with the world’s first successful submachine gun, the Bergmann MP18 (Maschinenpistole 18/I). Interestingly, noted German arms designer Hugo Schmeisser had designed a conventional 20-round box magazine but the German Testing Commission insisted the MP18 be adapted to utilize the Luger “snail” drum. 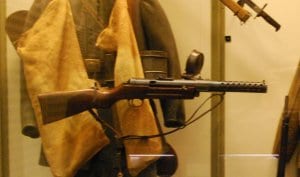 The MP18 (Maschinenpistole 18/I) was the world’s first successful submachine gun. It featured a “snail” drum magazine, originally developed for the Artillery Model of the infamous Luger pistol. This example of the MP18 is in the collection of the National World War I Museum. (Photo: Peter Suciu, National WWI Museum) 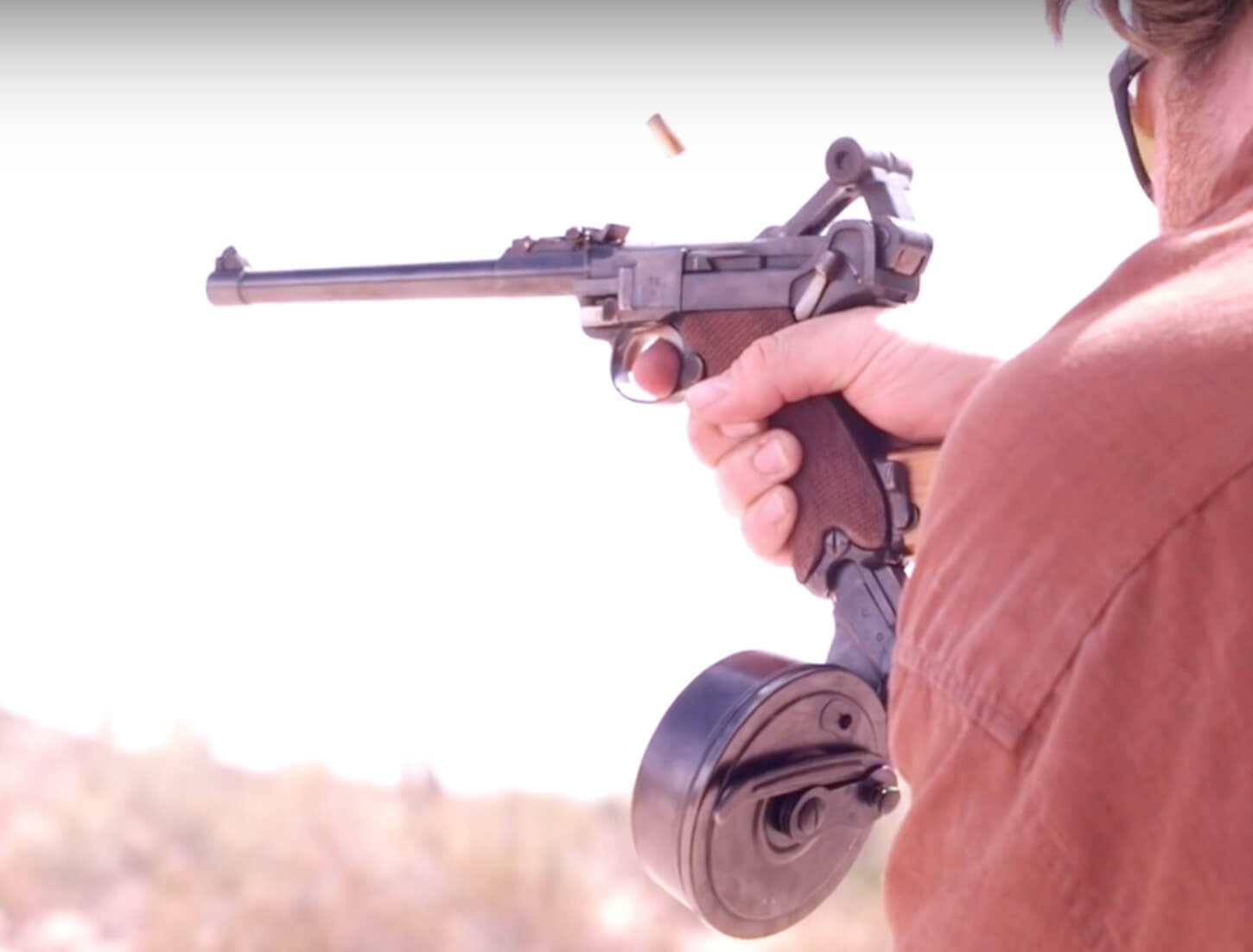 The 32-round trommelmagazin-08 snail drum was developed in 1916 to give increased firepower to units armed with the LangePistole 08 artillery Luger. Via Forgotten Weapons.

The Thompson submachine gun was also in development when the First World War ended in 1918. Its creator General John T. Thompson originally envisioned it as a semi-automatic rifle. It developed into a “one-man, hand-held machine gun” that fired the .45 ACP cartridge. Originally dubbed the “trench broom,” then “Annihilator,” it was later officially renamed the Thompson Submachine Gun. It was designed to use both stick and drum magazines. 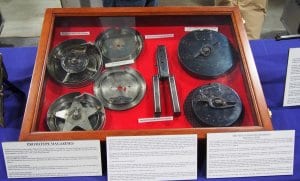 A group of prototype drum magazines for the Thompson Submachine Gun. These were on display at the Michigan Antique Arms Collectors Show and are in a private collection. (Photo: Peter Suciu)

Following the war, the U.S. military had no interest in the Thompson so it sold on the civilian market instead. However, the passage of the National Firearms Act of 1934 made owning such a firearm far more difficult. Although automatic weapons weren’t technically made illegal, civilian ownership was restricted. The Act required a “transfer” that included a $200 tax stamp. Interestingly, that remains the price to transfer an NFA device (including a machine gun or suppressor) today.

The United States military adopted the Thompson In 1938. The M1928A1 version could be used with either box or drum magazines. However, after America’s entry into the Second World War, they determined that the magazine was too heavy. Subsequent Thompson M/M1A1 versions only accepted the 30-round or 20-round box magazine but not the drum magazine. 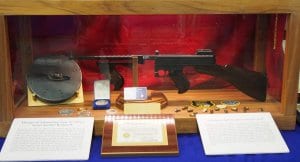 One of the two Thompson SMGs used in the infamous St. Valentine’s Day Massacre! This was on display at the Michigan Antique Arms Collectors Show. (Photo: Peter Suciu)

Beating the Drum in Europe

Across the Atlantic other gun designers considered the advantages of drum magazines. Notably, they allowed a single soldier to carry a weapon with two to three times the amount of ammunition as a stick magazine. More importantly, they could leave the magazines loaded for extended periods of time without putting too much tension on the spring. In fact, soldiers only needed to wind the spring in a drum magazine when the weapon was ready to fire.

The Finnish military adopted the Suomi KP/-31 submachine gun, and it featured a 71-round drum magazine.

The Finnish Suomi KP/-31was a reliable and rugged gun, and likely inspired the Soviet-designed PPSh-41. It used the 71-round magazine (Photo: Collection of the Author)

That weapon no doubt inspired the Soviet-designed PPSh-41 submachine gun, which became the most commonly used SMG of the Second World War. It also featured its distinctive drum magazine – and has caused confusion in the west on how to properly hold the gun. Video games and movies suggest off-hand placement on the base of the magazine. However, Soviet manuals actually instructed soldiers to place the off-hand just behind the magazine.

The Soviet PPSh-41: the most widely used SMG of the Second World War. It featured a 71-round drum magazine. (Photo: Collection of the Author)

The Soviets noted the same problems that the Americans had encountered with the Thompson. The ammunition capacity increased the weight of the weapon. Drum magazines are also more prone to jamming due to the complex spring mechanisms, and drums can rattle when loaded.

Designers also created other drum magazines besides the Thompson-style drum. In fact, the Beta C-Mag was developed prior to World War II and it is currently in use with modern assault rifles. Also known as the “saddle drum,” it features twin drums that sit on each side of the feed mechanism. The German military developed the first of these as a 75-round magazine for the MG-13 and MG-15 machine guns. The ammunition feeds by spring force, with rounds alternating from each side of the double drum to keep the gun balanced. 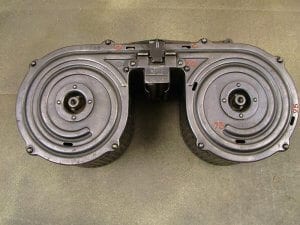 Jim Sullivan designed the Modern Beta C-Mag and patented it in 1987. It holds 100 rounds and while firing, spring-driven rotors advance the cartridges in both drums to maintain balance.

They increase the ammunition capacity of a firearm, but at the cost of added weight which decreases accuracy. Double-drums are also notorious for jamming, are difficult to conceal, and are very time consuming to reload. This is generally why in most cases the military has opted to go with sticks rather than drums when it comes to magazines.

An alternative to the drum is the pan magazine, which harkens back to Broadwell’s rotary magazine for the Gatling Gun. While erroneously called a “drum,” the pan magazine is different because the cartridges are stored perpendicular to the axis of the rotation, rather than parallel. Typically, these magazines are mounted on the top of the firearm.

While pan magazines proved a dead-end in firearms evolution, the drum magazine lives on in our modern double drums. Today, gun-hating politicians generally target “high capacity” magazines as a problem. However, in most cases, these drums still offer little practical value. 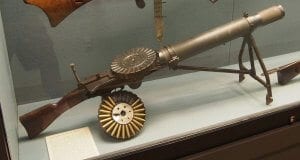 The Lewis Gun also featured a “pan” magazine. This example is on display at the National World War I Museum in Kansas City. The British Army used it during the First World War. Note how the magazine loaded. (Photo: Peter Suciu, National WWI Museum)

If you’re interested in trying out a drum magazine for yourself, take a look at the KCI AR-15 .223/5.56mm 50-Round Drum Magazine that’s available through GunMagWarehouse. Travis Pike wrote a review about it; read that right here on Mag Life!

Other Drum Magazines at GMWH:

Bang all the drums 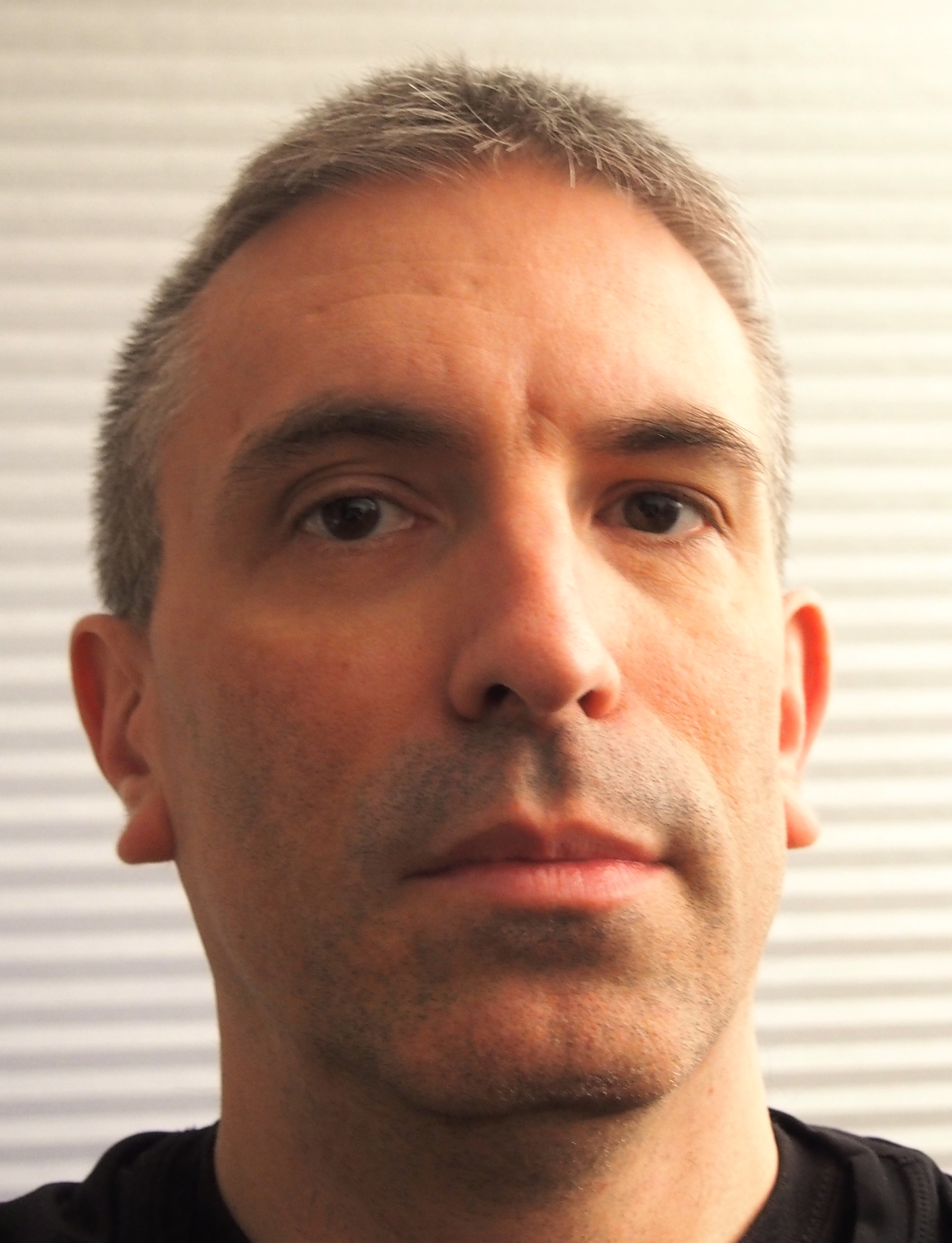