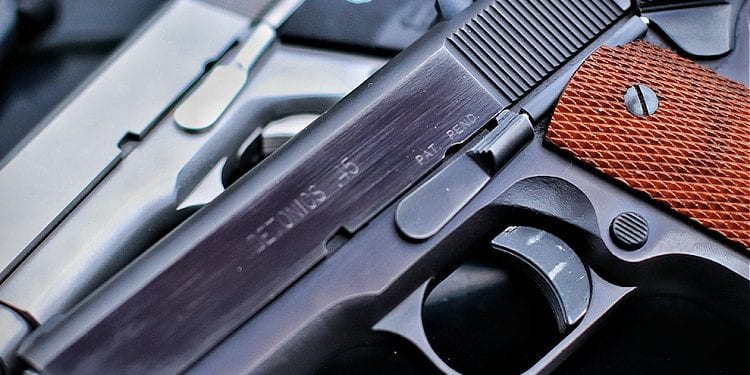 There is very little new under the sun. When we dive into history, we find the steps of our predecessors are the same steps we take. We repeat things. We make small advances. And we think we are the first. We think we have made giant leaps, yet we are mere mouse steps from our grandfathers. We do better to look back and learn. Such is the story of the Detonics Combat Master and the subcompact Glock.

Nineteen years before Glock graced us with the magical Glock 26 and 27, Detonics was doing it first. Taking a full-sized combat gun and cutting it down to a size more easily concealed. This was also being done in 9mm by ASP and Devel using Smith and Wesson semi-autos, but not in the big boy 45 ACP.

Many years before that John Henry Fitzgerald, the Archangel of Colt Mfg. was chopping small bores and big bores alike. In fact, Colt shipped its first big bore double action snub-nosed revolver in 1924. 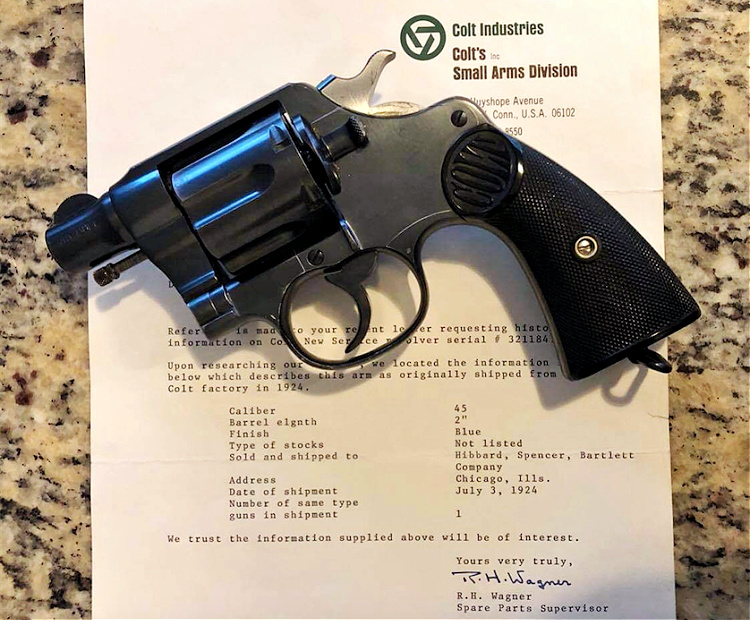 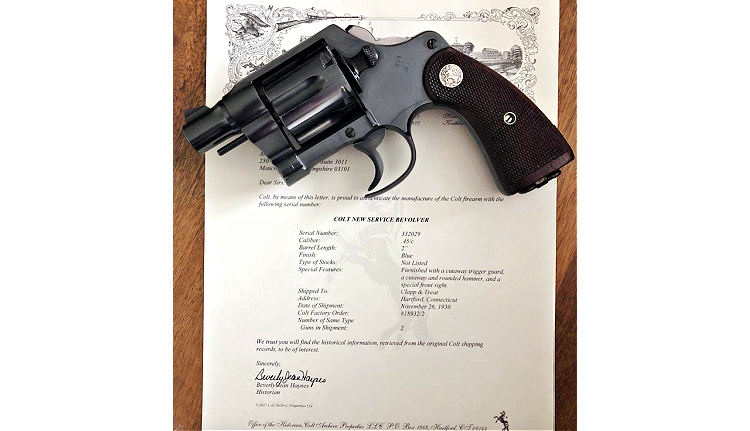 Colt Fitz- Credit to [email protected] or GSTACTICAL on gunbroker.com.

It was not a new idea, there were SAA’s built short for concealment before that. It was just a new execution, and right in the middle was Detonics. They were building something new, built on the old idea of a small hammer that hits like a big hammer.

I hit up a buddy, Jesse Starnes of Double Star Corporation, and convinced him to let me borrow one of his. Jesse delivered big time. He sent me four 1911’s. Two Detonics Combat Masters and two newly built badass 1911s from Double Star (more on those later). 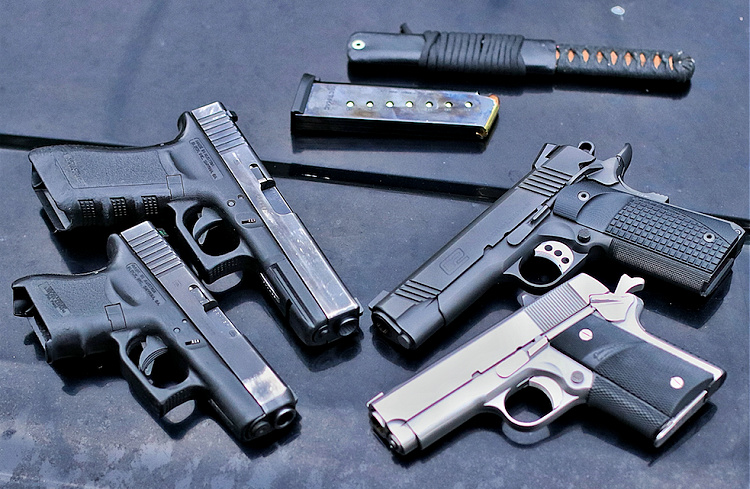 The Combat Masters came in both flavors, blued and stainless, and both appeared to be damned close to brand new. 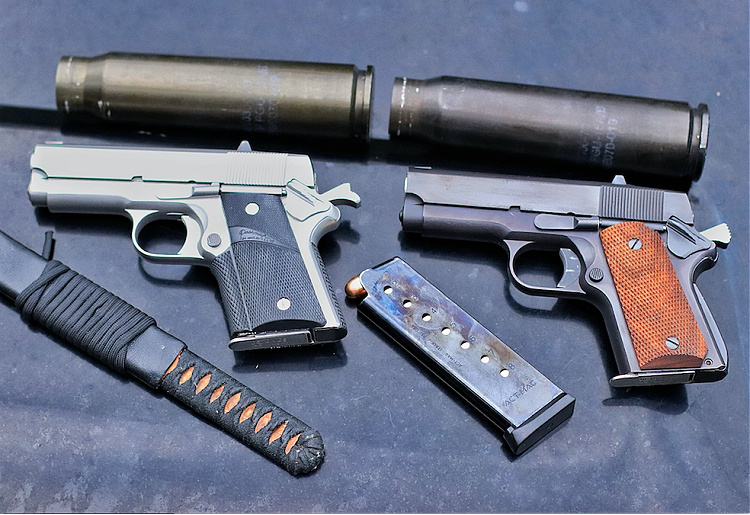 The blued gun had the same blue hue as a nice Belgian Hi-Power, and the stainless…well it looked about as good as a brand-new gun. 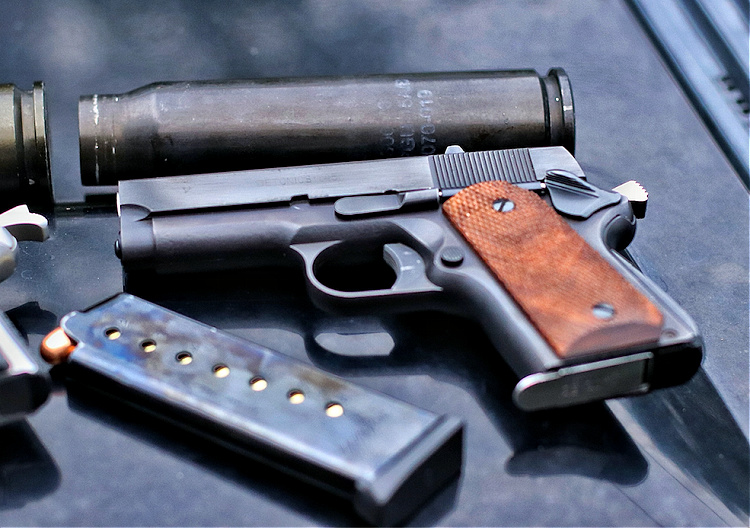 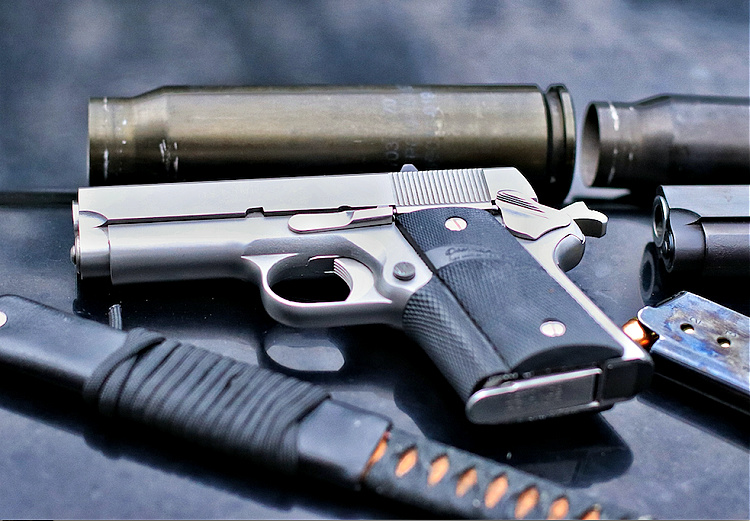 It’s always good to have a friend who has a collection deep enough to have new guns from 40 years ago.

Plenty of guns make sense on paper, some make sense in a magazine, but it’s the rare beast that makes sense in the hand and even fewer that make sense when you lift them to eye level and see the sights.

The Detonics is that rare beast. The sight picture comes up so naturally and clear that this 40+ year big old bore makes most modern compact handguns look crude and unrefined. Its capacity of 6+1 rounds doesn’t seem like a huge disadvantage when the first round is going to be a perfect hit. It just points that naturally and the sight picture is dead on.

Yet there is a cost. Recoil. This beast hits back, just like any other compact, big bore gun.

It is not by any means an everyday shooter. Anyone who joyfully plinks with it is off a little or enjoys pain. It’s not as brutal as a super lightweight .357 snub but it takes more work to control the beast.

This is where the magic comes in. It’s so much like the full-sized gun, that the practice you put in with your full-sized 1911 or your commander helps with how you shoot the Combat Master. Same controls, same manual of arms. What you learn with one, transfers over to the other. This also means it’s easier to use under stress than a completely different platform. 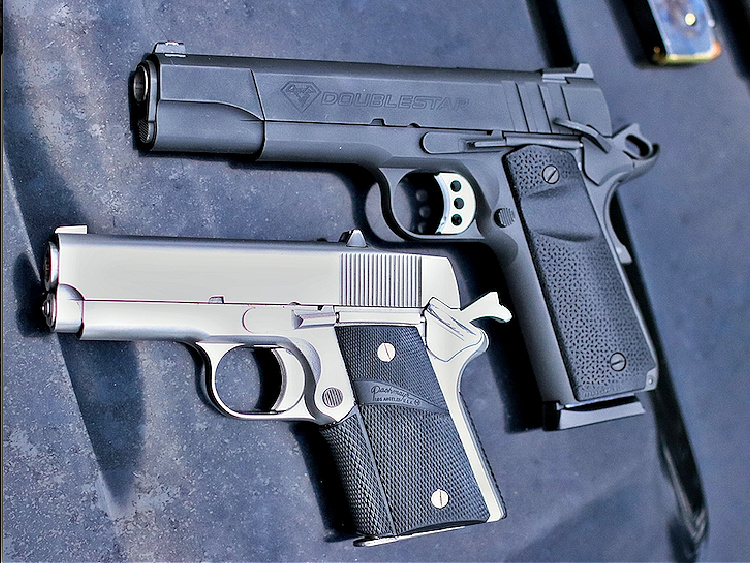 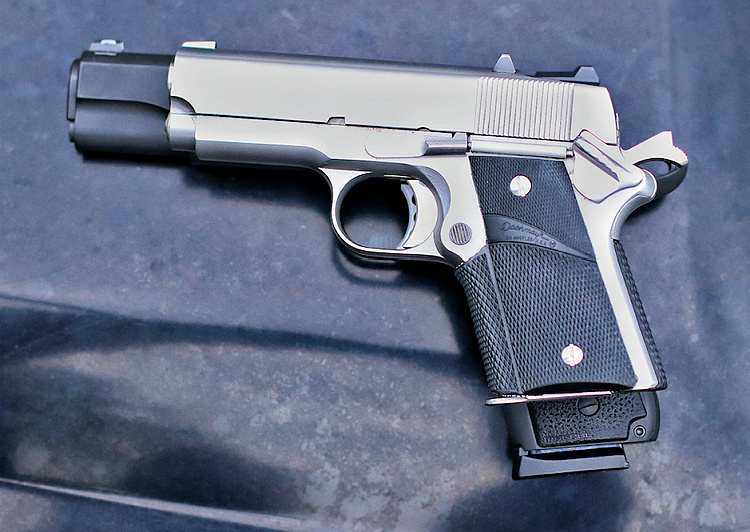 Then there is the issue of reloading big. When you top off the Detonics, you can use a regular or even an extended 1911 magazine for 8 or 10 rounds in a reload. You can even share mags between it and your full-sized duty gun. 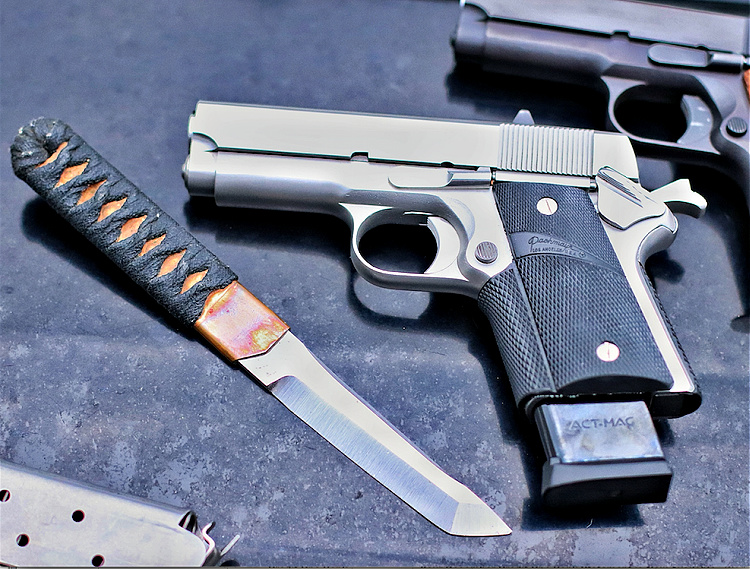 Sounds familiar? It was the big selling point for carrying a pair of Glocks. A Glock 17 and a 26 make for a heck of a pair. I personally carried a Glock 22 and 27 pair in .40 S&W because we issued the .40 S&W. I bought the 27 because it was the best backup gun as it fed from the same mags as the 22.

Just Look at the Detonics 1911 Design

The Detonics played the same role almost 20 years earlier and it was chambered for 45 ACP before we had the reliable bonded jacketed hollow points we now enjoy. Glock didn’t get around to a compact .45 until 1997, 21 years after Detonics did it. When we look at a Detonics Combat Master beside a Glock 27 it is easy to see they share some similarities in the size department. 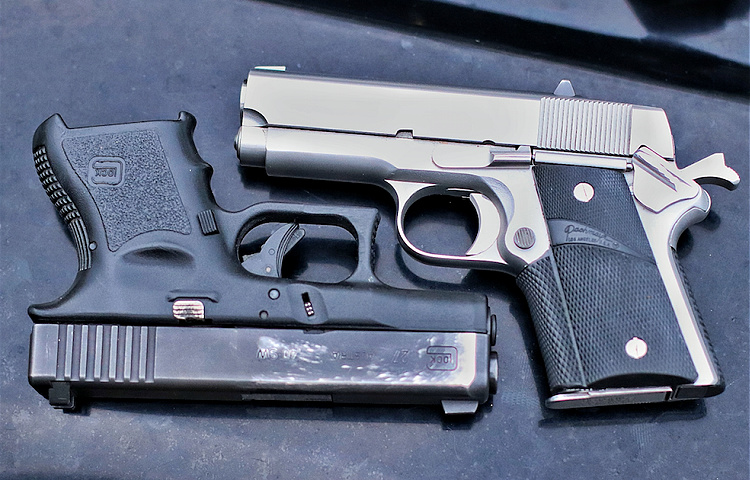 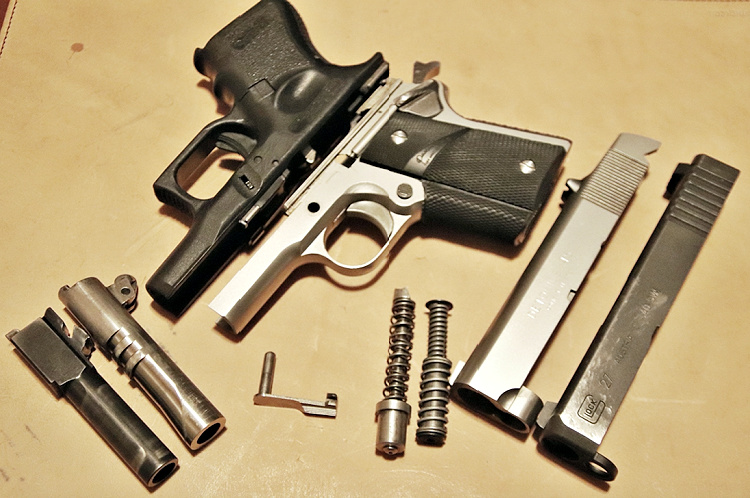 When field stripped into pieces the similarities between the Glock 27 and the CM are even more apparent.

When we compare their full-sized counterparts, however, it becomes clear there is something just right about the size ratios. It’s no doubt in my mind someone at Glock was paying attention to the past when they designed the subcompacts. Even the subcompact Glock’s use of a dual recoil spring was something first used in the Detonics. 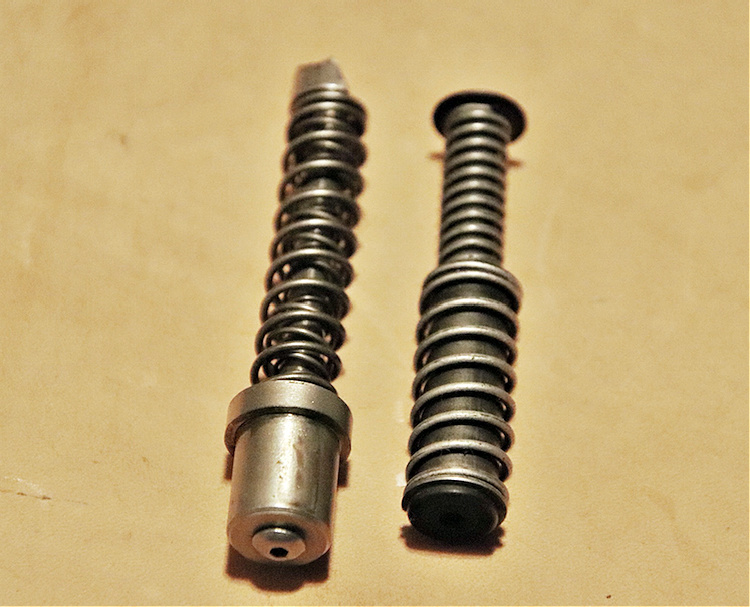 Even now almost every subcompact 1911 built uses conical barrels and a bushing-less fit. Again, something first found in the Detonics. The bushing-less fit was a hand fit. The proof is found in the hand-scribed serial numbers on the barrel in the stainless gun and the slide of the earlier blued gun. 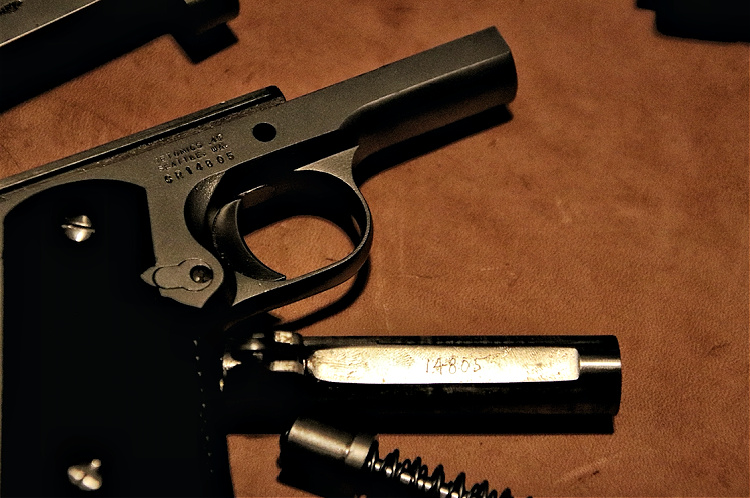 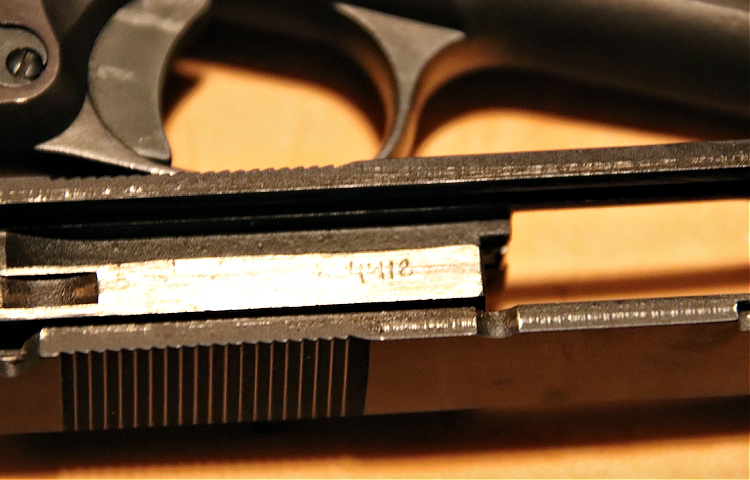 I checked with a friend who used to work at Detonics back in the early Washington era and he confirmed they hand fitted the barrels. His wife surprised him with a Combat Master a few years ago for his birthday and he made a set of stag grips for it. 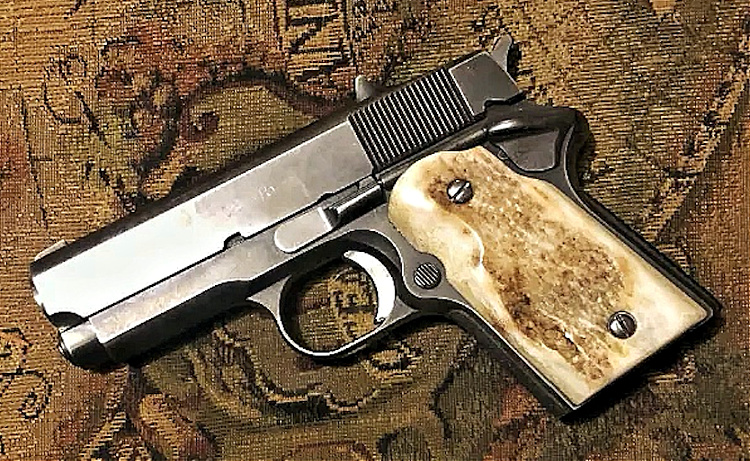 Then there are the two things the Combat Master is known for. The rear sight moved forward and the “loaded magazine indicator”.

The rear sight was simple.

Based on the tactics of the time the designer wanted to carry the gun hammer down on the safety notch with a loaded chamber.

He designed the gun so the shelf behind the rear sight was a sort of runway to use the off-hand thumb to cock the hammer during the draw. Old fix for old tactics. Oddly enough it makes for a hell of a good sight picture. As good as other famous designs like the H&K P7 series.

The loaded magazine indicator was a different story.

To get the magazine to work properly and to cut it low enough for the gun they had to leave a gap for part of the follower to stick out when fully loaded with six rounds of 45 ACP.

Later some guys realized it worked as a tactile and visible indication the magazine was fully topped off. Some guys even painted the ends of the follower red with model paint to make it more of a visual indicator. It was a happy accident at best, but it worked.

Detonics was, for a while, the best of the best.

It was the most concealable big-bore backup gun out there. It hit hard, was a shootable platform that was familiar to serious shooters, and it even took spare mags from full-sized guns. The gun was plagued by early reliability issues that were hard to fix back then, in no small part because it was a new design.

Once the kinks were worked out, however, you could tune one up and even do a good trigger job and have an excellent hard-hitting gun that concealed well.

It was smaller than a Charter Arms, five-shot Bulldog in .44 special, and it had two extra rounds. It hit harder than the Devels and the ASPs which ran 9mm.

Not bad for a gun which while a bit heavier than a D frame Colt in 38 Spl, was practically the same size. 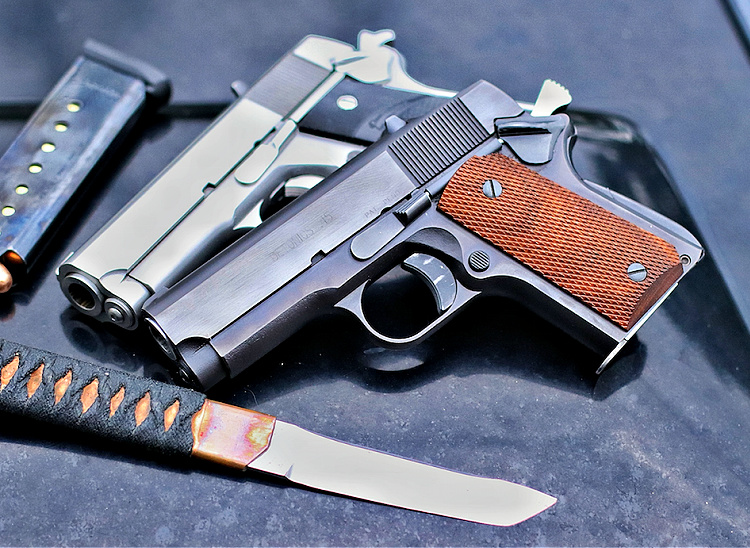 Two CM’s and a Hartsfield.

Detonics as a company went through three phases, 1976-1987 in Seattle Washington, 1987-1992 as New Detonics in Arizona, and 2004-2007 as Detonics USA in Georgia. Most “in the know” gun guys I know say to stick to the Washington guns, and they warn the earliest guns may be unreliable without work. This should not be a problem you’ll have – most of us will be lucky to ever see a Detonics in the wild and if you do the prices go a bit high sometimes.

Yet you might get lucky and find a Detonics 1911 sitting at a pawn shop just waiting for someone in the know to come in and adopt it. With a little love, it can still do the job if you can. On the plus side, it is just a great looking old school classic 1911 and a top-notch piece of history.