Beretta makes rock-solid guns. The company’s been in the business for more than five centuries. The 92 FS/M9 is iconic—even though it has fallen dramatically out of fashion. Most of Beretta’s other pistols fly under the radar. And that’s where you’ll find the Beretta APX. As far as polymer-framed handguns go, the APX (really the whole APX family) is still a relative unknown. For this review, I’ve been working with an APX compact. 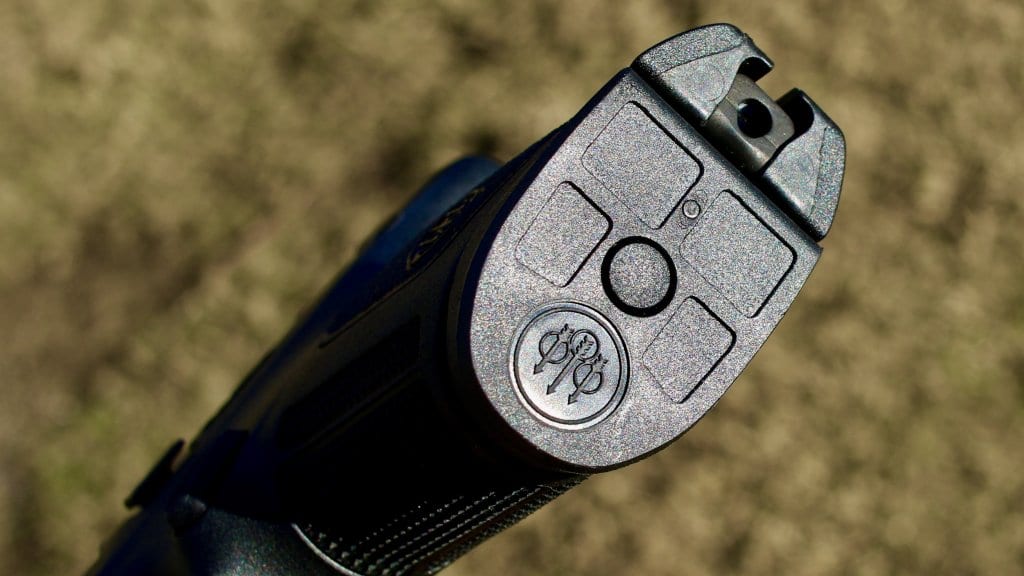 Full disclosure: I’m a Beretta fan. One of the very first guns that got me excited about guns was a 92 FS. There’s something about the lines of the gun that, for me, puts the 92 in the top five pistol designs ever (along with the 1911, the Luger, the PPK, and the… hell. I don’t know. I can’t come up with #5). I’ve owned a couple of Berettas, and I’ve got a deep respect for a company that can keep going for more than five centuries.

That said, I see their struggles. Beretta landed their massive contract with the US military at the same time that GLOCK was taking over the world. As a result, Beretta sank all of their efforts into production of the M9 and lagged behind on full-scale R&D—at least for a couple of decades.

They put out some really good guns in that time—but nothing that would catch fire. There was the PX4. The rotary barrel Cougar before that. They had some success on the EDC side with the Nano. They stand a chance with the APX. As far as subcompacts go, the APX has a lot going for it. The Beretta APX was the platform they submitted for the Modular Handgun Systems trials, but it lost to the P320.

Let’s start with the enhanced ergonomics.

The grip has a steep angle and a deep indentation high on the grip for the web of your hand. This puts your hand high on the grip and helps ensure that the barrel axis is low. Likewise, the APX has a deep cut at the base of the trigger guard that gets your shooting hand even higher. Grips like this are increasingly common and point well. The APX feels more like a VP9 or a PPQ than a Beretta 92.

The grip texture is ample. The sides of the grip have a rough texture, but the front strap and back strap are covered in fine, sharp pointed pyramids. These lock into your skin and provide excellent control.

The rest of the frame, though, is almost devoid of textures. There are small indentations above the trigger—where you would place your trigger finger before you put it on the trigger—or where you put the thumb of your support hand. These don’t have the texture needed to be truly functional, though, and are more cosmetic. 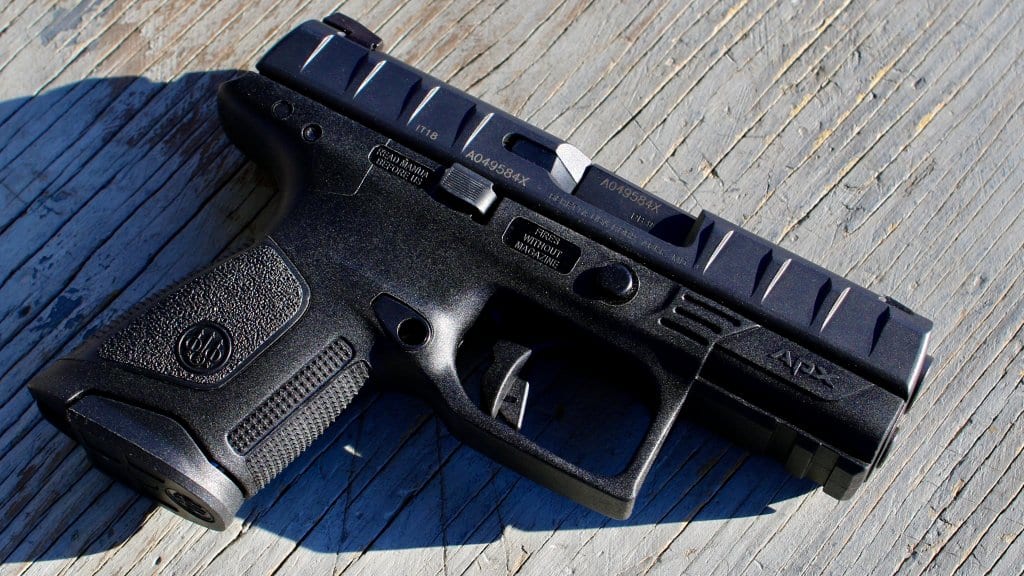 Under the frame is a small section of rail. As this is a Compact, the rail is meant for small lights or lasers. There are two slots. Most lights you would attach to this rail would add to the overall length and would necessitate a special holster.

All of the controls are built for ease of access. Since this is a compact, the controls are relatively flush to the frame. But they’re not hard to find, either. The mag release button is larger than most. Inside, the mag catch has a spring. If you hold the gun upside down and push the button, an empty mag will pop up about half an inch.

One of the most effective design elements is the slide. The sides have cuts—I guess I’d call them serrations—but they’re spaced very far apart. You can get your fingers between them. They continue up the entire slide, front and back, which helps to create the signature look of the APX, but also makes this a very easy pistol to rack from just about any position.

The magazine is a laser-welded steel design with a wide floorplate. It is easy to strip free. And the APX Compact’s mags hold 13 rounds. That’s another selling point for me. I’m all about mag capacity.

On the base of the mag—on either side—is a swell of plastic that allows you to grip-and-rip the mag, instead of catching hold of the APX’s grip during a troublesome mag change.

This is an excellent detail that so many makers simply skip over. There’s not a significant flare at the bottom of the mag well, but it is as easy to insert magazines as it is on most guns like this.

The mag release can be swapped from a right-hand configuration to left-handed. The slide stop is ambidextrous. It will still eject to the right, no matter what, but at least it is adaptable for the 10 percent.

By this point, there are a lot of holster makers that are building holsters for the APX. You won’t likely find one in a brick-and-mortar store unless you get lucky. That’s a bummer. Plan ahead.

If you own other holsters, look at those makers and see what stands out. See if they make anything for the APX. Of all the pistols that I’ve ever carried, the APX may be the easiest to lock into a custom-kydex holster. Each of the large serrations would index into molded kydex and grip tight.

As Beretta has done with many of their duty designs, they’ve made multiple versions of this the APX. There are four primary sizes of the gun available. In order from largest to smallest are the (full-sized) APX, the Centurion, the Compact, and the Carry. The Carry is a slim single-stack version. The Centurion has a slightly larger grip than the Compact. It holds 15+1. The Compact only holds 13+1. The Full-sized APX will hold 17+1.

For those who want the extras, the Beretta APX is available in a target version with an even longer barrel. Combat versions have threaded barrels, and Beretta makes some with red dot cuts on the slides, too. As with many similar guns, there are alternate colors available: FDE, grey, ODG, two-tones….

And this may appeal to some who like to mix things up. Inside the APX’s frame is a serialized insert that can be removed and dropped into another frame, should you wish. Finding the extra parts to truly make these guns modular isn’t easy, though.

This is where the Beretta comes in strong. The Compact’s barrel is 3.7 inches long. You’ve got more than that, obviously, in the sight radius—an extra two inches. The sights are steel. While the APX has a standard 3-dot sight picture, there is ample air on either side of the front sight to make good windage adjustments.

I’d put up the APX Compact against anything in its class. The trigger reset is short and easy enough to feel. The safety bar in the trigger shoe has to be pulled back before the striker will drop, and once it is pulled back the trigger eases back about .25” before it hits a wall. At that point, Beretta advertises a clean six-pound trigger pull. I’m measuring it just over six pounds, which isn’t bad. It is light enough for accuracy—or at least the kind of accuracy anyone would reasonably expect from any compact pistol. And the APX will deliver if you do your part.

If it sounds like I’m suggesting that the APX is a familiar design, that’s because I am. If you’ve handled many guns designed and built in the last ten years, you won’t have much of a learning curve with the APX. This is a well-built, polymer-framed, striker-fired pistol. In many ways, it is what it is.

But that’s not always bad. The ease of manipulation, in my opinion, gives the APX an edge. I wear an XL glove. Even so, a 1911 still feels like a handful. Though I’ve carried a GLOCK 19 for a decade, the grip still feels boxy. For me, the APX fits perfectly. I’m fast on the draw and can shoot accurately.