Gearing up to take your AR-15 to the range? Have you thought at all about going “big bore” – as in the .50 Beowulf?

If you’re looking for a sheer adrenaline rush every time you pull the trigger, know that every round isn’t created equal.

The most common choice is an AR-15 in the standard .223/5.56 NATO. It’s sufficient when it comes to stopping power, you can shoot it accurately to about 300 yards and best of all, it’s inexpensive, allowing you to get more practice in without going broke.

But there are many other calibers out there for the AR-15, and even though I love .223 ammunition, I’d be lying if I said it was the most fun to shoot. That honor goes to a round with some serious stopping power – the .50 Beowulf.

Note: this article about originally ran in August 2017. Since we’ve seen some new caliber comparison articles pop up recently it seemed like a good time to republish this. We’ll periodically update this article with links to pertinent information on other publications.

The Numbers on the .50 Beowulf

It hits with a mammoth 2,878 foot-pounds of kinetic energy, and it drops 50 inches by the 300-yard mark. This is definitely a short-range round intended for close-quarters combat, as its maximum effective range is about 200 yards, and it’s more fun to shoot between 50 and 150 yards.

What Makes the .50 Beowulf the Most Fun Round

First, a few words of warning about shooting .50 Beowulf rounds from an AR-15 – it will be very loud, meaning you better not forget to put your hearing protection on. Expect the recoil to be heavy, as well.

Of course, the noise and the recoil are both part of the fun. Shooting is always an exhilarating experience, but that’s even more true when you’re firing shots that can punch a hole in a truck.

If you just want a gun to shoot at the range, an AR-15 in .50 Beowulf will provide plenty of excitement, and you’re sure to get people’s attention while you’re there. You may have people coming up to you asking what you’re shooting. 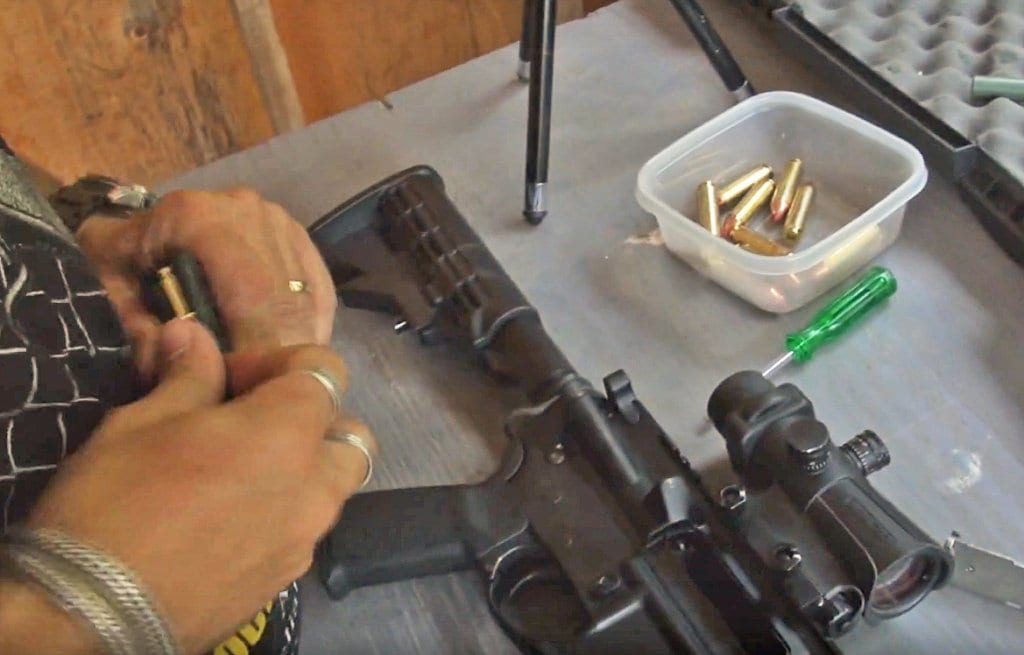 If you’re planning to go big game hunting in the near future, this round is an excellent choice. You won’t find many if any, animals that can survive getting hit with one of these cartridges.

The obvious drawback with this caliber is that unless you’re fortunate enough to have a limitless ammunition budget, you won’t be able to shoot as much. Prices for these cartridges are steep: over $1 per round and can even be over $2 per round, depending on what you choose.

One way to save a little more money for that ammunition is by choosing a more affordable AR-15 model. And one of the benefits of going with .50 Beowulf is that you can still use the same magazines that you would with .223/5.56 NATO ammunition; you’ll just have a much lower capacity.

The only parts you need to swap out to turn an AR-15 chambered in .223/5.56 NATO to one in .50 Beowulf is the barrel and the bolt carrier group. You can also simply purchase an upper receiver to swap onto your lower and make it easier.

I’m obviously a fan of this .50 version, but what’s nice about the AR-15 is that you can find a caliber to fit what you want to do with your rifle.

If you want top-tier performance from a short-barreled rifle and less noise when you fire your gun, .300 BLK rounds will be just what you need. For long-range shooting, 6.5 Grendel and 6.8 SPC are both effective to almost 500 yards.

Personally, I prefer other rifles for long-range shooting, and when it comes to the AR-15, I appreciate pure power. That’s why when I want to have fun and I have some cash to spare, I go with .50 Beowulf.

If you’re looking to learn more about this cartridge, check out John McAdams’ article on The Big Game Hunting Blog.

.50 Beowulf ammo from a shotgun?

Sam Bocetta
Sam Bocetta is a retired engineer who worked for over 35 years as a defense contractor for the U.S. Navy, specializing in electronic warfare and advanced computer systems. He teaches in Ottawa, Canada as a part time engineering professor and is the national affairs correspondent for Gun News Daily.