There’s no denying it: 9x19mm Parabellum/Luger has been the uncontested champ of the self-defense gun world for some time. Sure, there was a brief time when the 9mm throne was taken by 40 S&W, but in the end, it became all about 9mm once again. Since those days a few decades back, there hasn’t been much in the handgun market for new self-defense cartridges, but now that’s changed. In early 2022, Federal Premium launched a hot new carry cartridge: .30 Super Carry. If you have questions about 30 Super Carry ammo, you’ve come to the right place for answers.

The Company Behind the Cartridge

Federal Premium officially announced .30 Super Carry in early 2022, but the company has been well known for its ammunition for far longer. Technically, the ammunition maker was originally founded in 1916, but it was 1922 when Charles Horn took over the factory and re-founded it. That makes the arrival of the new cartridge a centennial celebration of sorts. As for the factory, it was first located in Anoka, Minnesota, and it remains there today. Of course, it’s grown some in the past century.

Today, Federal Premium is an ammunition manufacturing giant. The company is owned by Vista Outdoor, a shooting and outdoor sports family of brands that also owns brands such as Speer, CCI, and Remington Ammunition.

Federal Premium released the following regarding the launch and design of the new cartridge:

Federal Ammunition has 100 years of experience producing ammunition and is the ideal company to develop a better concealed carry cartridge for the next generation of self-defense pistols, and that’s exactly what the company has accomplished with this introduction. With so many advantages over existing cartridges, .30 Super Carry stands to revolutionize self-defense.

Mike Holm, the ammunition maker’s Handgun Ammunition Product Director, has made remarks about it as well:

The self-defense market is a driving force behind new gun ownership. When it comes to self-defense, [we’ve learned they want] that concealability, comfort in carrying and ability to shoot, 9 mm performance and the ability to carry more rounds. There is a lot here, and that is what drove the development of .30 Super Carry. Our .30 Super Carry cartridge hits like a 9 mm, which means shooters can increase capacity without sacrificing performance. With ballistics that mirror the 9 mm, there’s no doubt regarding the .30 Super Carry’s effectiveness for self-defense.

The .30 Super Carry has only been around since early 2022 and comprehensive data from numerous sources isn’t yet available. We do have the general specifications:

Although there isn’t a supply of .30 Super Carry loads on hand like for longer-running cartridges such as 9mm, for which far more options are released by known manufacturers on a regular basis. These are a few of the popular options (100 grain Federal, 115 grain Speer Gold Dot), but it isn’t an exhaustive list.

Effective self-defense requires ammunition that provides consistent expansion, optimum penetration and superior terminal performance. And HST delivers. That’s why it’s already the duty load of choice for law enforcement officers throughout the world. Its specially designed hollow point won’t plug while passing through a variety of barriers, and the bullet jacket and core hold together to provide nearly 100 percent weight retention through even the toughest materials. 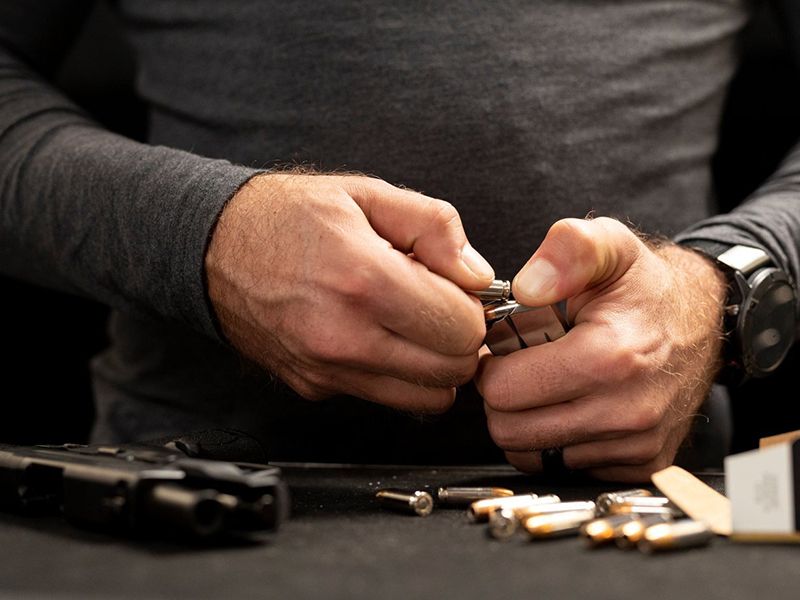 Hit your target and train harder with the proven line of American Eagle handgun ammunition. It provides performance similar to self-defense and competition loads for a familiar feel and realistic practice.

Our original Gold Dot line remains a benchmark for both self-defense and duty use, and it’s earned the trust of law enforcement world-wide. It features a pressure-formed lead core that’s bonded to an extremely uniform jacket a single atom at a time. This virtually eliminates separation on impact for more retained weight and penetration to crucial depths. Its Gold Dot hollow-point design expands consistently through the full range of barriers. Ignition and cycling are guaranteed thanks to sealed primers and nickel-plated brass.

According to Federal Premium, it has a similar, if not equal, performance to 9mm. This will vary slightly by load, but initial ballistics promise this to be true.

Is it good for concealed carry?

The team at Federal created the new cartridge specifically for concealed carriers. The cartridge delivers terminal performance similar to that of 9mm, but because it’s a bit smaller, shooters get more capacity without sacrificing weight or overall size.

Can you use .30 Super Carry for self-defense?

When was .30 Super Carry made?

It was officially launched in the first quarter of 2022.

Can you hunt with .30 Super Carry?

The cartridge was created with self-defense use in mind and isn’t ideal for hunting. Just like 9mm, 30 Super Carry is certainly capable of shooting pests and varmints the size of coyotes and smaller, but it wasn’t made as a hunting round.

Is the new Super Carry the same as 9mm?

No, it is a totally different cartridge than 9mm although the two do deliver similar ballistic performances.

Who makes a gun for Super Carry?

Quite a few firearms manufacturers are producing guns chambered in this cartridge, including Smith and Wesson and Nighthawk Custom.

The cartridge is made by Federal Premium, Speer, CCI, and Remington, although other ammunition makers will probably start making loads soon.

Kat Ainsworth
Kat Ainsworth Stevens is a long-time outdoor writer, official OGC (Original Gun Cognoscenti), and author of Handgun Hunting: a Comprehensive Guide to Choosing and Using the Right Firearms for Big and Small Game. Der Teufel Katze has written for a number of industry publications (print and online) and edited some of the others, so chances are you've seen or read her work before, somewhere. A woman of eclectic background and habits, Kat has been carrying concealed for over two decades, used to be a farrier, and worked for a long time in emergency veterinary medicine. She prefers big bores, enjoys K9 Search & Rescue, and has a Master's Degree in Pitiless Snarkastic Delivery.

AIWB: Is it a Safe Way to Carry Your Gun?