Low Powered Variable Optic: Pros and Cons of the LPVO 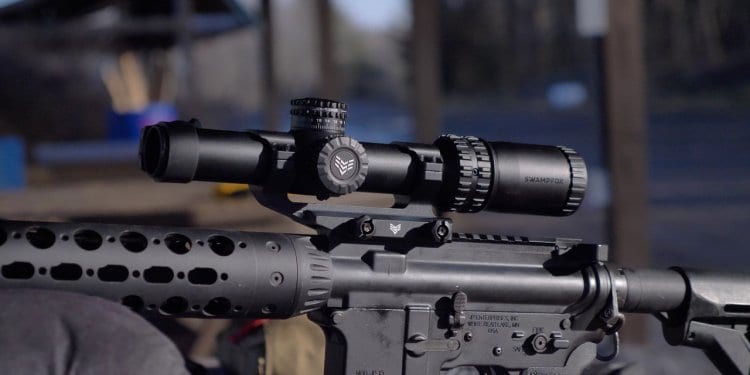 I’m not a gear guy per se. I believe that I am the primary factor in success and failure. Over time, however, I’ve come to realize that I can exert significant influence on the outcome of some situations based on the gear I selected prior to an incident. For this reason, I pay attention to gear trends. I also work to evaluate the application of new gear to my circumstances. This evaluation has led me to consider the pros and cons of the LPVO (Low Powered Variable Optic) on my defensive rifle.

Let me provide an example to illustrate the paradox above.

Although it was daylight, the man at the end of the hall was shadowed and it was difficult to see what was in his hands. He responded poorly to verbal commands with a simple, “F^&# you!” to each demand. At 30 yards he wasn’t an immediate threat from a physical assault, however, if he held a gun, well that would change things.

My partner and I were in a difficult situation. We knew there were likely to be innocent people in the building that needed our assistance, however, closing distance on this unknown wasn’t a pleasant proposition. Shooting an unarmed man didn’t rank high on my bucket list either.

I could look through the MRO on top of my rifle all day long and I wasn’t going to get an answer. I muttered a disgusted, “On me.” And waited for the muzzle release from my equally conflicted buddy. It was a shotgun. Luckily we shot first and neutralized the threat.

More luckily, the example above wasn’t a real-life use of force situation. Instead, it was a run in the shoot house at Alliance Police Training. Joe Weyer and Cory Hupp created this scenario to specifically challenge our tactics and our gear. We didn’t do everything right on that run, but it turned out ok. One of the lessons I walked away wondering about was how equipment selection might help me better address this type of problem in the future.

What is an LPVO?

LPVOs or low power variable optics are one possible solution to a problem like I described above. An LPVO provides a range of magnification to be selected by the person looking downrange. This is typically from zero to between four and ten times your normal vision. Simply put an LPVO is a low powered rifle scope. The 1x setting provides a reasonable representation of what you normally see with your eye, provides a wide field of view, and provides some kind of aiming system so you can hit your target.

By rotating the zoom ring on the optic you are able to change the magnification setting. Usually this is accomplished with a “throw lever” that makes increasing or decreasing magnification a simple and quick task. 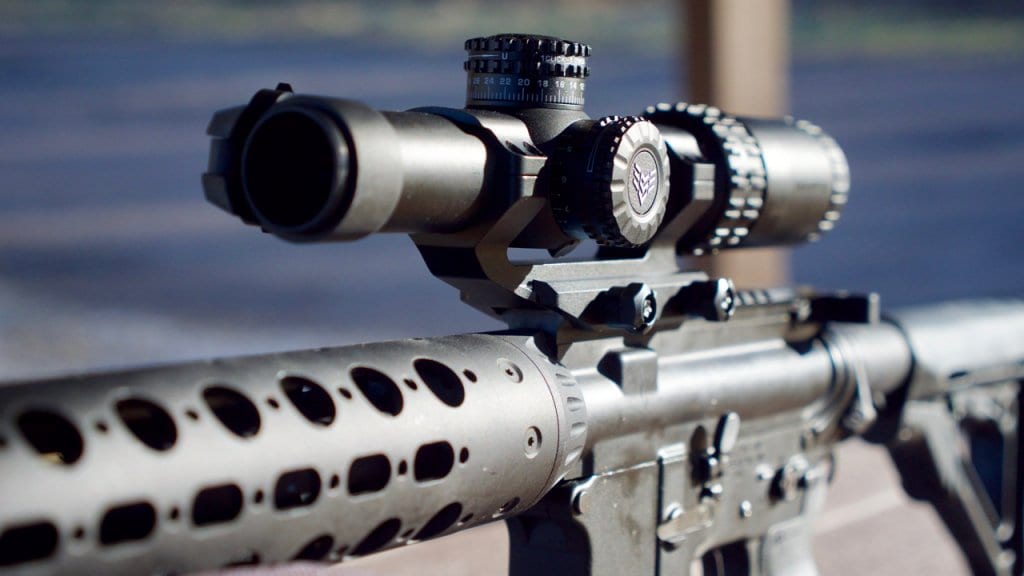 I’m not sure about the future of the LPVO in my personal equipment choices, but I do look forward to more testing and some runs in the shoot house.

As magnification increases the appearance of whatever you are looking at increases as well providing for the ability to see more details of your target and to be able to refine your aiming point.

Pros of the LPVO

There is no doubt that having an LPVO on top of your rifle can be of assistance in many circumstances. In my initial example of needing to see more detail of a potential threat is a clear cut case for when an LPVO could come in handy. What I didn’t mention about the previous scenario is that the threat was clad in body armor. This shows the other main advantage of a low power variable optic. Zooming in allows you to hit smaller targets more easily. Of course, you still have to do your work, but being able to train in on a small target and aim with precision has its advantages. At zero magnification hitting a man-size head at 50 yards isn’t a miraculous feat. However, sneaking a shot into the cranial vault which is a relatively small area can be considerably more difficult. 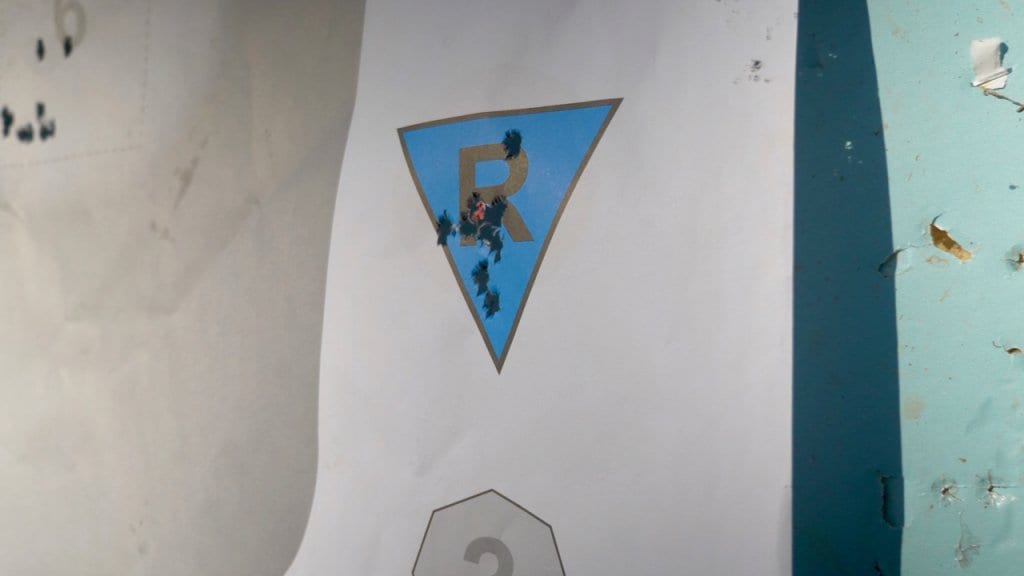 The LPVO made it easy to repeatedly hit a small target representing a headshot at distances of 15-30 yards without support.

A typical red dot at distance can actually obscure your target. A variable power optic may be the ticket to getting the hits you need.

I don’t have significant experience with LPVOs. Swampfox Optics recently provided a 1-6x Arrowhead with a BDC reticle so I could begin addressing that. It was easy for me to see how this type of scope could make difficult shots easier. In addition to being able to zoom in and discern detail while at the same time increasing aiming precision, the markings in the reticle made it easy to account for the height over bore offset that an optic creates at close distances. 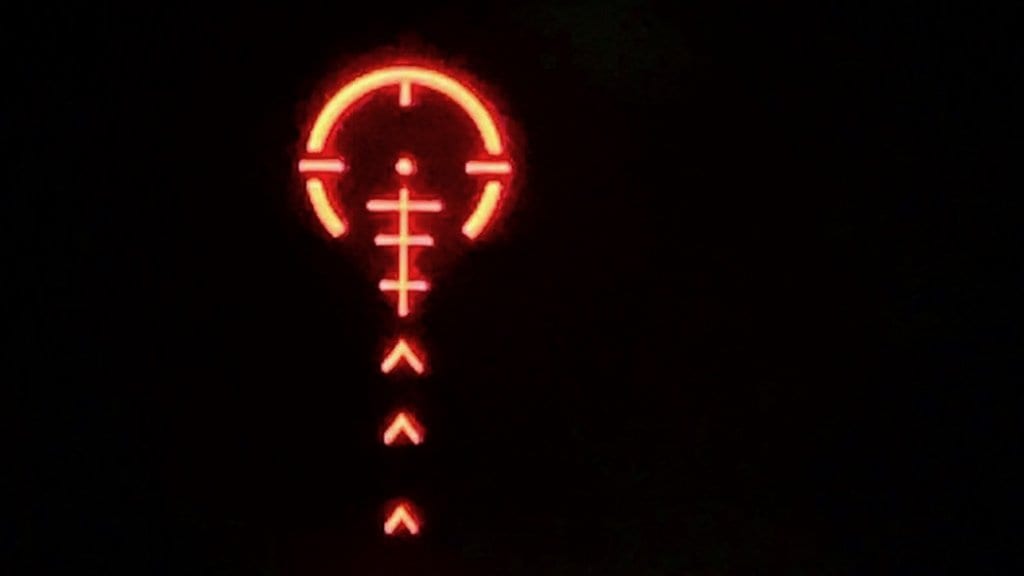 The Swampfox Guerilla LPVO BDC reticle adds some complexity to the shooters visual field at the same time, I found the third horizontal hash to be the point of impact for shots inside around 15 yards. This simplifies the height over bore issue with optics on an AR.

At 0 to 15 yards simply holding over the target was refined by using the third horizontal from the top. Instead of trying to guess how high to hold a dot over, I just defined a new cross-hair in the scope, placed it on the target and pressed the trigger. The rounds went where the aiming point was located. Very nice.

The advantages of the low powered optics don’t come without a price tag. That doesn’t mean that a low powered variable optic isn’t worth it. For some applications, the value will certainly be there. It’s your job to figure that out and part of that is knowing what you are sacrificing.

The solutions here is working out! 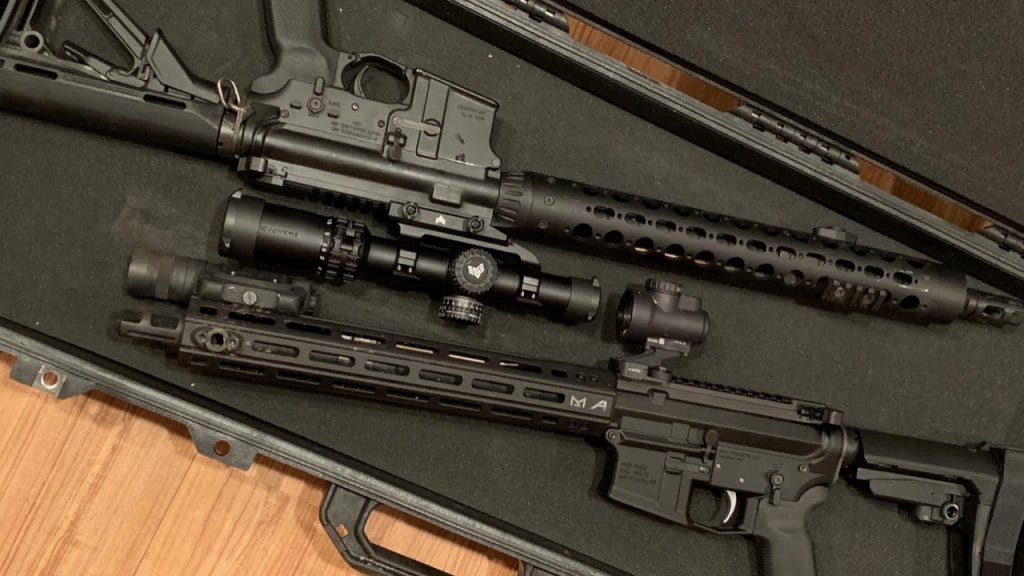 One of the negative points of an LPVO is its size. Compared to a typical red dot sight, an optic like the Swampfox is significantly larger.

With a 1x optic it is the same every time you look through it. With a variable power scope, your view may be drastically different based on the magnification you have dialed in. If you encounter a threat at 10 meters and your scope is cranked up to 6 power because your last shot was at 100 meters you may experience some frustration. 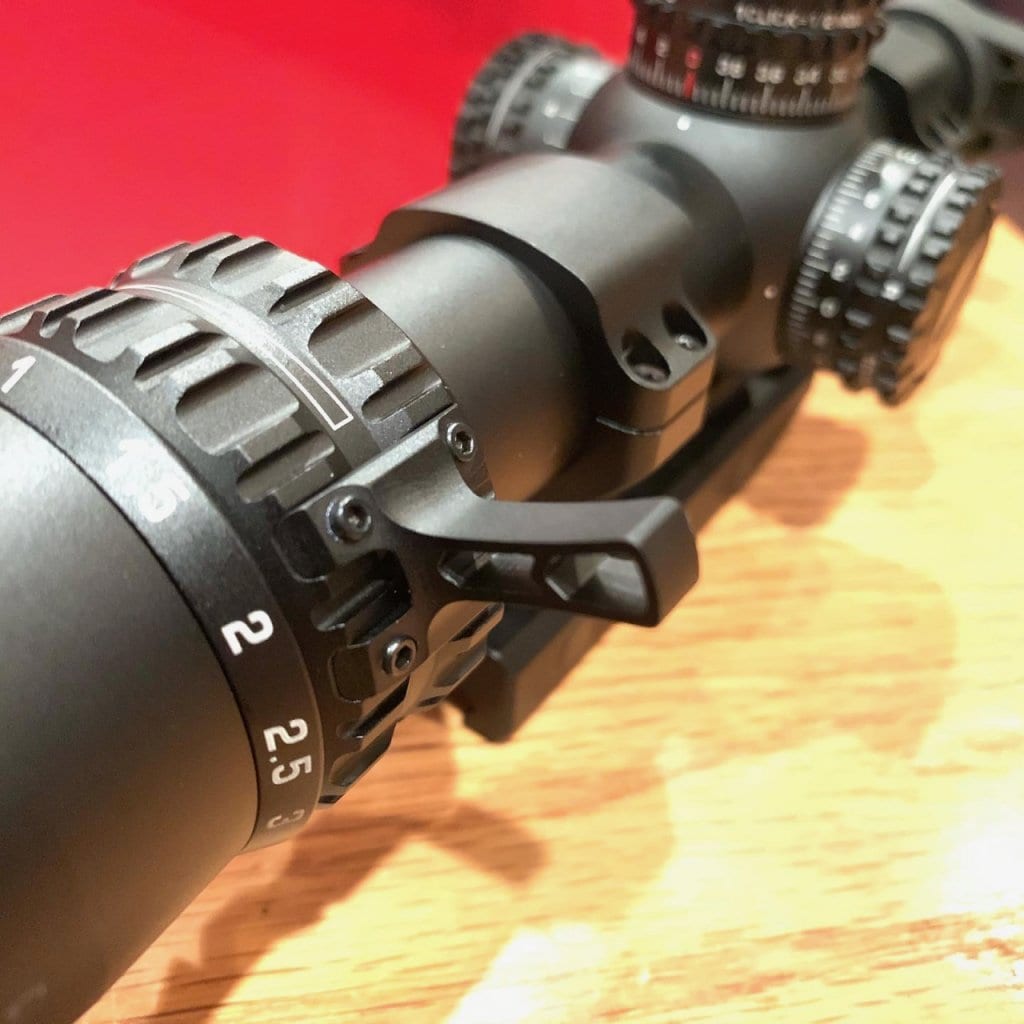 Zooming in when you need to and returning to 1x post engagement is made easier with a throw lever like this. It must be admitted that the variable nature of the scope does complicate things.

The solution to this problem isn’t a terribly difficult one. After every engagement, you must return the scope to 1x so that it is ready to deal with the widest variety of circumstances. Especially those that lack the time advantage of distance.

The biggest one I have encountered so far is eye relief. The complexity of LPVOs leads to a more defined limit of eye relief than a typical red dot sight. Eye relief refers to the distance your eye can be located from the scope and still have a full view through the glass. If you have ever looked through a scope and seen the thick black ring around the image you have peered through the scope outside the eye relief. You were either too close to the scope, or too far away. Your eye relief may change based on your shooting position. Standing, sitting at a bench, sitting on the ground and going prone may impact how far your face is from the glass and can result in limited view through the scope.

The solution here is to mount the scope in the best position on the rifle to accommodate the shooting positions you are most likely to encounter. Then practice so that you are placing your cheek on the stock in the sweet spot regardless.

I haven’t spent a lot of time with the Swampfox Arrowhead, but I can say with confidence that I am not as fast in close as I am with a red dot. I can also say with absolute confidence that outside 50 yards (probably even 30 with more difficult shots) I’m quicker and more precise with the LPVO. Other folks that have the experience to know tell me that speed with the LPVO is simply a matter of putting in the work.

The solution here seems to be range time, and I’m willing to make the “sacrifice.”

Tonight as I lay my head down there will be two rifles at the ready, my 12.5” pistol with a Trijicon MRO mounted on top and my 16” rifle with a Swampfox Arrowhead 1-6. The reality is that I can see situations where each gun is the right tool. I also know that each AR has limitations. I need to be aware of and ready to mitigate to the best of my ability.

I’ll be spending more time with the Swampfox and a host of other LPVOs as I work to find the solution that provides me the most bang for the buck.

What optic is on top of your go-to AR?

Read more about ’em on The Mag Life.