For some reason, there is some question about the usefulness of the AR-15 for hunting. I suppose part of it comes from the appearance of the AR platform since it does not have the traditional lines and wood of the stereotypical hunting rifle. Whatever the case, I’m here to tell you that the AR-15 is perfectly acceptable and in some cases even a superior choice, for hunting.

While the shape of the gun may turn some people off to the idea of hunting with an AR, the fact is the gun is very adaptable to shooters of all sizes. The adjustable stock found on most AR-15 rifles helps the gun to fit smaller-framed hunters, while the light weight of the guns is easily managed by even youngsters who are still learning.

Something else about the AR platform that has made close-in hunting easier has been the advent of red dot and other reflex-style sights. Companies like EOTech design 1x and magnifying optics that make taking the shot easier and faster than ever.

One big advantage the AR-15 has over other platforms is the ease with which calibers can be changed. For hunters looking to take varmints and predators, the standard .223 Rem cartridge is often a good choice. For someone looking to take hogs or deer, a quick upper swap will get you into a 300 BLK. For similar performance with less expensive practice, you can shoot 7.62×39 with an upper swap, dropping in a new bolt and new magazine. 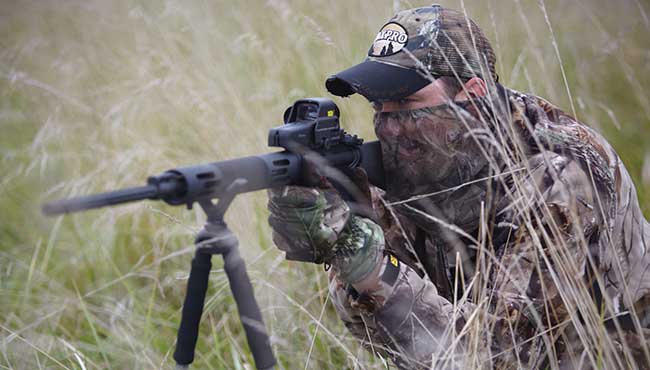 If big bore hunting is your thing, you can go with .450 Bushmaster, .458 SOCOM, or even .50 Beowulf. Looking for a long-range kill? Consider the 6.5 Grendel or 6.8 SPC. In fact, there are some very good arguments that both the 6.5 and 6.8 make the best all-around hunting cartridges in the AR.

Many hunting jurisdictions restrict the number of cartridges that can be carried in the gun when hunting. It is important to know your state’s hunting regulations and to work within those. Right or wrong, hunting with an AR-15 can draw more attention than doing so with grandpa’s old Winchester. So, you want to make sure you are within the law with the magazines you use.

Hopefully, this gives you some things to consider if you are thinking about hunting with your AR-15. Feel free to share any additional benefits you can think of in the comments section below.

Nosler: The Anatomy of a Bullet