May 13th Update: GunMag Warehouse is open and fulfilling orders.  Recent improvements have enabled us to significantly improve processing times (currently 1-2 business days).  Customer Service is limited to email only.
Shop By
Clear All 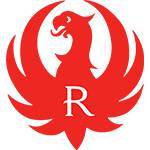