There’s a lot to consider when you’re shopping for a suppressor. Aside from legal gymnastics, you have to consider whether it’s compatible with your firearm(s), and what kind of situations you may be running it in. Here, I’ll describe why I chose the SilencerCo Osprey Suppressor.  I’ve fired thousands of rounds through it from a .300 blk SBR and .380 PPK, to a .45 Glock 21 and a 9mm full-auto MAC-11. I chose Osprey suppressor for several reasons. Here’s why.

Suppressors are a big challenge for retailers to sell.

Not because they aren’t effective, useful, or worth the cost, but a combination of wait time and misinformation keeps them out of the hands of the majority of shooters.

The wait I’m referring to is the BATFE processing time for NFA tax stamps. These $200 stickers give the holder permission to own, possess, and use an NFA-restricted item like a short-barreled rifle or sound suppressor. At the time of this article, that wait time is hovering around 280 days.

With such a long wait time, it’s important to pick the perfect suppressor to fit a shooter’s needs. In my experience, versatility trumps pure performance, provided they’re within a decibel or two of one another.

Why I Chose the SilencerCo Osprey Suppressor.

When I personally struck out to buy my first sound suppressor, I knew I wanted one that had great performance, multiple caliber compatibility, and the ability to function on both a handgun and a carbine.

For many shooters, the answer is a rimfire suppressor, but for me, it was a different story.

I bought a sound suppressor for two major reasons: the first was to protect my hearing if I should ever have to use a firearm in my home to defend my loved ones. The secondary reason was to plink at my backyard range without wearing hearing muffs.

Since I would never recommend using a rimfire cartridge for home defense, I decided to get a suppressor that would work on both my SBR in the making – a SIG MPX pistol awaiting a tax stamp – and my Glock 17. 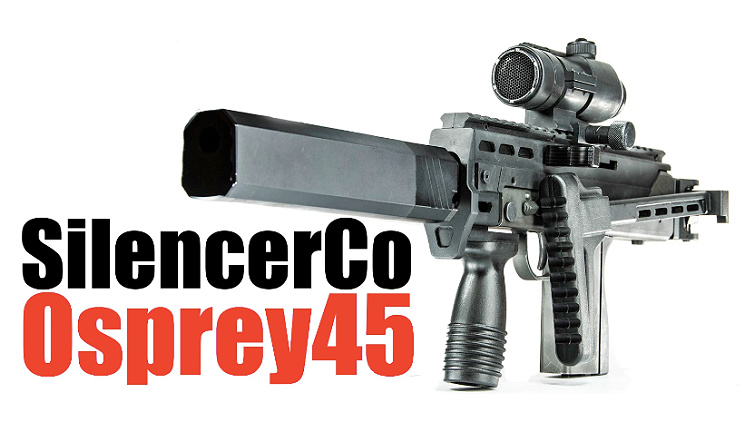 So I bought a SilencerCo Osprey 45.

I reason I went with the 45 version of the SilencerCo Osprey, is because I wanted the most internal volume possible for the best performance in sound reduction and I also wanted to be able to run it on multiple guns in the future. Plus, unlike the 9mm Parabellum version, the Osprey 45 can also run on .300 Blackout carbines running subsonic ammunition.

Like many pistol suppressors, the Osprey uses interchangeable pistons to permit mounting it on a myriad of different weapon platforms. When the Osprey is mounted on a fixed-barrel design like a carbine or PPK, the shooter needs to install a spacer between the piston and the suppressor itself.

On the other hand, if a shooter is using the Osprey on a locked-breech design, they’ll need to install a booster to make the gun cycle reliably. Both products are for sale on SilencerCo’s website, and SilencerShop’s website. Note: when buying the Osprey, shooters get their choice of either a spacer or booster – in general, you’ll want the booster.

But that’s not what separates the SilencerCo Osprey Suppressor from other designs on the market.

What helps differentiate it from other 45 cans, is its eccentric design. I mean that literally; the Osprey’s design isn’t symmetrical, and the hole isn’t in the center. In fact, the Osprey uses a friction level and camming system to allow shooters to index the suppressor any way they wish.

Inspired by the original Hiram Maxim Silencer, the Osprey is designed to keep its bore off-center to allow standard height iron sights to clear the can. In practice, this doesn’t always work as intended especially when using the oversized Osprey 45 on 9mm handguns, but it works well enough to keep them usable.

In testing, the Osprey is noticeably quieter than many dedicated 9mm cans but has the trade-off of also being much longer, bulkier and heavier.  For me, I’m not carrying the Osprey into battle. I am perfectly happy with the added bulk and weight since my end goal is performance, not minimalist size.

The SilencerCo Osprey Suppressor is awesome.

Overall, after having fired thousands of rounds through my personal Osprey from everything ranging from a .300 blk SBR and .380 PPK, to a .45 Glock 21 and a 9mm full-auto MAC-11, I’d argue it’s my favorite pistol suppressor on the market. The combination of performance, versatility, and unique aesthetics makes it just plain awesome.