Want a Great Gun at an Even Better Price? Check Out an HK USP LEO Trade-In 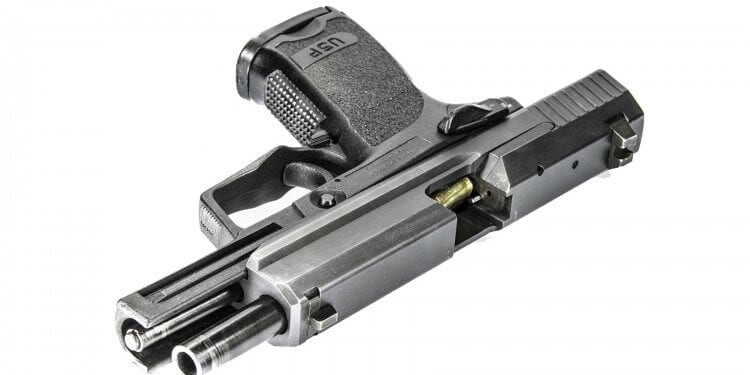 German guns like the HK USP have a reputation for being some of the most accurate, well-designed and reliable weapons on the planet – but they’re also among the most expensive.

The obvious choice is to buy a used gun, but that presents a whole slew of possible issues.

For example, it’s difficult for the average shooter to know how many rounds were fired through a particular gun, and whether or not it was properly taken care of and maintenanced at regular intervals. And while most gun shop salesman are good folk, they may not be familiar with your particular gun, or simply have no idea of a round count.

Personally, this issue is a moot one. As someone who grew up in a state with horrible gun laws that banned specific guns by name, I grew very accustomed to purchasing grandfathered guns. Still, for the uninitiated, or simply those without much experience doing so, the thought of buying a gun with unknown issues can be daunting.

Thankfully, there is a tertiary choice that combines the best of the both worlds.

LEO, or Law Enforcement Officer Trade-in guns are those that have seen duty use by police officers. Often times, whole departments decide to change over to a different handgun, and part of the process is selling the old stock to help pay for the new guns.

Why this might just seem like another name for used guns, LEO trade-ins offer incredible value to shooters. For starters, most police officers don’t have time, and aren’t funded by their departments to practice often. This means that while these guns tends to have greater cosmetic wear from being carried all day, mechanically, they are normally near perfect.

But doesn’t this apply to every former LEO gun?

It does in so much that most of these guns have seen very little use, but were carried often. But at the same time, the USP is unique in that it was designed from inception to take a ton of use and abuse, and keep on ticking.

This means that shooters are effectively getting a new gun for the cost of a used one – but not just. Because the HK USP is so damn-near indestructible, even if the officer who carried your gun previously was equal parts private Pyle and Barney Fife, the gun won’t be any worse for wear.

The Magic of the HK USP

But why would a shooter pick the HK USP in the first place, and what makes it so appealing?

The HK USP was originally designed to capture the United States’ police and military markets, but found itself being tailored to meet SOCOM’s requirements for the OHWS program.The Offensive Handgun Weapon System was a program consisting of a series of trials designed to produce a new handgun for US special forces. This handgun would be capable of serving not simply as last ditch defensive tool, but also as an offensive weapon. 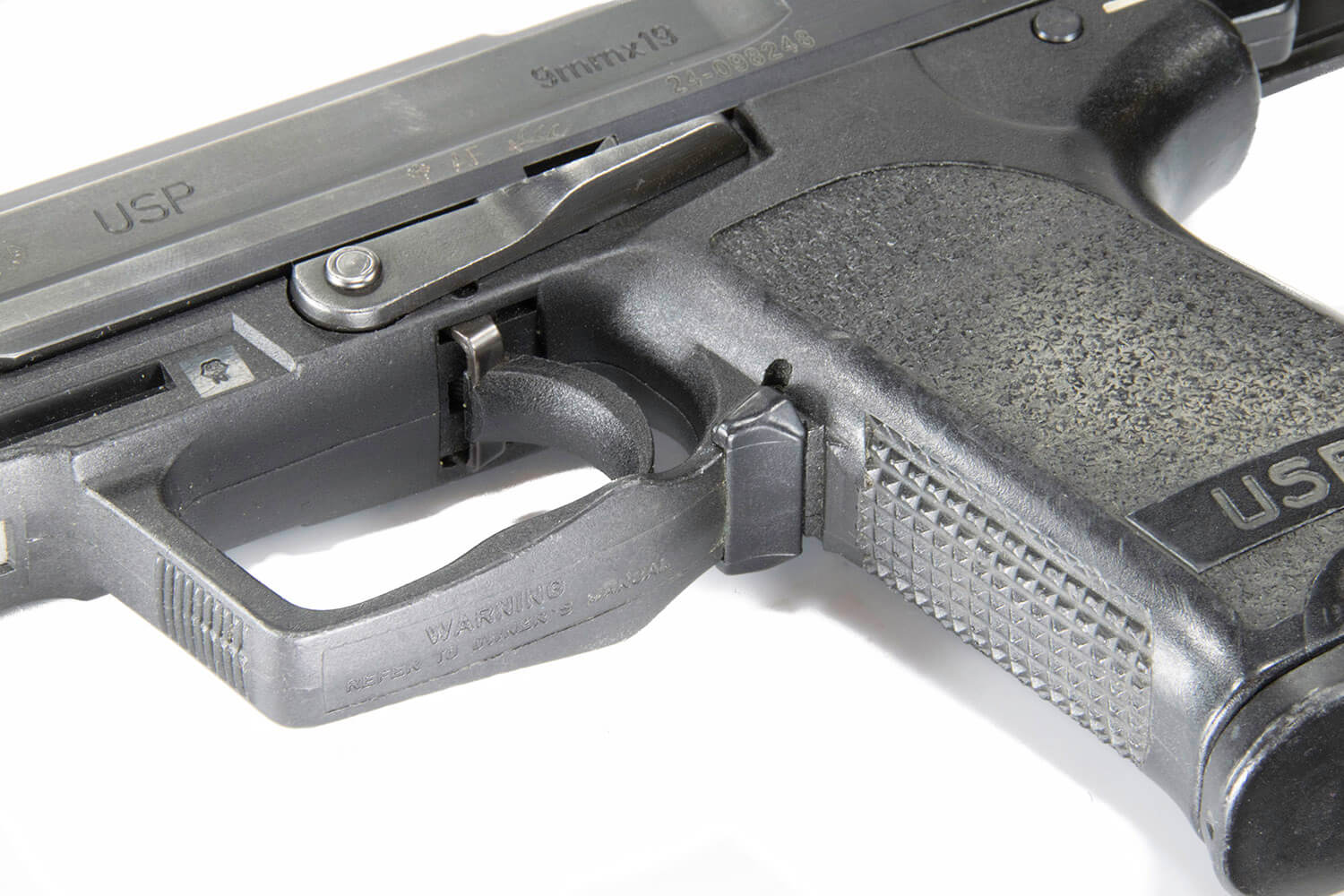 One of the only downside of the USP is the paddle release.

What does this mean for civilian shooters who likely won’t be charging terrorist strongholds with their trusty HK USP?

It means the gun has been thoroughly vetted as 100% reliable, and capable of surviving abhorrent conditions. There was even a barrel obstruction test from H&K where they intentionally fired a squib load, then cleared that bullet from the barrel with a regular round. The gun not only continued to function, but also maintained combat accuracy.

That doesn’t mean shooters should clear a squib in their pistol with another round, that’s just stupid. But, it means that even if you accidentally do this, your gun isn’t going to catastrophically fail. This by extension means that a shooter with a gun in this condition that would otherwise be left with an expensive brick, still has a function firearm.

Furthermore, shooters can assume that no matter how negligent the previous owner was, the gun will still function like the day it rolled off the assembly line. 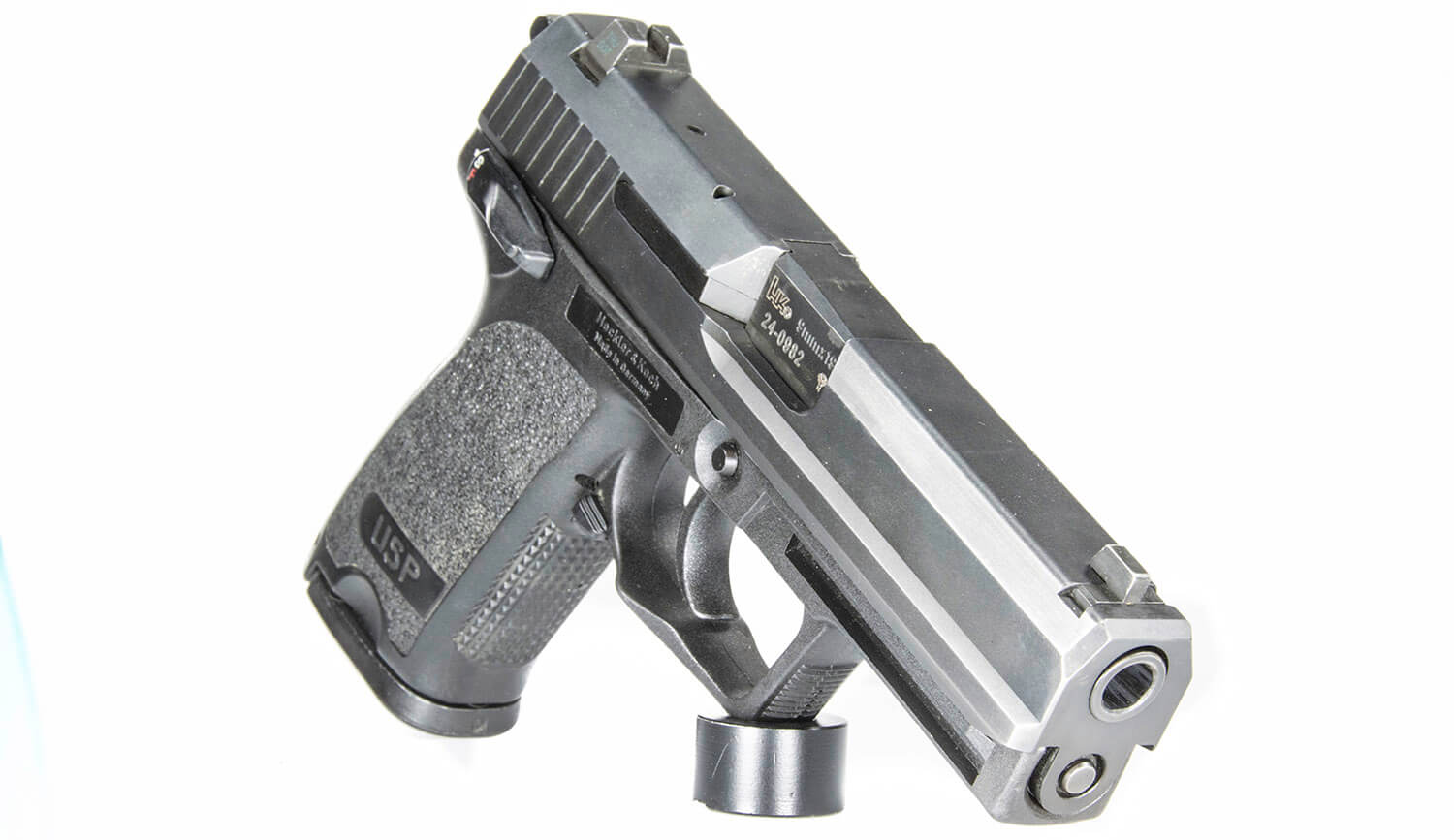 The HK USP is a solid, handsome handgun. Even with a little wear and tear from riding in an officer’s holster.

But what about the gun I actually purchased?

Well, I didn’t actually buy this gun, my best friend returning from Afghanistan did. He ordered it while deployed, and upon arriving home recently, had a chance to pick it up from our FFL. Regardless, we’ve been testing it together and seeing how the pre-owned pistol performs.

In testing, the used USP 9 encountered no malfunctions whatsoever. This was after firing roughly 400 rounds of various grains of 9mm ammunition from a handful of manufacturers. This included Hornady 147gr TAP ammo, Federal 115gr American Eagle FMJ, and 124gr Winchester flat nose rounds.

While the HK USP showed a distinct preference for the heavier ammunition, all brands produced groups under four inches at 50 yards – well beyond the intended range of most handguns.

At more pragmatic ranges, the USP produced ragged holes in standard NRA targets, and made short work of six-inch steel plates. In fact clearing the speed rack of six targets is not only effortless, but also exceptionally enjoyable.

So is the HK USP 9 a worthy buy? Whether you’re talking about a factory new, used or LEO trade-in, the answer is a resounding, “yes!”

Between its excellent accuracy, relentless reliability and military heritage, it’s a solid gun through and through. In fact, the only thing about the gun that I’m not enthralled with is the magazine release. The ambi paddle release isn’t bad per sae, but it’s tremendously unfamiliar, and thus awkward for shooters like myself with thousands of reloads on a traditional push-button release. 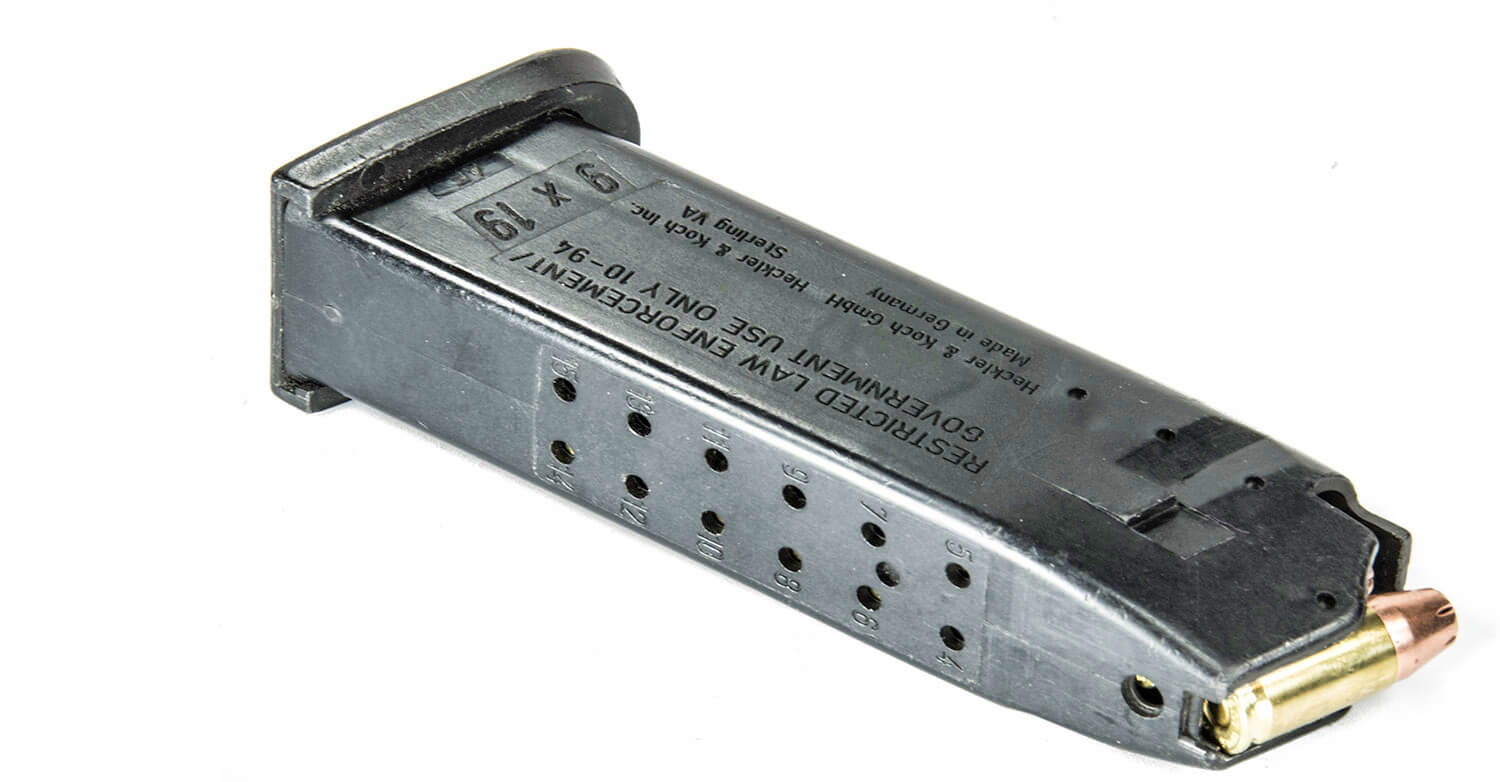 While somewhat limited in capacity, the HK USP magazines are incredibly reliable and durable.

The only other shortcoming (if you could call it that) is that the gun only features 15-round magazines. While the gun in question included three, which is great, I would prefer more capacious magazines on a 9mm, full-sized handgun. And there are other options, like this 31 round mag, but not as many options as there are for other makes.

Other than that, the gun has very few drawbacks. Most are selling for under $600, and many are under $500.

So if you can get around the magazine release, shooters will have access to a fantastic weapon with a proven track record of reliability and precision. Plus, who doesn’t want a gun used by Navy SEALs?