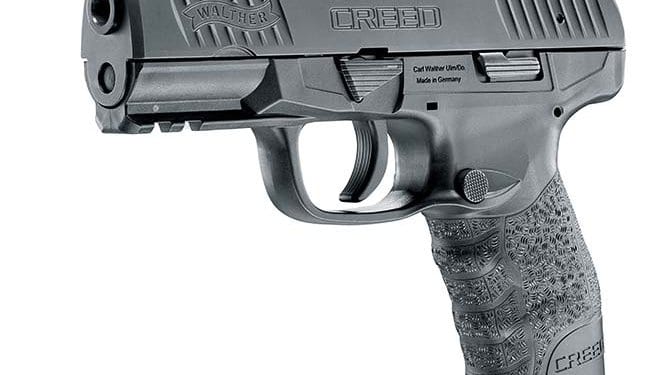 At the recent National Association of Sporting Goods Wholesalers exposition in Kansas City, Walther Arms introduced a new handgun that should have people sit up and take notice. The new Creed was specifically designed to offer all the great ergonomics and shooting characteristics of the company’s flagship pistols, but at a price that puts it within the reach of nearly anyone needing a defensive firearm.

Designing a gun to be great and inexpensive is one thing. Delivering is another. Can the Creed live up to the Walther reputation?

I recently received a Creed for testing from Walther. I’ve had the chance to get it on the range for some initial testing, and so far, I am very impressed.

Before I get into my impressions of the pistol, I better back up and explain what the gun is. The Creed is a full-size handgun that has a polymer body and a hammer-fired, not striker-fired, system.

It has a 4” barrel and a slightly blocky appearance making it great for home defense or open carry. Once security holsters become available, it may also make a very good duty gun for security and law enforcement. 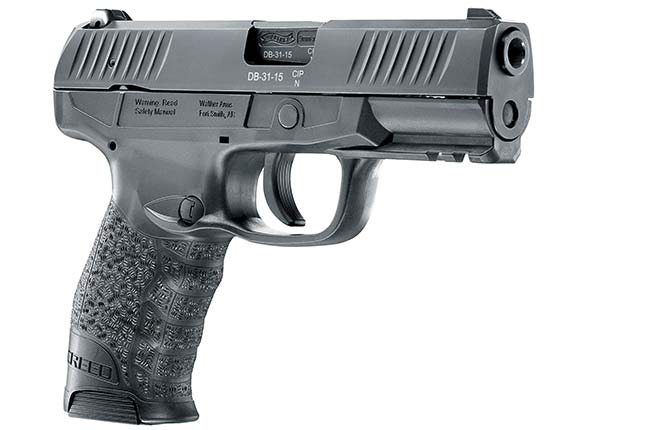 While not ideal for concealed carry, it can certainly be carried that way if needed. Under a winter coat, the gun should hide easily. A light t-shirt as a cover garment in the summer will be a bit tougher.

Although the gun is a double-action, hammer-fired pistol, it does not have a long, heavy pull. Walther uses a system that it describes as a “pre-cocked double-action trigger” that produces a pull that is relatively light at 6.5 pounds. The hammer is bobbed, and the spur stays below the surface of the slide at all times.

Creed pistols are only available in 9mm, though two models are offered. One is a standard capacity model that takes 16 rounds in each magazine. A low capacity, 10-round model is also available for residents of states that limit how many times you can shoot before reloading.

As I mentioned early on, this pistol is aggressively priced. The suggested retail price is only $399. Actual street prices could be considerably lower. Even at full retail, the price compares favorably to other pistols of its size.

One wonders where the company might cut back on production costs to get the retail price so low. Well, the slide is still Tennifer treated, making it very hard and corrosion resistant. The gun ships with two magazines, so the company did not skimp there. Likewise, the company backs the gun with its “Legendary Limited Lifetime Warranty” that includes a stated goal of turning guns around within 48 hours of receiving them for warranty work. Perhaps the cost cutting was achieved through limiting the amount of machining that goes into the slide or an improvement in polymer molding. However they managed the savings, it looks like it was worth the effort.

These guns are already shipping to dealers. Unlike some manufacturers that will make an announcement at the SHOT Show and then take months to deliver, Walther seems to make its announcements only when it is ready to sell the new gun.

A Note About Magazines

A few Walther fans have speculated about the design similarities between the new Creed and the existing PPX pistol. In fact, a few people have suggested the two guns might use the same magazine.

The Walther Creed and Walther PPX (9mm) use the same magazines.

This is a real benefit the Creed offers since many new guns do not have mags and other accessories available for months after introduction.

Well, the real proof of a gun’s worth is on the range. I’ve had the gun on the range for one session of 500 rounds so far, and plan to return soon for more shooting. While I am not finished evaluating the gun, my initial impression of the weapon is quite good.

The trigger was much nicer than I imagined it would be. Let’s face it, the trigger pull on many budget guns stinks. Not so with the Creed. In fact, it was better that many, more expensive guns.

When you work the slide to chamber a round, the hammer is partially cocked. That way when you pull the trigger to fire, there is a fair amount of take up with a short pull and crisp break. Reset is moderately short with a click that is obvious but not over done like you find on some striker-fired pistols.

Shooting the pistol unsupported with a two-handed grip gave me very nice groups at all distances out to 15 yards. Even with the winning combination of arthritis and inexpensive ball ammo, sub-3” groups were easy to obtain at 15 yards.

Reliability was 100% with all of the ammo I ran. I started with 150 rounds of SIG SAUER 115 gr FMJ and followed with another 150 of Blazer Brass 124 gr FMJ. I then ran a mix of self-defense loads through the gun for another 200 rounds. The personal protection ammo included Winchester PDX1, Federal HST, Speer Gold Dot, Federal BPLE +P+ and Liberty Ammunition’s light and fast 50 grain hollow points. Everything just worked. 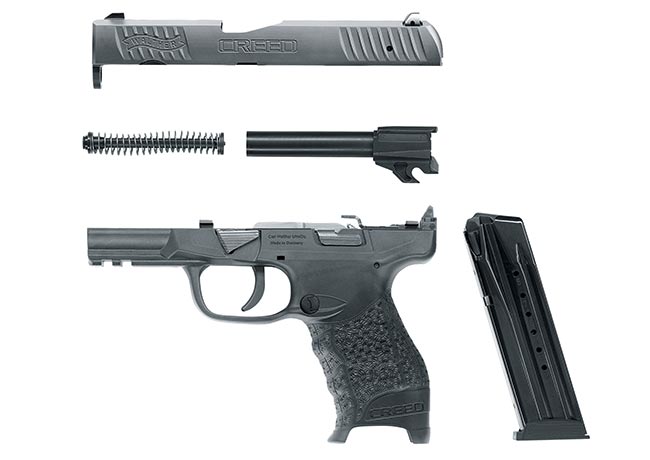 For me, Walther pistols tend to fit my hand well. The Creed was no different. While I think the styling looks a little basic, I cannot help but like the feel of the pistol in my hand. The texture provides a great gripping surface without being abrasive on clothing or my hand.

Trigger reach is an often overlooked variable when it comes to accurate shooting, and the Creed works very well for me and my medium sized hands. Everyone built is differently, but I suspect a lot of people will like how the finger is able to address the trigger face on this pistol.

One of the things I discovered about the Creed that I did not see in any of the company’s literature was the ease of slide manipulation. The slab-like sides of the slide give your hand plenty of room to grab to rack it. Beyond that, the resistance to pulling the slide back is minimal.

For an experienced shooter, slide resistance is rarely an issue. However, for someone new to the skill of shooting, running the slide can be a challenge. If the shooter lacks upper body strength, working the slide can be a significant challenge. When I handed the gun to another shooter to try, she also noticed how easy it was to pull the slide back. I consider this a real benefit.

Walther’s new creed has been 100% reliable and is a smooth shooting pistol. I am optimistic it will be as good a performer in the next thousand rounds as it has been in the first 500. If you are looking for an inexpensive defensive pistol, it is worth your attention.