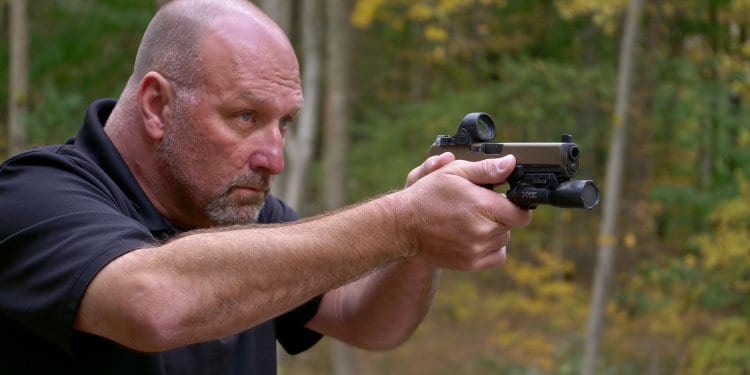 Current status: Training Day 2 of the David Maglio MAG-30 class I’m hosting with Concealed Carry Associates is a wrap. Our class dinner is complete and I’m at home. Right now I’m tired. My hands are sore. What I want to do is plow through this vodka club soda and start the next one. But…I know if I don’t note the lessons learned from my first 2000 rounds with a Trijicon SRO now, they’ll blend in with the next set of lessons — then they may be gone forever.

So I’m writing instead of drinking.

This continues my chronicling of a move to red dots. I’m writing about what I have learned and what I still need to learn after spending my first chunk of time with Trijicon’s Specialized Reflex Optic red dot sight. 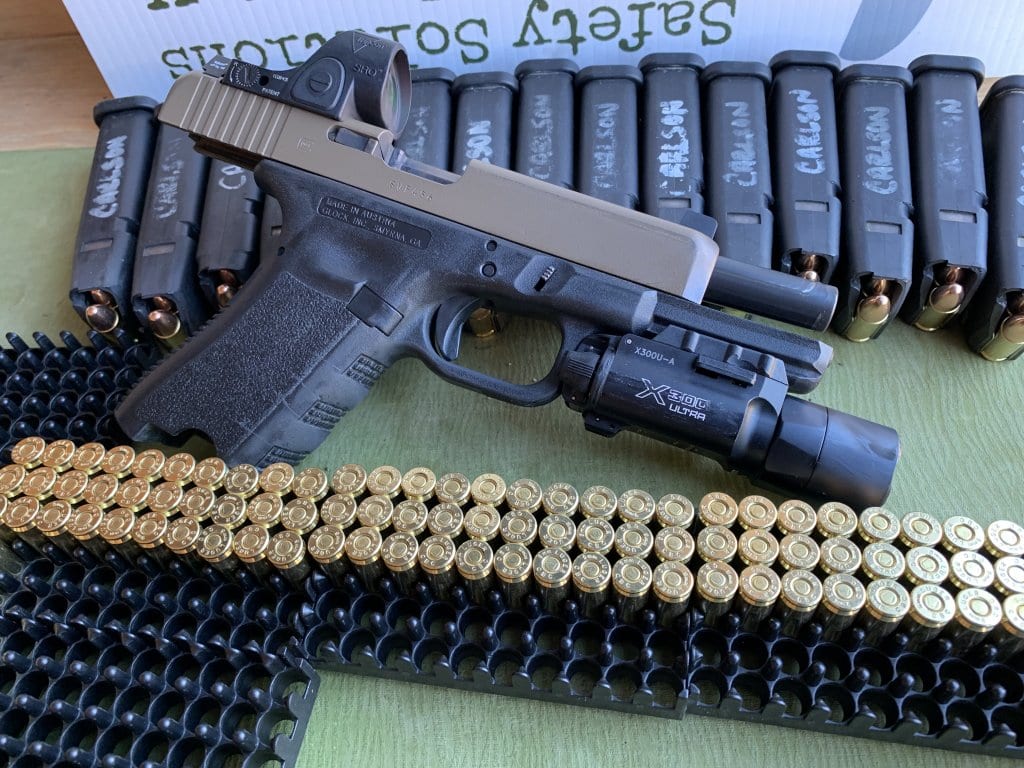 The pistol I used is a GLOCK 17 with a Trijicon SRO mounting block machined into the slide by Lone Wolf.

My gear has been running perfectly. Lone Wolf provided a slide cut in my GLOCK 17 which has been working wonderfully. 2000 rounds and zero malfunctions. Obviously the GLOCK is a solid platform, but some of the credit belongs to the Magtech ammunition provided through Active Self Protection’s sponsorship.

The Trijicon SRO has been solid as well. I have set it up in “Lock-Out” mode each morning and it has adjusted brightness for the changing light conditions throughout the day. The whole rig has been suspended by a Dark Star Gear Rigel holster which provides retention on the attached SureFire x300u—a weapon-mounted light.

The set up works, but it isn’t perfect. I have been shooting GLOCKs for years, and all those years GLOCKs have been a bit oversized for my hands. Around 18 months ago I moved to an M&P 2.0 with an Apex Trigger and finally, I had a gun that really fit my hand. I’ll say first and foremost that I wish I was shooting my M&P. I suppose that is a lesson, I’ll have an M&P set up with a dot soon.

I Can Shoot a Dot. 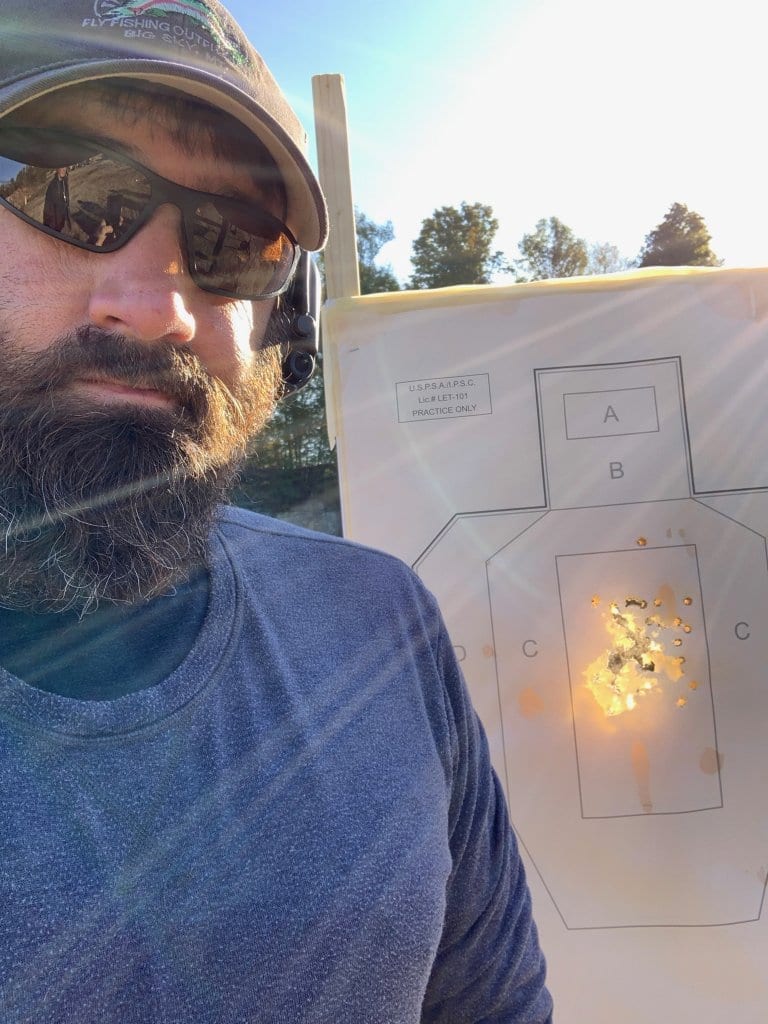 On the morning of training day 2, we began with a cold, police-style qualification. I shot a perfect score of 300.

If I try to remove the gun from the equation, the first lesson I can take away from the first 2k is that I can shoot a handgun with a red dot sight. The fact is, I am human and I want to do well for myself and also for the approval of my peers. Walking into a 3000 round class with a gun and a dot that I haven’t spent time with is a bit intimidating. I’m glad I can manage the tasks with this system.

So far we have completed three 60-round police-type qualifications with distances from 4 to 15 yards in multiple positions. The perfect score on each qual is 300 points. To this point, I have scored 899 out of 900. To this point I haven’t felt any time pressure in the qualifications. However, that doesn’t mean the quals are “easy”. They required my attention throughout and the SRO helped me with that attention, but more on that in a bit.

Pick Up the Dot Early. 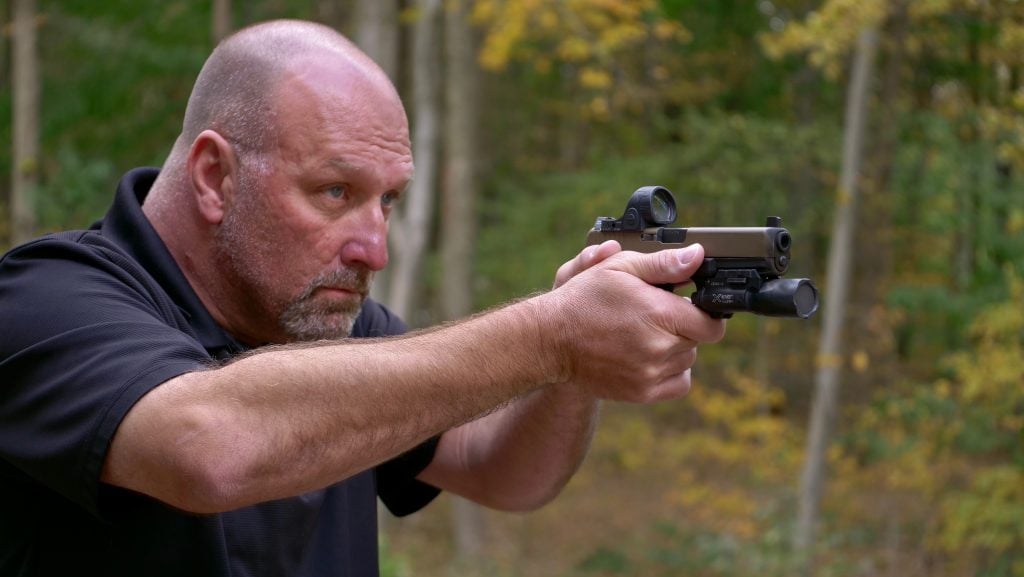 David Maglio demonstrates an appropriate presentation of the handgun. Aligning the sights when pressing the gun to extension helps me to pick up the red dot early.

This is my philosophy with iron sights as well, but it seems to be a bit more challenging with the dot. The faster I pick up the red dot in my field of view, the more quickly I’m going to be able to get the dot on the target. The main difference between the dot and irons is that the gun has to be parallel to my line of sight to get the dot. This requires attention that isn’t required on a traditional sight handgun.

With your standard pistol you can pick up your front sight easily even if the gun is skew to your line of sight. It feels natural for there to be a slight muzzle up orientation to the gun when driving out to extension. I’m not saying there should be, it simply feels natural and tends to occur. It is easy to get my front sight early in this manner. With a dot? Forget it. The gun has to be parallel with your line of sight, or you aren’t going to see that dot until you are extended.

This takes practice. Imagine that. 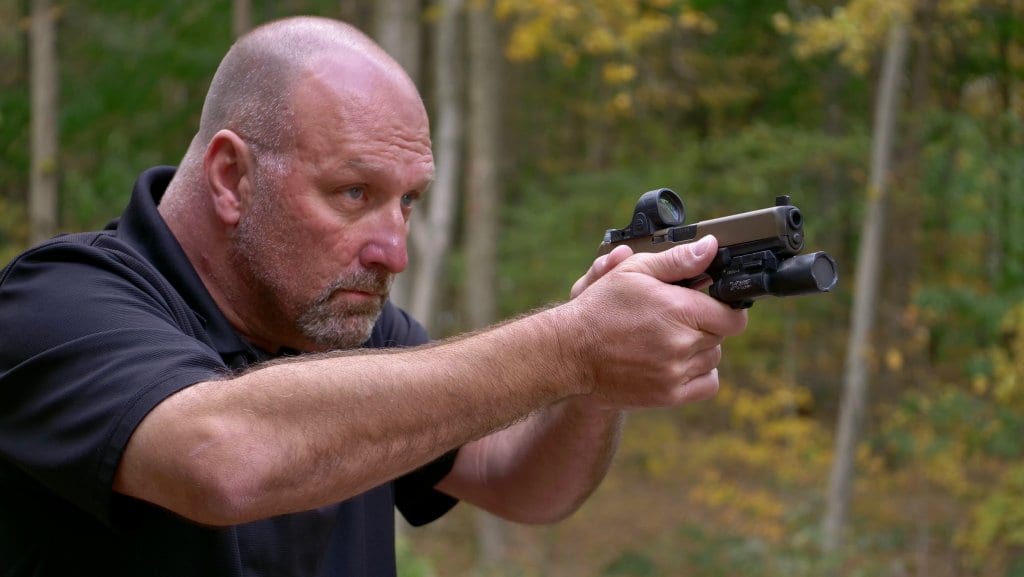 Here David shows the typical presentation of a handgun with the muzzle slightly elevated. This makes it difficult to see the dot until you reach full extension. 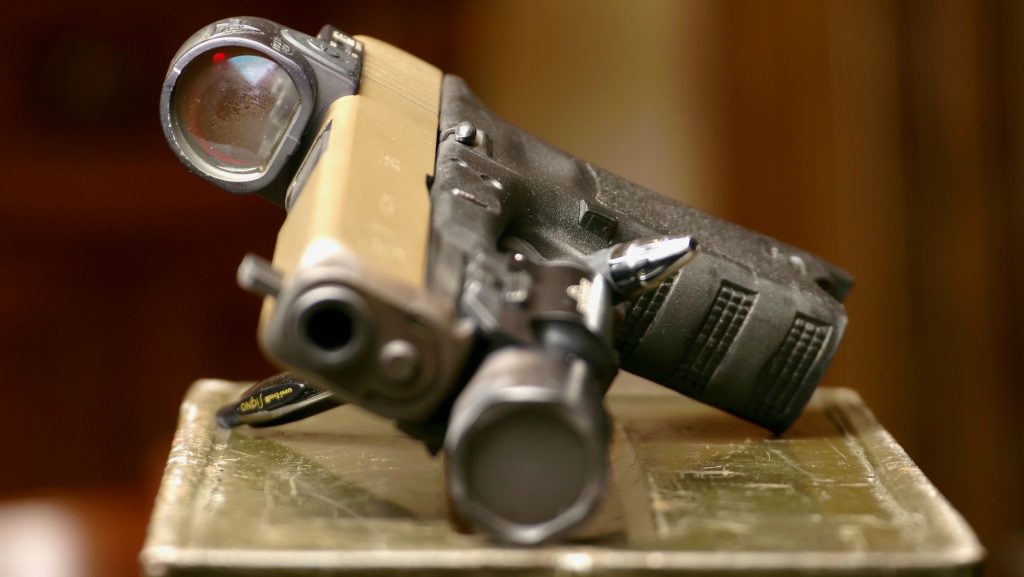 You can easily see the carbon build up on my WML. Less obvious but still noticeable is the film on the front element of the SRO.

After around 1000 rounds I noticed that the front of the glass on my dot was showing significant clouding due to carbon from my gun. This was not noticeable during strings of fire, however, I could see it easily when I was drawing my gun from the holster in preparation for strings of fire that began from a ready position. I know that Trijicon works to build optics with clear glass that enhances your vision. Why in the world would I want to downgrade their efforts and my ability to see with a dirty window? I don’t want to. So I cleaned my RSO at the end of each training day.

This isn’t a big deal, BUT, when you consider the fact that I won’t do any other maintenance to my gun throughout the 3000 round weekend it is notable. When running a dot, I need to keep it clean. 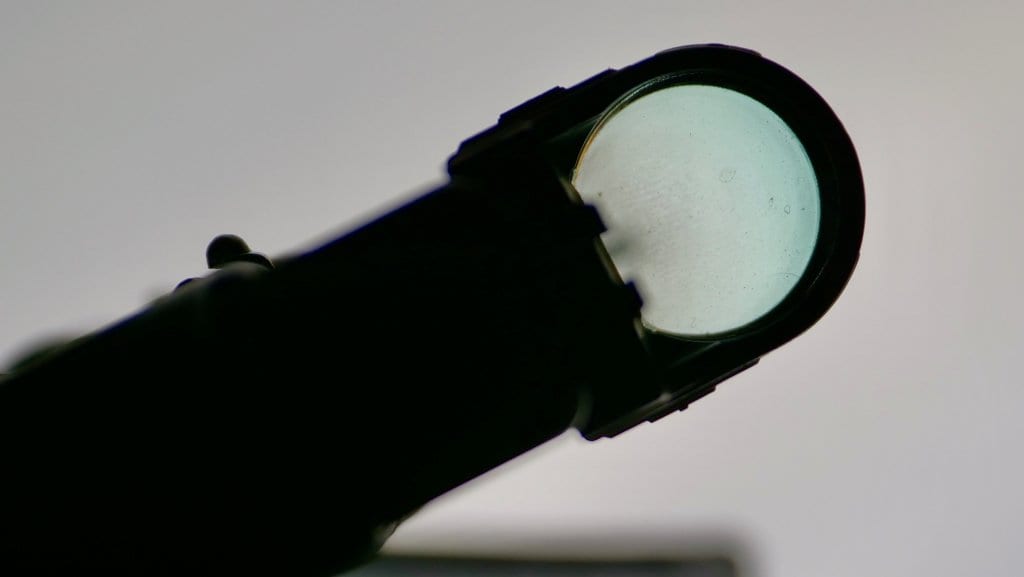 The haze is noticeable when looking through the lens of the Trijicon SRO. Keeping your lens clean is an important part of running a red dot.

Improvements at Distance, Struggles in Close.

At distance, my groups were significantly better than with iron sights. We fired hundreds of rounds at 15-25 yards and with both hands on the gun. I was keeping 95% of my hits in the A-zone of a USPSA target. When shooting one-handed my A hits dropped to closer to 75%. This is a significant improvement over where I would fall with Iron sights. I would expect this trend to continue as the distance increased.

In close was another beast especially when I was working with only one hand.

At closer ranges, I was working at a faster pace and that made it more difficult to pick up the dot initially. Also, with only one hand on the gun, it was difficult to keep the dot in the window. I found myself aching for that dot and feeling as if I was searching when I wanted to be shooting.

I firmly believe that with effort I will be able to pick up the dot more quickly and track it in the window more consistently. That is part of the lesson. A red dot is not a plug-and-play solution. 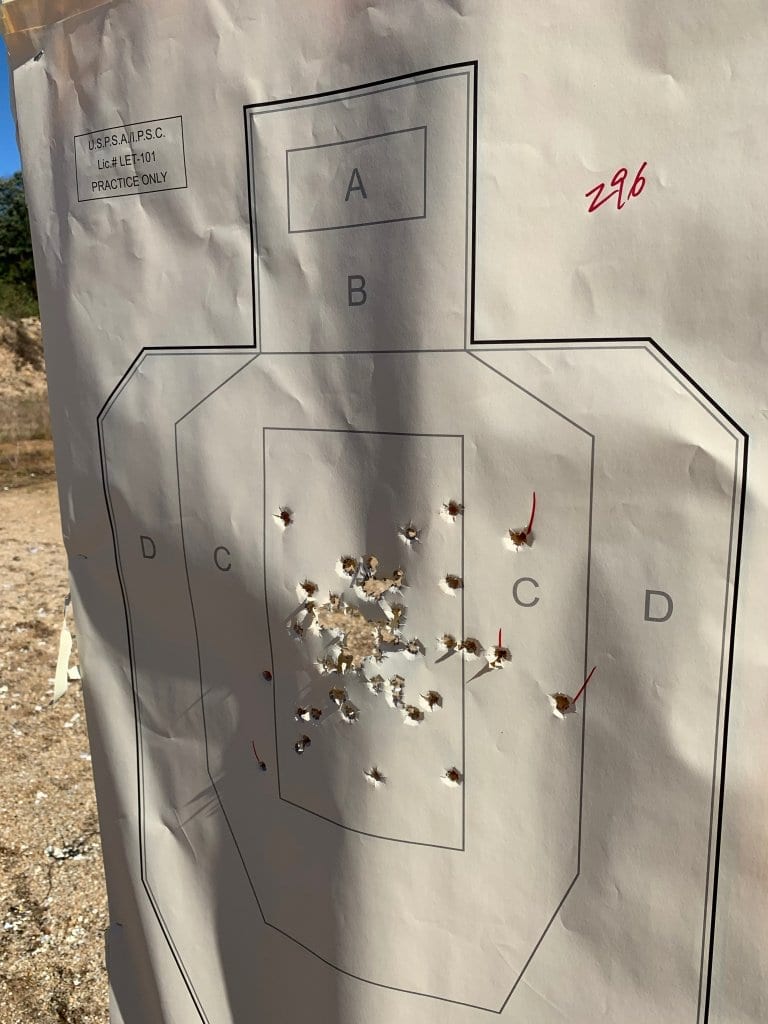 I haven’t mastered the red dot yet. At full speed I had a tendency to miss when shooting one handed. It cost me.

I Had More Mental Energy for Monitoring my Fundamentals.

I mentioned above that the Trijicon SRO helped me with attention. This is where I saw the greatest benefit of the red dot. I like to think of attention as a finite resource. There is only so much attention to go around. If I don’t have to dedicate attention to aligning the front sight blade in the rear notch, that attention can be dedicated to another important area. Grip? Trigger press? Or in the real world, making important decisions that need to be made — like when to stop shooting.

I am a huge fan of simplicity in defensive guns. In many ways, a red dot sight is a much simpler sighting system to use than the traditional notch and post. This simplicity leads to mental efficiency and I appreciated this as I approached the 2000 round mark. I had some brainpower to spare.

I got a lot of reps with the SRO this weekend. Not all of those reps were quality reps. I definitely feel like I pushed into speed, especially with primary and support-hand-only shooting, too soon. When I was shooting one-handed fast, luck was a factor in my success. This is not a winning strategy. There is no doubt in my mind that time must be spent earning the right to see the dot when you are shooting in a less stable manner. As with most things in life, if something is worth doing it is worth doing right. Live that truth when it comes to your dot. Get the reps and make sure they are quality reps that are reinforcing the habits you want to build.

The Trijicon SRO is impressive. I have spent little time with dots, but I can already see how its design helps users learn to use a dot more quickly. There is more work to do with the red dot. My next step is to seek out some professional opinions from folks that really know what they are doing when it comes to teaching people how to shoot with a slide-mounted optic.

Are you a dot shooter? If so, what are the most important lessons you learned early in your red dot adventure? Share your experience in the comments.

What red dot questions do you have? Read more in our red dot sight series.