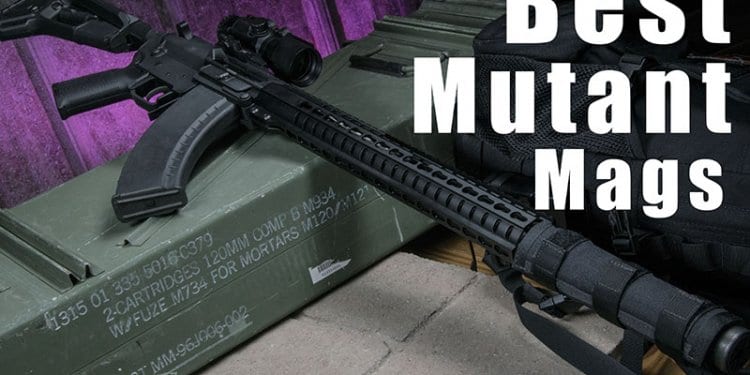 A few years ago I had the chance to review the CMMG Mutant, before anyone else. This rifle is based on an AR-10 and uses the same direct impingement method of operation. It’s chambered in 7.62x39mm, and unlike most ARs in that caliber, it feeds from AK magazines (AK/AKM, to be clear).

The combination of being built on the more robust AR-10/AR308 receiver, and utilizing affordable, reliable common magazines made the Mutant an instant hit. But there’s just one problem. Because the Mutant incorporates the same linear configuration as the AR-15 and AR-10, shooters must carefully choose the right magazine to maximize the heavy carbine’s potential. With that in mind, here are my three favorite AKM magazines for the CMMG Mutant.

A Modern Sporting Rifle with only 10 rounds?!

Indeed, but not because I don’t appreciate having extra rounds in reserve, but simply because the size of standard-capacity AK magazines makes shooting from the prone very difficult. Higher-capacity magazines can be used, but unless firing from a rest or a bipod, the mag itself will hit the ground.

Arsenal’s 5-round (or 10 depending on the follower) magazine barely protrudes 2 inches below the magazine well, and well above the bottom of the pistol grip. This makes it ideal for shooting from the prone, or for reducing the overall profile of the gun.

The only downsides to the magazine are spotty availability and relatively high price. The second I can personally justify simply because I only need one.

The Mutant isn’t a light gun, no AR-10-based platforms really are. Because of this, I try to steer clear of any metal magazines if possible. I don’t like the extra weight, and I’ve banged up my hands more with AK magazines than knives, tools or even working on cars in my entire life.

This Bulgarian magazine in particular is one of the best out there, combining steel reinforcements for extra durability, with lightweight high-impact polymer.  The end result is a high-quality, super-durable polymer magazine that’s next to indestructible. —Plus, it looks great on the Mutant, matching its all-black aesthetics.

Only downside to the magazine, is the size of it, and how its length prevents shooters from getting low when firing from the prone. Plus, it’s cheaper than Magpul’s steel-lined AK PMAGs.

Speaking of Magpul AK PMAGs, their 20-round version is among my favorite AK mags in existence. See, before Magpul started making their PMAGs in 20-round capacity configuration, the only reliable 20-round magazine for the AK (as far as I’m concerned) was the Hungarian tanker mag.

This is a great magazine, but it’s built out of steel, and it’s heavy as hell. Shooters looking to shave a few ounces off their AK, or in this case, Mutant – didn’t have other options save for those from Tapco. Don’t get me wrong, Tapco mags are much better than people think, but I wouldn’t bet my life on them.

These new Magpul mags don’t have the steel reinforcements of the third generation 30-rounders, but their truncated size precludes the necessity of them. Plus, these reduced capacity magazines don’t protrude past the pistol grip, making them great for benchrest or prone shooting, without sacrificing as many rounds as the Arsenal 5-rounder.

Now, every AK mag I tested in the CMMG Mutant, ran completely fine, but these were just my favorites. If you’re stuck with a few steel surplus mags, don’t worry — they’ll serve you well. But if you want to improve the handling of your Mutant substantially, a few polymer magazines like the ones above, are a God-send.