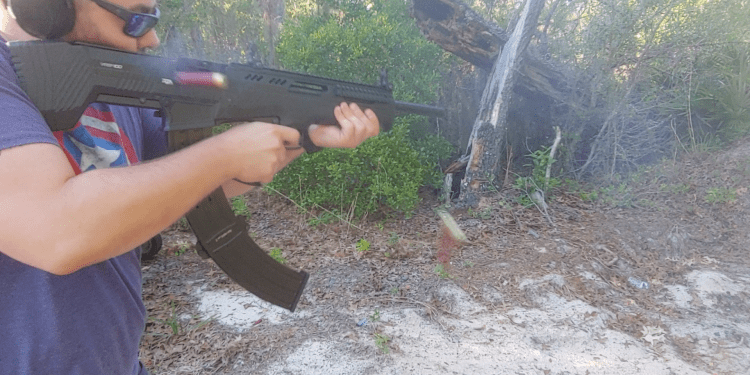 If you’ve followed me at all on this blog, you may have noticed I have a real affinity for shotguns. Load ’em up with mags and they get even better. The Rock Island Armory VR series have been a big favorite for me, and their AR mimicking designs went from big and clunky with the VR 60 to svelte and sexy with the VR 80. In keeping with counting by twenties, Rock Island has released the VRBP 100. The BP stands for bullpup. This is not the first bullpup shotgun, but it could potentially be the most successful.

Shotguns are designed to be close quarters weapons and bullpups are super short and well suited for close range use. The RIA VRBP 100 is as long as an SBS 14 inch Mossberg 590. It’s not an NFS weapon though and has an overall length of 30.91 inches. It’s semi-auto and box fed. It comes with two 5 round magazines, but 9 and 19 round magazines are available. 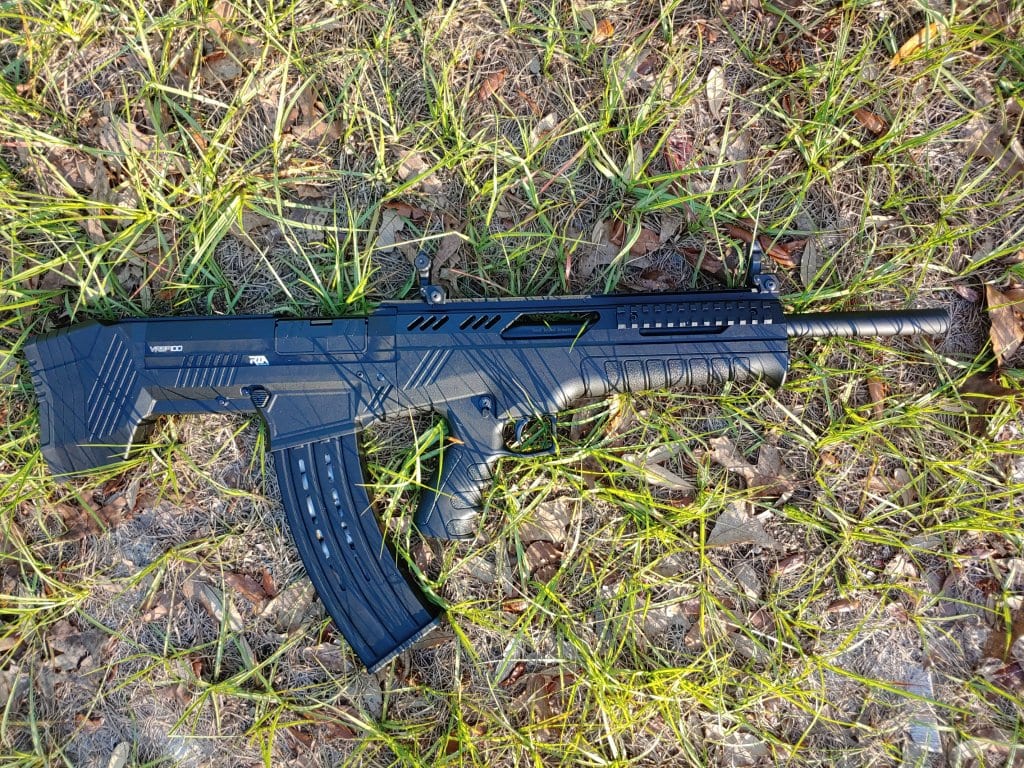 The VRBP 100 is the aforementioned 30.91 inches. The barrel is 20 inches long and the gun weighs 7.72 pounds. This is a gas operated gun and comes with two gas pistons, one for heavy 3 inch loads and one for light 2.75-inch loads. The gun has flip up iron sights and a Picatinny rail across the top and one offset on the right side. It has interchangeable chokes and comes with three chokes and a wrench as well as two 5 round magazines.

The VRBP 100 has some outstanding ergonomics with excellent controls. The compact gun places the controls in such a way that I can easily access them with a little practice. I don’t have to see the controls to reach them intuitively. The magazine release is placed in a manner that you can easily reach it when you grasp the magazine to remove it. The charging handle is non-reciprocating and is perfectly placed to rack the weapon, or to fix malfunctions. 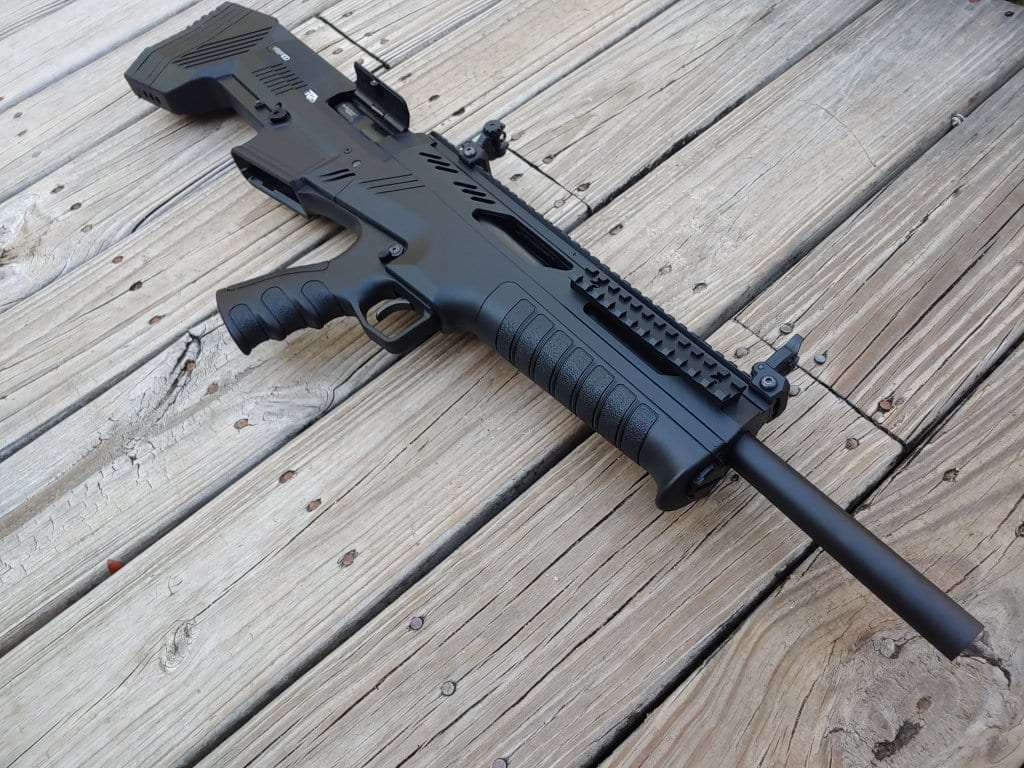 Reporting to the Space Force

The safety is very similar to an AR and has an authoritative click when engaged or placed on fire. It’s easy to reach as well. The gun’s stock comes with an adjustable cheek riser for use with optics. The zero setting is best used for the irons. There are also two QD sling points on the left-hand side only. 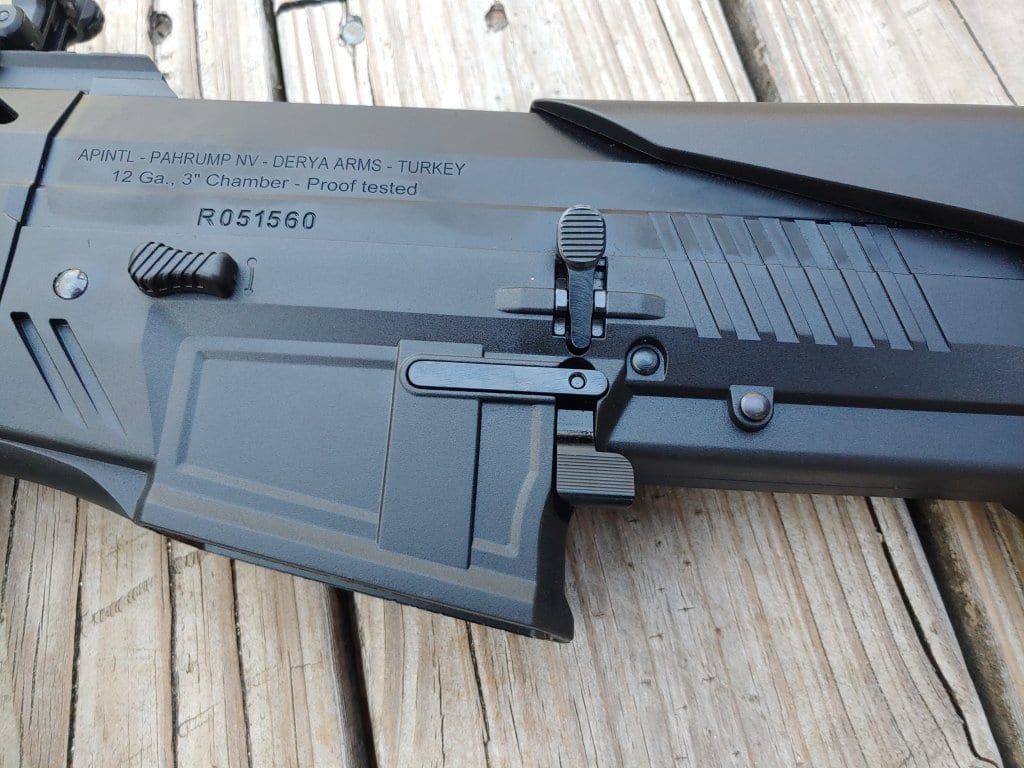 The Controls and Magwell

It does tend to favor right-handed shooters, but it’s not terrible for lefties. The gun has an ambidextrous magazine release and safety and working the charging handle and bolt with the right hand isn’t super hard. The magazine cut off and the bolt release is friendlier for right-handers though. 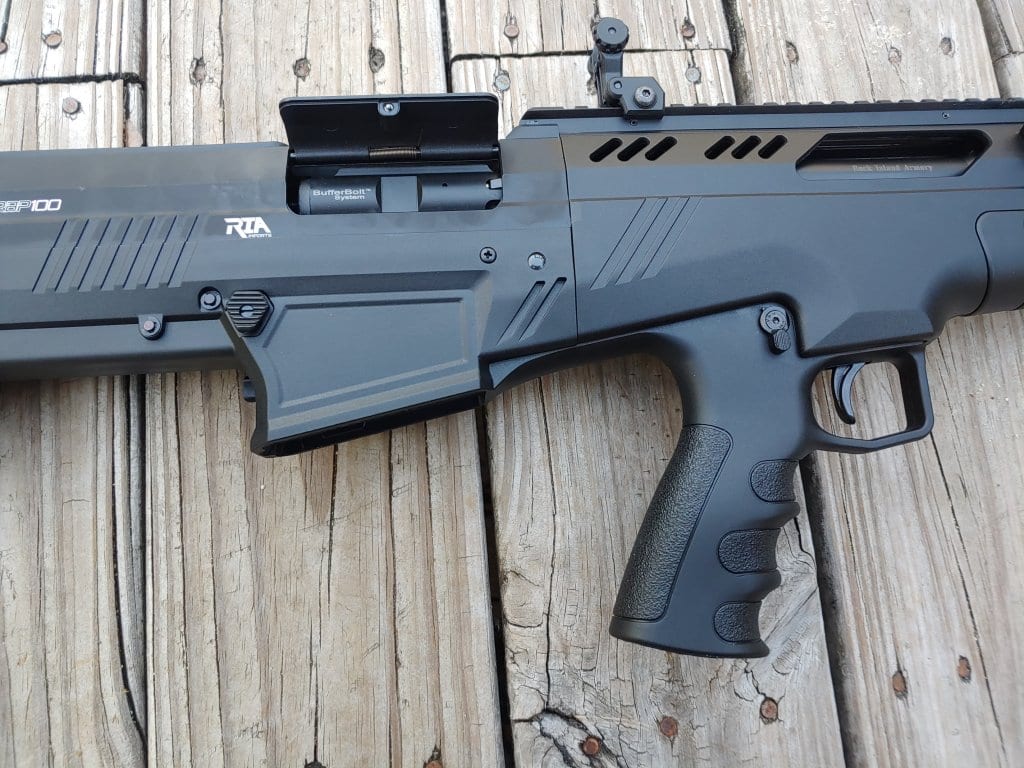 Lastly, the gun has three spacers that can be removed to shorten the length of pull by about 1.5 inches.

I appreciate the fact they went with solid metal magazines. This keeps them together when loaded to the max with big 12 gauge shotgun shells. It makes them a little thinner too, and, in my experience, polymer shotgun magazines are harder to load than metal.

I’ve finally got my hands on a 9 and 19 rounder. Loading the 19 rounder was shockingly easy. The only round that was hard to get in there is the very last. Also, the weapon will load a full magazine with the bolt closed. The 9 and 5 rounder of course load very easily. 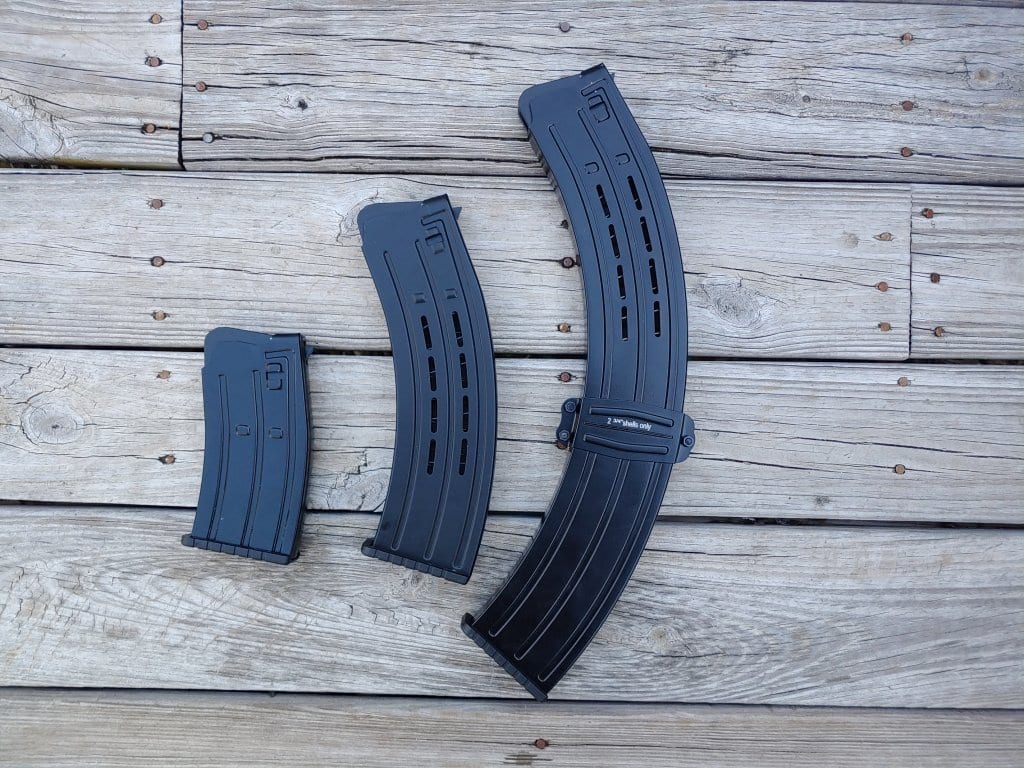 My only dislike with the 9 and 19 round magazines are the mag cuts. This allows you to see their capacity but seems like it opens up the mag to debris which may lead to failure. The mags all run well and have given me zero issues, so maybe the mag cuts aren’t an issue.

There is something about the raw power of a semi-automatic shotgun that just makes it so fun to shoot rapidly. When you toss in 19 round magazines it becomes an absolute blast. I loaded up the two five rounders, the nine rounder, and the 19 rounder and hit the range. The manual advises a 500 round break-in period and the gun needs it. 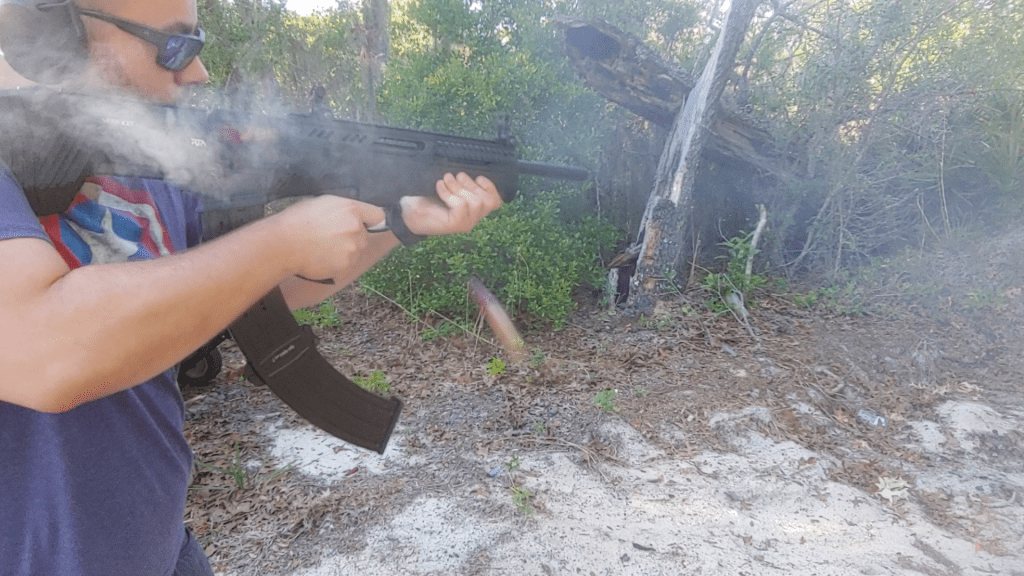 Out of the box I had difficulty with light birdshot. You know the cheap stuff. I had several failures where the fired round would eject but the bolt would not go far enough back to grab the next round. Dumping lube helped a little, but what really helped was full powered shotgun loads. 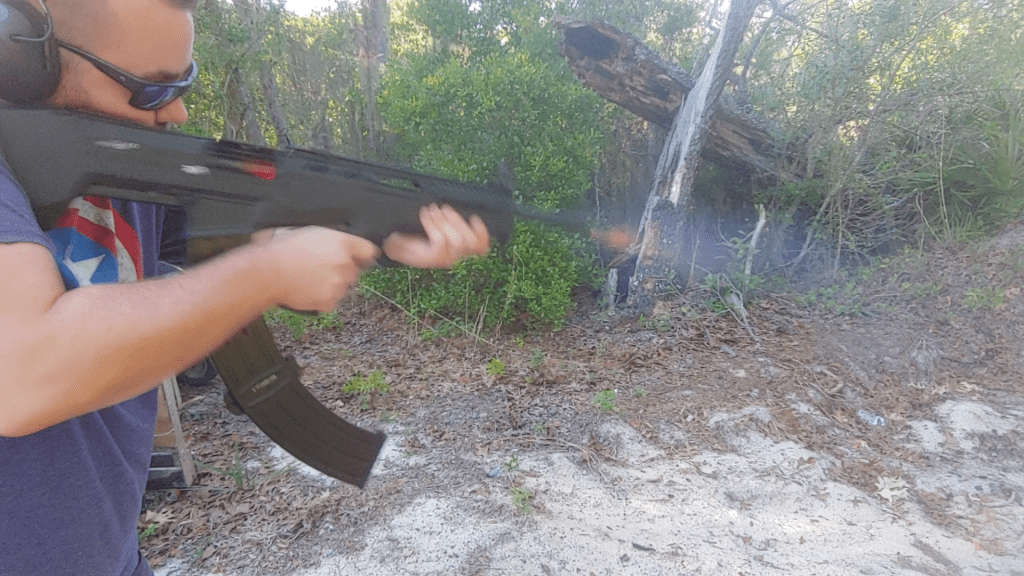 When loaded with Mil-Spec Olin corporation 00 buckshot, the gun ran perfectly. I also used heavy Fioochi sporting birdshot that was 1 1/4 ounce shot at 1300 feet per second. After 250 rounds of the Fioochi ammo and a hundred rounds of buck things loosened up. I could then run el cheapo birdshot.

I’m not a stranger to recoil and I don’t fear it. I love shotguns so I’m used to it. However, holy hell does this thing buck. Muzzle rise is limited but it slams straight back into your shoulder. I wear a nice bruise from my two days of full powered loads.

Going Cyclic with the VRBP 100

Once the VRBP 100 was up and running I was amazed at how fast it cycled. I could dump rounds fast enough that four would be in the air before the first hit the ground. I blazed through 19 round magazines in mere seconds. The adjustable cheek weld is nice, but not needed with the iron sights. I set it on the wide aperture and it was perfect for blazing between targets. I used clay pigeons set on a berm and could cycle through 9 rounds on 9 targets in under 5 seconds from the low ready. 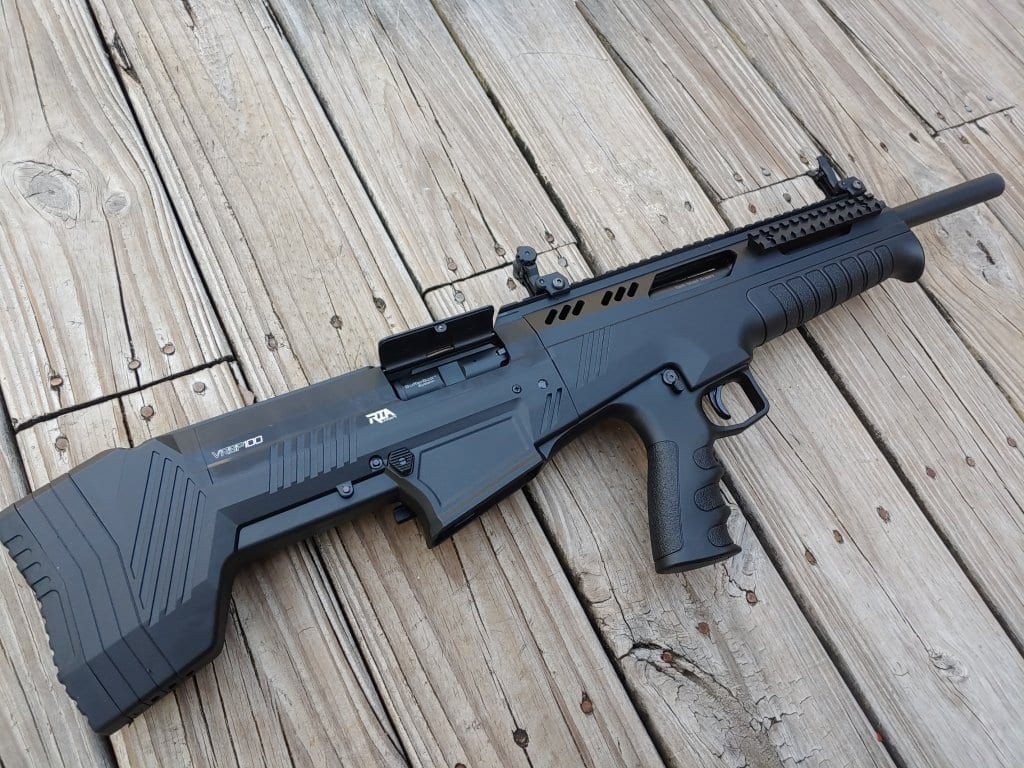 Notice the spacers in the stock installed

The VRBP 100 trigger is heavy, but the pull is short and the reset is mighty. You sure as hell know the trigger is reset and ready. It’s more than a feeling, its a shove. The small and short stature of the gun makes it a natural pointer and it does offer a level of comfort and maneuverability not commonly found on shotguns. After shooting all day my arms weren’t tired from holding the gun up. 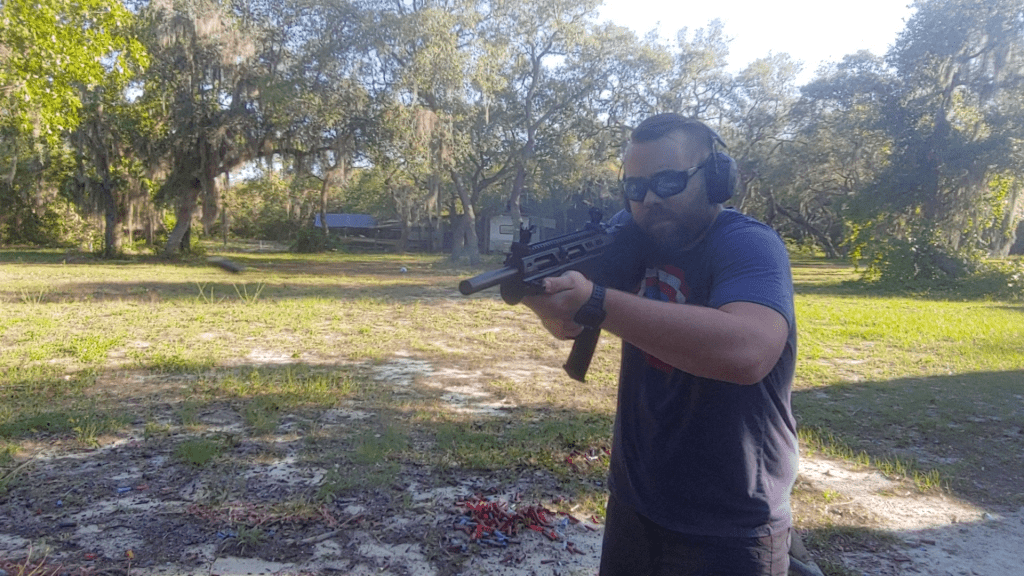 Notice the Pile of Shells in the background

The VRBP 100 balances well and most of the weight is held up by the shoulder. It’s a comfortable gun and with most of the weight in the rear, it’s quick and easy to take snapshots. The 9 round is the most practical, but the 19 rounder didn’t throw things off balance. Snap Shots are a critical component for shotguns and a bullpup just makes it easier. It was very easy to snap up and shoot, and the layout of the gun puts it so the sights are perfectly placed for making those quick snapshots. 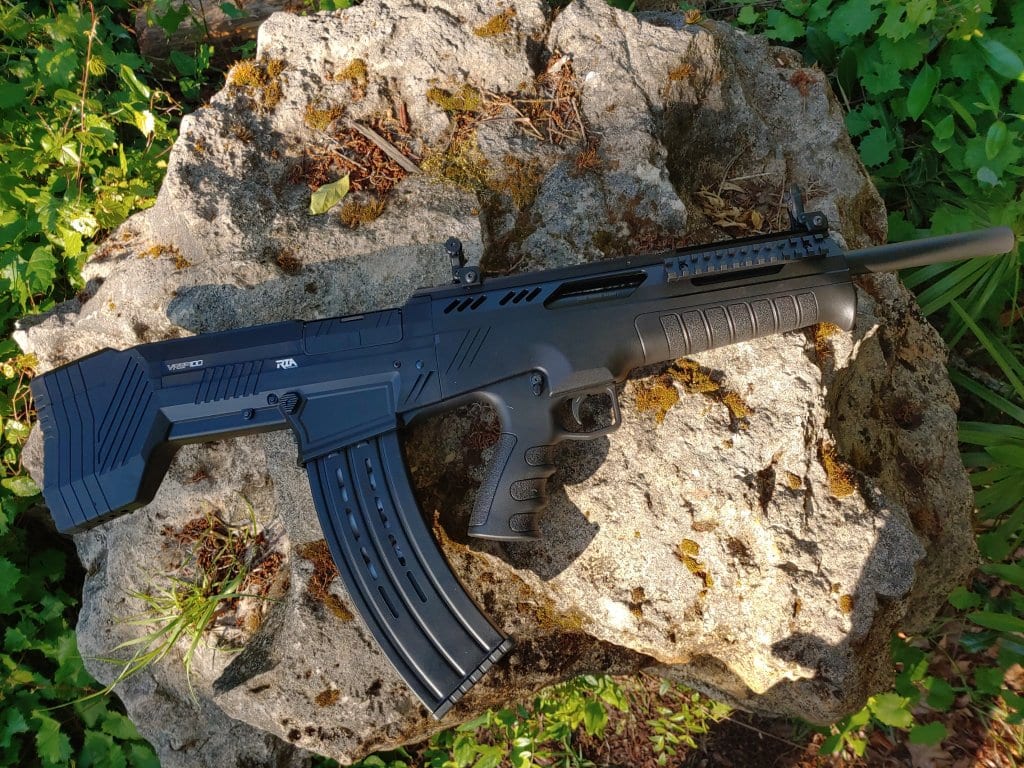 The VRBP 100 is a blast of a shotgun. After a little break in period, the gun ran like an absolute champ. It became extremely fun and easy to dump shotgun rounds. The VRBP 100 is also well designed and well built. It’s the most intuitive of the VR designs and feels like it is of the highest quality. While it’s not for everyone, this interesting mag fed shotgun is surprisingly affordable and at the time of this writing barely started shipping.