I have a special place in my heart for the odd and unusual in the gun world. As much as I love the AK and AR series if you show me something slightly different than normal you’ll have my attention. This eventually lead me lusting after a SIG 556R. The SIG 556R is a civilian variant of the famed 550 series. The 556 series was introduced mostly for the American market due to import restrictions on the 550 series. The 556 series made a few changes to the 550 platform for an American audience, but the SIG 556R is something truly unique. It’s a SIG 550/556 rifle chambered in 7.62×39, and it accepts AK magazines. I searched long and hard for one of these rifles since SIG discontinued them some time ago. I finally landed a used model through some creative horse trading and its one of my more exciting guns. 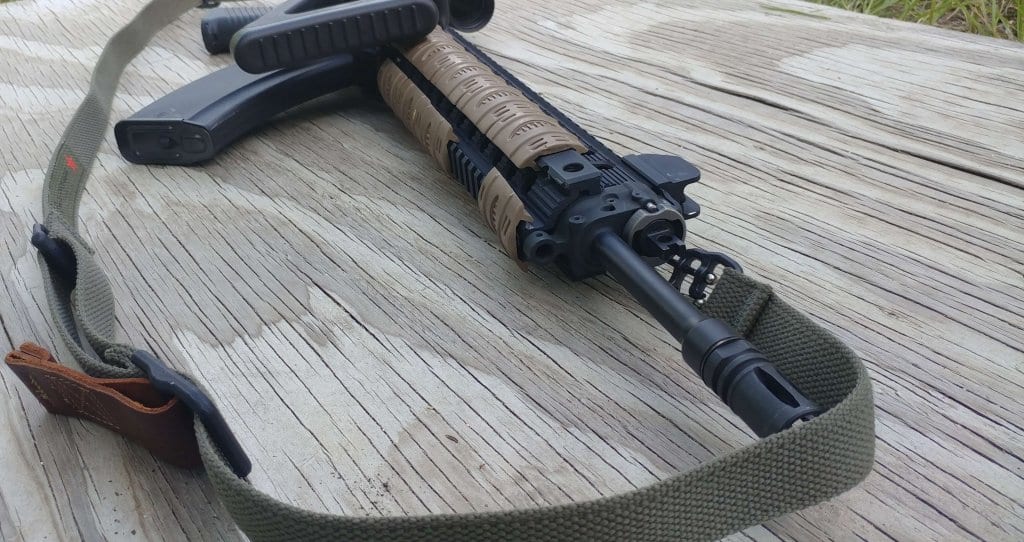 The SIG 556R had some serious teething issues with the first generation. Lots of failures to eject and extract. I have something known as a Gen 1.5 and boy did it have some problems. I was a bit broken-hearted during the honeymoon period of my time with the rifle. However, I wasn’t giving up. I gave SIG customer service a call and for 30 bucks received a UPS label and sent the gun off. I received it back a few weeks later at no additional charge and was happy to take a second honeymoon with my SIG 556R.

The SIG 556R uses a gas piston design with a rotary bolt. The gas piston can be adjusted to two different positions. One for running the gun normally, and the other for a dirty gun or adverse conditions. At 7 pounds the weapon is typically light, but I do have the Troy Battle Rail tacked onto the firearm. This adds roughly another 1.5 to 2 pounds to the rifle. The SIG 556R did not come with sights, so I added my own LPA sights, and eventually added a Browe Tactical Optic to my gun.

The rifle is laid out well, but some of the ergos feel dated. For example, the gun has a right side charging handle with no option for it to change sides. The magazine release is also the standard AK style, which we’d expect with AK magazines. If you have experience with AK platforms, then the SIG 556R will feel familiar.

The ambi safety is so much better than the AK safety though. It’s simple, and I can reach it easily while maintaining a good firing position. I also adore the sizeable rear grip. The SIG’s pistol grip is almost SAW like in size. I loved my SAW grip back in the day, so I welcomed this man-sized SIG grip.

The stock is okay. It’s functional and does provide a solid cheek rest for using optics and sights. The stock folds and can be adjusted for different sized shooters. Folding the stock makes it a short 26-inch package. The adjustable portion comes up short in my opinion. It’s stiff and doesn’t want to move freely. When I tug it with any force, the triangular portion slips off the rest of the stock. It’s quick to fix, but a significant pain in the ass on the range.

Let’s talk about accuracy. This is a gun firing an AK cartridge which isn’t well known for its long-range performance. With your standard cheapo Wolf and Tula, I averaged 2 to 2.5-inch groups at 100 yards with the Browe Tactical Optic. With higher quality ammunition, specifically Winchester brass loads I got solid 1.5 inch groups. I fired for groups in a prone position but did not add any additional support to the rifle. No bipod, no sandbags. Just me and the rifle wishing I had a shorter 10 or 20 round magazine for prone shooting.

It’s not a precision rifle but seems to be much more accurate than any AK I’ve ever fired. The trigger isn’t anything to write home about. It’s a hefty 7 pounds and has a long take up. The take up is smooth though, just heavy and long. It’s very military AK style regarding weight.

Recoil is very mild, and so is muzzle rise. Without a doubt, the rail system adds weight which helps with both. It’s a pleasant shooting gun that’s easy to control over rapid fire strings, as well as well placed double taps and controlled pairs. Running through failure to stop drills was simple, and the rifle points very naturally. There is no last round bolt hold open, so approach it with that in mind. You can lock the bolt open manually though.

It’s an enjoyable gun to shoot and fun to attempt to master. As a former Marine, the AR platform feels like second nature. The SIG platform is entirely new and a challenge I like trying to overcome.

The AK magazine world is vast and broad, and the SIG rifle is a bit different. I was concerned about magazine compatibility myself. I own a variety of AK mags that include magazines from Romania, China, Korea, Bulgaria, Yugoslavia, and of course the good ole’ US of A. All of my foreign made magazines are metal, and they all fit the SIG 556R. The Yugo Zastava’s bolt hold open does work with the SIG rifle, but–like the AK–the bolt will go forward when the magazine is removed.

My polymer Tapco and Magpul also fit perfectly. They do fit a bit tighter than your average magazine, but they fit. I run mostly Magpul mags because they are cheap, plentiful, and reliable. I’ve no issues caused by different AK mags in the 556R.

Last Thoughts and Parting Shots on the SIG 556R

Is the SIG 556R a good rifle? Sure, after SIG fixed it, it became a good rifle. Is it a great rifle? No, objectively it is not a fantastic rifle. It has some dated ergonomics, it’s not the most accurate rifle, and the trigger isn’t slick and sexy. I still find myself loving this gun. It may be because its unique, but still uses popular magazines and affordable ammo. I certainly don’t have an objective reason to love this gun, but I do. I guess the heart wants what it wants.

SIG seems to have moved well away from the 556 series in general. The 556 and later 556 Xi series is discontinued and scrubbed from SIG’s website. If you are looking for one now, the used market seems to be the only place to find one. If you do find one, I’d suggest test firing it, or ensuring its a gen 2. There are a few tips and tricks spread across the interwebs to confirm its a Generation 2 rifle. Check them out.