I have to be completely honest: I enjoy shooting the AR-15, but few new AR rifles excite me. Sure, there are neat additions to the AR world every year, but most are just minor upgrades or changes.

This year at the SHOT Show, there was one new series of AR-style rifles that did impress me: the Troy SOCC line. SOCC stands for Special Operations Compatible Carbine. It is no surprise, then, that the company began the development of these guns by talking to members of the US military’s special operations community.

With feedback from some of the military’s best shooters, the company set out to make a better AR. The result was the SOCC line of guns. All of these guns are chambered in 5.56 NATO. The full-size SOCC gun is the Carbine. Besides the Carbine model, the company is also making PDW and CQB versions of the gun. Both of these are NFA items.

The SOCC Carbine uses a 14.5″ barrel with a pinned and welded Troy three-prong flash suppressor. Permanently attached, the flash suppressor has an integral sound suppressor mount. The Carbine is a non-NFA gun, meaning it will be available to most US citizens. Local laws may affect availability. 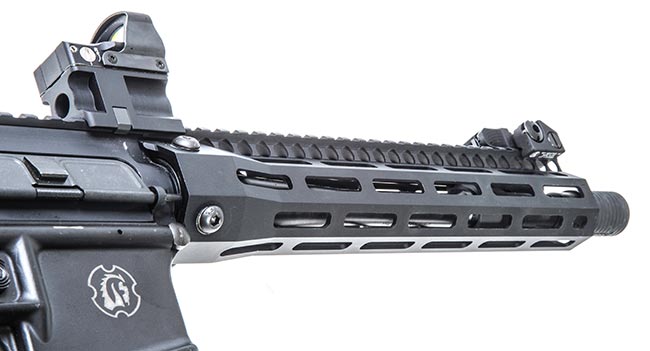 Surrounding the barrel is a SOCC BattleRail handguard that is sculpted inward toward the barrel. This makes the handguard feel very thin in the support hand. It felt great to me. The BattleRail has M-LOK attachment points for adding accessories without the needless weight of a Picatinny rail system.

On back, Troy uses a SOCC Airborne stock. The Airborne is similar to the company’s existing Tomahawk stock, but with a few changes. The guide rails are user configured in one of two ways. The first allows for the stock to have multiple adjustment positions. The second configuration allows the stock two lengths: fully open and completely collapsed.

The Airborne also has a 2″ longer length of pull when extended. With the barrel, this gives the rifle an overall length of 30.5″ – 34.5″.

Like the Tomahawk stock, the Airborne has an integrated cheek piece that I find superior to the guide rail only style used by other companies.

On these rifles, Troy changed the safety selector to include a 45? down bend to it. This small alteration improved my ability to operate it. Since the switch is ambidextrous, I was able to take it off of safe with my shooting hand thumb and then quickly place the gun back on safe with my trigger finger.

Yes, I can perform the same functions with my thumb only. However, I found that being able to use both thumb and finger on opposite sides of the rifle made the process much quicker.

Troy did not skimp on the fire control group. Included as standard is the Geissele G2S trigger. The G2S trigger is a two-stage trigger with a total pull weight of 4.5 pounds. It is not adjustable and is similar to the highly regarded Geissele SSA trigger

For these guns, Troy developed an ambidextrous SOCC charging handle. These are included as standard for all of the guns in the SOCC line.

Rounding out this gun is a set of SOCC folding sights. These sights are designed to be durable while maintaining an ultra-low profile when folded.

The CQB has a 10.5″ barrel with an unwelded three-prong flash hider. Up front, a new SOCC MK18 BattleRail is used that matches the length of the barrel. It uses M-LOK attachment points.

The Geissele G2S trigger and the SOCC ambidextrous charging handle are also used in this gun. The CQB comes with a Troy 30-round BattleMag.

For the smallest possible package, the PDW is the way to go in the SOCC line. This gun has a barrel length of 7.5″, which is sure to make for spectacular fireballs when shooting normal 5.56 NATO ammo at night.

Troy equipped the PDW with its Tomahawk Short Stock. When the stock is collapsed, the gun is a mere 21″ in length. Fully extended, the gun is still less than 26″ in total length. The gun can fire from the collapsed position.

The short length makes this gun a candidate for any use where space is at a premium. Obvious uses for this gun would include personal protection details and for anyone working in and around vehicles.

As with the other guns in this line, the PDW is equipped with a new SOCC handguard that has M-LOK attachment points. Instead of the three-prong muzzle device used in the other guns, the PDW uses the Troy Claymore muzzle brake.

As with the other guns, the PDW is fitted with low profile sights, an ambidextrous charging handle, and the SOCC ambidextrous safety selector.

All of the guns in this line carry the same suggested retail price: $1,599. Checking the sample guns in the Troy booth, I was pleased with the quality of the builds. Everything seemed tight and built right. I mentioned previously that I like the new ambi safety selector. I also really like the Airborne stock used on the Carbine model. Outfit it with a Trijicon MRO or similar optic, and I would have a nearly perfect gun.

Unlike the approach Troy has taken in the past, all of the SOCC parts will be available for sale to the public. That means you will be able to equip your currently owned rifle with a SOCC BattleRail, safety selector, or Airborne stock.