Trijicon RMR is, without a doubt, king of the mini red dot market. They are the most proven red dot on the market and the choice of many armed professionals. They’ve been challenged by the likes of Leupold and Meopta for the professional market, and companies like Burris, Vortex, and Swampfox have produced quality, budget-friendly optics that fulfill hobby-related roles. Then, out of nowhere, a company called Holosun exploded onto the market. The company started small, but somehow, someway ended up producing the Holosun 507C, a mini red dot that’s challenged Trijicon.

Challenged them so much, so Trijicon has filed suit against them. I’m not a patent lawyer, and I don’t pretend to be one on TV either. However, it’s not like Chinese companies have a long history of respecting intellectual property. I recognize why one would not want to buy optics that support an oppressive regime. However, to give an objective review of the 507C, I put my personal thoughts aside.

The Holosun 507C in Living Color

The optic is unique among mini red dots in the fact that it comes with three different reticles. The reticles include 2 MOA red dot, a 32 MOA circle, and a combination of a 32 MOA circle with a dot. It’s an interesting setup, that does make the optic handy for things outside of pistol, and has excellent results for those with astigmatism. Swapping reticles is very easy, and all the user needs to do is press the down setting button, and the optic will switch reticles. 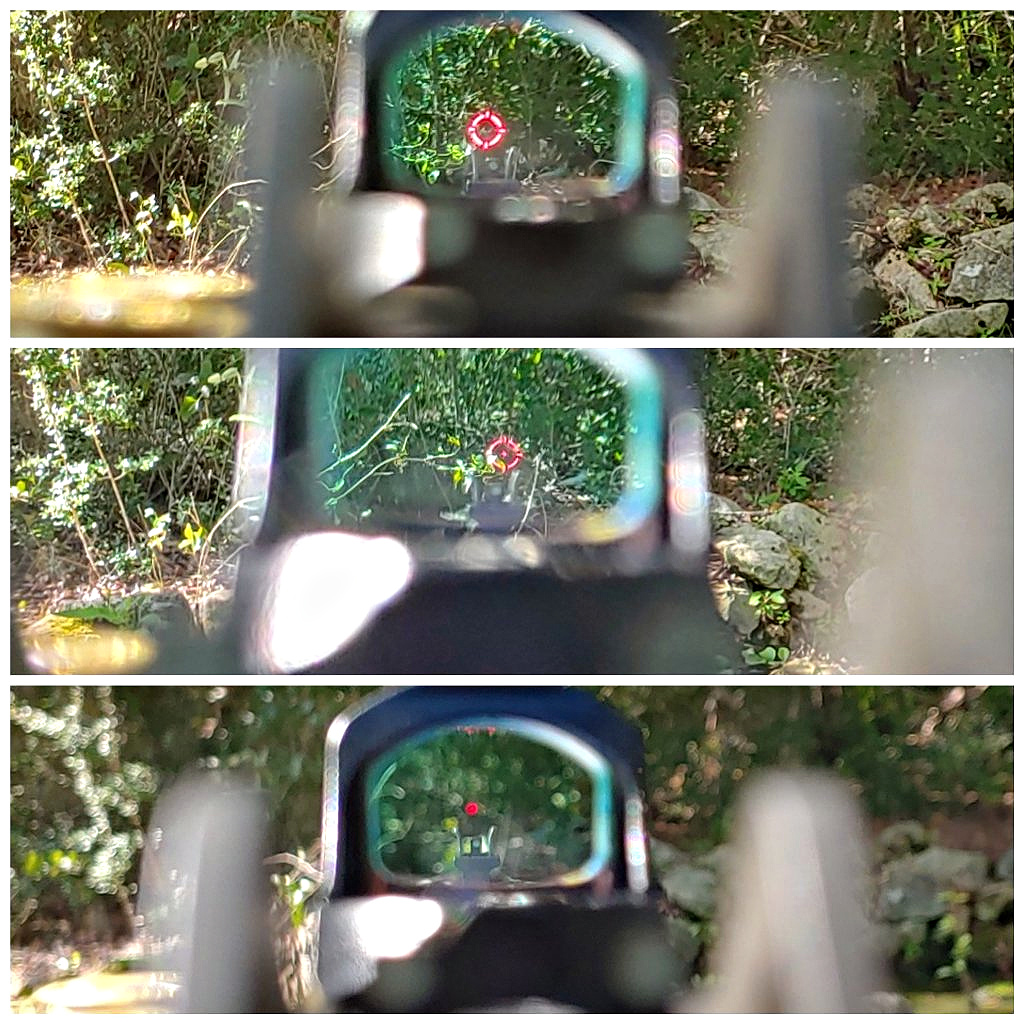 The 507C has a dual fuel design with a solar panel on the top of the optic and a CR1632 battery. The optic will run for 50,000 hours via battery on the 2 MOA dot setting. The larger reticles will eat up the battery a good bit faster at 10,000 hours. One of the most compelling parts of the V2 design is the battery tray. It slides out of the side and does not require you to remove the optic to swap batteries.

The 507C has ten daylight settings and 2-night vision settings. The side-mounted buttons make it easy to change brightness levels, or you can use the reactive automatic mode to set the brightness level. The frame is made from 7075 T6 aluminum, and the optic has an anodized finish.

I’m not running this on a handgun like many but on a Benelli M4 shotgun. I’m using a Scalarworks Sync mount that is absolutely fantastic, by the way. The Sync mount allows for a low profile mount that co-witnesses with the M4’s stock sights. I wanted a mini red dot on the gun, and the Holosun lined up with the sync mount, so it seemed like a natural fit. Twelve gauge shotguns aren’t gentle weapons either, so I assumed it would be an excellent platform for durability testing on a long gun.

What initially appealed to me and drew me to making this a shotgun optic is the 32 MOA circle reticle. I’ve had this idea that I could use a circular reticle to pattern buckshot inside of at specific distances. The reticle would allow me to ensure I have complete pellet accountability. My load of choice is Federal Flitecontrol, eight pellet buckshot.

I won’t dive too deep into the experiment, but I will say it worked. With my load of buckshot, I found the circle reticle allowed me to know for sure that every pellet stayed inside that 32 MOA circle at 15 yards, which is beyond the longest shot inside my home. 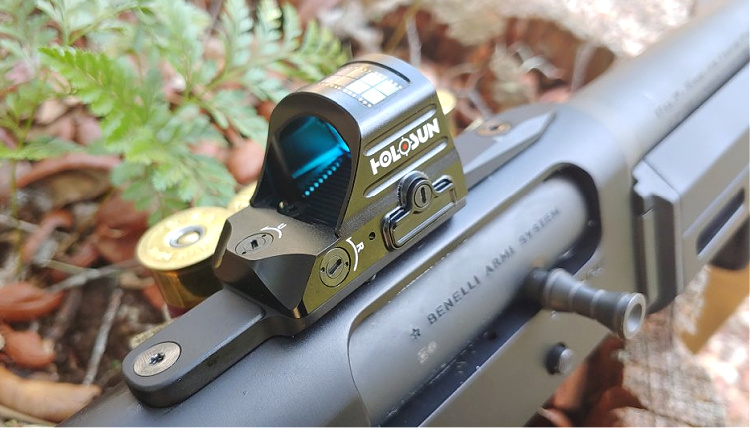 The multi reticle design is appealing and gives you something beyond a dot to aim with. As you can imagine, the larger reticle is easier to see and pick up with speed. As someone who has minor astigmatism, the bigger reticle is clearer and more comfortable for me to see.

I’ve tossed down a good bit of buckshot and birdshot through my Benelli this spring and summer since ammo for rifles and handguns is practically nonexistent. I initially mounted the optic to the included Benelli rail before receiving the Sync mount.

Zeroing is easy as expected, and zeroing a shotgun with the Holosun 507C V2 is even easier than most optics. The fun part was seeing if it held zero throughout a variety of buckshot loads. From the soft-shooting reduced recoil Flitecontrol to the powerful Hornady Black, I put a good amount of different loads through the gun and the optic.

The majority of the hard-hitting stuff was some el-cheapo Rio buckshot loads I bought for a song. I bought in bulk and had plenty of lead to chunk downrange, and a semi-auto shotgun makes it a rather easy endeavor. After a little over 200 rounds of various buckshot and Lord knows how much birdshot, I rechecked the zero using my initial Flitecontrol load and it was dead on.

There never a flicker of failure as the gun recoiled. This seems to indicate the battery contacts are tight and maintain a solid connection to the battery.

Along the way, I enjoyed how the small nature of the optic made port loads a mostly uninterrupted process when going over the top. I prefer an over the top port load for semi-auto shotguns so I can load the chamber and press the bolt release in one motion.

The Controls and Brightness Levels

I live in the swampy, hot, and bright state of Florida. Outside of the world’s worst superhero and best meth, we are known for how punishingly bright it can be. This puts the brightness levels of most optics to the test. At high noon the 507C was perfectly suitable at its 8th daylight brightness level. 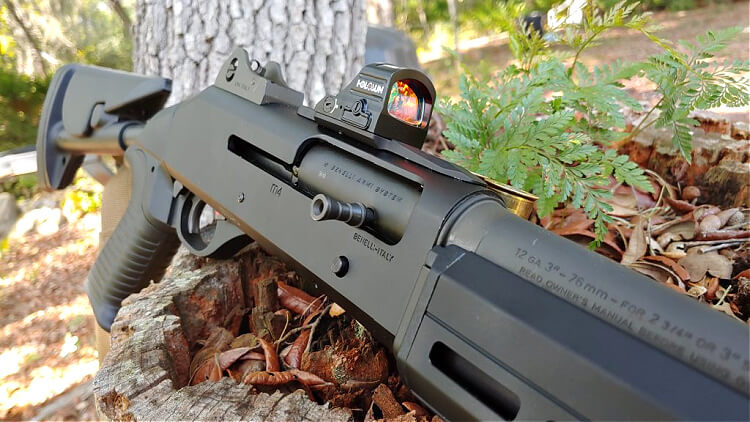 I’m not a fan of automatic modes on serious guns. With the 507C, my attached weapon light washes the reticle out, and the light does not adjust to the light forward of the optic. In low light scenarios, the automatic mode will dim the reticle, making it impossible to see when you turn the WML on. Through experimentation, I found the 5th setting to be the best compromise for indoor use for and night scenarios with and without using a WML.

Another downside of automatic modes is when aiming from a dark area in a bright one, and vice versa. Switching between modes is simple and requires you to hold the + for four seconds until the reticle blinks. That is all there is to it.

Politics aside, the Holosun 507C V2 is a very well made optic with a lot of potential to it. The side-loading battery, multiple reticle options, and dual fuel design make it quite appealing. It seems to be robust in my experience, but Chamber’s Customs has put 37,000 rounds through one, Aaron Cowan at Sage Dynamics has also abused the hell out of one, and John Lovell has also given it a big thumbs up.

It seems like the 507C is here to stay unless Trijicon wins the lawsuit — then who knows what will happen.