A couple of weeks back I was reading an article about the subversive nature of the protagonists in the 1987 Action/Sci-fi/Horror film, Predator. By today’s standards, where a flawed hero is seemingly required, Predator offers nothing of note. Interestingly, on initial release, the  Predator film didn’t fare too well. That’s likely because audiences and critics were getting sick of the same old bullshit: great hair (Top Gun), giant pecs (Commando), and infallibility (Rambo: First Blood Part 2). And maybe over-the-top lines like “You’re a disease, I’m the cure” (Cobra), “I have come here to chew bubble gum and kick ass… and I’m all out of bubble gum” (They Live), and “If it bleeds, we can kill it” (Predator 1987).

Given Predator’s glistening pipes and Rockstar cast, it’s easy to write the film off as, yeah, more of the same.

Ineffectual Pipes and MP5s (and a new way forward)

In the intervening years, however, perceptions about the film have changed, as writers and critics have come around to seeing Predator as almost a liminal movie: where we start to see a shift in the values of the action genre. A case in point is the lead protagonist Dutch, played by Arnold Schwarzenegger. His biceps are as sweaty and bulging as in Raw Deal and Commando, but by this film’s final act, Dutch is reduced to a sort of primal existence, with all his plans having gone awry and almost all of his bravado removed.

A similar point can be made for Jesse Ventura’s character, Blain. Remember, this was the late 80s and Ventura had huge capital (that would help him later become governor of Minnesota). To have him waxed in grand fashion early on said something about fallibility, vulnerability, and a shift in agenda. Basically, anyone in this film was now fair game for an early exit, even if the actor was a former pro-wrestling star and (maybe or maybe not) a former Navy SEAL. (Joss Whedon used a similar device in killing off the so charming Wash in Serenity).

While it may be an over-done point, the excess and uselessness of all that muscle and all that hardware certainly had to be a commentary on the decade in which the film was brought to screen. Okay, I can feel you get a little twitchy. C’mon dude, that’s sorta interesting, but what about the guns guns guns?

How about we consider Heckler and Kochs for a wee while then? It’s reasonable to say that 1987/88 were the years that H&Ks were introduced to mainstream movie audiences. Predator is notable for the prolific use of MP5s, and if you look at two other important films of that short period, Die Hard and Lethal Weapon (both these films have flawed or anti-heroes, too), well it’s a goddam H&K (Heckler & Koch) coming-out ball. MP5s feature prominently in all three films. Die Hard sees Hans Gruber (greatest villain ever) caressing his P7M13, while Lethal Weapon has Martin Riggs using a PSG-1 to drop a few well-tailored mercs in the California desert.

Previously to these films, SMGs were often represented by either Uzis, Mac-10s, or Sterlings. Uzis though, they were so 70s, the Mac-10 was sort of the street trash SMG and the Sterlings just reeked of working-class values… all that stamped metal!. But going forward, the SMG game got classed up thanks to the Germans and their well-turned-out offerings.

I mean, who wouldn’t want to bring one to a party where half the bad guys are wearing suits with padded shoulders? 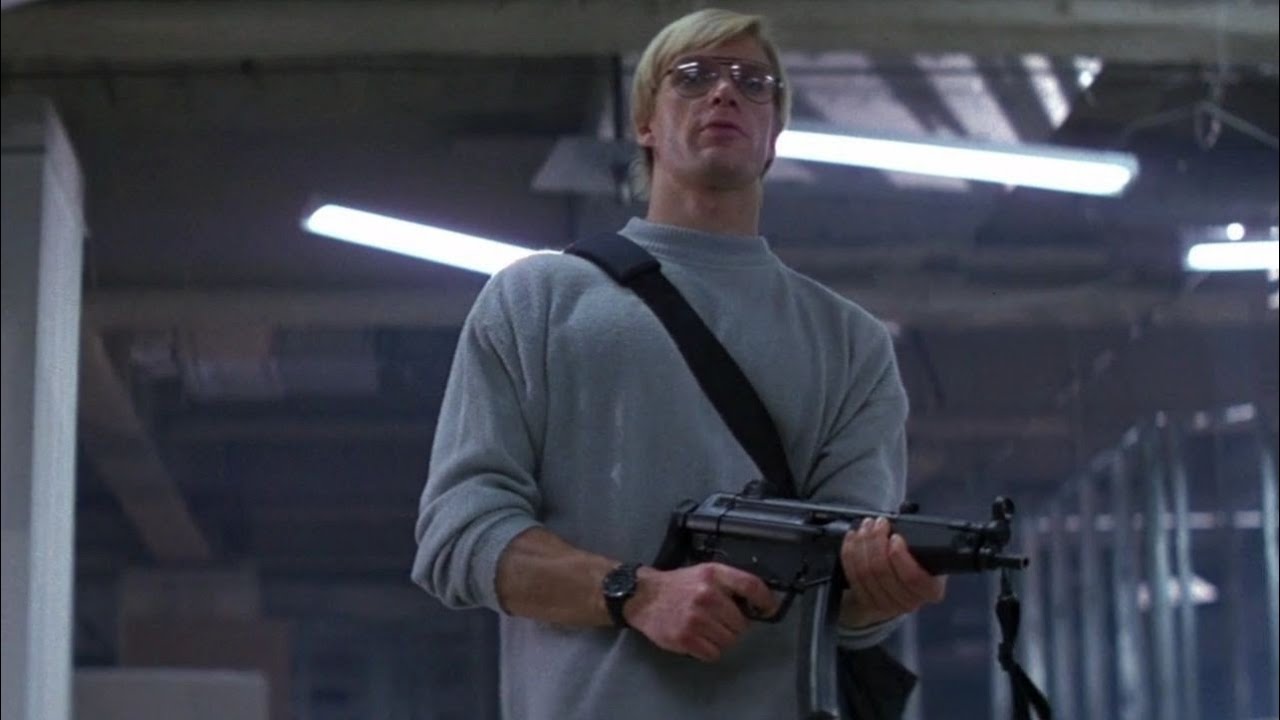 I love me an H&K, but there are some serious issues with the use of MP5s in Predator. Good for an office tower robbery: Sure thing. For Close Protection use? Check. The heavy canopy rainforests of Central American? FFS.

Before we talk briefly about foliage and 9MMs, I would like to mention Michael Papac. He was the armourer on all three films: Predator, Die Hard, and Lethal Weapon. I’ll chalk it up to Papac thinking that H&Ks were sexy and bad-ass and to hell with whether they were in any way practical.

It ain’t all MP5s in Predator though: Dutch and the indigenous American scout, Billy, have M16s w/under-the-barrel attachments (an M203 grenade launcher for the former and a 12GA Mossberg shotgun for the latter). 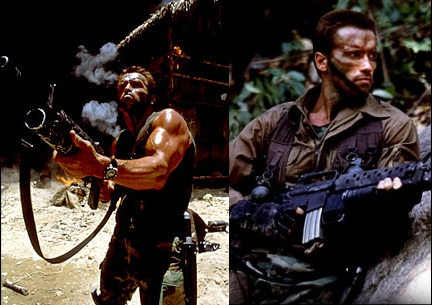 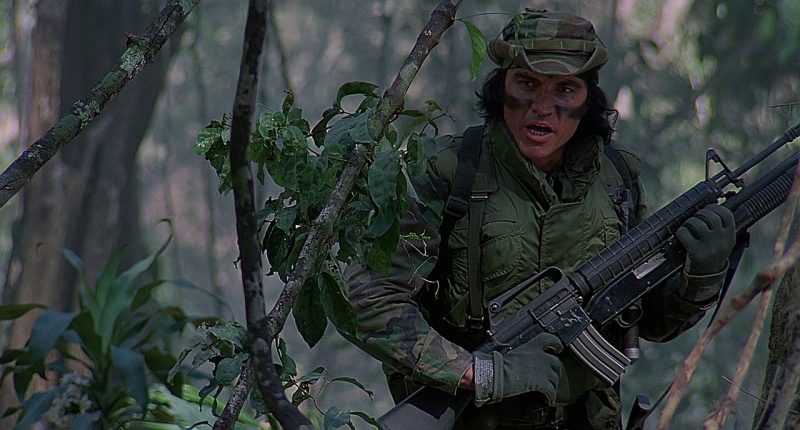 But I’ll be fucked to know why this professional rescue team thought that 9MM SMGs were the way to go in mountainous terrain with giant trees and heavy foliage. 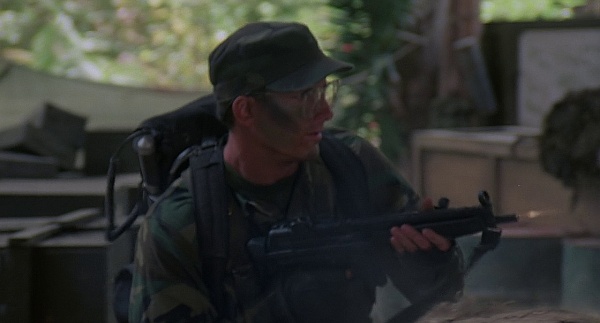 Whatever. I can forgive the flawed logic when it’s done from a place of love, or lust. And their chosen armament did manage to leave us one of the most enduring movie quotes ever (and a musical, too).

If It Bleeds We Can Kill It

Predator is ridiculous, and I say that with both love and lust. But it also has some great larger-than-life characters in Dutch and Blain. It also includes a great, low-key turn by Bill Duke as Mac (who many years later was a scene-stealer in The Limey).

And while Billy the scout may be a cliché whose time has passed, at least the film chose an indigenous American actor in Sonny Landham. And his standoff against The Predator with only a machete — ridiculous but most excellent.

All in all, Predator is a beast of its time that also offers a glimpse out of the 80s and into the more pragmatic and human action films that we are now graced with.

Plus, yeah, MP5s and Old Painless! 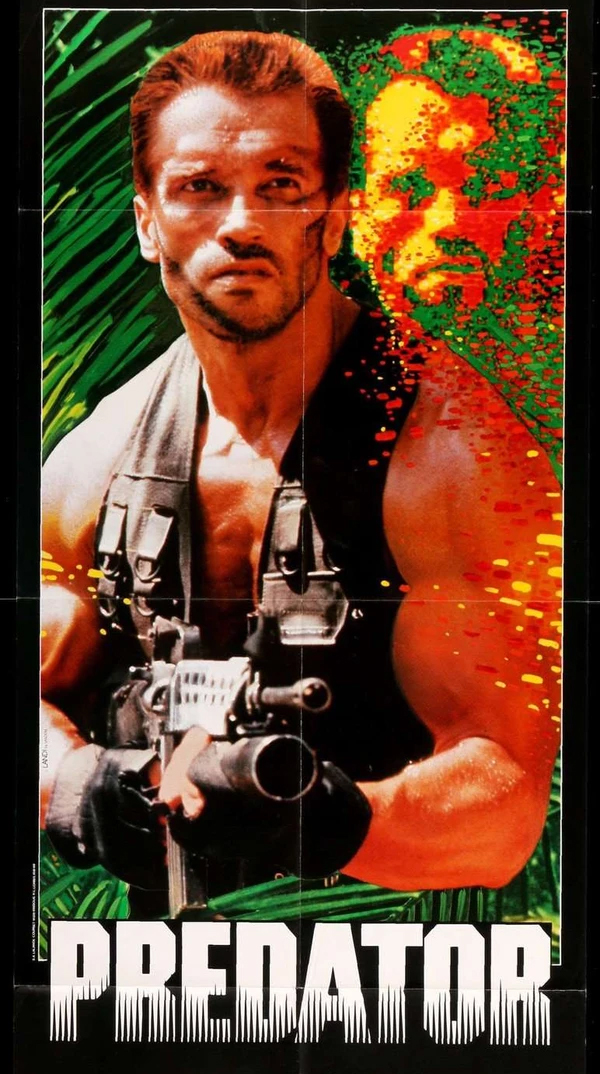 If you’re a fan of Predator 1987 (and you have a sense of humor), you may appreciate this.

Sing along: “If it bleeds we can kill it!”

Music and lyrics of If it bleeds we can kill it “Predator Musical” by Jon Kaplan and Al Kaplan (Conan the Barbarian: The Musical, Silence! The Musical)

Scott Waters
Scott Waters escaped the North of England as a child and has lived in the occasionally frozen/occasionally fecund land of Canada since then. An epigrammatically jocose former Canadian Infantry soldier who got himself some "higher education", he became an artist and writer. These days he does some work with aid groups, dips his toes in the Army while continuing to dip his toes in art and writing. There is a general "toe-dipping" theme.

The Batman — Saturday Night At the Movies

The Contractor | Saturday Night at the Movies

The Highwaymen: Telling it Straight on Bonnie and Clyde

Army of the Dead — A Bloated Zombie Mess