Leading up to the 2015 NRA Annual Meetings & Exhibits, one of the most frequent questions I heard in the gun industry was “When will Glock release a single stack 9mm pistol?” It was at that show that the folks from Smyrna, Georgia arrived with a slim pistol dubbed the Glock 43.

If the local gun shops near me are any indication, the compact gun is a genuine hit. No one seems to be able to keep them in stock.

I had an opportunity to shoot one of the first G43 pistols before the NRA show and was fortunate enough to pick one up shortly thereafter. I shot and carried it for several months before giving it a thumbs up. Now that I’ve had it for more than a year, I thought it might be good to re-visit the pistol and let you know how it has fared. 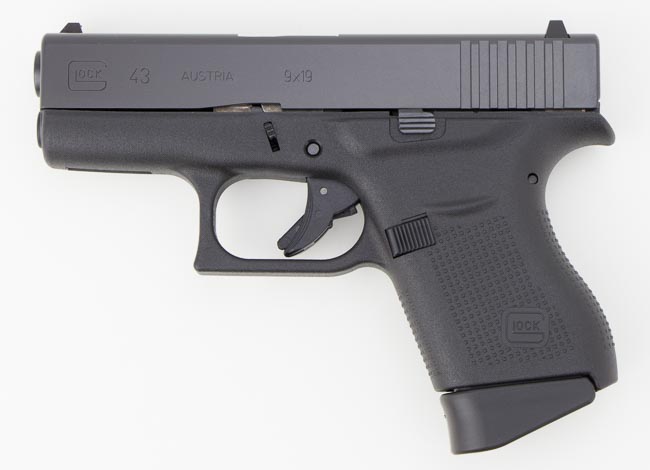 When I first shot the G43, I was not impressed. The gun simply didn’t “speak to me” like other guns do when you pick them up. My initial shooting with the gun was also lackluster.

Fortunately for me, I didn’t stick with my first impression and wanted a second look at the gun. I’m glad I decided to give the gun another go as it quickly became one of my favorite compact pistols.

Glock sent me a review gun for testing and I really put the gun through the wringer on the range. With all kinds of ammunition, the gun was both reliable and accurate. Frankly, I still don’t know why I didn’t like the gun at my first introduction to it.

I wound up really liking the diminutive pistol and started carrying it for self-defense. I’ve also recommended it to others for the same purpose.

But now, I’ve had the gun for nearly 18 months. What are my current feelings toward this pistol?

A Year of Shooting the Glock 43

During my initial testing of the gun, I ran a dozen different self-defense and practice loads through the G43. All performed 100%. 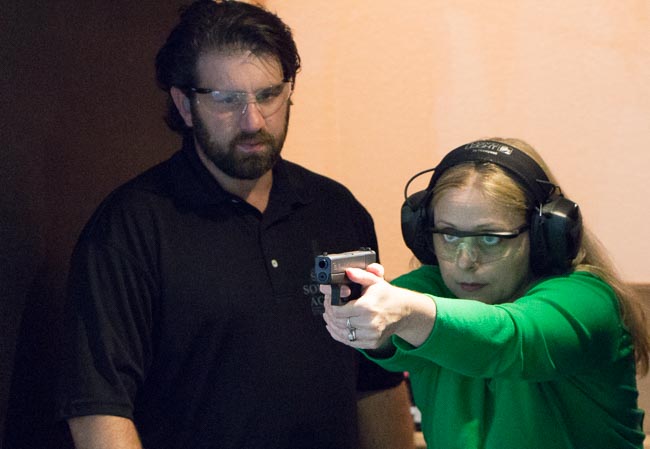 Since then, I have shot many more rounds through this gun. While quite a bit of the ammo has been 115 and 124 grain FMJ loads (Blazer, Federal, and Sig Sauer mostly), I have also shot quite a few new personal protection loads through the gun.

So far, I’ve not had a single malfunction with this gun. Everything just shoots. This includes my preferred carry load, the Federal HST 124 gr +P. Out of this gun, the load has been extremely accurate.

A Year of Carrying

The durability of Glock pistols is near legendary. I’ve seen a lot of abused guns in my career as a police officer, and the Glock products always seemed to resist corrosion and outright negligent care very well.

I’ve been gratified to see that the G43 has weathered regular use well. Carried inside the waistband with the slide exposed to my skin, the pistol seems no worse for the wear. I’ve been using the Blackhawk A.R.C. holster quite a bit, and this rig has not left any visible marks on the gun.

I have also tested a number of other holsters with this pistol including a Yeti-Tac IWB and several rigs from Dara Holsters. Be sure to check out my Glock 43 holster list for a complete rundown of everything I’ve tried and recommend.

I’ve found the pistol to be a bit big for pocket carry. However, for IWB, I like the gun a lot. I tend to carry on the strong side, just behind the hip. The gun virtually disappears in this position.

In the appendix position, the gun also carries nicely. This is not my favorite position, but it works for a lot of people and there are a number of nice carry rigs that make this a great concealment location.

While I am not a fan of ankle carry for most circumstances, it does have its place. The good news is the G43 works very well in this location. I always found the double-stack G26 to be a bit thick here. The G43 is thin enough to be the perfect size on the ankle.

Out of the box, the Glock 43 is ready to go. If you plan on carrying it for self-defense, there are a number of things to think about adding to the mix. Obviously, a holster is important.

I strongly encourage people to pick up at least two additional magazines for this pistol. Glock ships a pair of them with the gun: one for the gun and a second to carry as a spare. However, if you train with and carry the same magazines, you are putting a lot of wear on what is arguably the most likely point of failure in the gun.

Extra Glock 43 magazines are cheap and you can afford at least two of them. Once you buy them, mark the ones you will use for training, and don’t worry when they hit the floor.

Weapon lights are available for this pistol from both Streamlight and Crimson Trace. I’ve tried both, and both work well. However, I found the Crimson Trace unit was brighter, easier to operate and it seemed to be constructed better.

I think the G43 is a fine weapon for self-defense. Like any compact pistol, it has its limitations, but within those, it does exceptionally well. It is reliable, accurate, and an easy shooter. I carry it almost daily and expect that I will regularly carry it in the future.

Is it the best single stack 9mm pistol on the market? That’s tough to say. There are several good choices out there, and I do like it better than the offerings from Kahr and several others. The XD-S from Springfield Armory is a strong contender, though I’m not a fan of the grip safety. Likewise, the Smith & Wesson Shield is a solid choice.

The strongest competition to the Glock 43 for me is the Walther PPS M2. Both guns share many general characteristics, but I’ve found the Walther fits my hand better which leads to slightly better accuracy, better recoil control, and faster shooting. My wife put her Shield away and now carries the Walther, and I may do the same in the future. For now, I’m content with the Glock 43 and I would never try to talk anyone out of choosing it for their own defensive needs.