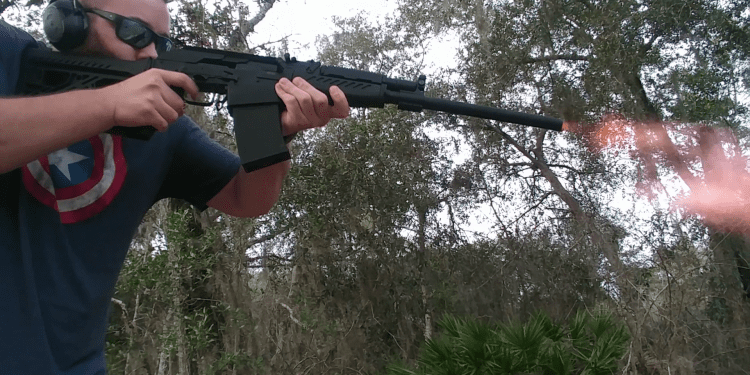 The old Saiga 12 gauges were a big hit with a variety of people. It was a magazine fed shotgun that with some work would run true. The problem is sanctions with Russia dried the supply up and that left a big gap in the AK shotgun market. Companies big and small have stepped up and stepped in to replace the fallen king. Some from China, some from the States, but today’s model comes from Turkey. I don’t know much about rifles and handguns from the Turks but the Turkish seem to make a pretty good shotgun. I was excited when Legacy Sports offered to send the new Citadel RSS1. 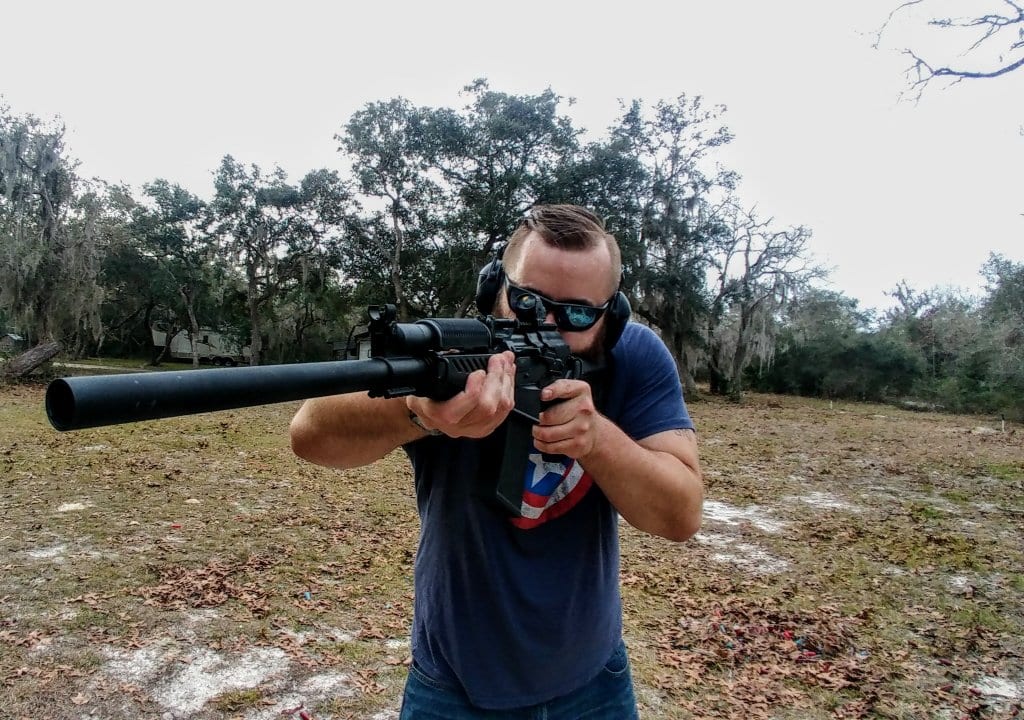 The Citadel RSS1 is a big boy. Of course its a 12 gauge, made in Turkey, that comes in an import legal sporter configuration. Unlike the Saigas which featured a very odd sporter configuration with a traditional straight stock and the trigger group moved rearward. The Citadel RSS1 keeps the trigger in the right place and uses a thumbhole stock that sits on the right side of cool. The gun comes with two five round magazines and an actual gun case. I’ve purchased rifles that cost over 2K and they come in a cardboard box. For some reason, a small Turkish manufacturer can sell a shotgun for 700 bucks and include a proper polymer rifle case. 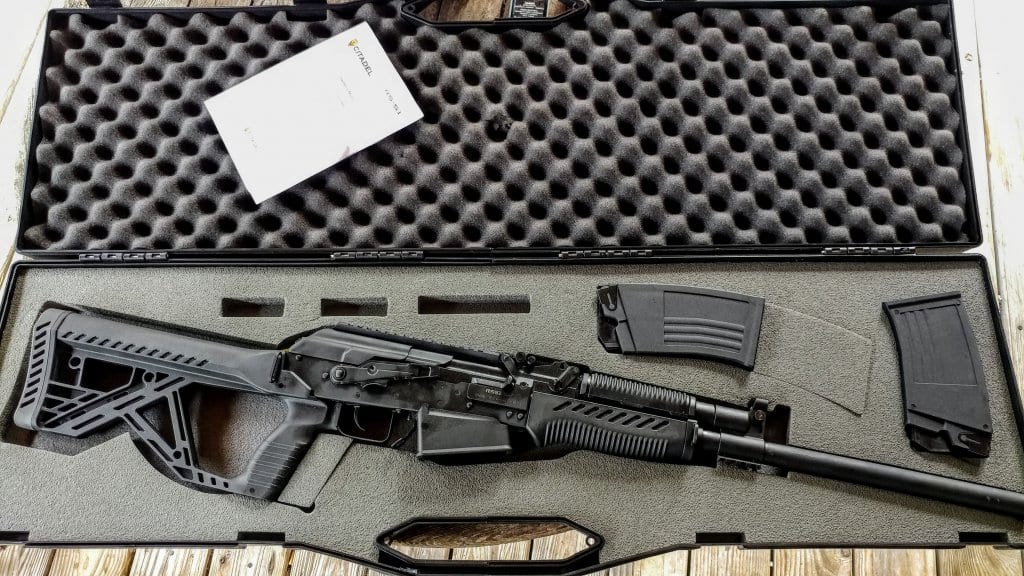 Heres the best news, the RSS1 is Vepr compatible. To me, the most important part of this is magazines. I guess this is where I should go into 922 R and how this restricts magazine size until you have the right amount of American parts in a gun. Google it, learn it, love it, etc. Once you do your world will open you up to magazines that range vastly in capacity from 10 round mags to 25 round drums. 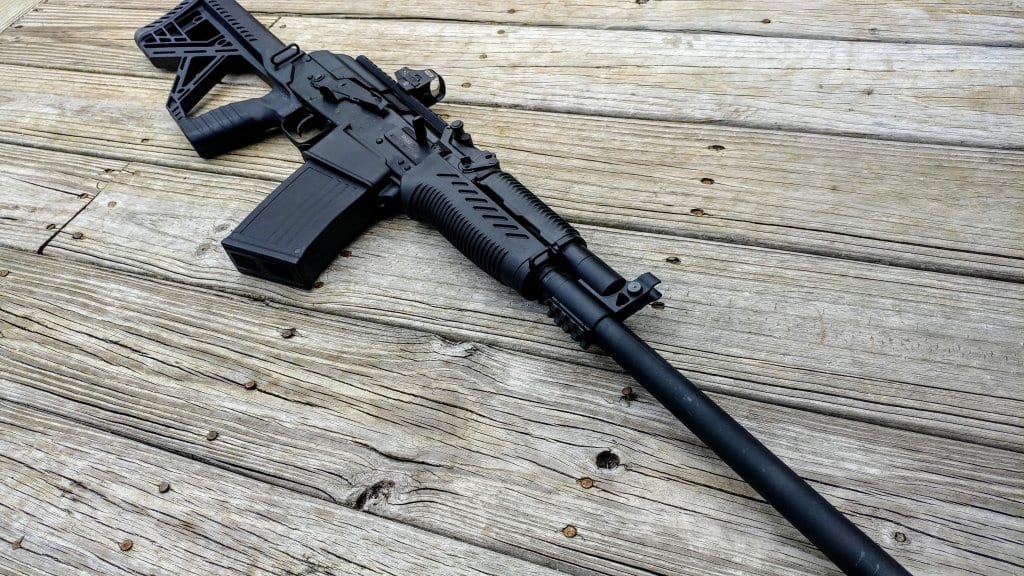 Inside the Citadel RSS1

The Citadel RSS1 is packed with features. It’s quite modern, but still very AK like. If you have a proclivity to the AK platform you won’t miss a beat with this gun. Some of the additional features include a full-length rail over the top of the dust cover that provides ample room for your choice of optic. I find a little miniature red dot is all that’s needed on a semi-automatic shotgun. In front of the handguard is a small section of Picatinny rail that’s well suited for a small light. 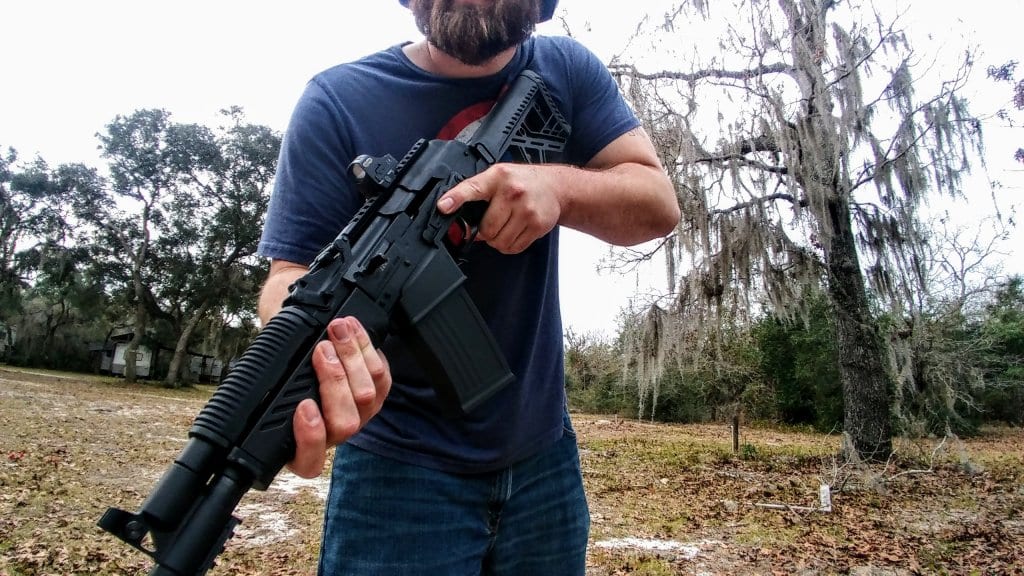 The magazine release is a massive square-shaped paddle that is very intuitive. Speaking of magazines, these do not rock in like a traditional AK. The big magwell on the gun and the Vepr style makes mean they go straight in like a AR 15 lower. This makes reloading easier and more intuitive. The gun is outfitted with a last round bolt hold open, and the best AK safety I’ve ever used. The safety is designed to be defeated by a single finger and can be done very quickly. 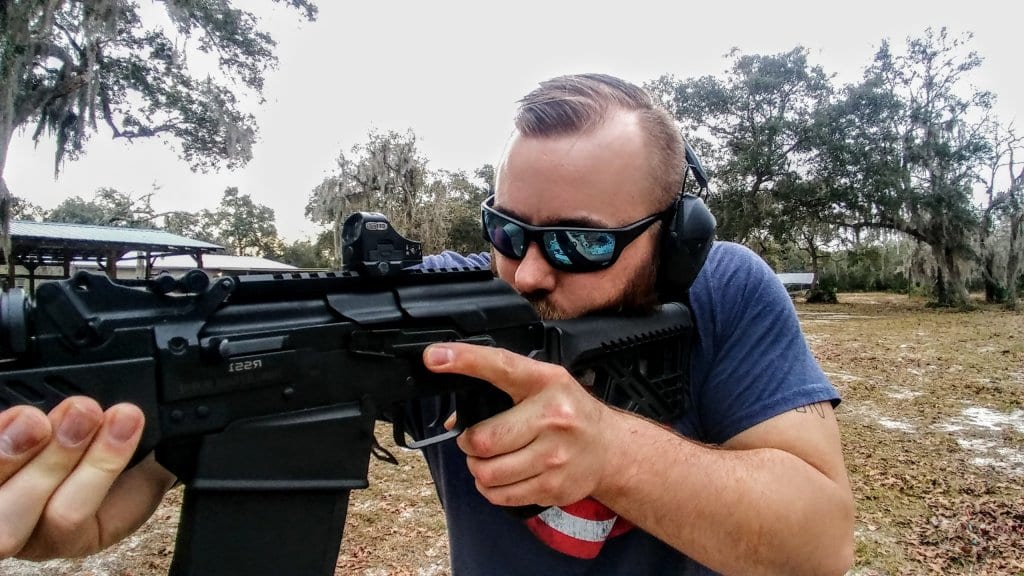 The sights are standard AK and adjustable to a very optimistic number. The dust cover is hinged and the bore is chrome lined for use with steel shot. The barrel is 20 inches long and is threaded for use with Benelli and Beretta chokes and even comes with a nice little choke wrench. The shotgun is very light, and according to Legacy it only weighs 6.5 pounds. Both sides are even outfitted with sling points.

The most important thing with any semi-automatic shotgun is does it run? Does it run with a variety of ammo, including the cheap Wally World special birdshot? Happily, I can say this gun runs with everything. Including the low brass cheap Wally world Federal birdshot loads. This thing runs fast too. I can fire all five rounds before the first shell hits the ground.

It’s my humble opinion that the Citadel RSS1 is a bit over gassed and this is what allows it to run every kind of shell with reckless abandon. The good news is it does run everything, the bad news is that a fixed, over gassed system means increased recoil and for some reason trigger slap. The more powerful the ammo the harder the bolt flies rearward, and the harder the trigger resets. With standard 2 3/4 buckshot at about 1,300 FPS the trigger smacks the hell out of you. I suggest holding the trigger to the rear until the bolt and trigger fully resets, or wearing a good pair of gloves. With birdshot its plenty pleasant, but buckshot gives a good smack. 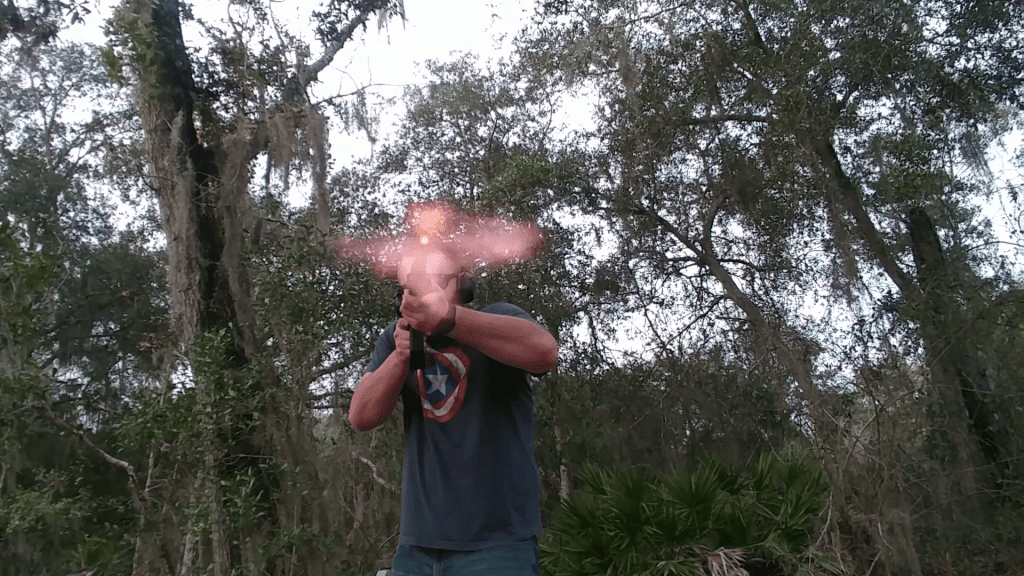 The RSS1 is reliable and it’s not finicky when it comes to being clean. Lord knows how much cheap and dirty ammo I’ve put through it and it still runs like a champ. It doesn’t hesitate and I haven’t so much as oiled it up. It runs well, which again comes from the fact the gun is over gassed. I think it would benefit from an adjustable gas system like the Chinese Saiga copies.

This all being said its a terribly fun gun to shoot. Something about throwing 5 rounds of 12 gauge downrange just makes the Citadel RSS1 an absolute blast. The 25 round drum would make this so much more fun, but until then dropping five rounds at a time is still a blast. Reloading the gun is super easy and once the bolt locks back its a breeze to reload the gun. 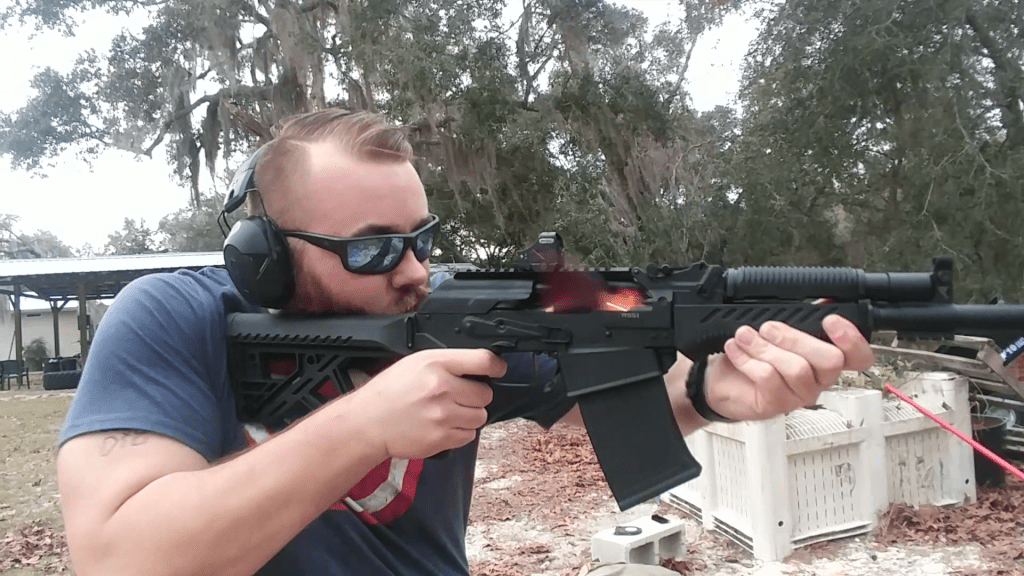 To defeat the last round bolt hold open just pull the charging handle back rearward and it goes forward in a flash. The gun keeps running. The magazines don’t drop free so be prepared to free them when needed. This shotgun was built for gun gamers who want a simple and affordable 3 gun setup. It runs wide open so its reliable with the lightest of loads.

Just for fun, I patterned the gun at 10, 15, and 20 yards to see just what it could do. It patterns pretty average with some standard buckshot and a cylinder choke. Toss in a tighter choke and I’d be curious what it could do. For a cylinder bore, it gets decent performance out to 20 yards. Tighter buckshot would be beneficial if you wanted to reach out a little further than standard buckshot.

Here are my shots at multiple distances. 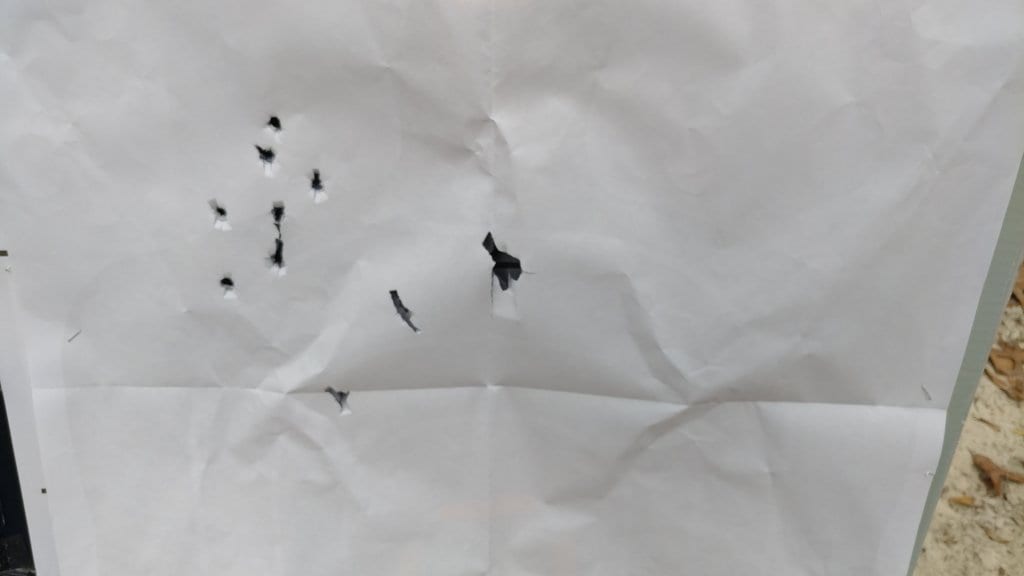 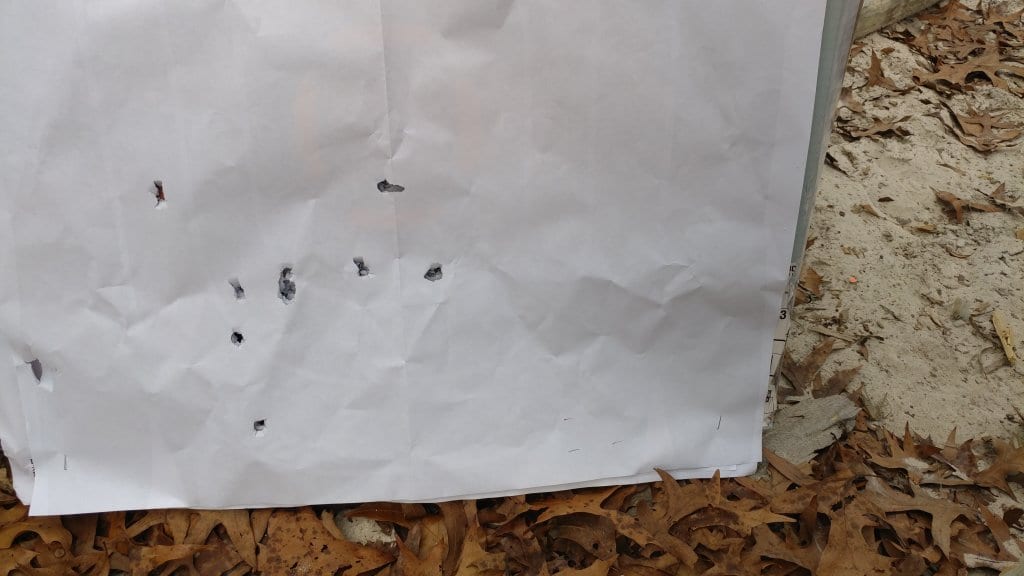 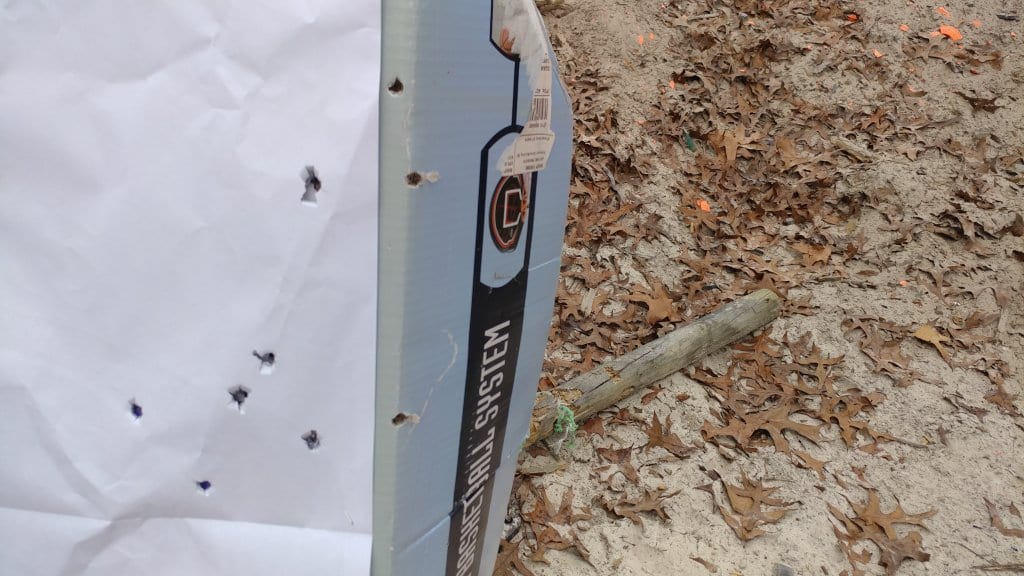 The Citadel RSS1 is a fun gun. It runs reliably and won’t leave you frustrated regardless of the ammo being fired through it. This shotgun is long, but light and the fact its compatible with Vepr mags makes it convenient to own and operate. The gun looks and handles well for a “sporterized” shotgun and out of the box its a convenient and easy to operate option for an AK based semi-automatic shotgun.