Ironic that the state bearing the very name of our first president (and his face on their flag) would seek to deny a fundamental American freedom. But they are, and they’re pushing an attempted Washington magazine ban hard.

Washington State Bill SB5078 passed the Senate in Olympia yesterday, on the road to a law prohibiting the sale of what they describe as “high capacity” magazines (i.e. those that are capable of holding more than 10 rounds). 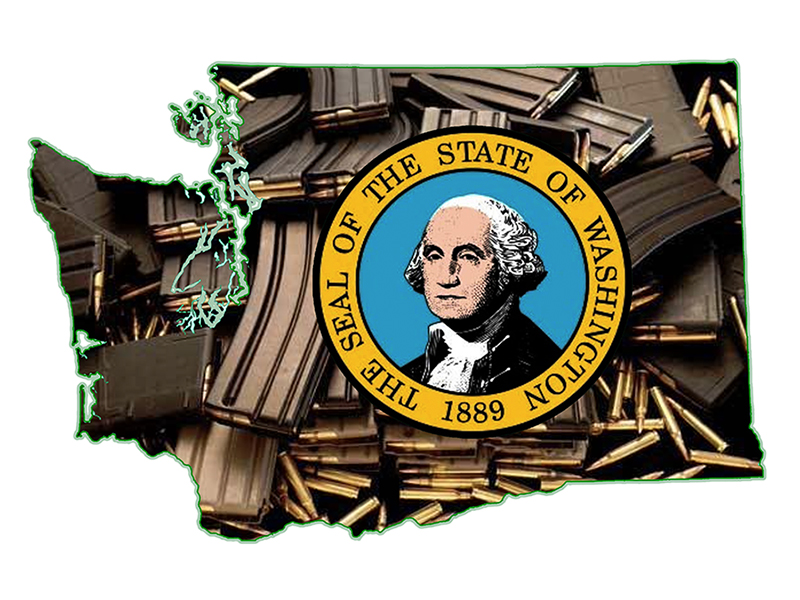 The bill was sponsored by Sen Marko Liias, D-Lynwood; the vote went 28-20 in his favor.
While this is the 6th attempt to ban “high capacity mags” in the Evergreen State, this is the first time the bill has actually passed. It now moves on to the House for consideration.
Senate Bill 5078 would prohibit the sale and transfer of high-capacity magazines, however will not forbid the possession of previously owned magazines before the effective date of this act.
There are currently nine states that restrict so-called high-capacity magazines: CA, CO, HI, MD, MA, NJ, NY, and VT.
We’ll keep you posted.

“A free people ought not only to be armed, but disciplined…” George Washington

(George, not the State)

The following is an excerpt from a statement released by the Washington State of the Office of the Attorney General.

OLYMPIA — Today, the Washington state Senate passed Attorney General Request legislation sponsored by Sen. Marko Liias, D-Lynnwood, banning the sale of high-capacity magazines in Washington by a 28-20 vote. The bill prohibits the sale of magazines with a capacity of more than 10 rounds. This is the sixth session the Attorney General has proposed this legislation. Today’s vote marks the first time a limit on magazine capacity has passed a chamber of the Washington Legislature.

“The Legislature put public safety above the interest of the gun lobby,” Ferguson said. “This historic vote represents an important step toward combating mass shootings. The devastation of mass shootings traumatizes entire communities. The research is clear — bans on the sale of high-capacity magazines saves lives. It’s time for the House of Representatives to act, and send this public safety bill to the Governor.”

“My community lost three beautiful souls to a mass shooter nearly six years ago,” Sen. Liias said. “These tragedies are all too common in America, but they can be prevented through reasonable gun safety legislation. The only use for large-capacity magazines is to inflict the maximum amount of injury in the shortest amount of time, which makes them a favored tool for mass shooters. These are weapons of war and they do not belong in our communities.”

Ferguson first proposed a limit on magazine capacity in 2017.

Sam Fischer
A daughter of the PNW and engineering administration maven, Samantha Fischer is an often-underestimated pro-Second Amendment rabble-rouser - who, despite her proficiency with assorted modern long guns, actually prefers a Henry Color Case Hardened Lever Action Side Gate in .45-70 to an AR15...though she is quite attached to her AI L96A1 as well. Sam reports on an eclectic (occasionally esoteric) range of topics, here on The Mag Life and other places.