Tapco Intrafuse: The Most Underrated Magazine 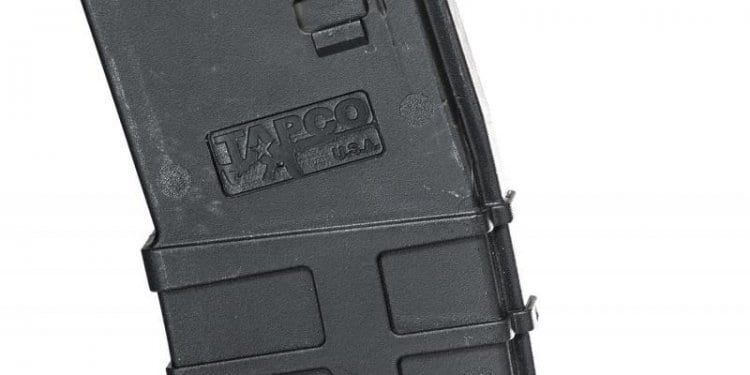 Few companies have as strange of a reputation as this company.

They make products that are both lauded as fantastic deals, and others that people claim are total junk.

But I’ve always felt that they are the victim of the vocal minority. You know, the guys that hop on gun forums and proclaim how everything made by a certain company is junk, and that the golden days of a once celebrated manufacturer are over.

Don’t get me wrong, these folks normally have very real grievances; but because no one posts that the Tapco Intrafuse mag they bought at a gunshow for 10 bucks works fine. Thus, potential buyers are stuck with lop-sided impressions of the product.

Which brings me to one of the most underrated products on the market – the lowly Tapco Intrafuse magazine.

For full clarity, I’m not going to speak on every variation of the mag – I only have extensive, first-hand experience with three models of second generation Intrafuse mag: the AK, the AR and the SKS.

First off, all intrafuse magazines utilize polymer bodies and followers. The AK and SKS models feature steel base plates, while the AR has a polymer one. All three also feature anti-tilt followers.

That said, let’s get down to each one individually. 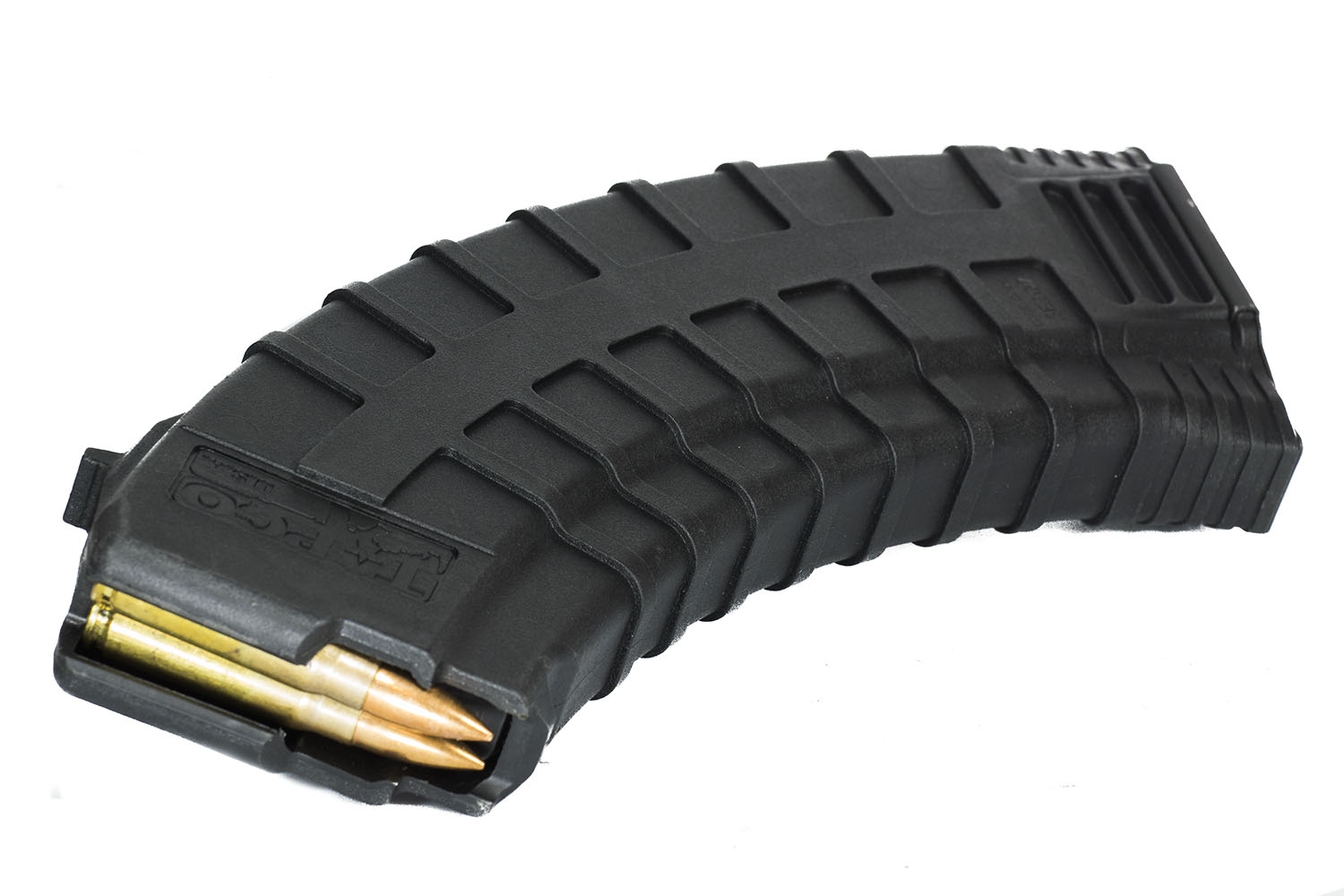 As someone who owns 15 AK Intrafuse magazines, I can say confidently they perform as well as steel mags during normal use. They aren’t as durable, so dropping one repeatedly on its feed lips while fully-loaded will result in enough damage to eventually render it inoperable.

Another thing. Intrafuse AK magazines fit all standard, military-pattern AK carbines and rifles fine. However, the don’t always fit ARs and AK alternatives like the Galil ACE in 7.62x39mm. Thankfully, this isn’t because the magazine is out of spec, but simply too thick at the neck – so shooters with a hand file and a few minutes can simply shave off a little material and get their gun running in no time. 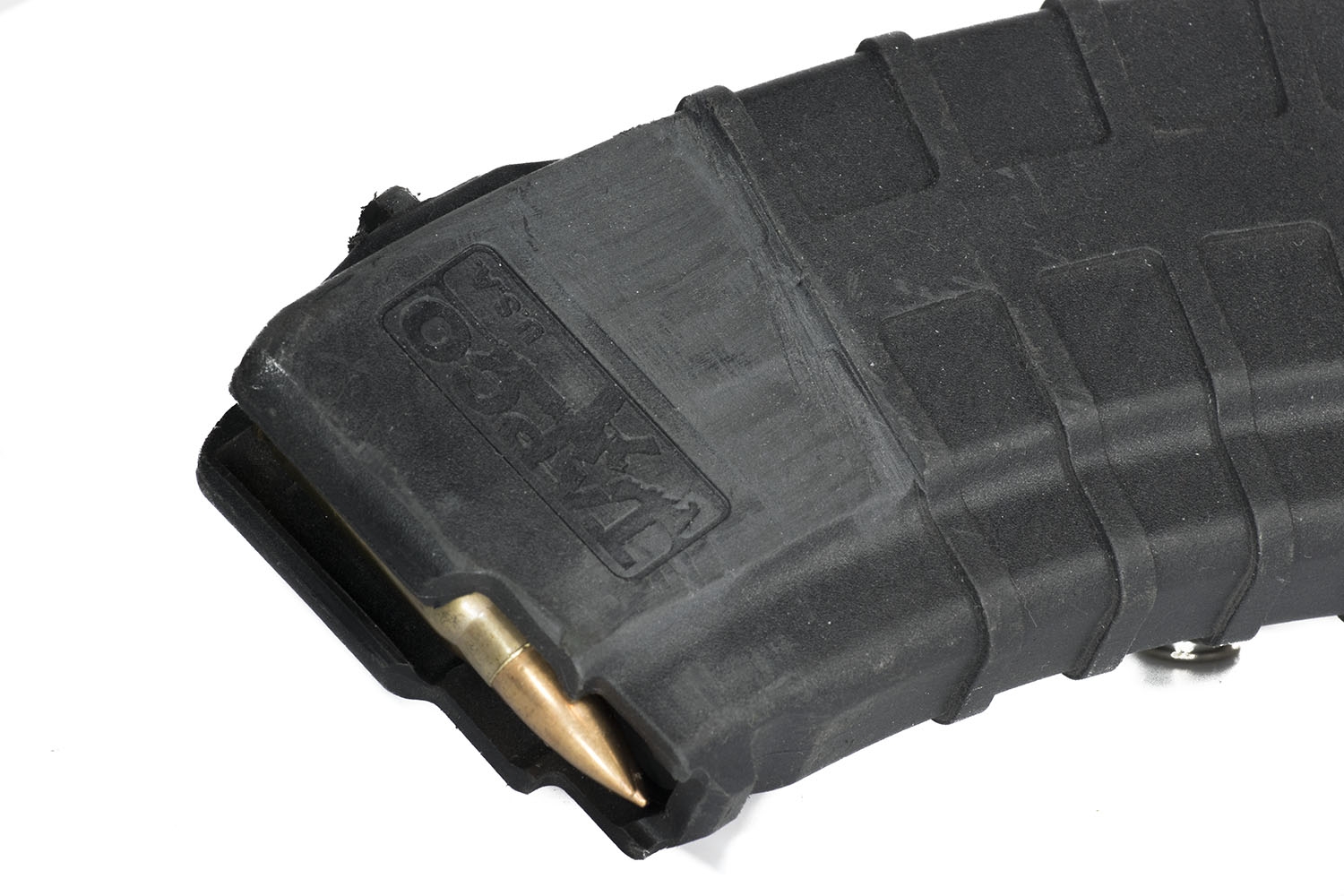 For full clarity, of the 15 magazines I’ve owned, I’ve had to discard exactly two. One because the spine of the magazine cracked, and caused feeding issues after successfully running roughly 2,000 rounds through it. The other was accidently run over by an F-150 on gravel, and exploded.

I cannibalized both of these magazine’s followers and base plates on other, foreign-made  polymer magazines to raise my total US-made parts for 922r compliance.  Note: the baseplates on these magazines do not fit standard, steel AK magazines.

While we’re on the topic of Soviet calibers, we’ll continue on the SKS intrafuse magazine. 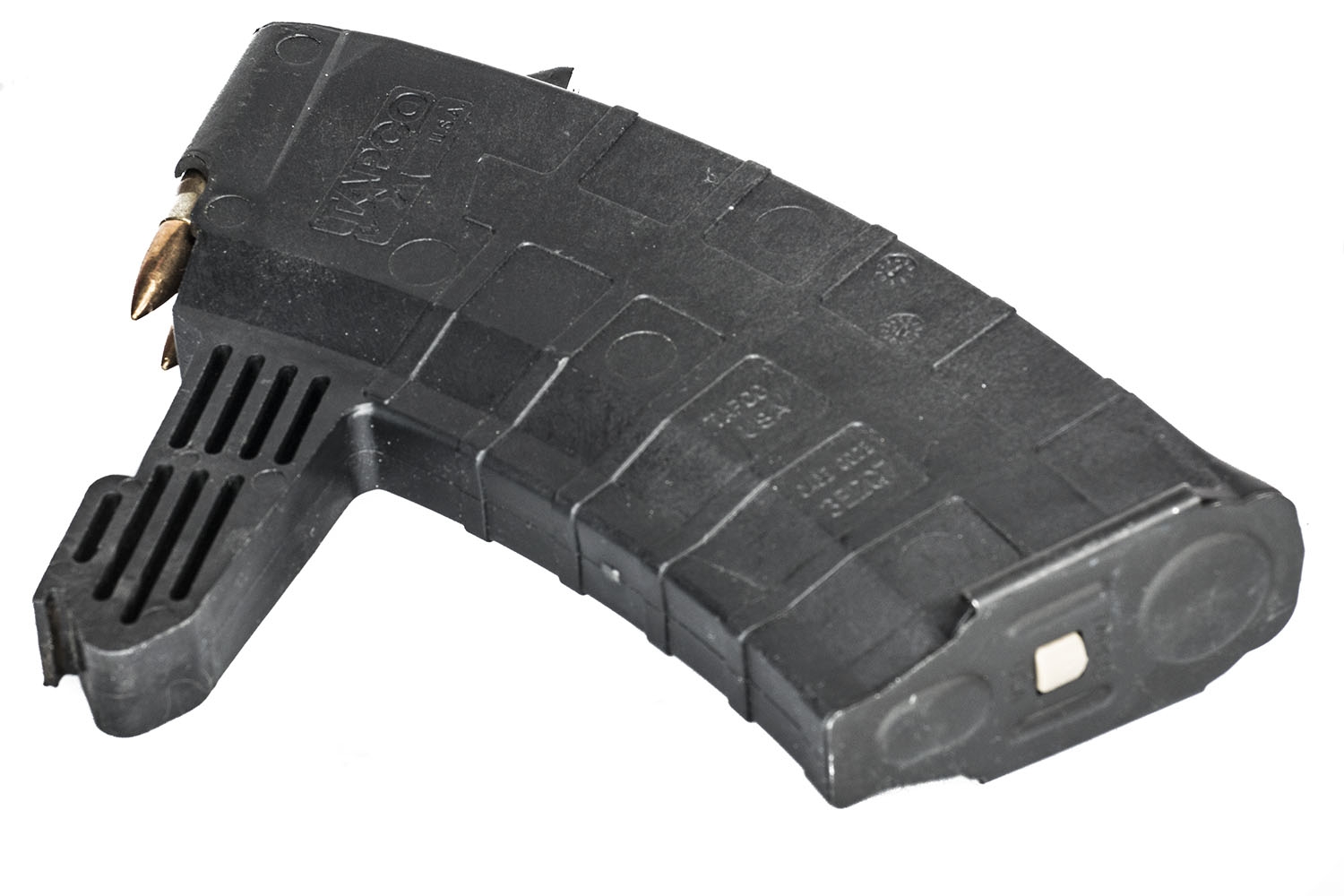 Anyone who has run a standard, mil-spec SKS knows that the Simonov carbine wasn’t designed for detachable magazines. Instead, the magazine is hinged in place with a release to allow soldiers to unload the gun’s magazine without manually cycling the action 10 times.

If this sounds strange, this gun was designed with the average Soviet infantryman in mind. He was very familiar with the M91/30 Mosin Nagant. This bolt action rifle had a similar  type of hinged magazine. Only those soldiers fortunate enough to have trigger time behind the SVT-40 and AVT-40 were used to quickly swapping magazines.

I’ve hear this reasoning is also why the the SKS and AKM have their charging handles on the right side of the gun – just like the bolt handle on a Mosin.

Simply that, the gun was never meant to use a quick detach magazine. Thus the engineers at Tapco had to invent a method of allowing the magazine to lock up where a large pin normally held it into place, while still being easily removable. 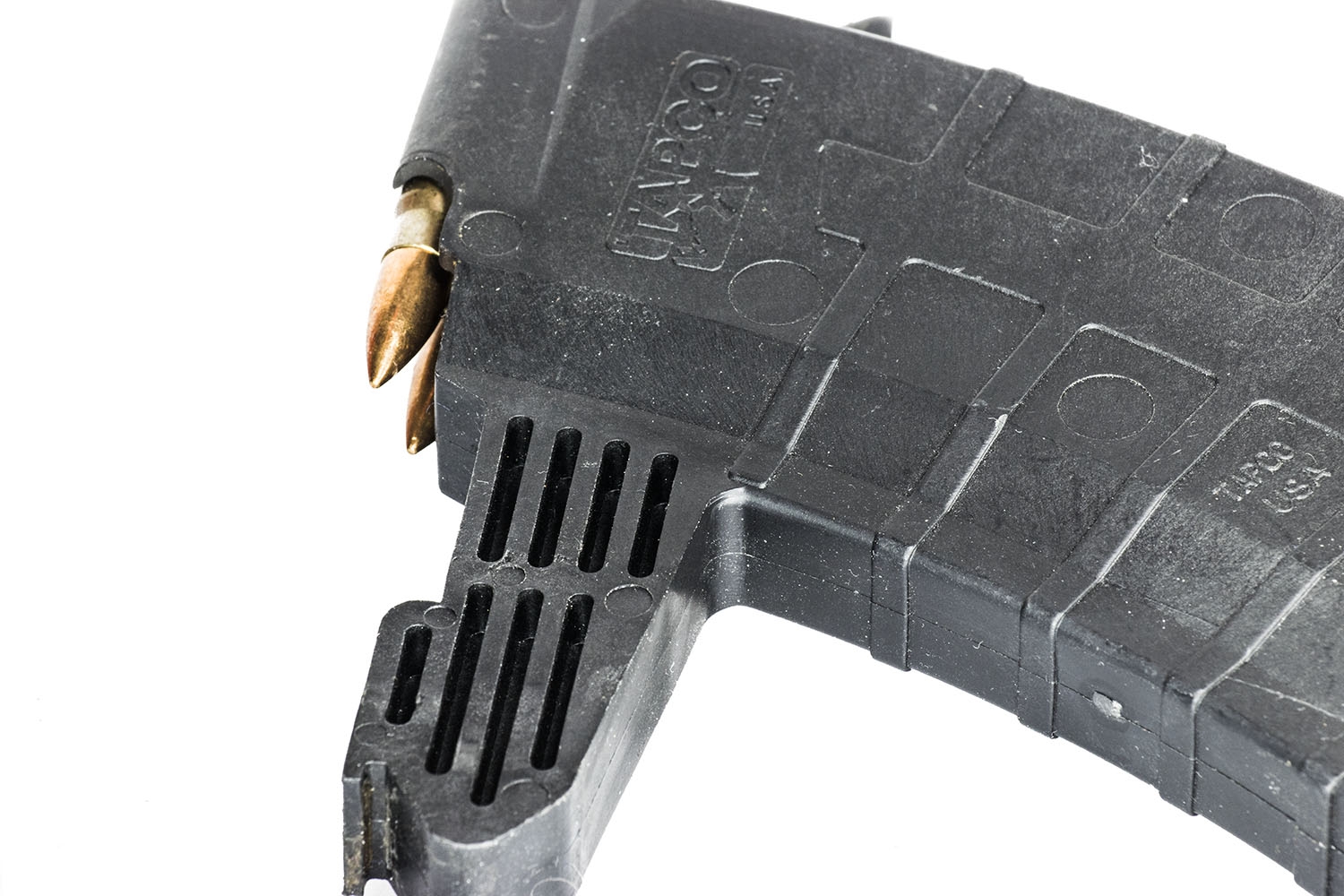 Plus these engineers had to struggle with the fact that their expanded capacity magazines also place more pressure on the bolt while it operates – plus the fact that multiple countries made the SKS with slight variances.

What’s I’m getting at, is some SKS carbines just don’t like these Tapco magazines. I own a Russian military, a Chinese Type 57 and a Yugoslavian SKS and two of these guns love the mag, the other is infuriatingly unreliable with the Tapco mag.

The Chinese model works great, but initially wouldn’t accommodate the Tapco. I had to modify the so-called, “duck bill” of the magazine to allow it to fully lock up. After which, the magazine fed and ran fine.

The Yugo locked up fine, but never fed more than five rounds consecutively without one nose-diving into the top of the chamber. No amount of jury-rigging could make the gun reliably function with the magazine. That said, the Yugo SKS owned by a colleague runs flawlessly with the same type of magazine with no alterations.

These magazine in particular is responsible for the lion’s share of bad reviews of Tapco products. But in all fairness, even extended magazines made in China at the same factory as the Chinese military SKS tend to have spotty reliability. This leads me to believe it’s less the magazine, and more the design of the rifle itself. 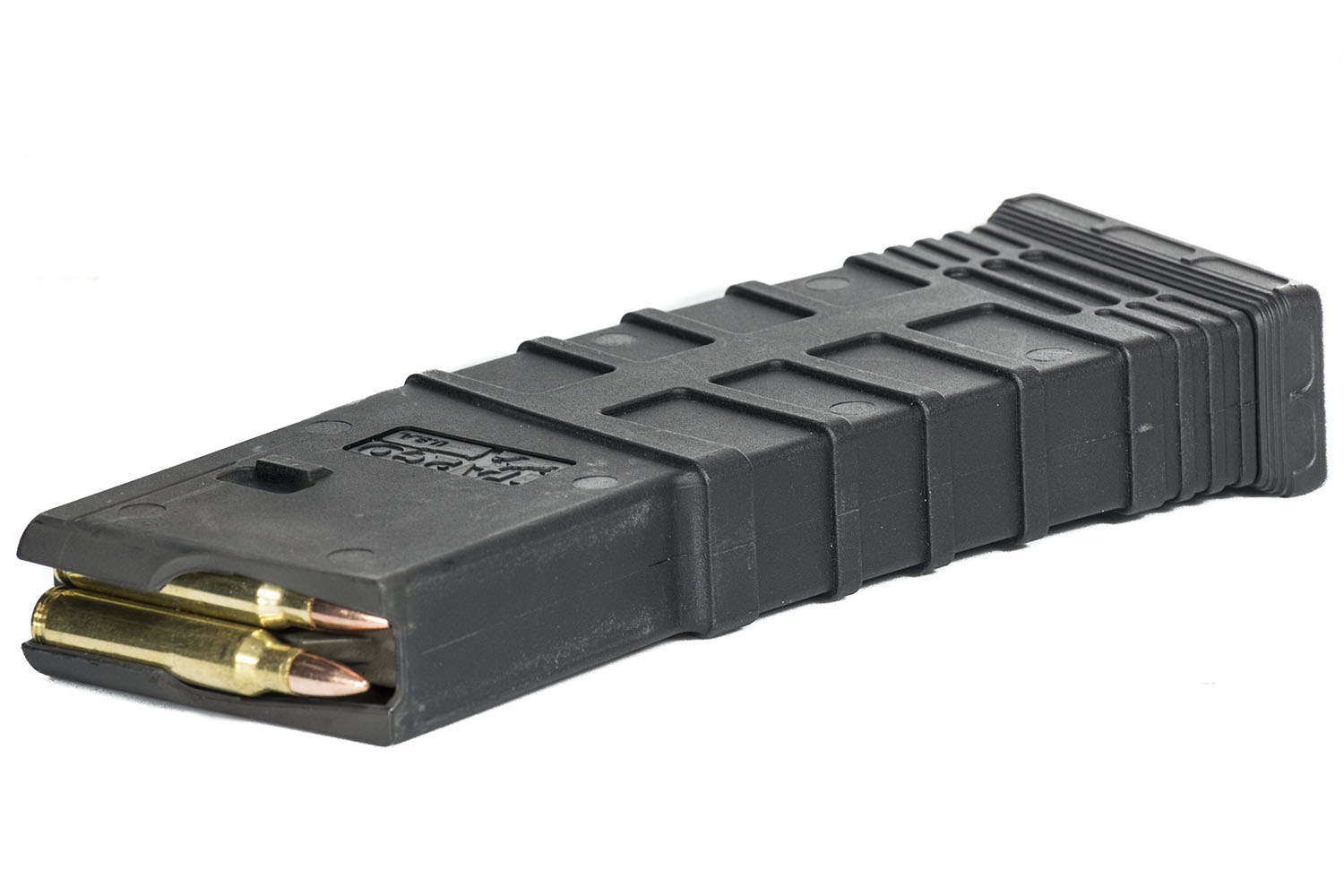 What about the Tapco Intrafuse AR-15 magazine?

Let me address the elephant in the room – no, I don’t like the way the magazine looks; it clashes with nearly every AR I’ve run it in. Though, beauty is in the eye of the beholder, and there’s not accounting for taste. Hell, many people don’t like the way Magpul stuff looks, while some folks like fellow writer Nick Chen, would get the pattern tattooed on their back if their wife wouldn’t divorce them over it.

If I’m being transparent, some of the more angular, billet lower receivers actually look pretty cool with the Intrafuse mags.

But I digress, how does the AR-15 magazine perform?

Just fine. I don’t think anyone who has actually used one would say otherwise. The problem with the Intrafuse AR-15 magazines isn’t one of reliability, but durability and longevity.

These magazines, like nearly every polymer-bodied magazine, don’t use any metal components to reinforce the feed lips. These lips control when the rounds are released from the magazine, and into the action and then into the chamber.

Because these tend to become somewhat brittle over time (especially on magazines left loaded for long durations) some shooters mistakenly believe they mags themselves are intrinsically unreliable. 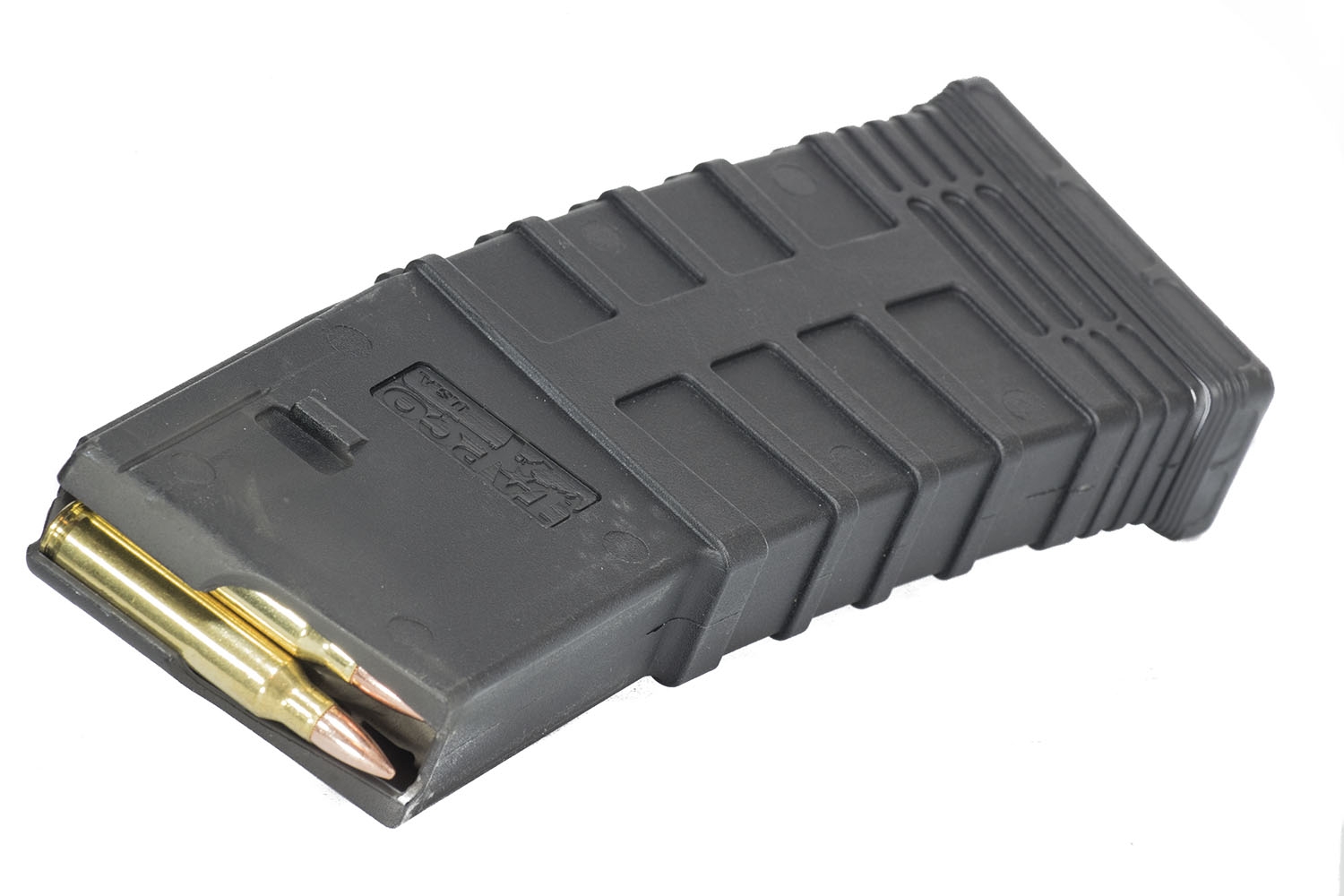 These magazines are great range magazines, and are fine with normal use and abuse. But in all honesty, they don’t hold up as well as designs that feature steel reinforcements, like my personal favorite – the Lancer L5 AWM.

Ironically, while better-made magazines used to be more expensive, as they became more popular, the nature of mass production combined with supply and demand has dropped their price to a point where the Intrafuse AR magazine isn’t really competitive.

That said, these magazines tend to go on sale from time to time, and when they do, make great range magazines. The intrafuse AK magazines on the other hand are a great bargain, and reasonably durable – especially for the price.

Ultimately, Tapco magazines aren’t perfect. But, they are a far cry from the exaggerated reports of calling them total junk by overly-vocal forum posters.