Make Your Steel Targets Smart With The T1000 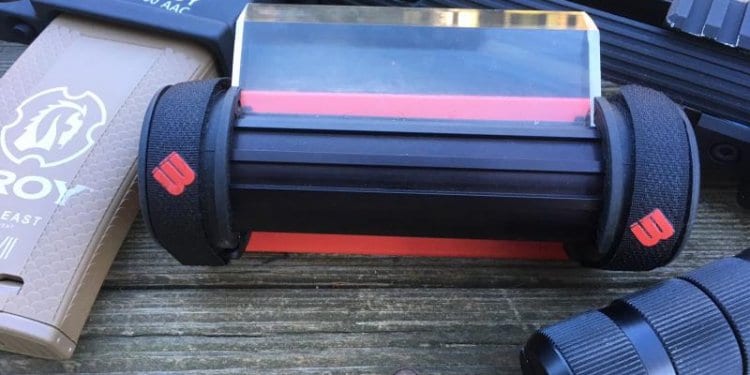 Do you enjoy shooting steel targets at distance but often have difficulty knowing if you hit the target or not? Well the guys over at Magnetospeed have come up with the T1000 target hit indicator. You velcro it onto the back of a steel target and when you hit the steel target, the T1000 senses the microvibrations and sets off a series of flashing red LEDS confirming the hit.

The T1000 is a small aluminum cylinder just 5.5″ wide. It has a clear rubber reflector that sticks out of the housing about 1.5″. The metal pipe bomb shaped device is strapped to a plastic holder by velcro straps and the plastic holder has hook velcro all across the back so you can stick it onto the back of a steel target. 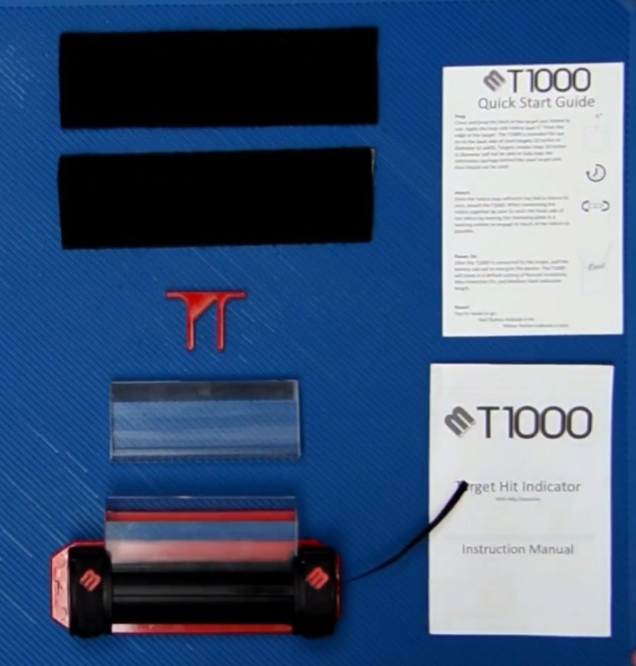 You want to use a steel target that is wider than the hit indicator. Magnetospeed recommends 10″ or larger steel targets. Small 8″ round plates will not cover up the target enough where you can see the reflected LEDs. Make sure you orient the rubber reflector in this direction. You want the angled side pointing away from the velcro. That angled side acts like a periscope and bounces the LEDs toward you. So in the photo below, the LEDs will shine to the right when activated. The T1000 will flash red if you hit the target and yellow if you miss. I used my steel target however due to the target holder design, I was unable to position the T1000 at the top or the bottom so I positioned it to the side. The head is too narrow for the T1000 to be positioned on top. You can see some water droplets on the T1000 and steel target. It was lightly raining when I tested the T1000. Do not worry, the T1000 is weatherproof. The only concern would be the velcro during freezing icy rain.

The T1000 is powered by just 2xAA lithium batteries. The batteries will last for one year on standby mode or 2,500 indications on normal mode.

There are a few different settings that you can adjust on the T1000. Such as turning the miss indicator on or off, sensitivity, and duration of flashes. Unfortunately you have to dissassemble and remove the housing to get access to these switches. 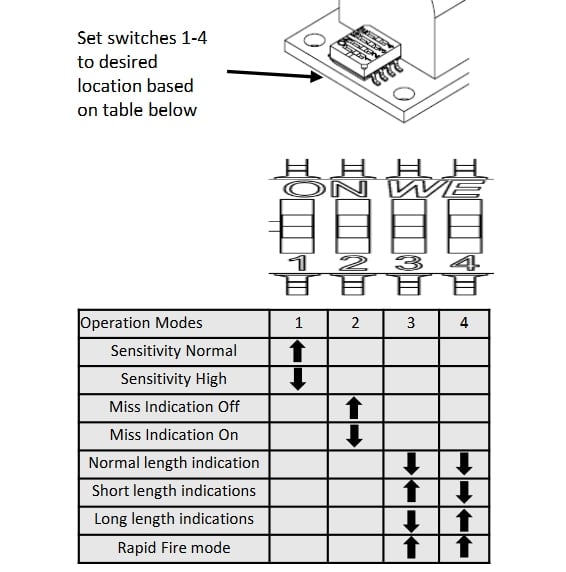 I left the switches alone and tested the T1000 with my friend Brian. We shot at the steel plate from 200 and 300 yards. I was a little concerned about the orientation of the T1000 off to the side rather than on the top or bottom. By having the T1000 on the side, I could only direct the LEDs to the left or right. I could not adjust their position vertically. This was concerning because my steel target leans forward a bit which means the LEDs would be aimed low. However once we hit the target my concerns went away. Even though I was not directly in line with the target, it was very easy to see the LEDs flashing.

Watch the video clip below to see how easy it was to see the T1000.

One problem that we noticed was that the miss indicator did not work as well as we would have liked. Brian shot all around the the steel target and he was unable to trip the miss indicator. Only by shooting another steel target nearby were we able get the T1000 to flash yellow.  I was not dissapointed by this though. In the rain and looking through a spotting scope, the yellow flashes look more orange and for my eyes they sort of looked like the red flashes of a confirmed hit. I am ever so slightly colorblind and so having the yellow not flash was actually a better indicator for me than a yellow flash. For those who do like the yellow flashing, it is a different sequence than the red flashes. I was told by Ivan of Magnetospeed that turning up the senitivity may help with the miss indicator. They are thinking of having an easter egg mode and use the yellow LEDs for night shooting. Have a setting so that the yellow LEDs stay on and switch to red when you hit the target, that way you can see where the steel targets are at night.

At only $150 for a T1000, I highly recommend upgrading your steel targets with these. Go to their website to check them out and buy them when they are available. I was truly amazed how easily it was to see the LEDs flash without any use of magnication like a scope or binoculars. Our testing was done on a couldy rainy day. I am not sure how well the LEDs will be seen if it was bright and sunny like in a desert environment where light is bouncing off the sand and lightly colored dirt. Unfortunately I do not have much opportunities to shoot past 300 yards so I am unable to really test this out for long range shooting. I will try to see if I can get this on a target out to at least 600 yards and test how much easier this will make it for hit indications but time and opportunity is slim for me.