Surviving A Riot in Your Vehicle — Awareness and Training 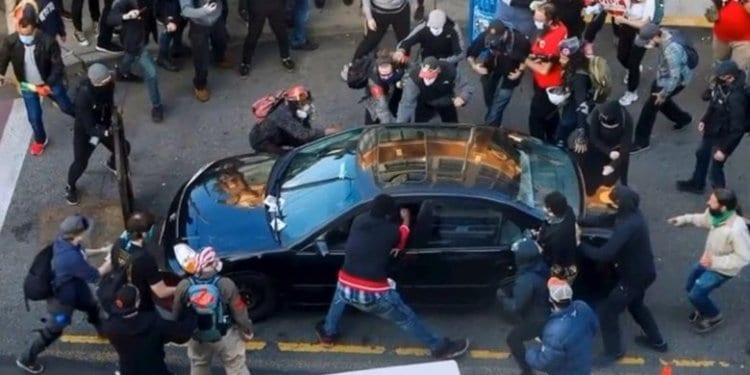 With the high level of civil unrest currently racing across the country, unsuspecting motorists are suddenly finding themselves caught in the middle of riots. They often get attacked by the mob, dragged out of their vehicle, and beaten, even though they had nothing to do with the protest and did not instigate the riot. They were truly victims of a mob mentality that feeds off its own energy. How do you survive this type of encounter if it happens to you?

Obviously, if you can avoid the situation, do it. This starts by watching the news or online to find out where the unrest is happening so you can stay away. Do you really need to go downtown today, or can it wait? Often, cities will post protest schedules on their websites – assuming the protesting group got a permit – to alert everyone to street closures and re-routes. 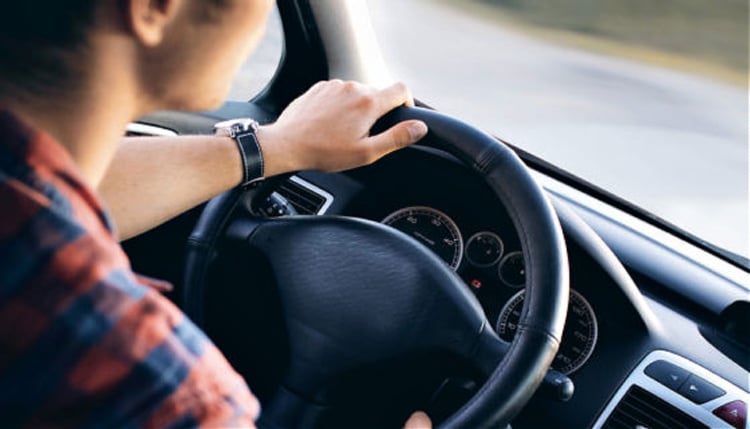 Sometimes, however, protestors don’t follow the rules (big shock, I know) and will meet up in areas unexpectedly. You turn the corner thinking you’re on a safe street and suddenly there is a mob marching straight at you. What do you do? Get out of there! Turn around and drive away. You probably don’t need to pull off any Hollywood stunt driving or jam a tactical J-turn, but make a quick-yet-safe exit from the area ASAP. There is no shame in beating a hasty retreat, especially if you have your family with you.

There are skills you can practice now to avoid bad situations before the threat becomes real. For example, thinking ahead all the time, in your everyday life, so you’ll be ready if the need arises.

“Condition yourself now by practicing reading the terrain,” says Charles (CK) Redlinger, former Law Enforcement Trainer for the Department of Defense. “Always look ahead several vehicles so you can gain insight on what is potentially waiting for you ahead.  This is a good strategy when driving anytime, protest of not.”

What do you do if you can’t get away from the riot because the mob suddenly formed out of nowhere and you’re surrounded? This can happen anytime, anywhere, not just under the current national unrest, so you need to be prepared all the time. First, carry a gun. This may seem obvious – you’re on a gun website, after all – but do you carry it all the time? You need to. Bad things don’t just happen in bad parts of town and at convenient times when you happen to be prepared. Take a cue from the Boy Scouts and be prepared – always! 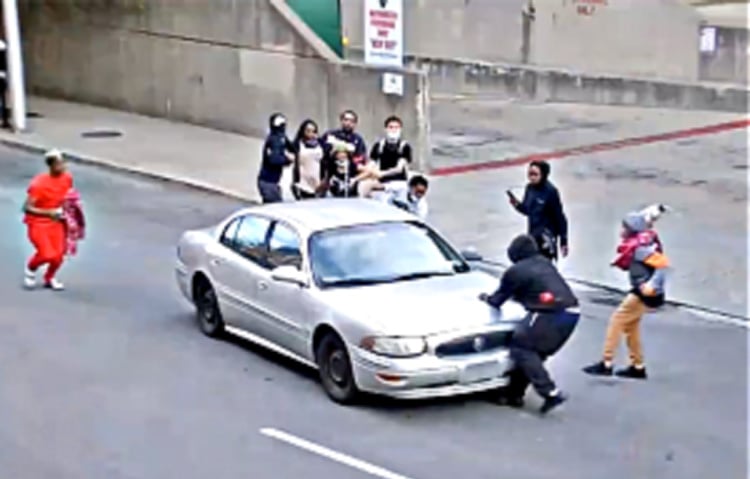 Now, this doesn’t mean you’re going to use the gun. You might, but keep it holstered for now. There are a few things that you should do first that might help you avoid a confrontation. Can you get out of the mob without hurting anyone? Will they let you just leave? Sometimes newly formed mobs still have enough respect to understand you’re not involved and will move out of the way to let you leave without incident. If so, great! Thank them on the way out and drive away safely.

There are certain “tricks” you can learn and practice to make your evacuation quicker and safer.

“Start practicing now when you drive to factor in a vehicular reactionary gap,” says Redlinger. “That means giving yourself enough room to escape by leaving at least a car length of distance between your vehicle and the vehicle or object in front of you. Don’t stop at red lights with your front bumper almost touching the car in front of you.”

If the mob won’t let you leave, that still doesn’t mean you’re in any danger. They might let you move along with them slowly if you don’t show any signs of hostility toward them. This is no time to pick a fight. Even if you disagree with their cause, keep your mouth shut. Be nice no matter what you think of what they are protesting. This is not the time to debate the merits of their cause. You just want to leave safely. Remember, it’s better to deescalate than escalate. If your windows are up, open them a crack and ask the closest protestor if you can drive out. Explain that you don’t want to get involved and just want to get out of their way. This may be all you need to get some cooperation that will get you out of there.

If being nice to the protestors doesn’t work and you feel that your life is in danger, it might be time to take decisive action. CAUTION: This is also where things can get legally sticky. Engage with deadly force only if you can legally and morally justify it. This will be a judgment call in the incident. Remember that deadly force can only be used to protect life, not property. If they are beating on your car but not coming after you or your loved ones, hold off on deadly force. Once the threat moves to the passengers, the game changes drastically.

The level of force you use depends entirely on the level of the threat. Redlinger advises, “When you find yourself boxed in and feel threatened, can you escape by damaging property first before using deadly force?” 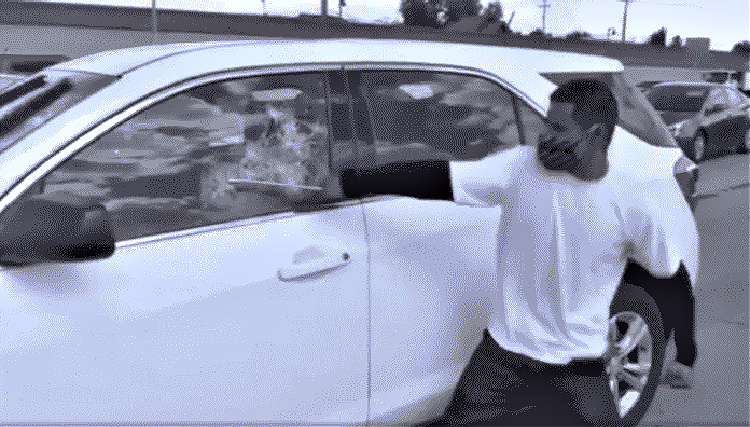 If the person outside the window just broke through, for example, and is trying to beat on you, he or she is so far your only threat. Deal with that accordingly. It could mean using your gun or improvising another solution.

Sometimes a non-lethal alternative such as mace or bear spray can do the trick. Just make sure the nozzle is outside glass so you won’t spray yourself.

If the mob in front is starting to gang up on you, it might be time to escalate the action. Your car can be considered a deadly weapon, which is both good and bad. The good side is you can use it to stop a mass threat. The bad side is that using it can turn on you in court. Check your local laws to know what is allowed and not allowed when trying to escape a crowd.

We have seen instances of rioters slashing tires of vehicles trying to escape. Don’t let this stop you. It only takes 11 seconds for a mob to flip a car, so you need to get out of there immediately, even if all four tires are flat. You’ll be amazed how far you can drive on flat tires. Get as far away as you can, safely out of riot range, before stopping to call AAA. And tell them they may need to bring a few extra tires.

Train Shooting from Your Car 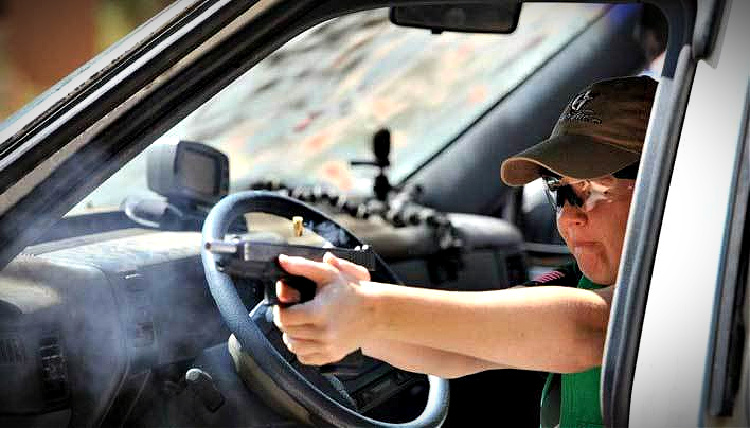 Before you ever get involved with a mob, you need to have the skillset and training to handle the situation. This includes drawing and shooting from a seated position in your car. Train with an expert in urban combat, someone who understands the unique dynamics of vehicular engagements, such as how to draw, how to shoot through windows, and other important skills. This will not only help you in the moment but also in court when the prosecuting attorney tries to impeach your abilities and judgment. The more training you have, the better you look to a jury.

Positioning your gun is critical, just in case you need to use it. You probably have a favorite carry position, chosen because it’s comfortable and you can quickly access your gun. But can you access it from a seated position? If you appendix carry, you’re set up for success, but if you strong side carry, it may be tough to clear your cover garment, lean forward, and unholster your gun. Not saying it can’t be done, but it will take additional training. Keep in mind that you will likely have to draw with the seatbelt on, restricting your forward motion. This is to prevent someone from yanking you out of the car.

If you must shoot through a window, remember there will be flying glass — not just out toward the target but also back at you. Keep a pair of sunglasses or clear glasses handy to protect your eyes from flying shards. If you’re already wearing glasses, those will work fine. Keep in mind, however, that many of these encounters happen at night when you’re probably not wearing your sunglasses (unless you’re Corey Hart cool).

When shooting from a car, be fully aware of where others are seated. The last thing you want is to put an innocent person in the crossfire. If the others in the car have guns and engage, too, divide and conquer by sectioning off the car using verbal commands.

Perhaps this should have been at the beginning of the article because it’s something you should do immediately, but be sure you have legal protection in the form of some sort of legal defense fund. Companies such as US Law Shield (no, this is not a paid endorsement) and others will help pay for your legal defense should you be arrested and charged with a crime relating to your actions. Remember, getting arrested doesn’t mean you’re guilty — only that you’ve been charged and will have your day in court.

As always, your best bet is to avoid the situation in the first place. You really don’t want to get caught up in a riot. But if you find yourself stuck despite your best efforts, know what you can and cannot do to get you and your loved ones out safely.

Welcome new gun owners: we’re glad to welcome you to the community & happy to help you learn.