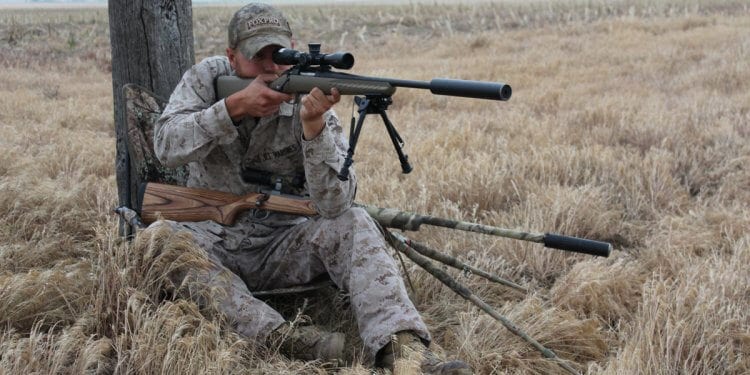 Predator hunting has been a passion of mine for many years. Testing new gear and techniques to increase my success is what I strive for. My main gun is a 220 swift shooting a 52gr projectile at 3800fps, and is equipped with a suppressor. I love suppressors! Not only do they make shooting hearing safe, it also dramatically increases my chance to call in a second predator after shooting the first one.

Even with the can on the end, you still get the sonic report from the bullet breaking the sound barrier. So hunting predators with a subsonic round to eliminate that crack became my next project. 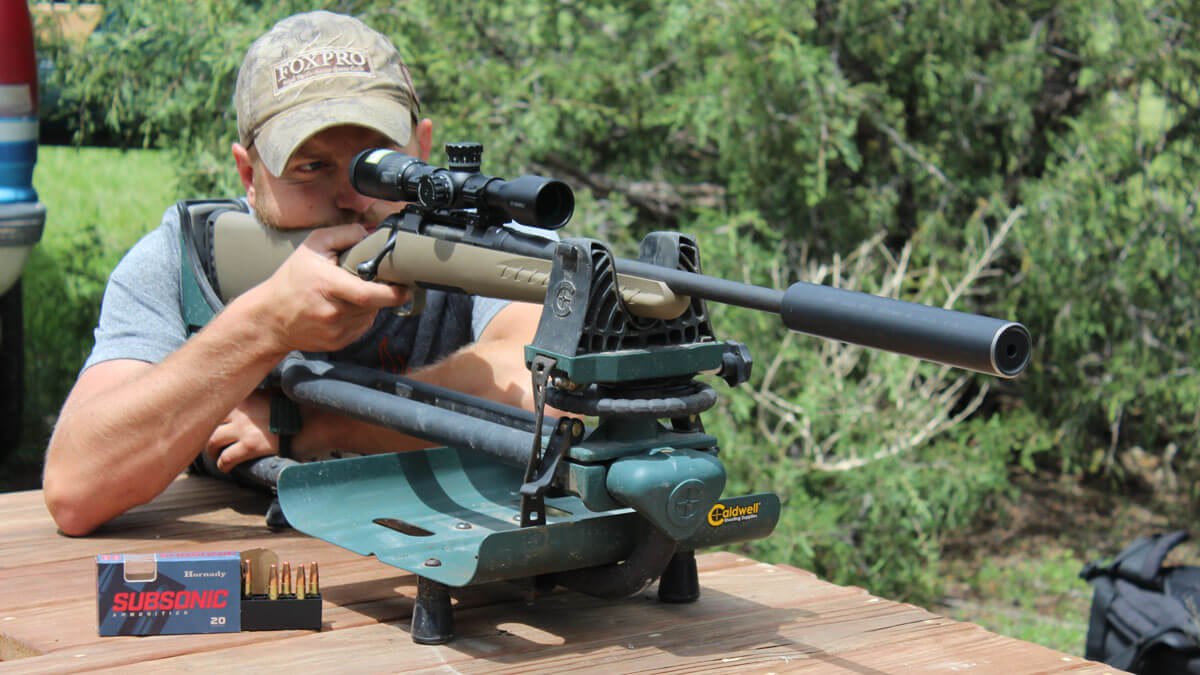 A solid choice for the subsonic rifle, and one that is easy on the wallet, is the Ruger American Ranch chambered in 300 Blackout.

Shooting a subsonic round at predators, mainly coyotes, comes with some difficulties. One, a bullet traveling under the speed of sound loses a lot of kinetic energy, which decreases the chance of putting the coyote on the ground effectively. Second, the trajectory on a subsonic round is greatly inferior to one of supersonic speeds.

I call coyotes in close. The majority come into a distance of 50-100 yards, so trajectory becomes less of a concern and kinetic energy becomes more vital.  For this reason I started to carry two rifles. My main rifle shoots supersonic ammunition, so a secondary rifle can shoot subsonic ammunition.

For this secondary rifle, I wanted one that is short, light, cheap, and chambered in an effective subsonic cartridge. The Ruger American Ranch chambered in 300 Blackout fits that bill. The gun has an msrp at $529 (and an actual retail price at much less). It weighs in at 5.9lbs and has an overall length of 36” bare, which makes it very easy to carry as a secondary rifle to each coyote stand. Extra magazines are readily available, so you could even carry varying types of ammunition. 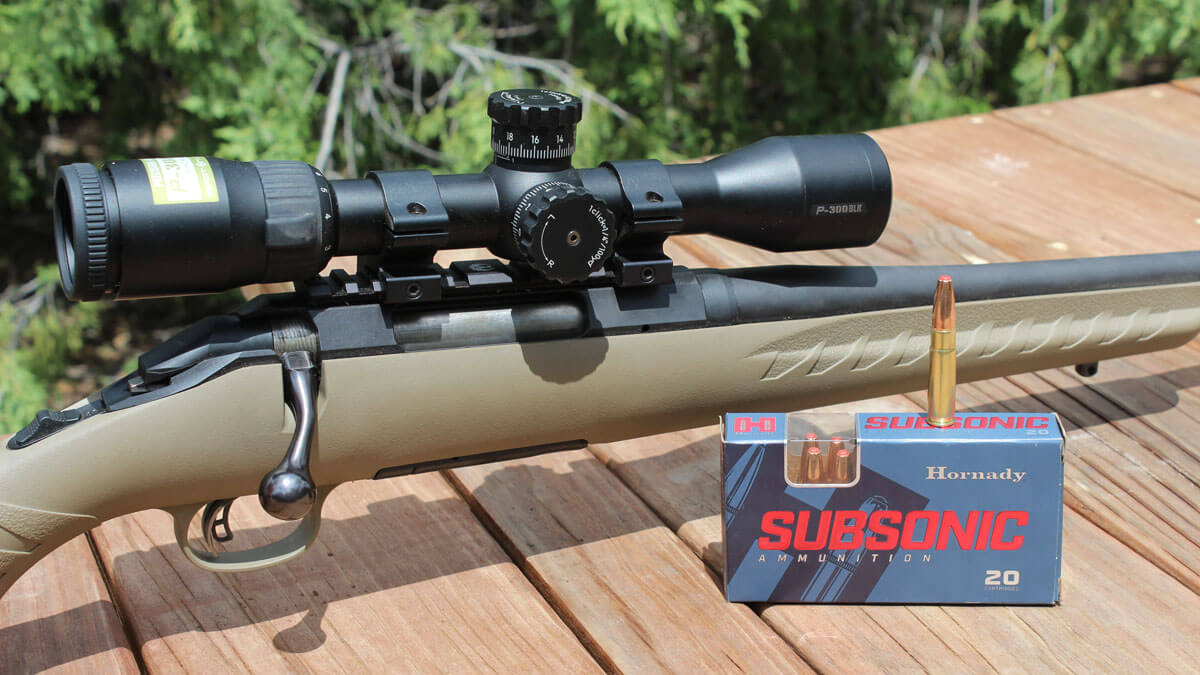 There are excellent options for 300 Blackout ammunition. These Hornady hollow points will still expand, even at subsonic speeds.

Having this rifle chambered in a 300 blackout, I will be shooting a 190gr Hornady bullet at 1050fps at the muzzle. This heavier projectile traveling at that speed will give me a more desired kinetic energy at 100 yards or less, versus a smaller/lighter projectile at subsonic speeds, such as a 223 Rem.

With this heavier grain projectile, the bullet drop increases significantly. But for shooting 100 yards and in, it’s more than doable. The trajectory on this round sighted in at 100 yards, drops 33.4 inches at 200! But I have found that once sighted in for 50 yards, at 100 it drops only 6 inches. A 6 inch drop between 50 and 100 yards isn’t the most desirable trajectory as you can imagine. But for the majority of the coyotes that come into that range, its defiantly doable and worth being that quiet. 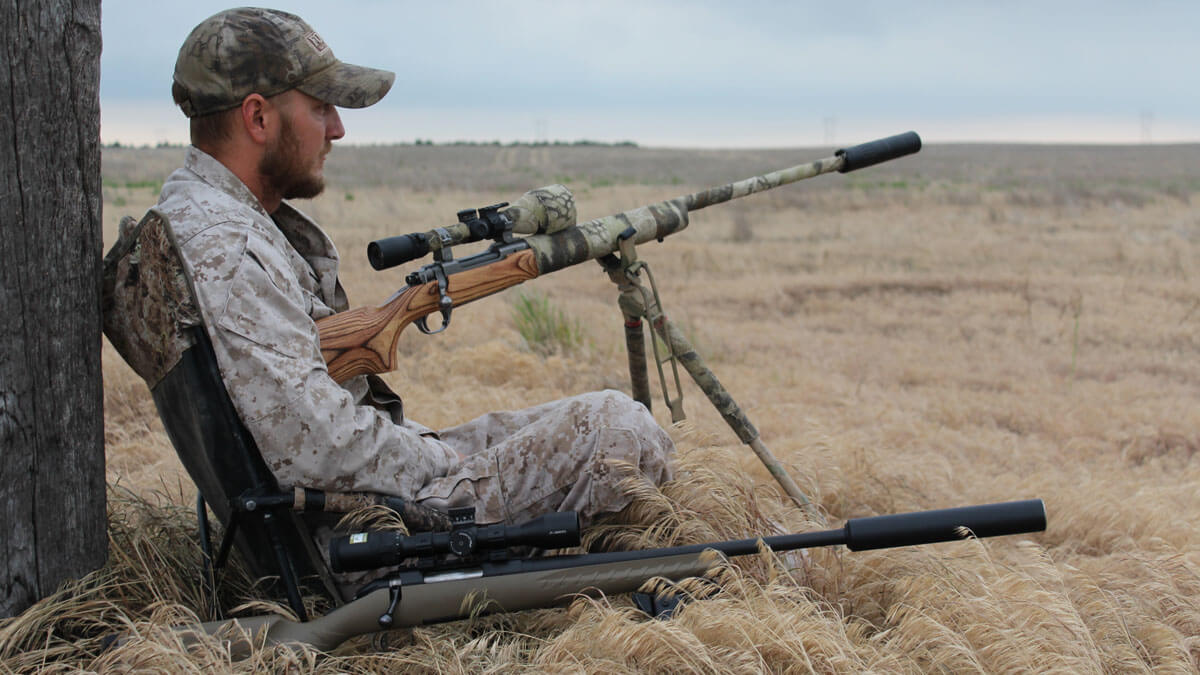 With the two rifles, the hunt takes on new levels of complexity and fun.

The strategy of implementing this as a second rifle is much like the one many predator hunters use by carrying a rifle and a shotgun. Using the rifle for more precise shots at longer distances, or switching over to a shotgun for those quick shots, that can be up close and personal. But a shotgun is loud!