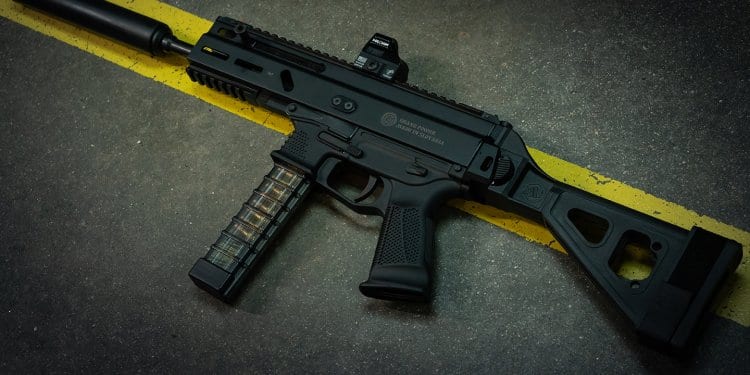 Imagine for a minute that B&T was at Octoberfest and was really tying one on. FNH is pretty much three sheets to the wind too…then the two bump into each other after getting another pint. Beer goggles being what they are… Well, the by-product of that chance encounter gave us a little thing called the Stribog. It’s a creation by Grand Power, and it’s a 9mm “sub-Gun” for the masses.

The Stribog SP9A1 is quite literally the definition of “under-promise and over-deliver.” Honestly, Grand Power has brought to market one of the most underrated and most fun weapons I’ve tested in a long time. Did I happen to mention that it only also costs around $650? 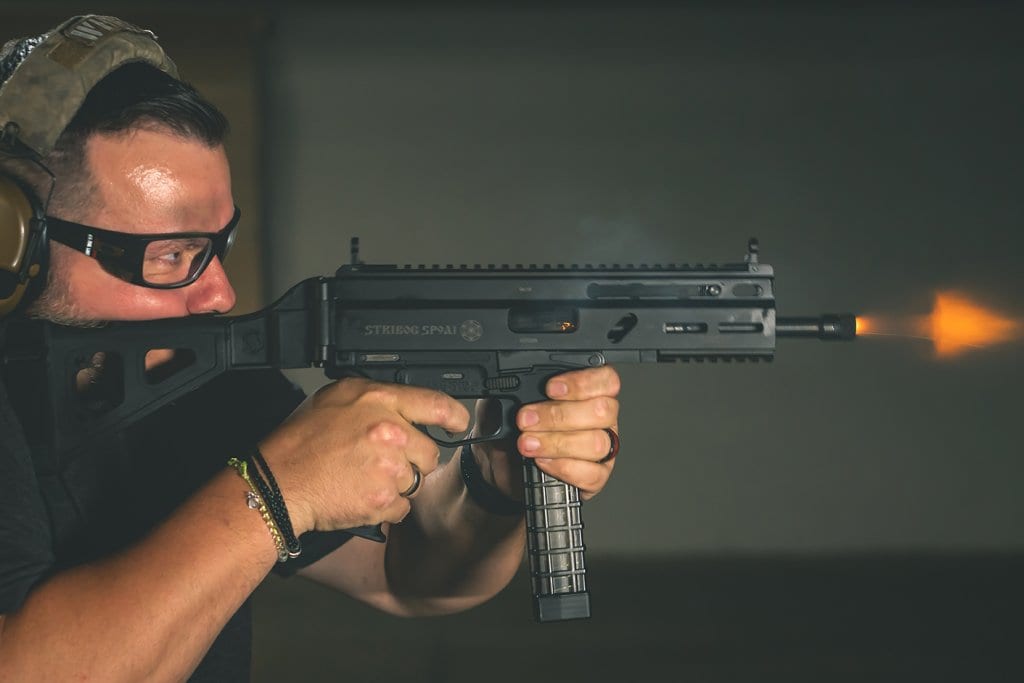 Before we get all in-depth on the nitty-gritty, let’s talk about that intro. As with many firearms in the modern era there is always similarities or “inspired” parts and engineering overlaps. Some things just work regardless of name or price tag. Everything I am about to say has zero bearing on the quality or prestige of the mockumentary this article opened with. That fictitious tale was only meant to illustrate some of the more defining characteristics and similarities so as to better illustrate reference points.

To be clear, I highly doubt either B&T or FNH has anything to do with the Stribog. But some of the similarities are undeniable.

The upper appears to be a simple single piece extrusion of what I believe to be hard anodized 7075 aluminum. It’s square and thick without having that heavy and overbuilt feeling. It’s simple, and like the SCAR everything slides in from the rear and reciprocates inside that space. It’s simple, cost-effective and efficient. Appearance-wise it has a very striking resemblance to a B&T APC9, which is very much coveted by the “insta-gun” community (especially with the HK MP7 being the holy grail of insta-likes and YouTube views). This model utilizes an SB Tactical folding brace that actuates with a single button press to unlock. If that flavor isn’t for you the Stribog comes with a replacement end cap for that true “k” feel on the end of a single point sling.

The upper also has built-in M-Lok, Picatinny rail from rear to muzzle as well as built-in flip-up backup sights. Bonus on the sights, when flipped down they are still a rear blade and front sight post for close up shooting. Flipping them up gives you some extended range sighting from an almost HK style front sight post and rear peep. And before everyone gets up on their high horse about them being polymer, you have more than likely owned at least one set of Magpul MBUS and/or have used Glock sights, so stop it. If you are super concerned, take some solace in the spare set they provide. 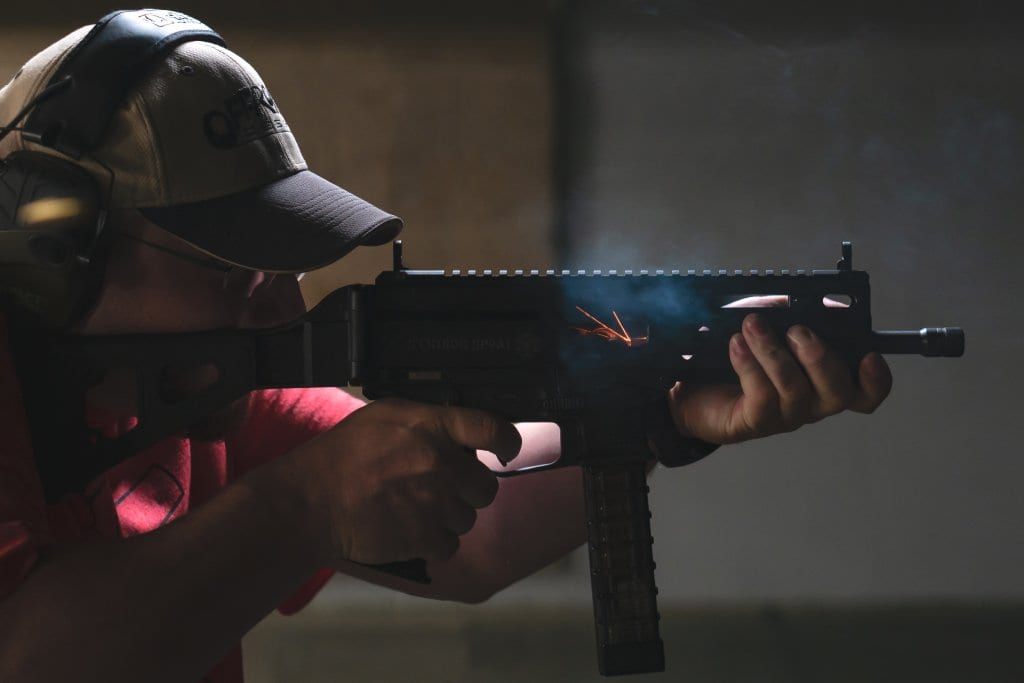 The one weird aesthetic aspect is the barrel itself. Unlike the APC9 the barrel extends a couple inches past the end of the receiver with a very prominent shoulder before the thread protector. The previous and relatively unknown generation of Stribog had many complaints of being over-gassed. I have to believe part of their solution to this Gen 2 is to get more burn with more barrel. I could be wrong though.

All those things aside, most notably given the ergonomics of the pistol is the non-reciprocating charging handle. It is reversible for all the wrong handers out there, or just one of those weirdo AK aficionados that worry about Manual of Arms consistency across different weapons. Like I said, weirdos. 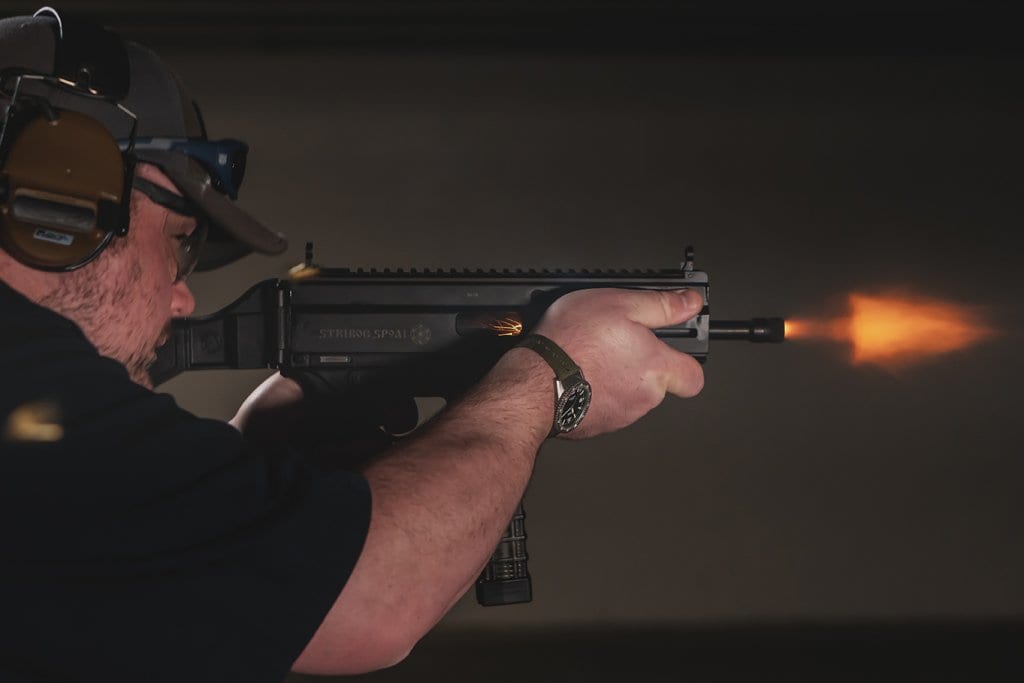 This brings us to the lower receiver. Ergonomics don’t stop with the reversible charging handle. You have ambidextrous safety, magazine release and bolt catch. While all of these neat ambi features are great and function, this is possibly where some of the perceived cost-cutting may have taken place. The selector itself is polymer and sleek. Safety works exactly as it should with a good solid “snap” sound on and off. There is however some play between the contact and the movement of the actual lever itself. To be perfectly clear, I have zero concerns about the safety coming off or on when I don’t want it to. It’s the connection between that polymer selector and the internal component that has some play, almost as if the polymer is just an angel hair larger than the part it’s moving. Think of every time you used a Standard Allen key to turn a Metric bolt. It works, but you always have that fear of rounding something if you’re not careful. But for the price of a new Glock or M&P, not a deal-breaker.

Another feature that is great and works, but could use improvement is the bolt catch. Reminiscent of an AK safety it is a steel stamped part that requires almost no movement to work. It takes more physical movement to lock back a Glock slide than it does to lock back the Stribog. The downside is that there is more purchase area on a Glock slide lock than on a Stribog.

Let that sink in. 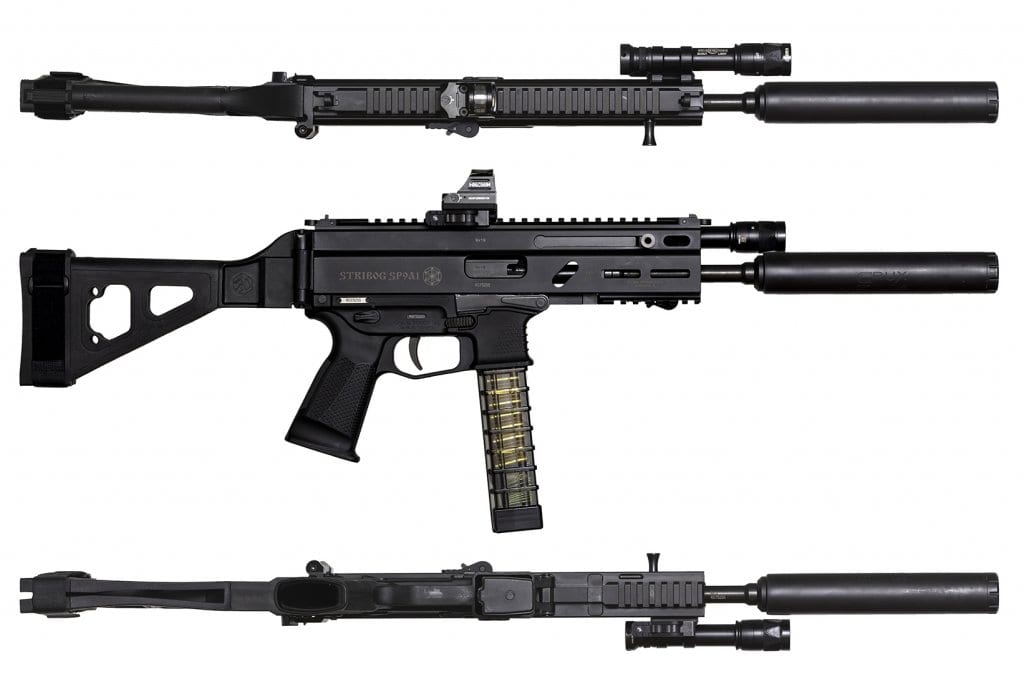 If the stamping had literally 1mm more of a ledge for your finger to utilize as leverage I would have zero complaints. Again though, not a deal-breaker.

The grip is very ergonomic and comfortable. Like a skinner Stark grip for AR-15’s and textured just right. Functional and aesthetically pleasing, all these lower components are clean, smooth and streamlined. This pistol packs down very slender and flat. If nothing else I haven’t seen something that looks this good in this class for this price point.

The whole lower does not separate easily for complete disassembly, but the field strip procedure is amazingly simple and straightforward. The rear pin is captured and is all that needs to come out for the whole upper and lower to separate on the front pin hinge. From there you have full access to the trigger components which appear to be very similar to an AR-15 and/or an MPX. Same same, but different.

But how does it shoot? Surely there has to be some sort of negativity, especially in comparison to such prestigious and high-end competition right? This is where we get the “Under Promise and Over Deliver.”

If I had to complain, I would complain about the pull weight of the trigger or the slight play in the SB tactical brace but honestly, it feels like I’m just being extra picky.

The trigger is not a fine-tuned 3lb high-speed situation. It is, however, a good solid clean break, very positive reset with almost zero take-up on reset. That’s huge. And if you know how to clean up a sear and change springs out… for quite literally a few dollars you can make this trigger amazing. 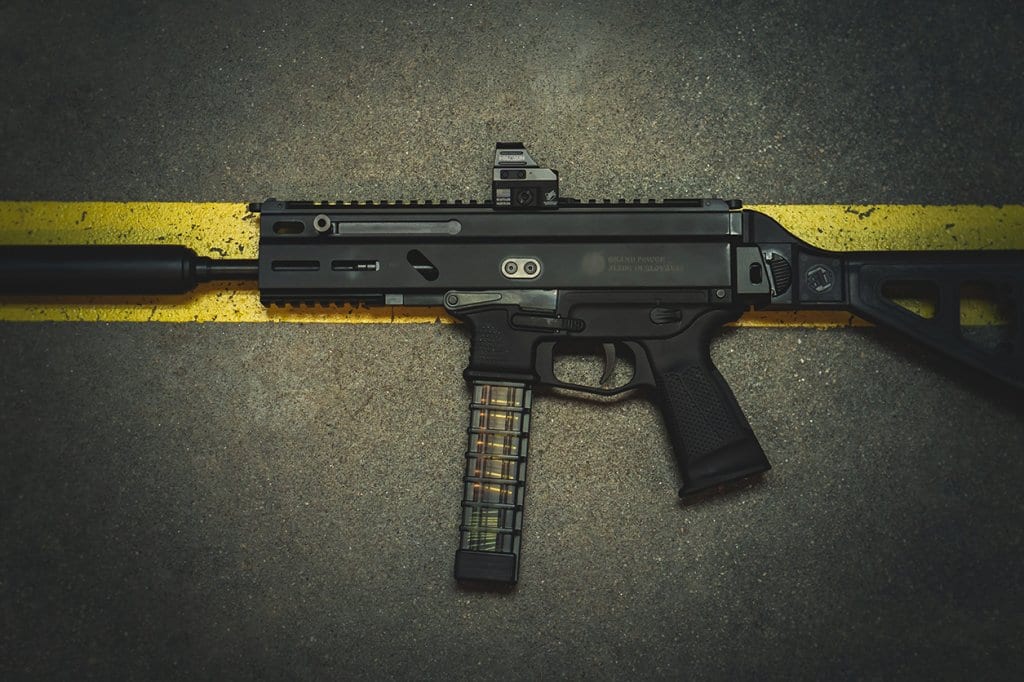 As for the SB Tactical brace…  it’s a brace, not a stock. That’s like me saying sunglasses are not letting enough light through at night. They’re sunglasses. I can’t fault an arm brace for not being as solid as a stock because it’s not. Both literally and figuratively.

I would not expect a $650 sub-Gun to run like a sewing machine. I would expect gritty, trigger with feeding issues. Shoddy polymer and cheap steel. The Grand Power Stribog is none of those things. Reciprocation is smooth, no gas blowback in your eyes, even with a suppressor on it. Even for a 9mm it is neither soft shooting nor flat shooting. It also does not bounce around or shoot jumpy. It is a very easily repeatable and trackable muzzle rise and has accurate fast follow up shots. I have put over 1000 rounds through this pistol and it just gets better and better. Even opening it up to see wear and any parts that need cleaning shows almost no signs of cheap coating wear and there is still fresh unfouled oil in the upper.

This may be my new favorite backpack, truck or travel gun. It comes with three polymer 30 round mags, can shoot folded or unfolded. It runs clean and when equipped with a half-decent suppressor and heavy rounds… it sounds like the suppressed shotgun from “No Country for Old Men” or a decent Nail Gun. All you get is the sound of the bolt cycling and a gas blow off. It is very satisfying.

The Grand Power Stribog SP9A1 is possibly the best sleeper and most bang for the buck gun I have encountered in a long time.  It is difficult to believe that a gun this good doesn’t have a price tag with a comma in it. And not in that $999 marketing way. Legitimately less than $700. You get three mags, ambi controls, non-reciprocating charging handle and a foldable brace all in a package that runs like a top. 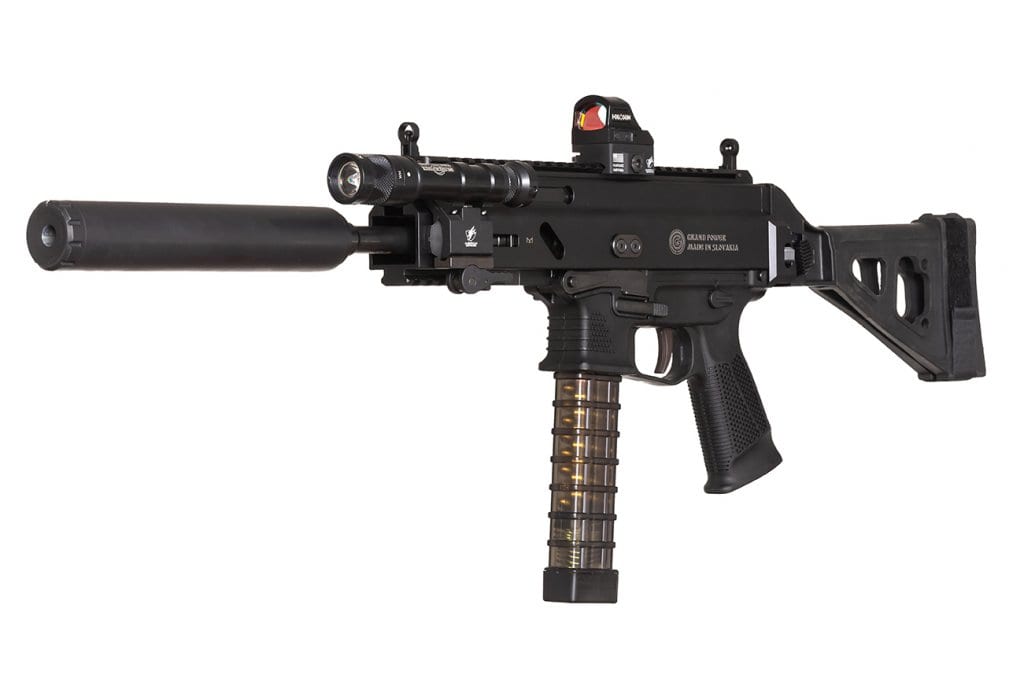 I’m the last guy to tell anyone about “just as good” firearms. I am a true believer in certain brands justifying costs. Especially when they have military contracts and a long lineage in the firearms industry. But this Stribog is like a whole new level of affordable and amazing combined. It almost feels like you got away with something. Like you got that sweet deal from a guy who had no idea what he was selling. Happily, there will be (or should be) no remorse and you may have to buy more than one for fear that the price comes up. Hands down worth every penny, and if you’re not fast roping, room clearing and hostage rescuing as a profession… this quite literally is worth its weight.

If Grand Power and Global Ordnance could foster an aftermarket for this pistol I truly believe this could have an entire subculture of upgrades.

You can learn more about the Stribog at GlobalOrdnance.com. 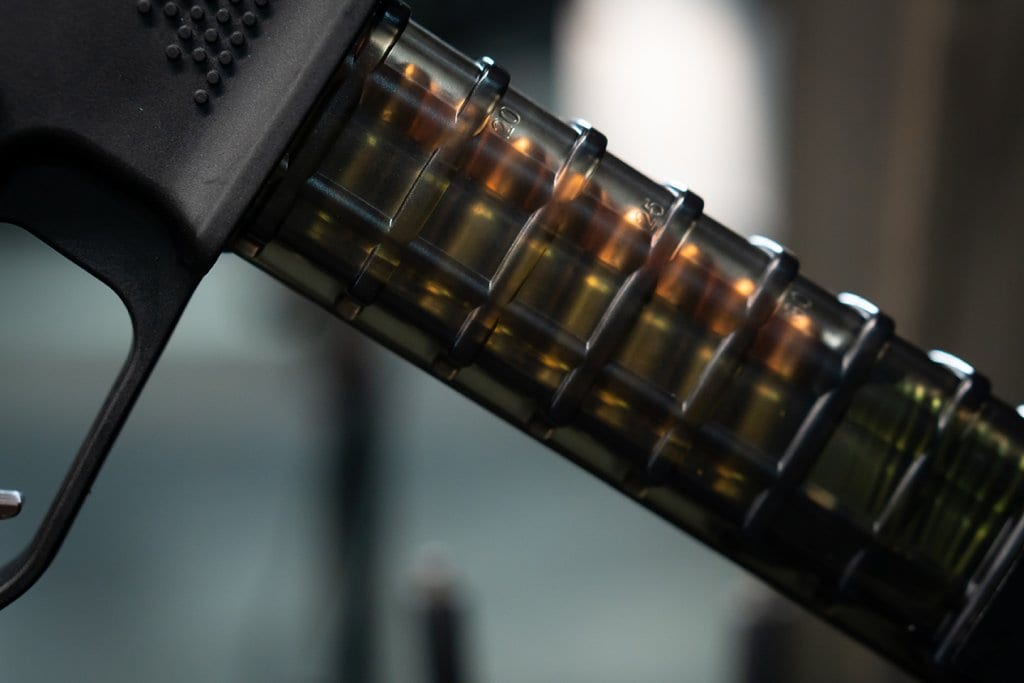 Josh “Whitey” Cast is the dedicated leader of The Mag Life’s creative team and the senior designer at the GunMag Warehouse atelier. In fact, he’s the only designer at the GMW atelier. He’s also a savvy shooter with a gift for conveying information in a way that is easy to understand. When he’s not on the range or in the studio directing traffic along his corpus callosum he can be found making videos for the Four Guns Guns video channel and writing for us.