Sterling Arms International is no stranger to the Canadian firearms market and creating non-restricted guns that can legally be taken anywhere a gun can go. Over the past few years the company has had a few setbacks, with the government prohibiting all of their models. Undeterred, the company continued to chug along, and now they’ve come out with the R-18 MK2. It is one of the nicest AR-180s currently available in Canada.

Let’s dig into the advancements for this platform and what makes this rifle tick. And, of course, we’ll go over our initial impressions.

The R18 Mk2 is a gas piston-operated AR-180 with a rifle-length gas system. The gas system can also be adjusted with the Allen bolt on the front of the gas block.

The piston system is a three-piece gas piston, which, along with the gas blocks being appropriately pinned, means no snapped pistons (yes this is a problem on another design).

The bolt and carrier assembly use stainless guide rods with dual springs and a rubber buffer plate to stop the carrier from battering the receiver.

Takedown is easily done by pressing the cross pin out of the bolt with your hand over the back of the carrier. When you feel the firing pin and spring hit your hand, you can pull these out along with the cam pin on the side. Now you can slide out the bolt itself.

None of these are AR-15 parts. However, the machining is very tidy. Being a gas piston rifle, the receiver stays remarkably clean with only the grease from the piston splattering in the top of the receiver. Much better than carbon crud on all the parts.

On the lower receiver, the rear of the rifle features the growing-in-popularity Picatinny rail stock mounting system. Compared to the pre-production model I used, it has one extra lobe on the rail to allow the stock to mount slightly higher. This design change came about from feedback on initial models that were offered in low quantity for those who just wanted the rifle now. Sterling Arms International has been extremely receptive to constructive criticism, which is refreshing to see.

The lower also holds the two take-down pins like what you would expect on an AR-15.

Speaking of its cousin the AR-15 the R18 Mk2 takes standard AR-15 trigger packs and components. We did get light strikes with hard primers and a very old Trigger Tech Trigger. We spoke with them and they suggested the MCX trigger pack, and since then it has gone bang every time we pull the trigger. If you have a firearm that takes AR triggers and is having light strikes, an extra power hammer spring (if you have a standard trigger), or the MCX Trigger Tech (their hardest-hitting trigger) will likely fix the issue.

We will say the stock trigger was pretty decent for a Mil-Spec style trigger. The lower has an ambidextrous selector switch as well as an ambidextrous bolt release, which is a nice option. Our trigger finger easily hits the right side bolt release, which is situated a bit higher and closer to your hand than the magazine release. Being proper-handed—and by that, we mean a righty with hatred for ambidextrous magazine releases—we were happy to see they decided to not go with an ambi release.

We have seen one reported failure of the adhesive holding this part, but after the 1k plus rounds through ours is still holding firm. We will update you if we have any issues with this down the line. Perhaps peening the edge at the top would ensure it stays put.

The steel charging handle mounts on the left side of the receiver and moves exceptionally smoothly in its groove. It also disengages from the magnet with what I can only describe as an acceptable amount of force. When firing, the magnet holds the charging handle in place.

The rifle has an 18.6″ barrel in order to be non-restricted by Canadian standards. The barrel is a medium-profile barrel with a 1:8 twist due to barrel whip issues with the initial light barrels. This rifle has a flash hider on it that we will eventually replace with a brake of some form.

Our rifle has the full-length handguard on it which means the adjustable gas block is buried a bit under it. however, since it’s not toolless, you won’t be fiddling with it all the time. I only adjusted it initially for the ammo I use and have not had to touch it again.

The handguard on this rifle is proprietary due to the barrel nut design. It has an anti-rotation tab and two bolts mounting it to the barrel nut. And, speaking of the barrel nut, it differs from a standard AR-15 by bolting to the upper receiver instead of threading on.

For furniture, my sample of the Sterling Arms rifle has a Magpul Moe K2 grip and a Zhukov folding stock. Sterling created an adapter for the Zhukov stock so that it mounts to a Picatinny rail. This adapter has a QD sling swivel on each side and mounts firmly to the stock and the rifle. Due to the location of the ejection port, you can’t shoot the rifle with the stock folded to the side.

The rail has a small section of Picatinny at the top front for mounting a front sight or maybe even a laser. The sides and bottom of the handguard have MLOK slots for attaching accessories and QD sling swivel slots are on the left and right sides of the handguard.

We topped the rifle off with an ADM 1.93″ cantilever scope mount with an older Vortex Viper 1-4 that has been damn reliable over the years. We also fashioned an adapter to mount things to the top of the Sterling Arms handguard but we can’t show pictures of it for now. On it, we attached the pressure pad for the Cloud Defensive REIN. Other than wanting to put a brake on the rifle we don’t have any changes we plan for the time being.

Now onto the good part.

How does this rifle perform?

So far we have shot this thing a lot, doing multiple strings of very fast shooting to see how it would handle the buildup in heat. This is a tad harder with 10-round magazines but thankfully the Cross Industries 10/10 magazines make it a bit easier.

We have also tried standard aluminum magazines and the included PMAG with no issues. We have had no issues with ejection, or issues with the gas system to date. As we get more time on the rifle, we will update if we come up with any issues, but so far so good.

Accuracy testing was done with a host of different ammo, resulting in 2-3″ groups at 100 yards shot from a bench off a sandbag.

So far we have been impressed with the rifle. It just works. 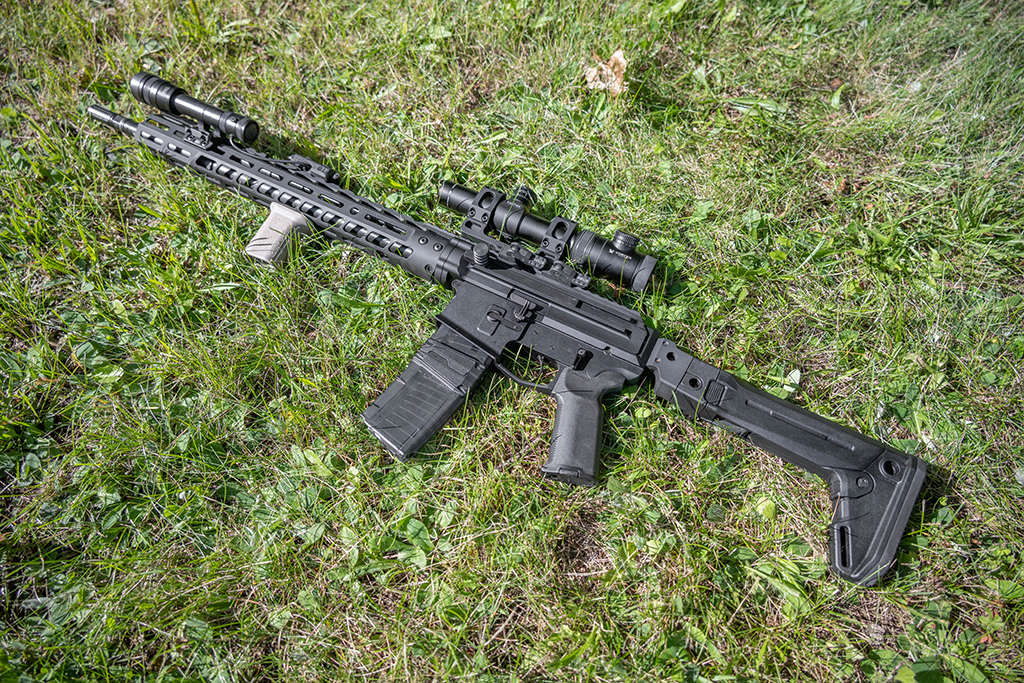 It’s a tad on the heavier side but is better balanced than expected. The adjustability of the Zhukov stock fits the rifle well and means even Behemoth-sized people can use this rifle. The machining and finish of all the parts are top quality and they fit and move smoothly.

We are interested in the future of this rifle and where Sterling Arms International plans on taking it. You can pick one up at The Shooting Edge if you are purchasing online or in-store at Target Sports in Canada. No USA sales currently.