S&W and Crimson Trace Team Up on LiNQ Equipped Rifle 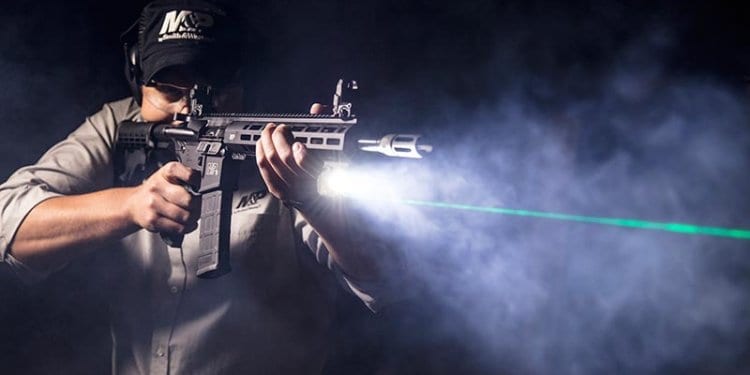 When Smith & Wesson’s parent company, American Outdoor Brands (AOB), acquired Crimson Trace, I suspected that would be a great diversification move for them. However, I also suspected we might see closer collaboration between the sister companies. As I guessed, some of the early partnerships are starting to come to market. One of the first is the new M&P15T with the Crimson Trace LiNQ System.

The LiNQ System is a new wireless white light and green aiming laser unit that is designed for modern sporting rifles like the AR-15. It allows the shooter to mount the light and laser module anywhere on the gun and control it from the pistol grip without the need for running wires and mounting tape switches. In theory, this system could make mounting and running lights and wires with zip ties, Velcro and heavy duty tape a thing of the past.

I am cautiously optimistic about this system. I’ve dealt with too many problems involving near field communication (NFC), Bluetooth and other wireless technologies to be without serious concerns regarding its use on a lifesaving tool like a firearm. However, I have universally had great experiences with Crimson Trace products. Reaching back through my dusty memories, I cannot recall a single instance where a Crimson Trace product failed on me. I cannot say the same about most other manufacturers.

Crimson Trace designed the light with an LED that throws 300 lumens. Lumens are a measure of total light output and tell us nothing about the shape of the beam or reach. That information is not readily available from Crimson Trace. However, I have an M&P15T with the LiNQ System coming for testing, so I should be able to get a feel for what the light is capable of then.

The rifle itself is part of the company’s respected M&P15 line. It is chambered for the 5.56 NATO cartridge and uses a mid-length, direct impingement system with a low profile block. The 16” barrel has a 1:8” twist and is surrounded by a free float handguard that has M-LOK attachment points. It has a 6-position adjustable stock, Magpul MBUS sights, a 30-round Magpul PMAG and weighs less than 7 pounds.

The MSRP is listed as $1,499 with the LiNQ System. Without the rifle, the LiNQ system retails for $649. The standard M&P15T is $1,159 (and that’s with a heavier quadrail and carbine length gas system,) so less than $1500 with the LiNQ seems like a good deal if you plan on adding one anyway.