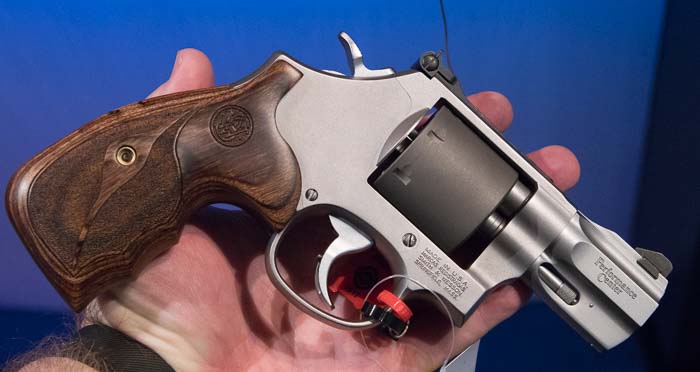 Some of the nicest guns on the market today are being made by the Performance Center at Smith & Wesson. One of the latest offerings is the new S&W 986.
This revolver is a blend of seemingly opposing approaches to gun design. To start with, this wheel gun uses a rimless cartridge: the 9mm. Rimless cartridges are not normally used in a revolver due to the lack of a protruding rim to interface with the cylinder and ejection star.
A non-typical caliber is not the only dichotomy found in the Model 986. The Performance Center uses a 2.5″ barrel (with a recessed precision crown) and reduced the gun’s weight with specific cuts and material use, which would be consistent with a gun aimed at maximum concealment. Yet, the team went with an oversized grip and full-size combat sights — two things not normally associated with a concealment firearm. 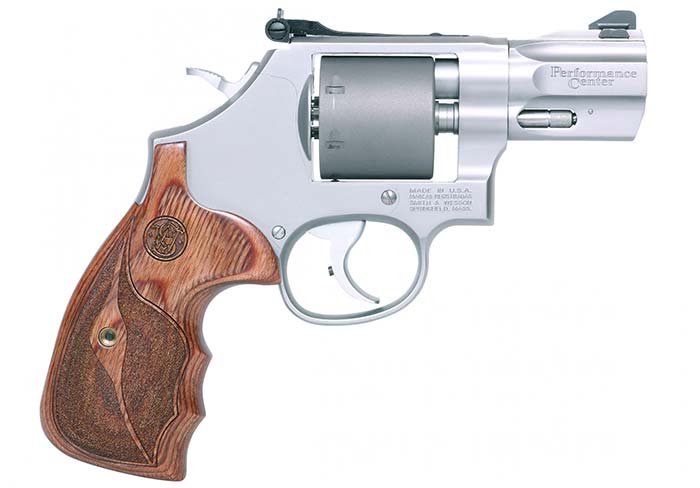 The result is a handgun that balances very well in the hand and is chambered for a serious self-defense cartridge. While not as easy to conceal as a Model 642, the S&W 986 can still be carried under a jacket or shirt with grips that allow very good control of the gun during recoil.
I had a chance to see and shoot one of these at the recent SHOT Show, and I was impressed by it.
I’ve always been intrigued by 9mm revolvers. When I saw that Smith & Wesson would be introducing a new one in 2017, I made it a priority to see it.
My initial impressions are very positive. The S&W 986 looks like a high-end performance gun. The grips are rich wood that set nicely against the matte stainless steel frame. The Performance Center opted for a titanium cylinder that is a darker color that is closer to a light graphite. 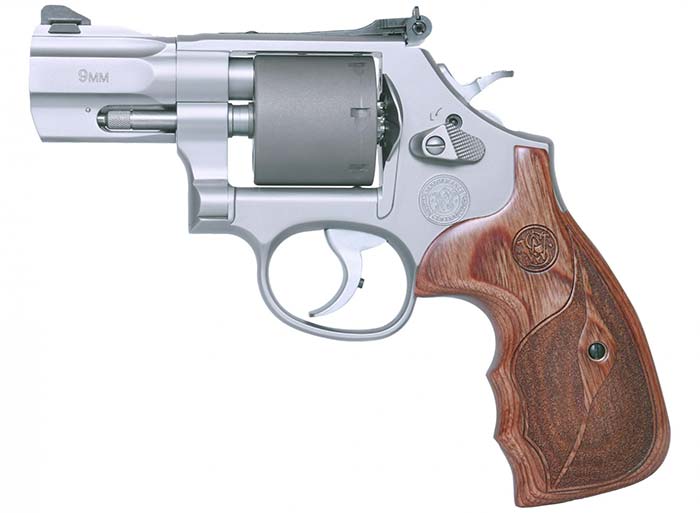 As I mentioned, the gun uses titanium for the cylinder. It is unfluted, and it chambers seven of the 9mm cartridges. As you might expect, it is cut for moon clips. Smith & Wesson includes a pair with each revolver. I would note that buying extra clips is a very smart decision. Clips can be lost or damaged at the range.
The gun weighs a little less than 32 ounces unloaded. To me, that tends to be on the heavy side for a concealment pistol. However, the weight is very well balanced, and it feels much lighter when holding it.
Recoil from a 9mm revolver can be stout in small guns. To give this statement some context, SAAMI specifications on 9mm +P ammunition puts it in the same ballpark as the .357 Magnum.
Surprisingly, the recoil on the Model 986 was closer to that of a .38 Special and not its Magnum brother. Muzzle rise was easy to control thanks to the full-size grip. Also, there was no sting to the hand as you might get from a J-frame.
These guns have the actions tuned by the Performance Center. While the double-action trigger is not the nicest I’ve felt (that’s a toss-up between my 20-year-old Model 10 and a friend’s Colt Python), it is very good and well worth the investment. The single-action trigger is light and crisp – on par with the venerable Python.
Anything coming out of the Performance Center is a step above the typical (good quality) Smith & Wesson catalog. As with anything else in life, you have to pay for the added work and tuning. The S&W 986 carries a suggested retail price of $1,129. Considering all of the additional work done on these guns, the price is quite reasonable.
Read more at Smith & Wesson.