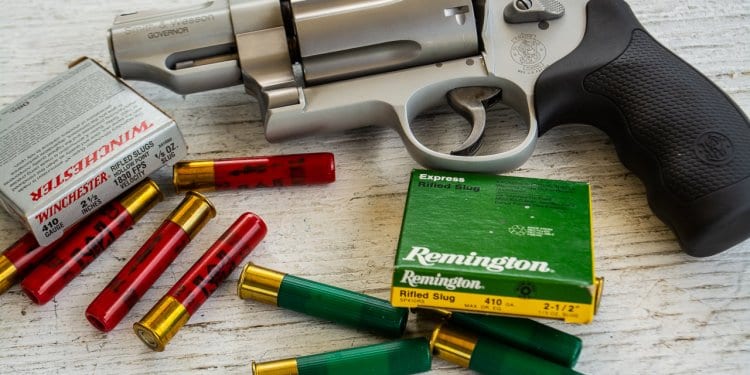 Hand-held shotguns are odd ducks. Can I say that? Actually, I can’t because, at least according to the Bureau of Alcohol, Tobacco, and firearms they’re not shotguns at all but rather handguns.

Here’s the distinction. Shotguns by legal definition have a smooth bore. They are also required by law to have barrels of at least 18 inches in length. The reason that revolvers like the Smith & Wesson Governor and Taurus Judge legally exist is that they have rifled barrels. And that’s what leads to the question of the day. Can they really shoot both shotshells and standard cartridges?

Technically the answer is yes. To see if they can do it well I’ve been testing a Smith & Wesson Governor with shotshells, .410 slugs, .45 ACP, AND .45 Colt ammunition. Here’s the skinny. 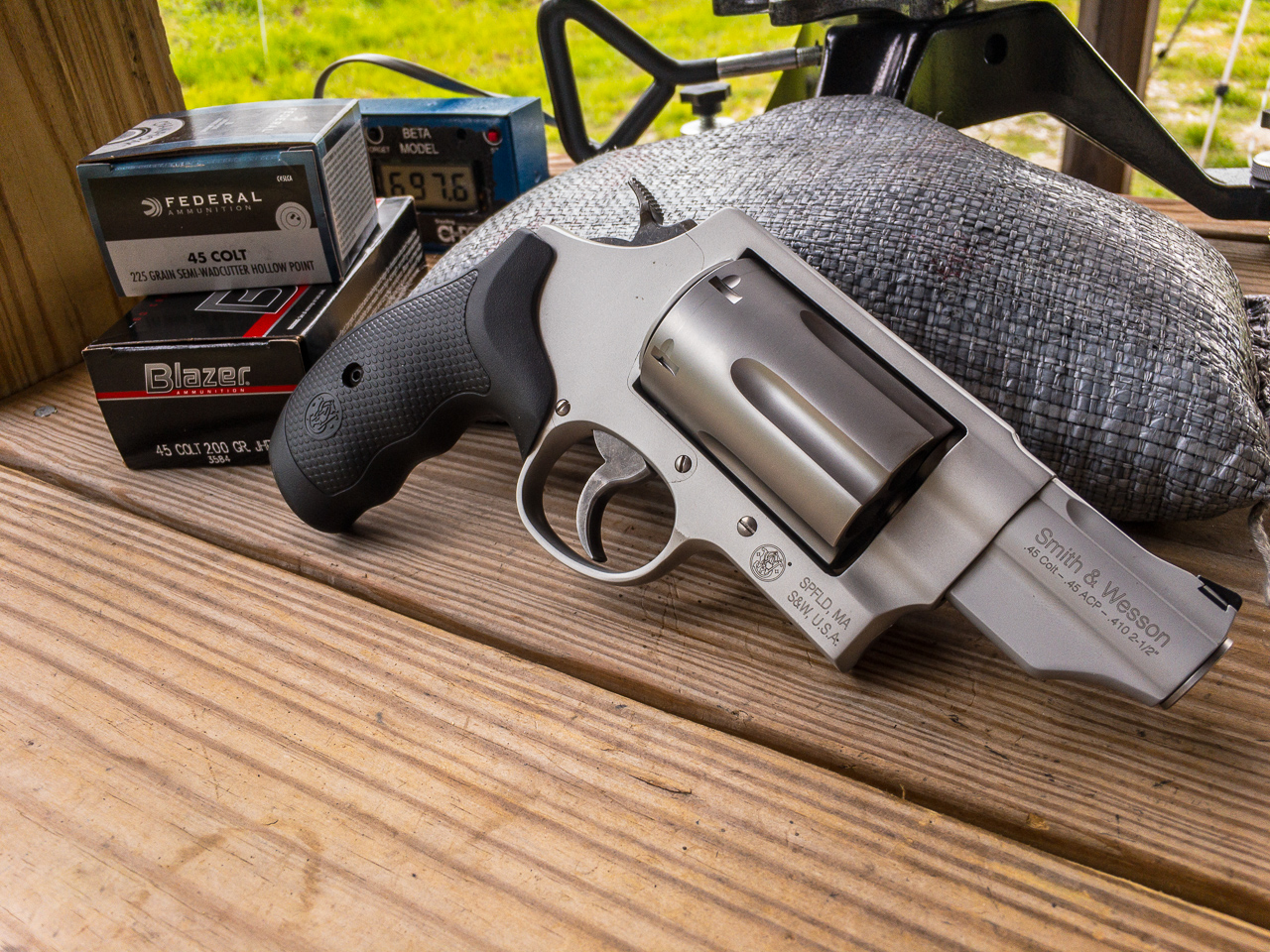 I did some accuracy testing from 25 yards with .45 Colt and .45 ACP ammo. The results were… interesting.

Let’s start with shotshells. The rifling does a masterful job of flinging shot much like those old-school rotary lawn sprinklers. With both #7 ½ and #8 shot sizes, I could reliably break clay targets out to about 10 yards. At 15 yards, I might get lucky and punch a couple of pellets through the clay, but I rarely broke one.

OK. So, shot-shells are a close range thing. What about .410 slugs? I tried both Winchester and Remington 1/5-ounce rifled slugs from 25 yards. The five-shot groups mostly stayed within a foot. Yes, 12 inches.

On to bullets. I set up my sandbags and torched off some Federal 225-grain semi-wadcutter and Blazer 200-grain JHPs. Accuracy improved, at least compared to the .410 slugs. The Blazer JHPs averaged 5.6-inch five-shot groups from 25 yards while the Federal semi-wadcutters landed within 6.3-inch patterns. In fairness, that’s acceptable self-defense accuracy considering ranges are statistically much shorter, but nearly any decent revolver or pistol will halve the size of those groups with ease. 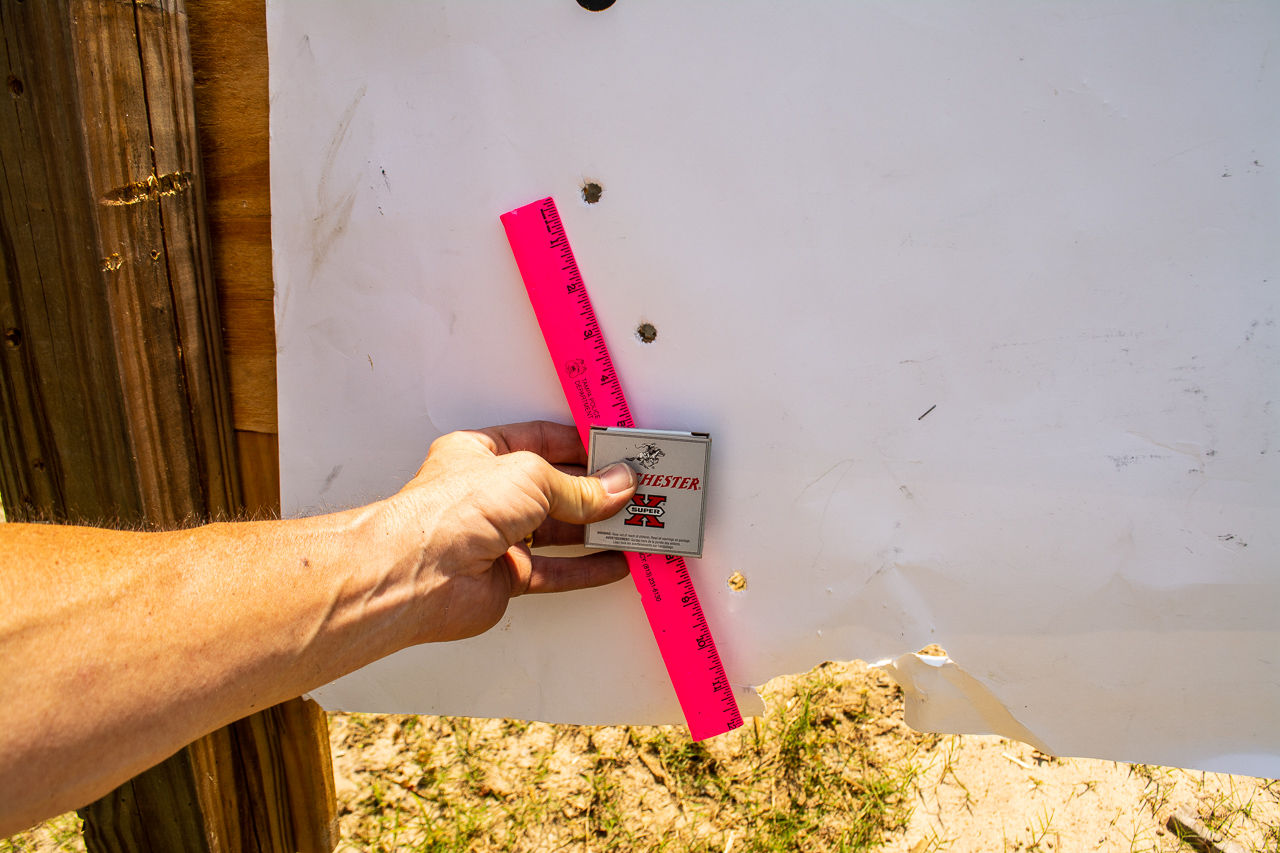 The Governor wasn’t enamored with .410 slugs. A couple of them went below this target.

As it turns out this revolver can also fire .45 ACP cartridges if you use the included moon clips. I fired some groups with the new American Eagle Syntech TSJ 220-grain ammo and averaged about 7.5 inches for five shots from 25 yards. Again, that’ll get the job done, but it doesn’t stack up to dedicated .45 pistols or revolvers.

The net-net? It’s a great snake gun. As for home or self-defense, it’s not blowing up my tactical kilt. It’s interesting. It’s fun. It has some practical applications. But it also might be the victim of trying to do too many things. You know what they say. The Jack of all trades is often the master of none.

If you’re interested in more, check out RF’s review on TTAG. You might also read Grossman’s comparison of the Governor and the Taurus Judge on PDW.