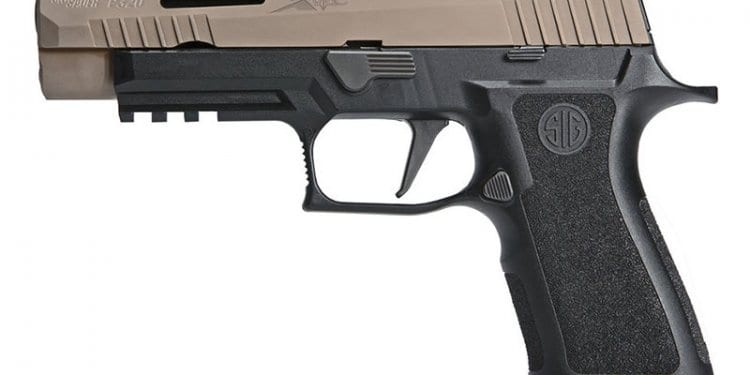 If you were to survey gun dealers about the hottest handguns on the market right now, there is a good chance the P320 modular pistol from SIG SAUER would be the one that is at the top of the list.

It makes a lot of sense. Back in January, the United States Army named the P320 as its next generation handgun. Since then, there have been other announcements of law enforcement agencies swapping over to the guns. The sheriff’s office in my county recently made the switch and my former police department just transitioned over as well.

When shooters see the US military and law enforcement officers moving to the guns, quite a few of them will be interested to try them out as well.

While I don’t think the guns are perfect, I do think they have a lot going for them. I can definitely understand the appeal of the gun. The guns are modular, allowing for all manner of changes and customizations without the need for another FFL fee.

Capitalizing on the rising popularity of the guns, SIG SAUER and Viking Tactics collaborated on a new pistol called the P320 X-VTAC. The new guns are being offered exclusively through Talo Distributors, and they should be available in the next few weeks.

The P320 X-VTAC pistols feature a number of changes from the basic P320 pistol that might be of interest. SIG SAUER uses its X-series polymer frame on these guns. The X-series frame includes an accessory rail under the barrel, an undercut behind the trigger guard and an extended beavertail.

The slide has a number of custom cuts including enhanced forward serrations and cuts to reduce the weight. Dovetailed into the top of the slide are the Day/Night sights developed by VTAC. These sights use fiber optic pipes that are positioned high on the sight with tritium vials underneath. The idea is to have two reference points in each sight such that one will always be useful no matter what the lighting conditions are.

SIG replaced the standard trigger with a flat faced one that is said to provide a cleaner break for improved accuracy. These guns has a suggested retail price of $918, and will ship with three 17-round magazines.