Covid-19 casualties now include SHOT Show 2021, as I’m sure most of you know. As much as I would’ve loved to wander the halls of SHOT, gazing at the wonders the industry has to offer as a boomer with a cart took my ankle out once more, alas I could not.

There I was scrolling through press releases, the NSSF website, and beyond to see what’s new. SHOT Show 2021 Might have been canceled, but companies still were pushing their new products. Sadly, it was mostly in an unorganized and hard to track manner. Luckily, my hours of eye drying scrolling found plenty of new products, and here are my picks for SHOT Show 2021.

There are three types of responses when people see the KelTec P50. The first is typically an, “Okay that’s neat,” and those people move on. The second reaction is, “That’s stupid, it’s useless and so untactical you get a -2 to your tactical skills.”

The third type of response comes from idiots like me who say, “That’s so weird, and I love it.” I love the weirdness KelTec embraces and produces in their long guns and their newer handguns. Every year, KelTec seems to have a newer and weirder gun to drop at SHOT Show.

I get it—it’s not super useful. However, there are already hundreds if not thousands of useful, tactical guns for you to purchase. Let weirdos appreciate the weird. As far as SHOT Show 2021, this might be the weirdest of guns.

The P50 is a pistol that’s subgun in design, chambered in 5.7 x 28mm, and uses FN P90 magazines. These 50 round weirdos are already an interesting choice, and the fact that the gun hinges open to enclose the 50 round magazine makes it even better. This weird clamshell design is neat and looks like it saves room and simplifies the design.

Sadly there doesn’t seem to be an easy way to add a brace or a stock should you SBR this weirdo. However, the aftermarket tends to embrace KelTec firearms, and we might see a way yet.

The KelTec P50 is one of the neatest new guns on the market and is one more gun in the small stable of 5.7x28mm guns. Knowing KelTec, it will likely be an affordable little gun that is bound to be a good bit of fun.

If only 5.7 ammo was easy to find and affordable at the moment. I really wanna do an akimbo Buck Rogers with two of these bad boys.

Way back when Magpul showed off a prototype folding pistol/SBR/SMG and the internet loved it. Of course, the prototype never took off, and for the last 13 years or so, we’ve not heard a drop of information.

Then, BAM—Not SHOT Show 2021 happens. Magpul gave us nearly a dozen different new releases, and one of them was the announcement that Magpul and ZEV began working with ZEV’s OZ9 modular pistol to create a production model FDP-9 and FDC-9.

Magpul and ZEV released lots of pictures of the FDC-9, which is an SBR and requires the tax stamp and all that fun stuff. No pictures or details have been released on the FDP, but I’m hoping it’s just a stockless FDC-9. 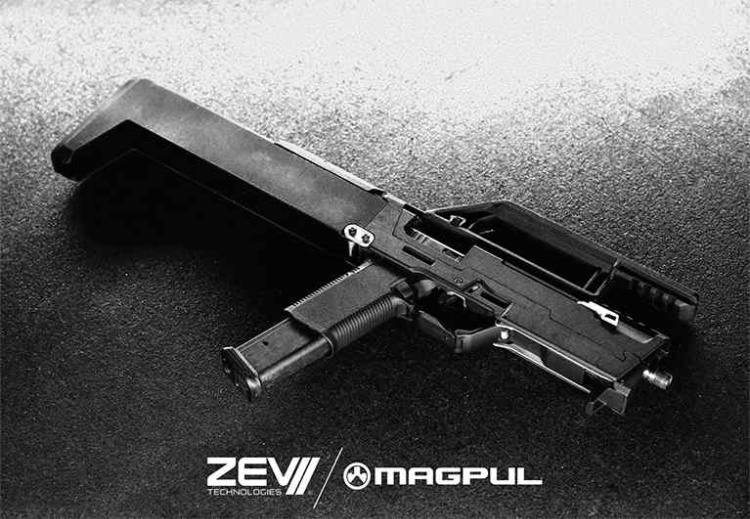 I’m glad Magpul is finally making it, and I hope the FDC-9 delivers as a non-tax stamp version of this bad boy. Sadly these won’t hit the market until next year at the earliest, and like most things announced at the SHOT Show, take that date with a grain of salt. Oh, but it does take Glock magazines.

Small guns didn’t get a ton of light love. We have the 100-lumen TLR 6, the miserable Olight Mini Valkyrie, and the expensive and Surefire XSC. The new TLR 7 Sub seems to be bringing a powerful mini light to the subcompact market.

The Streamlight TLR 7 Sub is designed for subcompact firearms like the Glock 48 Rail model, the Hellcat, and the P365 XL with an adapter.

The TLR 7 Sub will outperform most lights in this size range with ease. The light packs 500 lumens backed by 5,000 candelas to give you quite a bit of light for a subcompact pistol.

It outperforms all the current subcompact pistol lights and will likely do so at an affordable price point. I can’t wait to get my hands on the TLR 7 Sub.

If you’re interested in seeing what else they brought to Not SHOT, check out how Streamlight is Making Moves in 2021—5 Lights of SHOT.

A new company called Tactaload was primed for their first SHOT Show, and unfortunately, SHOT Show 2021 died of Covid.

Tactaload’s first product is the Flash 5 stock. The Flash 5 is a Remington 870 and Mossberg 500 stock that has an integral magazine that holds five rounds of shotgun ammunition. The Flash 5 builds on the Speed Feedstock idea while completely revolutionizing it.

I was lucky enough to get a Flash 5 shotgun stock. I’ve been using it for a couple of weeks now and loving it. It’s easy to install, has an adjustable LOP, and makes reloading rapid. In fact, it seems to be as fast or even faster than a side-saddle. 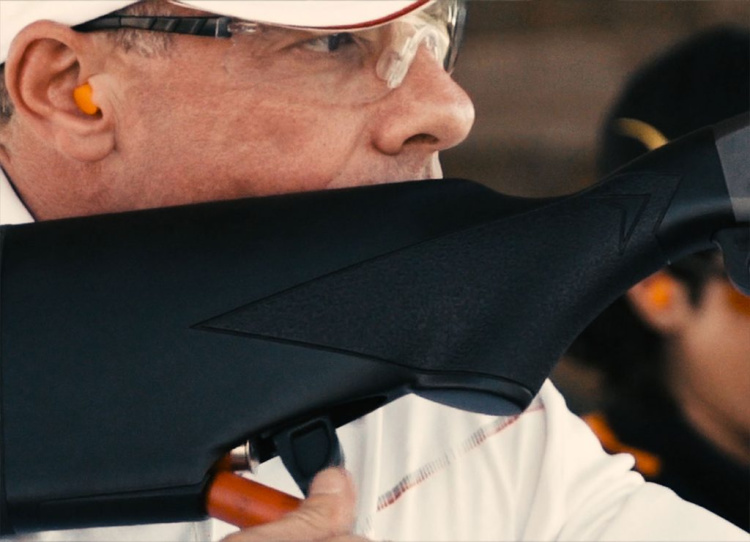 Unlike a side-saddle, it’s ambidextrous, doesn’t increase the bulk of your shotgun, and is super robust.

The P365 is my daily carry gun. I’ve been carrying it for years. I think it’s one of the best carry guns on the market. I’m pleased to see it getting the full Gucci treatment from ZEV.

The Z365 and Z365XL are outfitted with expanded and aggressive slide serrations, a grey slate finish, an optics cut, and a set of high visibility sights.

The ZEV optic’s cut is compatible with all the little optics out there, including the Shield, the SIG, and Holosun varieties. The Octane Z365 and Z365Xl also feature an aggressively designed grip module that offers Zev’s diamond pattern grip as well as their Pro Barrel and flat-faced trigger.

There are a few things I really like about these guns and one thing I don’t like. I like the finish and the additional aggressive slide serrations. I love that the optic’s cut plate is not part of the rear sight.

The P365XL’s optic cut requires you to remove the rear sight to mount an optic. The Octane Z365 and Z365XL’s grip texture is much more aggressive, and the flat-faced trigger is a more ergonomic option.

What I don’t like is the 1,300 dollar price tag. That’s a tough sell for a carry gun. I hope the slide will be sold separately because I do like having a fixed rear sight.

If SHOT Show 2021 had gone on like normal, maybe I could have gotten my hands on one and actually fired it. That might change my mind on the price tag, but for now, it seems like a tough sell.

I love Prism optics, specifically low powered, magnified prism optics. The downside is they are usually larger and heavier than red dots. Primary Arms seems to be addressing that issue with their new SLX 3X Microprism optic.

There is also a 1X Microprism, but that’s less impressive to me. These two bad boys showed up in Primary Arm’s latest catalog but undoubtedly would have been at SHOT Show 2021.

Prisms give me enough magnification for typical carbine ranges out to 300 yards, and the prism design is still easy to use at close range with a two-eyed open, split focus shooting style. It works, and Prisms are typically lighter and smaller than variable optics.

Prisms are simplistic and have few points of failure compared to LPVOs, and that typically makes them tougher.

The SLX 3X Microprism optic is only 2.95 inches long and weighs 8 ounces total. This tiny thing gives you the famed ACSS Raptor reticle. I wish the new ACSS 9mm reticle would be tossed in the 3X model, but alas, it’s reserved for the 1X model only.

The 3X Microprism’s small size makes it instantly appealing for small, lightweight rifles, like PCCs. However, the ACSS Raptor reticle is still pretty freaking great, and the super small size and weight of these optics make them super attractive.

The Micro prism line also has various mount options that allow you to mount it at tons of various heights. From 1.1 inches to 2.075 inches.

A super small, lightweight, and modular prism sight with a teeny tiny footprint and 3 power magnification is an easy sell to me. Primary Arms also makes good stuff, and I’m a fan. I’m gonna get my greedy little mitts on one of these as soon as I can.

The Armscor VR series of box fed shotguns and I go way back. I love these shotguns and find them to be awesome and fun tools. My favorite of the three semi-auto models was the VR 80. I was instantly engaged when the VR 82 popped up via press release in my email.

This is a 20 gauge variant of the VR 80. The VR 80 is an AR-type shotgun with AR-like configuration and control and was even compatible with AR-style furniture.

The V82 keeps the same desirable features as the VR 80. This includes compatibility with AR stocks and pistol grips, magazine capacities ranging from 5 to 20, and the same ambidextrous controls and design.

At the same time, it looks like it’s lightweight, a little shorter, and without a doubt, it will be a softer recoiling weapon.

The VR 80 was already super comfortable to shoot, and the VR82 is bound to be even easier to handle. I like tube-fed guns, but a 20 gauge semi-auto shotgun with a 10 round magazine would be one helluva awesome home defense gun for smaller shooters.

The SHOT Show 2021 range day would have been a blast with some VR82 trigger time. Alas, all we can do is wait and see.

The Future of SHOT

Hopefully, next year we can bring you all the information straight from the floor of SHOT Show. I look forward to walking the aisles with blood-red eyes, a miserable hangover, and sore feet. Until then, it seems like we will continue to monitor the unorganized and poorly made NSSF website and inboxes, letting us know what’s new and when it’s coming.