The next generation Hannibal Rail from Samson Manufacturing is optics ready and includes hardware and mounting pins for a variety of optic footprints.

Samson stated that as of April 1, 2022, the Hannibal Rail is offered in two iterations. One fits 2008 and later Mini-14/Mini Thirty, the other fits 2007 and earlier Mini-14. Both iterations are available in a choice of matte black or natural gray finishes. Refer to the Ruger serial number lookup on their website if you are unsure what year your rifle was manufactured. It is very important that the correct combination of Hannibal Rail and barrel type is used.

To help select the correct model:

Samson also notes that there are a very large number of micro red dot optics currently available on the market, and more may be released in the near future. It is therefore impossible to guarantee that every single optic will be compatible with the new model Hannibal Rails. They have a qualified customer service team to help answer questions regarding specific optics and their rail options.

Another suggestion (this one from GunMag Warehouse) would be to put a 45-degree offset mount on there so you have a place for an inexpensive weapon light (like the ones below;  👉 the image). 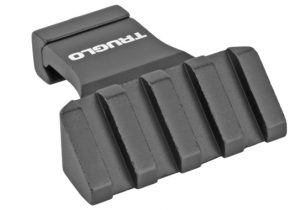 Included in the Box