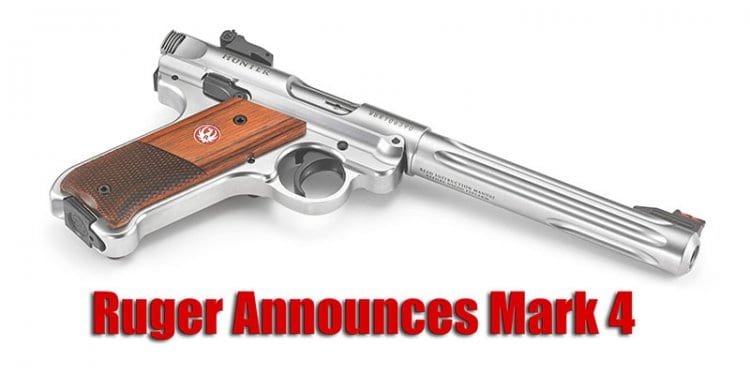 Unless you’ve been living under a rock for the past 70 years, you’ve see, shot or know of the Ruger MK series of rimfire pistols. The brainchild of the late, great Bill Ruger, this Nambu-influenced plinking pistol is among the most prolific in the world and its success enabled Ruger to become the massive company it is today. 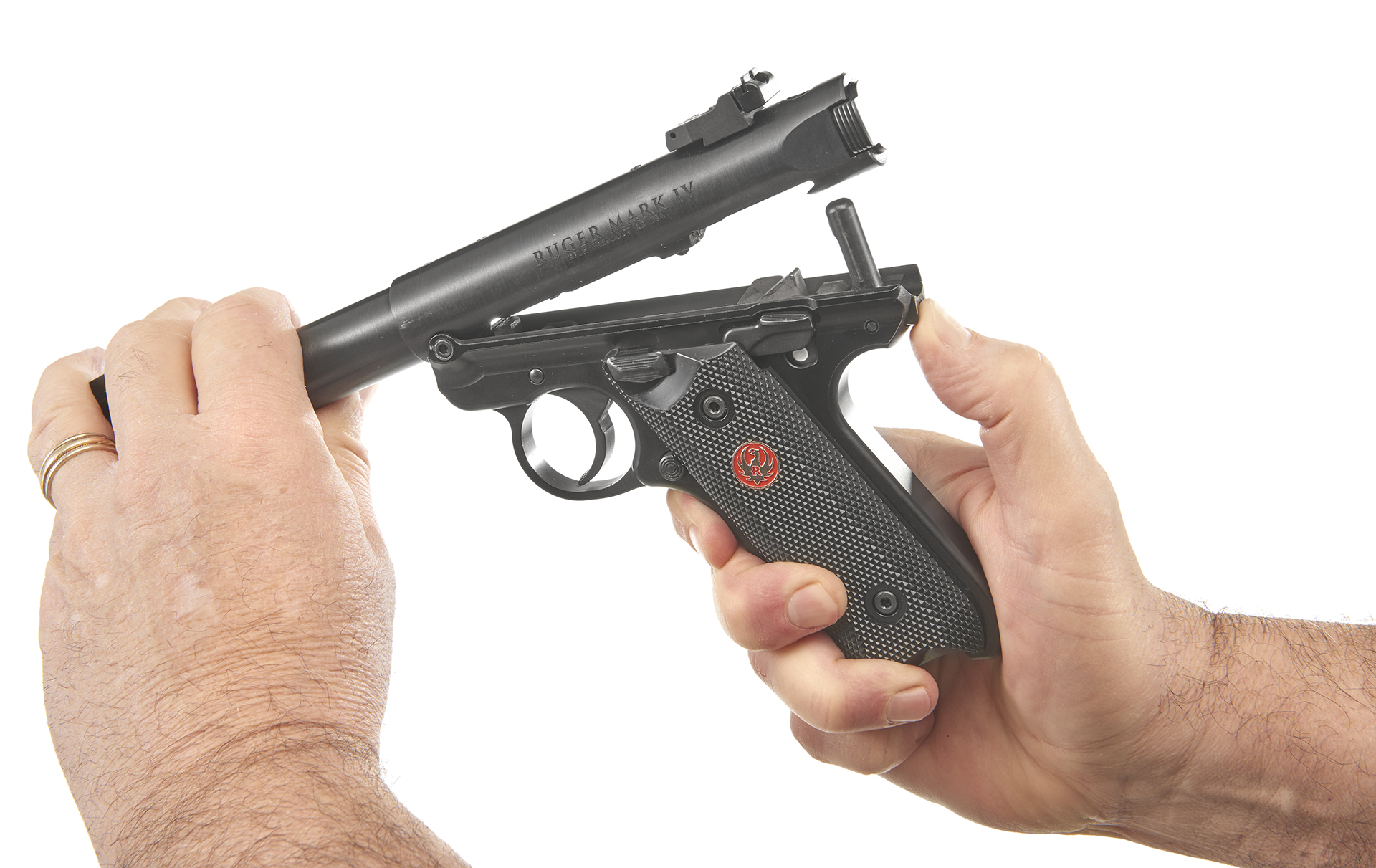 Ruger’s little handgun is a direct blow-back pistol that closely mimics the grip angle of the German P08 handgun of the first world war or the 1911 depending on the model. The gun has evolved three times since its introduction in 1949 as the Ruger Standard Model. Originally feeding from detachable 9-round, single-stack magazines, Ruger increased their capacity to 10 rounds in later iterations.

The pistol has seen action not just at home dealing with paper adversaries, but also as an integrally-suppressed tool for covert military operations as far back as Vietnam. The MKII and III models added more variants with different barrel profiles and grip styles, but the internals have always remained more or less the same – a stamped steel, inexpensive target pistol for the average consumer.  But this classic plinker has one downside to its design: disassembly.

Tearing down the Ruger requires three hands and a screwdriver unless the gun has been taken apart multiple times. Because of this, new shooters (one of the target demographics of the gun) would struggle with basic maintained of the pistol. Which has evolved in several people learning to clean their Ruger pistol without taking it apart – if they clean it at all.  Ruger has finally addressed this in their latest iteration of the MK series, the Mark IV.

“While the heavily redesigned Mark IV maintains the same classic outward appearance as the Mark III, it incorporates a significant improvement customers will love – a simple, one-button takedown for quick and easy field-stripping. A recessed button in the back of the frame allows the upper receiver to tilt up and off of the grip frame without the use of tools. The bolt simply slides out of the receiver and the barrel can be properly cleaned from chamber to muzzle. “

Though the engineers at Ruger weren’t content to simply change the takedown procedure to resemble that of a scaled-down AR15, but also they’ve replaced the steel stamping construction of the lower receiver with machined aluminum and improved the ergonomics. 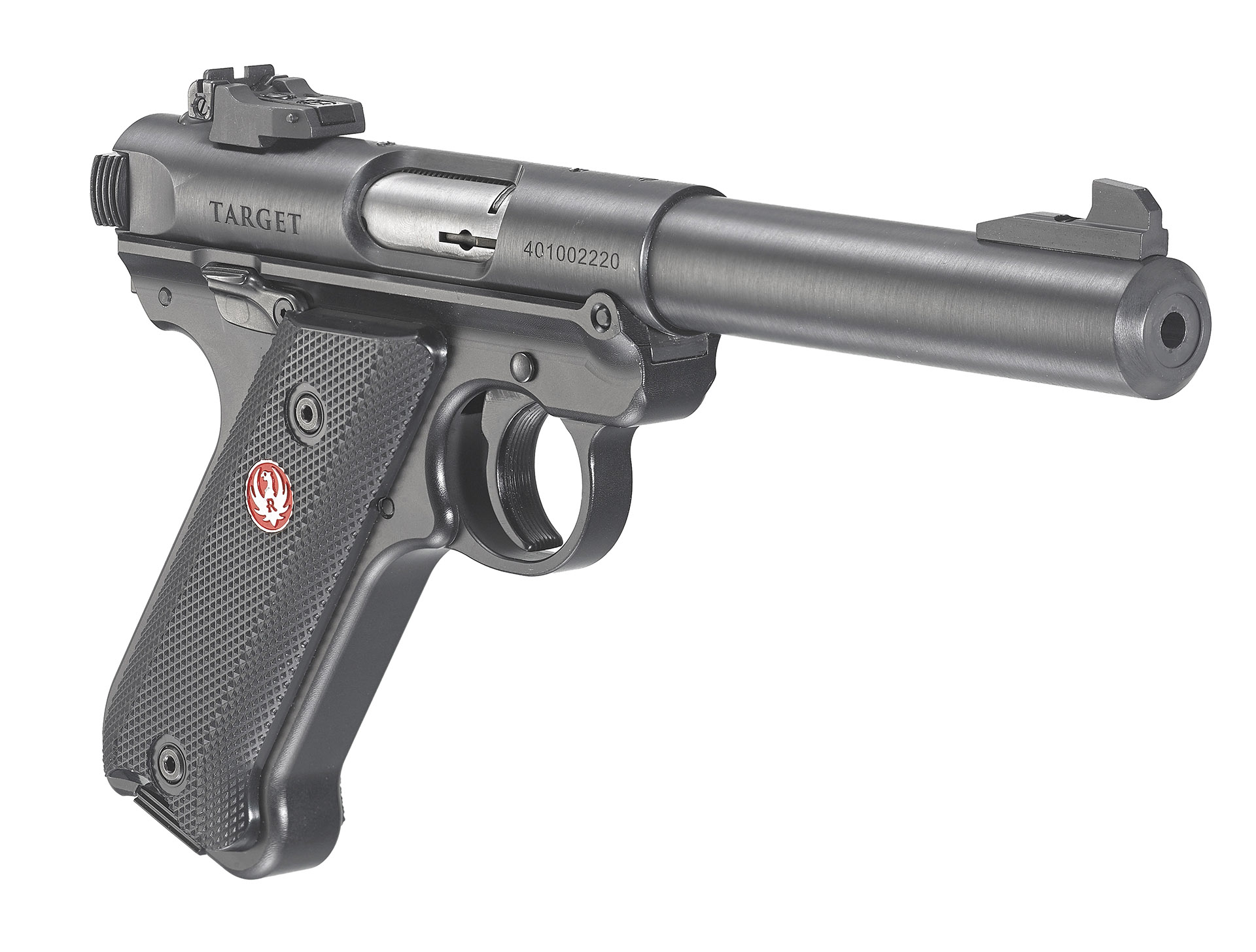 “Other significant improvements include a one-piece grip frame that is precision CNC-machined from a solid piece of stainless steel or aluminum; an ambidextrous manual safety and a redesigned bolt stop for more ergonomic operation. The magazine drops free on release for faster reloads and a redesigned magazine disconnect safety prevents discharge when the magazine has been removed.  Internal improvements include changes to the hammer, sear, bolt and firing pin for smoother, more reliable feeding.”

Ruger hasn’t forgotten what makes the gun great, and like all the previous Mark series of handguns, retaining some backwards compatibility with components designed for previous versions of the gun.

“The Mark IV is compatible with a variety of Mark III aftermarket accessories including sights, scope bases and magazines.”

Ruger stated that these new plinkers should be shipping to retailers soon, and will initially be available in blued and stainless and initially only heavy target variations.