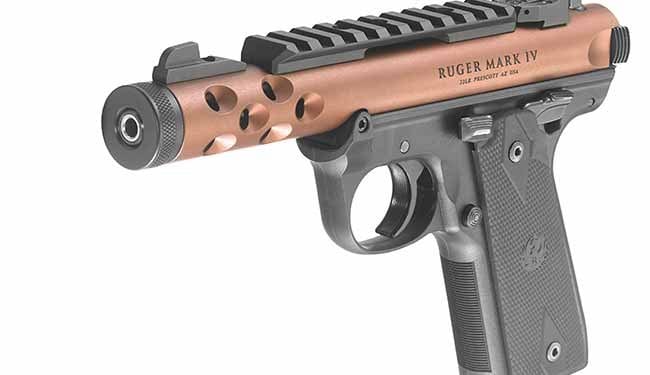 Sturm, Ruger & Co. announced an addition to the company’s recently launched Mark IV line of .22 LR pistols. The new Mark IV 22/45 Lite handgun follows in the footsteps of the previous 22/45 Lite pistols, but takes advantage of all of the features found in the new pistol platform.

The Mark IV 22/45 Lite has a grip frame similar to the shape and size of the classic 1911 pistol. Many people believe the 1911 introduced the best grip angle and size of its time and has never been surpassed.

One of the key features of the Mark IV pistols, and one that is also found on the new 22/45 Lite, is the simple takedown procedure that uses a single button. Prior generation pistols required a bit of effort in a somewhat cumbersome process that many shooters disliked. The new system, however, is extremely easy.

To field strip the Mark IV, all you have to do is press a button on the rear of the gun. This will allow the upper assembly to open and tilt on a forward pivot pin and the bolt can be slide out of the upper. If this sounds like the same way you might remove the bolt carrier group on an AR-style rifle, you are right on the money. In my mind, this is a vast improvement over the older Mark III and previous pistols. 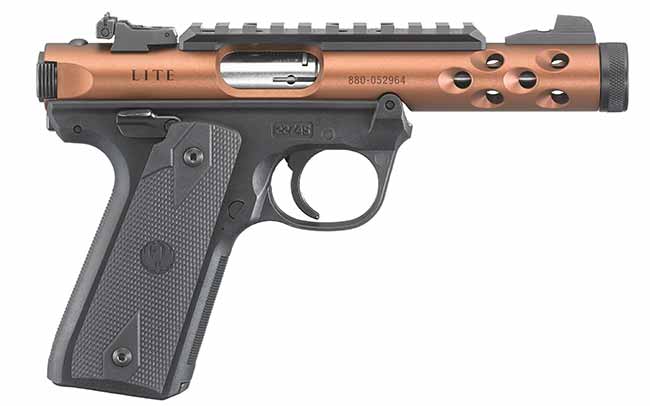 Ruger includes target style adjustable sights on the gun as well as a length of Picatinny rail for the easy addition of an optic.

The standard barrel is 4.4” long and is threaded for the addition of a sound suppressor or other muzzle device. A thread protecting cap is, of course, included with the gun.

Ruger ships these guns with two 10-round magazines. Since magazines are frequently the source of semi-automatic pistol malfunctions, I always recommend picking up at least two or three more to ensure you are never without a working ammunition feeder. Good news: older Mark III magazines are 100% compatible with the Mark IV guns.

The appearance of the 22/45 Lite is fairly striking. Ruger opted for a bronze anodized finish to really make it stand out in your gun safe. Additionally, the barrel shroud has ventilation holes that give it a race or perhaps sci-fi look.

The new guns have a suggested retail price of $559 and are available immediately.