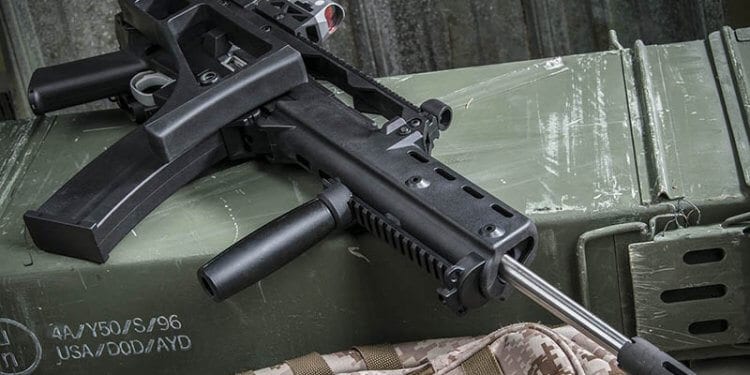 For years gun writers, forum-posters and gun shop clerks alike have almost universally recommended the 10/22 as a new shooter’s first rifle. Their reasoning was sound back when .22LR ammo was cheap and plentiful, but what about now?

With steel-cased .223/5.56mm at roughly 22 cents a round when purchased by the case, and .22lr at about a third of that – the economics aren’t hard to justify for shooters who love putting lead down range any chance they get.

Though even as recently as last year, the price and availability of .22lr made purchasing a .22 rifle a tough sell over an AR15 or AKM carbine. While both of these military-inspired firearms are great tools, they’re much more expensive than the average 10/22 and can’t be used at many indoor or close-range shooting ranges. Areas ideal for new shooters to learn the core skills of marksmanship.

Skills like sight alignment, trigger control and follow-through – the kind that require hundreds if not thousands of repetitions to ingrain in a shooter’s brain. Obviously the reduced cost per round greatly assists the affordability of doing this, but the trade-off is that the reduced recoil doesn’t prepare shooters to deal with it on larger caliber firearms.

But this article isn’t simply about justifying the purchase of a .22lr carbine over a center-fire model, it’s about the Ruger 10/22 specifically. So, what is the Ruger 10/22?

It’s a semi-automatic, magazine-fed direct-blowback rifle chambered in .22lr. The 10/22 is available from Ruger in roughly a dozen configurations that differ in finish, stock material, barrel length/type and included accessories. Some 10/22s now ship with threaded barrels so they can accept muzzle devices like compensators and sound suppressors.

With prices on AR15 carbines dropping to record levels as the market becomes ultra-saturated with them, should the average shooter forego the rimfire Ruger in favor of an AR15?

Not necessarily. While not suitable for home defense or three-gun competitions, the 10/22 is an excellent rifle not just for beginners, but also tinkerers. The Ruger 10/22 is the most prolific rimfire carbine in the United States, and as a result has dauntingly-large aftermarket support. Some companies even make complete receivers for shooters to build their ideal gun from. Conservable, given all the different parts available, I would estimate there are over 1,000,000 different configurations for the gun.

More than that, it means the gun can grow with you as a shooter. Which is why the folks at the Appleseed clinics recommend a Tech Sights-equipped 10/22 for their students to learn the fundamentals of marksmanship.

More than that, there are advantages to owning one of these little guns over an AR15, like the ability to hunt small game. Animals like squirrels and rabbits are easy prey for the soft-shooting automatic, making it a great hiking or bugout gun. This is especially true given how lightweight both the ammo and the rifle are.

It may not be as tacticool as an AR15 or AKM carbine, but the little Ruger still has a part to play in a shooter’s collection. It’s often thought of as simply a starter gun, but the Ruger 10/22’s endless array of aftermarket parts, simple-design and rugged construction make it a great choice for any shooter in need of a quality firearm.

Check out the Ruger 10/22 magazine selection at GunMag Warehouse.