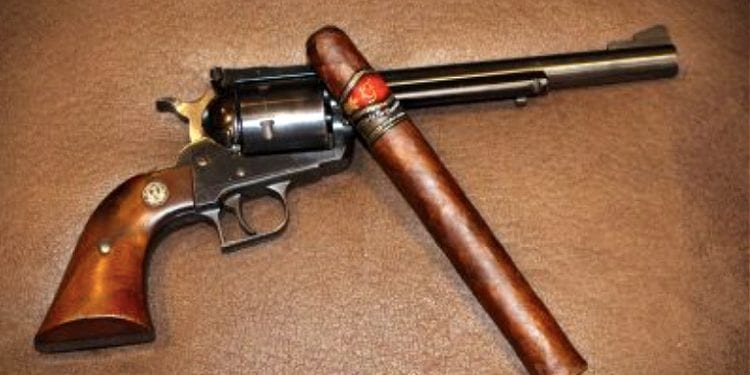 The Ruger Super Blackhawk is a beast of a revolver. It is extremely reliable, overbuilt, and is a true powerhouse of a six-shooter. The Super Blackhawk is one of the top choices for a hunting and bear-country handgun. It’s big, bold, and deserves to be paired with a cigar with the same characteristics, like the La Flor Dominicana Double Ligero.

Ruger introduced the 44 Magnum Super Blackhawk in 1956. That same year, Smith and Wesson was in development of the new 44 Mag cartridge. Ruger, after Smith, was the first company to introduce a revolver in the hot new cartridge. According to legend, Ruger was able to get the Super Blackhawk on the market so soon after Smith due to an employee finding spent 44 Mag cases in a scrap pile. 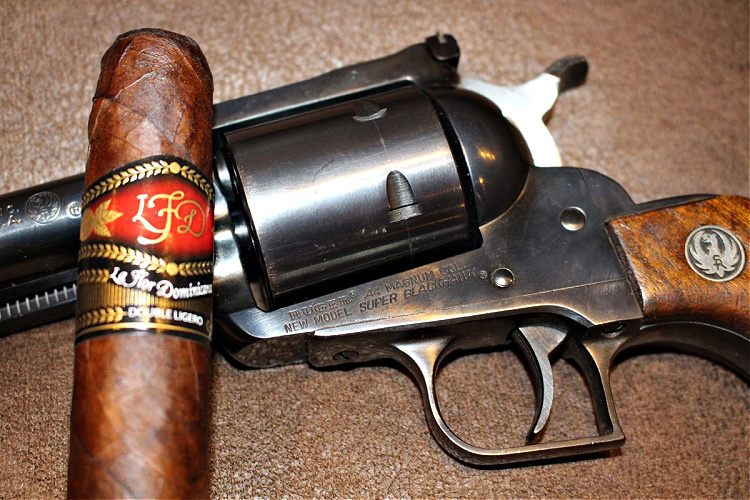 Both the cigar and the gun are overbuilt and bold.

The Super Blackhawk is overbuilt, so much so that they are able to fire handloads that have almost double the muzzle energy than factory ammunition. Of course, the recoil is going to be brutal with these super hot loads. But with all that energy, they make excellent hunting revolvers. With the proper load and bullet selection, the Super Blackhawk is capable of taking game, ranging from deer to grizzly and even buffalo.

What is the difference between a Ruger Blackhawk and Super Blackhawk?

The Ruger Blackhawk was originally designed to be a modern version of the Colt Single Action Army with an improved mechanism. and using modern manufacturing techniques and materials to produce a better (mechanically speaking) gun. The use of aluminum for the grip frame was to make for a nearly perfectly balanced gun in a 4&5/8th-inch barrel.

When the 44 Magnum came along they made some obvious changes to handle the pressures the gun would produce like an unfluted cylinder (to add weight and strength) and also a longer barrel in most cases. The [Super Blackhawk] steel frame was stronger and helped balance out the longer barrel. The longer handle gave more purchase on the grip so you could have a full hand hold instead of wrapping your pinkie around the butt. This was certainly needed with the 44 Magnum which was at the time the most powerful (production) handgun in the world. 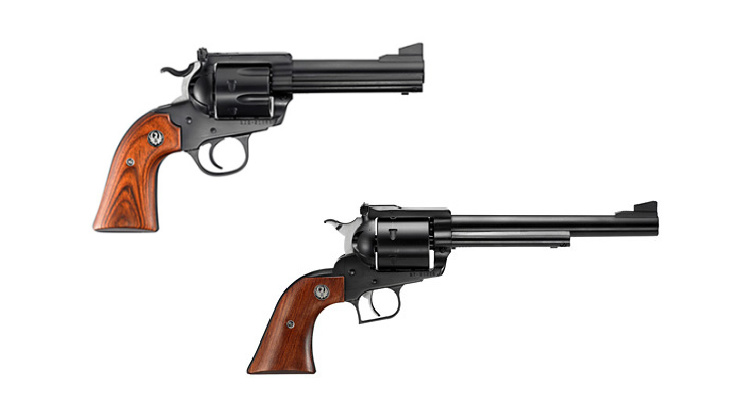 The New Model Blackhawk Bisley at the top and the Ruger New Model Super Blackhawk on the bottom.

To go with the big and bold Ruger, we need a big and bold cigar. Enter the La flor Dominicana Double Ligero Digger Maduro.

The Ligero in the name refers to a type of tobacco that is known for its full strength and strong peppery flavor. The Digger is the name of the size, and it is a monster at 60 ring gauge and 8 1/2 inches long. This beast is wrapped in a very dark and oily Maduro wrapper leaf. The binder and filler, including the extra dose of Ligero, are grown by LFD in the Dominican Republic. So go shoot a big gun, and smoke a big cigar. 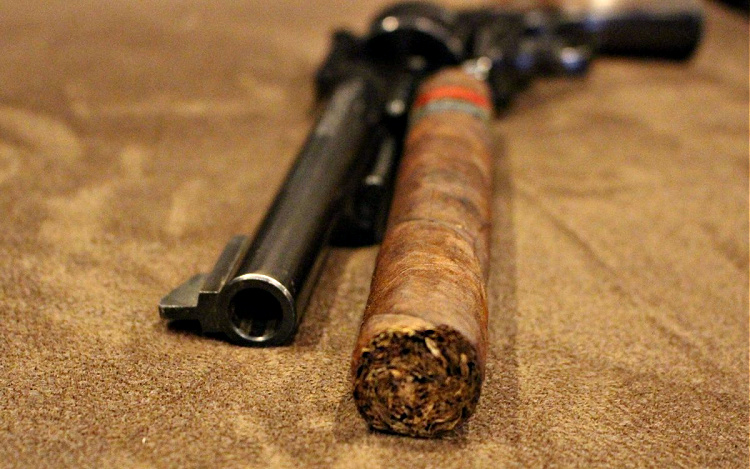 The LFD Digger is a full inch longer than the Ruger.

The Ruger Super Blackhawk 44 mag has a recoil that will rattle your grandpa’s dentures and put big holes in whatever is on the other end.

The La Flor Dominicana has lots of peppery spice, earth, and a hint of sweetness to bring a little balance. This is a very strong cigar, and a big one to boot. I suggest having a bite to eat before tackling an LFD Digger.