Binary Trigger For The MP5!

Following the popularity of their BFSIII AR-C1 Binary Trigger, Franklin Armory has come out with a Binary Trigger for the MP5. Actually it works with most HK style roller lock firearms.

I tested it in my Zenith MKE Z5RS and Omega Guns 9K. The Franklin Armory HK Binary Trigger only works in SEF style lowers. Which both come with the Z5RS and 9K. The trigger parts are similar to an AR15 shoved in to a metal trigger pack. Franklin Armory also includes a right side safety selector turning your MP5 into an ambidextrous lower. One minor issues for people buying this is that it is lacking in three parts. The ejector, ejector pin and spring. However these parts can be easily uninstalled from your existing trigger group and reinstalled into the Franklin Armory trigger group. Or you can buy replacement parts from various retailers/resellers. Swapping out the ejector is easy. Simply turn your existing trigger pack over onto the left side and use a small tool like an allen wrench or punch to push the extractor pin out. It is only held in place by friction. Now you can pull the extractor up and out of the trigger pack housing. Careful to pay attention to the spring below the extractor. You will need to remove the spring by simply pulling it up. Now transplant them into the BFSIII trigger housing. As I said above the HK Binary trigger works in almost every roller lock out there. You could easily install the trigger group into such guns as a PTR91 and HK 91.

Just like the standard BFSIII trigger, the HK Binary trigger has three positions. Safe, semi auto, and semi auto binary. In this mode the trigger will release the hammer when pulled and upon release after the bolt has reset the hammer. When using the BFSIII trigger in a standard AR-15, it is rather easy to pull and release the trigger too fast to get out of timing with the bolt. In some instances this causes a malfunction and you end up with a dead trigger. According to my contact at Franklin Armory, the BFSIII HK-C1 cannot have hammer follow.

Here is a video on Franklin Armory’s Instagram page.

His rate of fire is impressive.

I tried it but was unable to get a high rate of fire. Here is the HK Binary Trigger in the Omega Guns 9K.

And another test in the Zenith Z5RS

Is It All That?

There are some issues with the binary trigger. In the photos above you can see the Binary Trigger in what looks like a Navy Style lower on my Zenith Z5RS. This is a replica SEF lower in a Navy style. It has the smooth pistol grip and bullet pictographs. Regular SEF lowers simply say S, E, F. and have a molded grip that is not left hand friendly. Below is a photo of a stereotypical SEF lower. 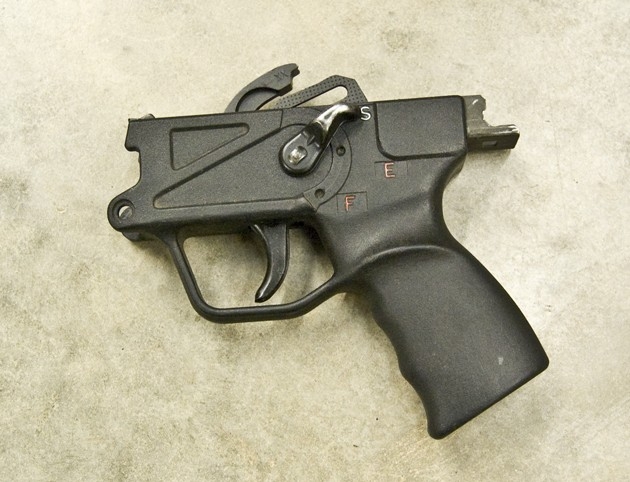 Most MP5 enthusiasts prefer the navy style lowers. However there is a caveat. The Navy Style ambidextrous lowers are not compatible with the Franklin Armour HK Binary Trigger. So if you have an MP5 with an ambi navy style lower, the HK BFSIII will not work in that lower. You will need an SEF lower. This is what makes my lower unique. I have the best of both worlds. SEF compatibility but the ergonomics and aesthetics of a Navy Style lower.

Another issue is the fact that the HK BFSIII is ambidextrous. The problem is the size of the selector levers. They are long and wide, so they interfere with my trigger finger. Franklin does include a safety delete but now you no longer have an ambidextrous safety. I have been told Franklin Armory will be making shorter selector switches to address this ergonomic issue.

The other concern with the Franklin Armory HK BFSIII trigger is the price. On Franklin Armory’s website the BFSIII HK-C1 trigger sells for $699.99. That is $270 more than their AR binary trigger.  An ambidextrous safety for an SEF lower is only about $80. But an ambidextrous navy trigger group with polymer grip housing goes for about $700-$800 depending on which version you get.

Transferable full auto sears for MP5s are around $30,000 and up. In comparison to that, this is a much more affordable option. It is up to you to decide if a simulated two round burst is worth spending almost $700. I had a lot of fun trying this trigger out and am excited that it works in the MP5 Briefcase. Switching between the MP5 and MP5K is easy Just rotate the safety to 12 o’clock and pull it out the left side. After removing the safety delete or ambi selector of course. Then the BFSIII HK-C1 trigger group just slides right out and you can put it in another polymer housing.